'If I'm the smartest guy in the room, I am in the wrong room' 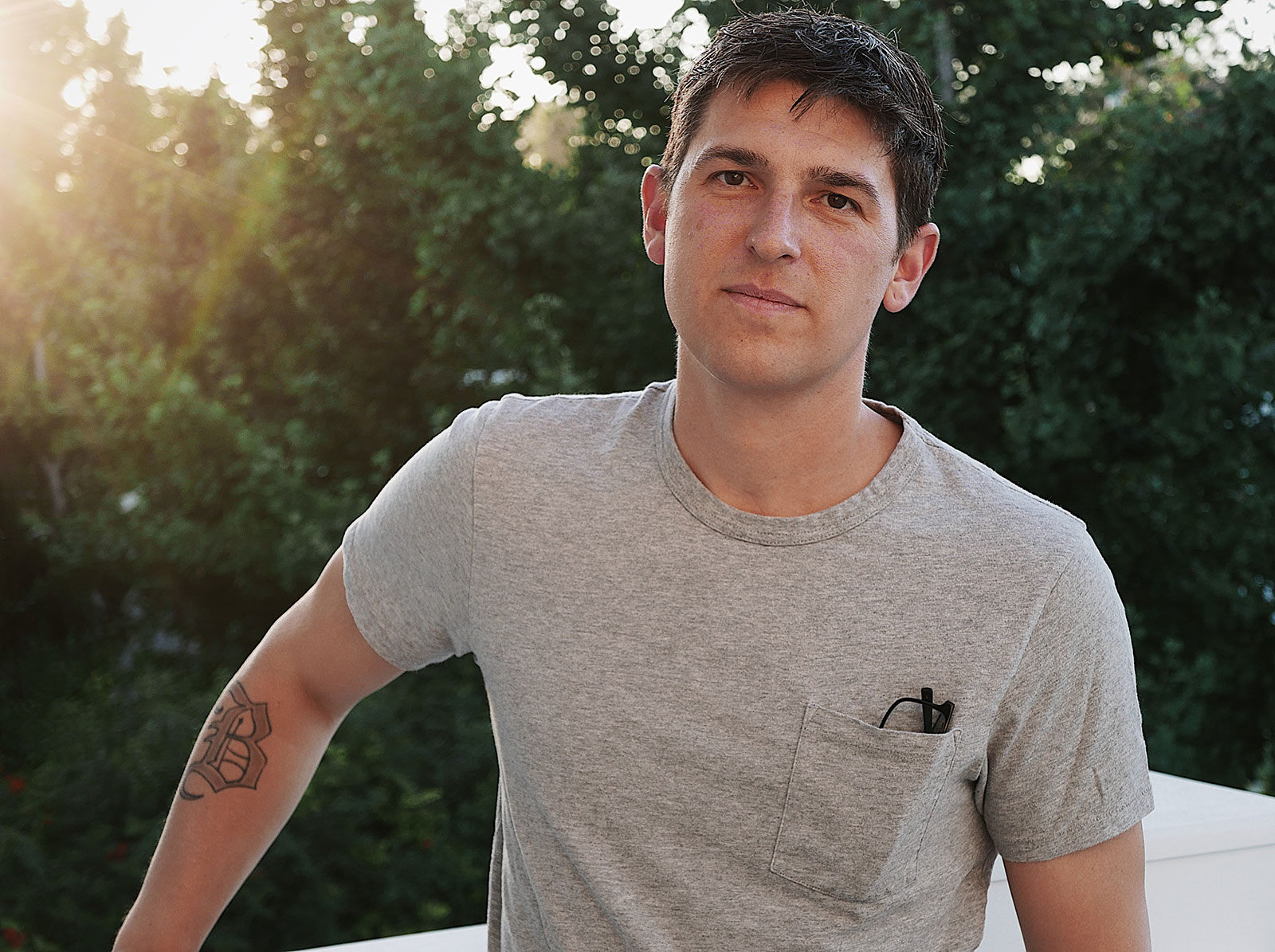 Reinventions profiles people who've made big pivots. Meet Biff Butler, who left music to do pretty well for himself as a film editor.

In my former life I was the singer in a rock band called Apartment 26. The name came from an obscure reference to David Lynch movies, and we later got his blessing to sample a song he'd written, which I count as my first foray into the filmmaking world.

We signed a record deal fairly soon out of high school, and eventually released a couple albums. Looking back, this period served as a substitute for a college education. However, unlike other people's college days, evidence of mine can still be found on Google and Spotify. This was a time of both enjoyment and struggle, being teenagers who ran a business and managed a "brand"—not that we did much of that particularly well, mind you—but got to travel the country doing so.

I still vividly recall seeing the movie Se7en at the cinema, and just being floored by the opening credits. The way it was all pieced together, I remember feeling "I want to do that." People often harp on about storytelling, but to me the goal should be to make the audience feel something, which this certainly did, before the movie even began.

I had also grown up a fan of basketball, of Michael Jordan, and inevitably was interested in the commercials of the time, as well as the music videos of the '90s. I knew that eventually I wanted to play in that world, but it was always on the backburner until our band broke up.

During my time in the band I would photograph or video the goings-on around me, and play with the visuals and audio on a computer, much in the way our music was recorded. It hadn't occurred to me that this was a job you could have.

Once we split, I figured I'd go to film school, but a friend of mine had been a receptionist at a place where, as she described it, "All they do is editing!" So I decided to try to get a job there while applying for various schools.

I showed up to a place called Rock Paper Scissors, which, it turned out, was not only a place that did in fact "edit" but had helped create some of the most iconic pieces of work I'd loved growing up, from Nirvana's "Smells Like Teens Spirit" to Gatorade's "Jordan vs. Jordan" spot, and yes ... the Se7en title sequence.

I told them I'd like to work there while saving for film school. My new boss told me, "This is film school," and off I went, fetching coffees, making tea and plating sushi for directors I could only dream about meeting, let alone shooting the shit with them during late-night edits.

There's something very different about creating art for yourself—music for an album, say—as opposed to being of service to a director's vision, which in turn is in service to a creative's script, which is in turn in service to a brand's marketing strategy. When thinking of it that way, it's a bit exhausting. And although I can't identify with this even being an obstacle, there is a swallowing of the ego when you've gone from being the artist to being the lowest rung on the ladder. There is also a lot of money riding on the projects, so the responsibility and trust put in us was something I came to respect right away.

Not being too precious or protective over my work, being open to criticism, and understanding the collaborative nature of the process. Coming from a band structure, I operate best when allowed to create openly in conjunction with generous collaborators. I have grown to find that it is often my role as editor to maintain this openness between the director and agency, or even among members of the agency themselves. Dealing with conflict, navigating a collection of egos, giving good ideas fertile soil in which to grow—these are all skills I learned as a member of a band.

One could use a sports analogy here, too, but my hoops skills aren't quite up to snuff for that.

The first thing that springs to mind is the notion of always being of service—to your project, to the craft, to the client, to the director. At the same time, I am reminded of one of the first lessons I recall being taught, which is that we are hired for our opinions. I used to be shy to speak up and disagree, or to propose something to an established director or creative director, until my EP told me, "That's what they're paying you for!"

Fundamentally, though, the biggest lesson I learned is to maintain my own sanity and not get too caught up in my own head. I joke that keeping myself in check is at least 70 percent of my job—keeping out of the way, retaining the "beginner's mind," and not taking things personally, be it success or rejection.

Lastly, and maybe most usefully to others, I should mention the late, great Frank Budgen, who advised me, when we were discussing how he became a director and my own desire to do the same, to "just go do it." You really can't wait for the opportunity. If you want to edit, edit. If you want to write, write. Do what you love, with love, and people will take notice.

I am inspired by those around me, by the members of my team on any given day, by the clients I serve, and the other talented artists we partner with—VFX, sound design, etc. I adhere to the principle of, "If I'm the smartest guy in the room, I am in the wrong room." I enjoy being slightly intimidated by my co-workers and collaborators, then feeling like I have to prove something. There is always something to learn from every interaction, every project, and hopefully I am able to teach something along the way too. At the end of a job, I want our clients to think "They did a great job," more than "He did a great job," as it's the collection of our abilities that brings the work to life.

Every day has the potential to be as exciting and fulfilling as the last. In the time it's taken to answer this questionnaire, I met a couple young exciting directors, lost out on a job I thought was mine, and got requested by a director in London I've wanted to cut with for a long time. All while on my first cup of coffee. OK, maybe my second.

Point is, anything can happen, and some pretty farfetched stuff has happened, and it's really a result of the collective. I am driven to not only go further in my own career, but participate in the growth of the company I belong to, and assist in the growth of those around me.

No, I don't see myself making music again in a traditional sense, but I do get to collaborate with one of my former bandmates, Andy Huckvale, a lot. He is a renowned composer in his own right, and our shorthand is stronger than ever. I can often just describe a spot I'm about to edit, and by the time I've put together a first assembly, he has already created an audio bed that perfectly suits the mood we are trying to capture.

To me, the clients on the sofa are comparable to an audience at a rock club, and oftentimes the edit session feels like a form of improvised performance. This more than quenches the thirst I may have for the old lifestyle, and I really like having a desk.

"My 1st Song" by Jay-Z. If I'm ever feeling doubtful or ungrateful or just tired during a long project, I play that nice and loud.

This has been a mindset I continue to hold dear. I do not believe in keeping awards or trophies in my office, for example, because they have nothing to do with the task at hand. I approach work as though it's the first thing I've ever cut, even though I carry the learnings of many hours spent at the keyboard. A lot of what I do is now second nature, but if it became routine, I would soon become a very uninspired collaborator. This comes in extra helpful during a job especially, as we watch the same 60 seconds over and over, but must retain the perspective we had during that first viewing.

There's a lot of talk about "imposter syndrome," and this is actually something I embrace. We are imposters, all of us. The clowns are the ones who think they know what's up. I believe that if you go into a situation with an empty mind and an open heart, you will be granted far more exciting outcomes. Creativity is a matter of discovering, and you really can't discover everything if you already know that answer, now, can you?

I am an editor and creative partner at Work Editorial, an independent editorial company with a roster of some of the most talented editors on the planet. Somehow I have three Emmys, some Clios and other things, four kids, and hopefully many years ahead to keep playing the game.