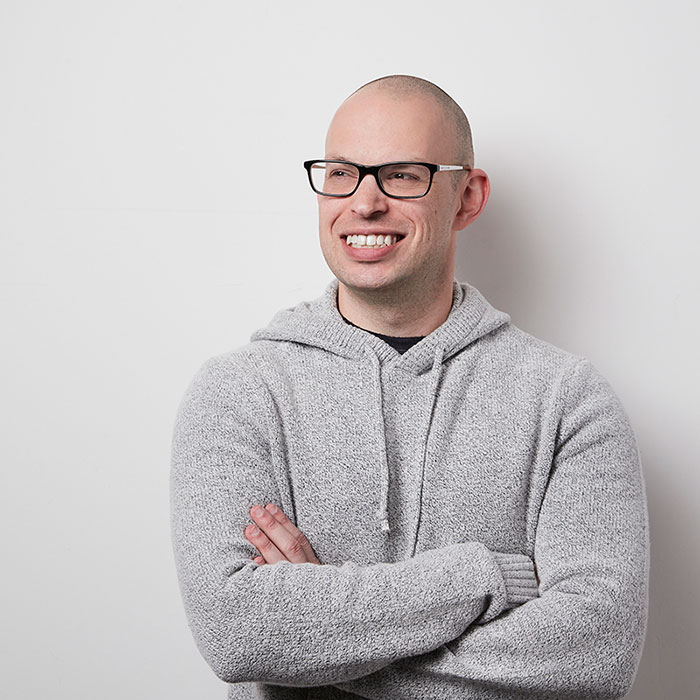 In my past life I was a creative director, with a portfolio ranging from K-Y to Coca-Cola, and everything in between. It had its highs (getting choked out by an UFC belt holder on production) and its lows (less of a 9-5, more of a 9-10:30).

I hated seeing good ideas die over and over because they weren't being sold well. In a pitch, it's not the best idea that wins; it's the most persuasive argument. As a creative, you're taught how to generate ideas, how to build on them and make them better. Nobody teaches you how to actually sell them.

I spent the first half of my career as the world's worst presenter. I spent the second half as a really good one. But that led to a different kind of problem: I was being asked to pitch constantly. Very flattering, but I'm just one guy. Along with those client meetings, I needed to find time to review work, write scripts, and do any one of a hundred other things (like pee).

When my early attempts at cloning failed, I moved on to the next best thing: a course for pitch and presentation skills that I could run for co-workers.

I sat and wrote out everything that I thought went into being a good presenter. Then I built a syllabus, picked four victims co-workers, and started teaching. It wound up working well. Really well, in fact. That first syllabus got passed around, and I started getting calls from people asking, "Can you do this for us?"

I've always loved teaching, and was tired of putting my family second to my career. It was a huge decision to make, but ultimately not as hard as I expected it to be.

I wasted a lot of time trying to be perfect. I thought if I worked hard enough, revised enough, that I'd suddenly look at the business and my crippling imposter syndrome would say, "Now it's ready." But that's a myth you tell yourself. An excuse to procrastinate. I was ready before I even left my job. People were literally asking me to coach them. Clearly my business's not-quite-perfect status wasn't bothering them.

Now I have "Don't wait until you're ready" written on the whiteboard in my office. Right beneath it is "Don't forget to pick up almond milk." Words to live by.

The actual coaching. I steeled myself for nightmare clients—people who wouldn't put in the work, who would argue, or who would view coaching as a punishment inflicted on them. But that hasn't really happened.

Sure, some people don't do their "homework" every time, but I still see breakthrough moments and transformations, even in those clients. On the whole, people are incredibly grateful for the coaching, and I'm just as grateful to them.

If you don't have people like that, go find some. They can be co-workers, best friends, or people you've met only on Slack groups. They can't be stuffed animals, though. Mr. Bear is a wonderful confidant, but he's not gonna tell you you're being too cautious with your rates.

Bruce Lee. No, seriously. He developed his Jeet Kune Do style by incorporating elements of dance, fencing, boxing, and more. Obviously the foundation of my coaching comes from my agency experience. But if you're going to pitch an idea, there are a lot of things worth stealing from the worlds of comedy, professional sports, acting … even children's books and jazz. Just because most agencies have pitched a certain way for years doesn't mean it's the only (or best) way to do it.

I get to help people directly now. As a creative you're helping your clients, but that's just a side effect of helping the brand they work for. Now I get to look my clients in the eye, and everything I do improves their lives directly. It's pretty cool.

I don't think I could ever leave advertising completely. I love writing, concepting and solving brand problems. I still freelance when I have time, to make sure the skills I'm teaching are still relevant (especially in the era of pandemic presenting). But as far as that 9-10:30? Not sure what it would take for me to go back there right now.

It's either "The Other Side" from The Greatest Showman or "Remember The Name" by Fort Minor. That single sentence probably says more about me than all the rest of this put together.

I coach creatives to pitch and present better so your agency's best ideas get made. Distilled from over 15 years of creating and selling award-winning ideas, my approach has helped everyone from interns to executives. If you want to stop selling your "second-best" ideas, deepen your bench of client-facing folks, and conquer your Zoom slump, find me at SellitGreat.com.