How Regi Cash, Finance Star, Caught the Wave of Entertainment

'Whenever I have big transition moments in life, I like to spend some time in the ocean' 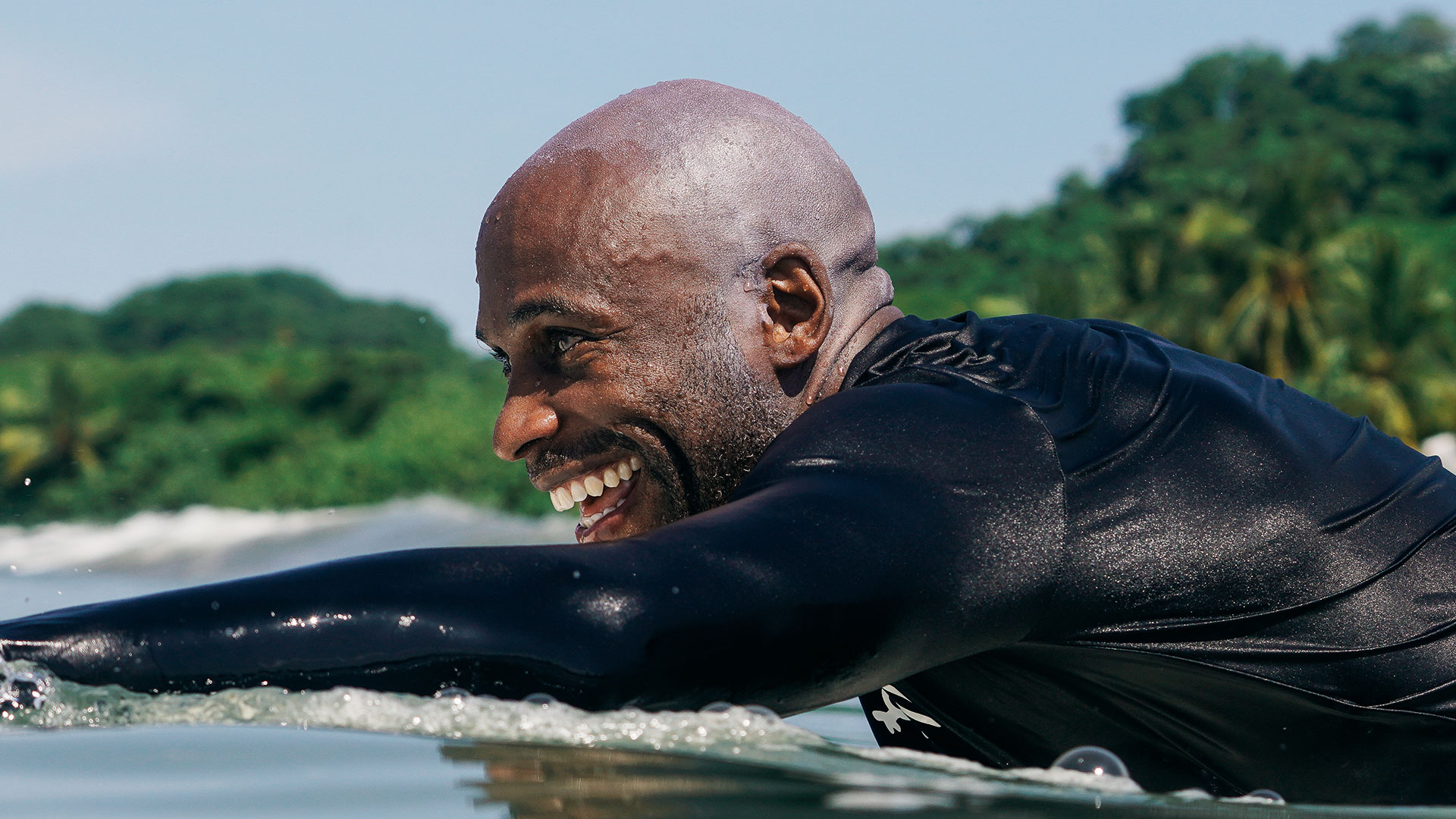 I spent the first 10 years of my career in finance. I worked for two large European investment banks—UBS, then Deutsche Bank. When I left Deutsche Bank, I was head of investor relations in the Americas, but spent my last year living in Frankfurt, Germany, and was the de facto global head of the team.

Finance is one of the greatest educational careers in the world. Any good investor or trader is a futurist. I learned to be more concerned about where things are going than where they've been or even where they are now. I learned to quantify risk that I didn't even know to consider before. And I learned the importance of timing. Knowing the pace of change is just as important as being directionally right. The first time you try to combine all of these into a singular view point or an opinion is probably akin to a professional sports player describing how the game slows down.

I loved finance but always knew it wouldn't be my lifelong career. I had a handful of experiences prior to finance that portended a career change and a non-finance future. Prior to starting my career in finance, I would organize and promote parties while I was a student at Columbia University. To me, I was always going to chase the thrill I got from pulling off a successful event: the right crowd, the right music, the right promotion, all culminating in indelible memories, was always a high for me. I also was incredibly fortunate to intern in the marketing department for Def Jam in the early 2000s at a time when that label was shaping the music culture—Jay-Z, Ja Rule, Method Man and Redman. I was also exploring an interest in fashion and apparel and took night classes at Fashion Institute of Technology (FIT) in New York.

What weaved all these things together was a desire for artistic and cultural impact. I just always knew I wanted to be closer to either responding to, understanding or driving culture.

There's a higher bar when you're crafting entertainment experiences. The goal is always to create a lasting impression, to leave a mark on someone's timeline so they come to associate a memory with a moment that I helped craft and shape. In this way, entertainment is a form of transcendence. I always wanted to thrill or excite or alter perspective. I just happened to be really good at economics and math, and got swept into the world of finance before I could take a step closer to something that aligns more with a lot of my original explorations and interests.

Surfing. Whenever I have big transition moments in life, I like to spend some time in the ocean. There's something about surfing that's wonderful in providing perspective. Riding a wave is about having just enough foresight and control to catch the wave, but afterwards you're simply doing your best to respond to the unpredictable nature of the ocean. There's a certain humility in understanding the slightest mistake puts you at its full mercy. Even at your best, the wave always ends. Every great wave ends and the next one will be different.

I say this because whenever I make a life-altering decision, it's important to understand the purpose of the decision before taking action. When I quit my first job in 2010 after six years at UBS, I was probably one of their youngest-ever directors and on the fast track to success and wealth. I thought I was done with finance then. I was surfing in Costa Rica when I got a call from Deutsche Bank about a different opportunity. It wasn't my time to move on yet. Change is always undoubtedly more difficult than I anticipated.

Being at peace with my own "why" keeps me from looking backwards when things get turbulent. The first steps for me are always to turn inward. Do nothing and turn inward. When I returned from my surf trip in 2011, I calmly resigned from my job because the wave had come to an end. The next wave wasn't on the horizon yet, but I was sure it would come.

Learning to talk to talent. I had all of these images about what it's like working with talent—actors, writers, directors, digital creators—that probably came from old Entourage episodes. I thought it required a lot of gassing and fluff. At first I was really nervous about my ability to hold these conversations because this isn't my personality. What I found is that there's an element of this, but what I didn't know was I could choose who I want to pitch.

The people I like to work with are serious about leaving a mark. Whether I'm recruiting a director for a script, a designer for a fashion collab, or a digital creator for a brand collab, I'm excited by people who are more focussed on the art than the publicity. Some talent ask tough questions and sometimes they are immediately thinking about the impact the work is going to have on the viewer or the purchaser.

Understanding the creative. Going from finance to any other industry, the creative demands are going to be a lot greater. In my role, my job is twofold: surrounding myself with world-class storytellers who can communicate in any medium, and understanding and believing my creative perspective has just as much merit as theirs. I create or curate from a place of emotion. I've always asked myself what's the emotion I'm trying to convey, what is the set of feelings I want to inspire in someone else? I think when creating from a place of integrity, it's easy to tell when something works and why or why not.

I started out with a lot of assumptions about entertainment. I told a friend of mine who was in the industry that I wanted to come out to L.A. to learn the business. He didn't need to pay me. I'd contribute to the things I could and add value where I could, but mostly just wanted to hear the conversations and get a sense for the pace of things and the industry.

I've always been inspired by Jerry Lorenzo at the clothing brand Fear of God. I remember I was living in Germany in 2010 and all of the kids there I was hanging out with were so heavy into this aesthetic and I was embarrassed that, being from New York, I was completely ignorant of the movement he was building out of L.A. I was always impressed by the integrity of his vision with the clothes he was designing. It felt purely American in that the Fear of God aesthetic comes from an experience you'll only find here. It's our postmodern, remixing sensibility that keeps our culture and our art at the forefront of culture globally. I'm always inspired by creatives like Jerry who have the audacity of integrity.

Understanding the source of creativity and the source of inspiration is most powerful when it originates from an experience that you know well. That's in sharp contrast to my days in finance, when it's commonplace to reduce experiences to numbers. When I think about some of the creatives I look up to—and I put writers, directors, musicians, fashion designers, athletes, fine artists all in the same bucket as creators and draw from them equally—they always start with a belief that their offering to the world is unique and deserves an audience.

No. I don't think I could go back. I'm having too much fun. I get to apply a lot of what I've learned from finance about strategy and economics and creating business value, but there's an entire other dimension, which is about inspiring people. The combination is too rewarding to give one of them up.

I spend so much time with my head in music. "Renegade" by Jay-Z and Eminem always resonates during times of transformation. It's a lyrical masterpiece of America's love-hate relationships with culture; we often vilify the messenger when their experience and expression challenges what we want to believe about ourselves, but the irony is that only through being a renegade, and shining light on some of these uncomfortable experiences, can we progress and move forward and achieve the collective imaging we were trying to protect in the first place. There's a powerful role for art and entertainment in that process.

I'm the CEO of 3BLACKDOT. We're a 70+ person entertainment studio based in L.A. I now spend my time developing, producing and financing entertainment experiences—including merchandising and brand integrations—that are true to millennial and Gen Z life experiences. 3BD is the parallel infrastructure for the creator economy.