George Eid Exits One Stage to Enter Another

His journey to digital, 'where expression happens through interaction' 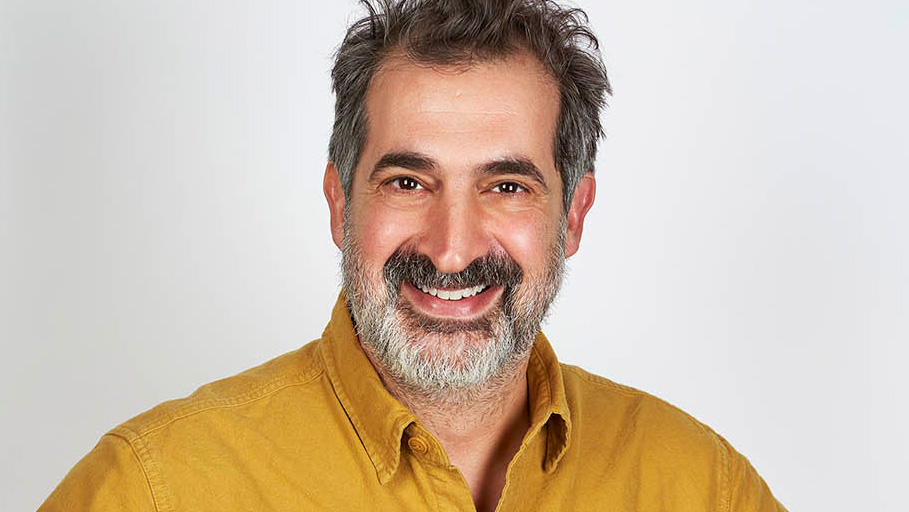 Reinventions profiles people who've made big pivots. Meet George Eid, who's made a few stage-left exits: from theater to film, and finally to the internet.

I've never been one to follow conventional paths, and my career trajectory is a case in point. I began working as an actor at an early age, then got my degree in theater directing (and studio art, for good measure). I started a theater company with friends out of college, where we collectively wrote, directed and acted. At the same time, I started a restaurant with my brothers; it's still going, 30 years on.

From there, I transitioned into filmmaking and produced several films, including an award-winning documentary on the Palestinian-Israeli conflict.

But there was always a duality to my career. While I pursued various artistic and creative endeavors, technology was a consistent throughline. I was introduced to my first computer in 1982, and by the mid-'90s was getting paid to build websites. Freelance projects turned into full-time creative director roles, leading enormous projects for enterprise organizations.

Yet at the time, I saw the web as my side hustle, a way to make ends meet as I turned my passion into my paycheck.

It was the fall of 2001, and my film career was on the up and up. My documentary was about to premiere, and I just wrapped production on my first feature-length fiction film. Then 9/11 happened. The premiere was canceled indefinitely, and my feature was canned. It was a black comedy about terrorists … talk about lousy timing. Audiences were not in the mood to laugh about terrorists or speak about peace in the Middle East.

With my schedule clear and my film career in limbo, I turned my attention back to the internet. I learned of a pitch for a major website redesign and decided I had nothing to lose. Using the name AREA 17, I entered the competition and ultimately won the project. At the time, I didn't realize the impact this would have on my career trajectory.

In a matter of weeks, I had to put together a multidisciplinary team to design, build and produce a huge website. It was a whirlwind, but no matter how chaotic the situation or challenging the problem was, it felt uncomplicated. I was engaging in a new kind of creative ecstasy, and it felt like a natural extension of my theater and film work.

As the year progressed, I started to see the internet as a possible career progression. I moved from one stage to another in my early career, from theater to film. The medium changed, but the mode of expression remained the same: language and imagery. Now I could move to a third stage, where expression happens through interaction—a stage for dialogue, where interactions speak louder than words (and images).

By connecting people and giving free and open access to knowledge, the internet promised to increase people's freedoms, opportunities and well-being.

This third stage was being shaped by all who contributed to it, and my previous pursuits seemed inconsequential in comparison. I was energized and eager to participate at a deeper level. I decided to follow my inspiration as it changed course, and in 2003, I incorporated my agency, AREA 17, and set my sights on this thrilling new path.

I had been on the same, if not weaving path, for most of my life. Nothing scared me more than to leave it. Days after incorporating, the gods started to taunt me. My documentary started to be reprogrammed, and I was invited to film festivals worldwide.

In a matter of months, the film won the best documentary at several international festivals, got a theatrical release in New York, and was programmed for television. In the glow of success, everyone kept asking, what's next? Grinning like a Cheshire cat, I'd reply, "The internet, my friend."

I love creating as an ensemble. Whether as part of a theater troupe, film production or a digital product team, I'm in my element. Sure, being dependent on others can be scary, but you experience the purest form of community with your co-creators when you find your flow together.

If you give people the space to do what they want to do, how they want to do it, extraordinary things happen. As a leader, you should ensure your team's autonomy over their task, time, team and technique. By allowing each contributor to show up as they are and put their proverbial signature on the work, they take full responsibility for its success.

I had the honor to partner with Arnaud Mercier, one of the leading interactive designers of his time. We banded well together and shared many of the same ideas. Arnaud became my partner in 2005, and together we built a world-class agency. His life was cut short in 2011, shortly after he was diagnosed with leukemia. But he left us an extraordinary body of work that illustrates how one can pierce temporality with timeless principles.

Not much. To quote Henry Miller, "Paint as you like and die happy."

Sure, but not as a career choice. I translated a short play into French a few years back and performed it with my sister-in-law. It was super fun. I'd prefer to write a book, then make a film again.

"The Mercy Seat" by Nick Cave.

Nearly 20 years later, I'm still the CEO of AREA 17. I continue to believe in the internet's capacity to enhance our lives. But as it becomes more pervasive in our lives, I also see the massive challenges it has introduced.

Today, I feel an even greater sense of responsibility to ensure a more open, resilient and optimistic world. This mission energizes me, and I'm fortunate to work with clients who share this vision.