Abhish Desai's Long Journey Out of Tradition and Into Creativity 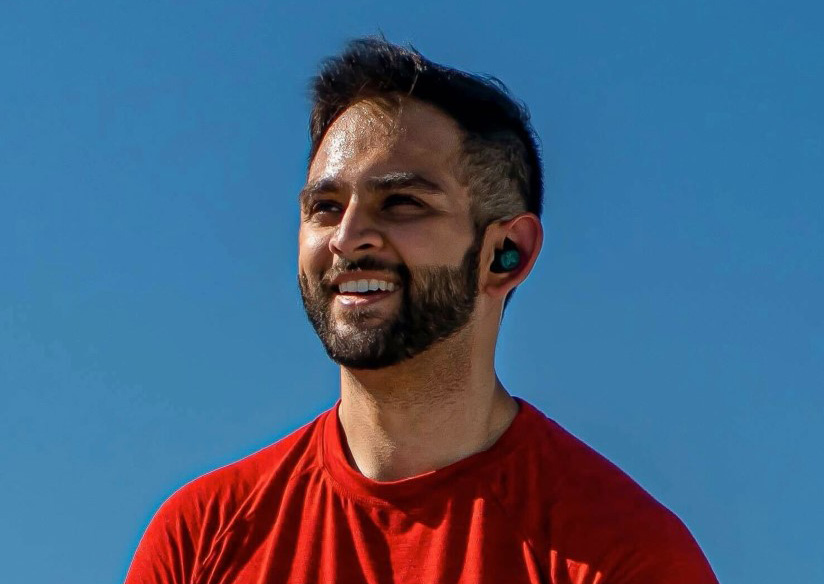 I started off my career on a traditional path, as a law school graduate. However, throughout my law school career, I discovered I had no desire to practice law, nor was I particularly happy on that path.

In my second year, I decided I wanted to get back into shape, focus on my mental health and work on my overall self. Through that process, I started posting on Instagram. At first it was simply to inspire others in a traditional field to focus more on themselves, but eventually it became more, and within the next four years, I became a content creator with a combined social media following of over 500,000.

But I knew I still wanted to do more.

Some might say I have reinvented myself twice! As I mentioned above, I was not particularly happy in the field of law. And as the years have gone on, I became more comfortable talking about why. I always wanted to be in the creative field, but due to generational traditions and my background, I was influenced into choosing a traditional field that either involved medicine, law or business. Out of the three, I reluctantly chose law.

Through the first year of law school, I found it hard to focus. I realized more and more I did not want to be in that position, and wanted to somehow break free of it. After the first year, I entered a very serious state of depression where I had unhealthy drinking habits, sleepless nights, massive weight gain and an overall disdain for life. There was a singular moment in time where something in my head decided to say enough is enough, and that day I decided to make a change. I quit drinking, I lost 50 pounds, and I started on a healthier and happier path.

More recently, I pivoted from the content creator space into agency life by taking on the role of creative director with influencer marketing company The Social Standard. While not a 180-degree career switch (more like switching lanes), as someone who wants to continually grow and develop, I knew this shift was the necessary next step in developing my career. Why not utilize my expertise in social platforms and content creation to help market brands in bigger, more strategic ways?

There are two moments when I had to take first steps, first as a content creator and second as a creative director.

The first steps to becoming a content creator were surprisingly easy, because I loved what I was doing outside of my law school career. I went to class and finished all my law work as quickly as possible so I could spend every ounce of my free time working out, practicing and teaching myself photography, videography and editing. I stayed up until 2 or 3 in the morning most nights learning on YouTube, and if I had the urge to practice anything, I would take the elevator down to the parking lot in my apartment building and film whatever I could until I learned what I wanted to. I simply focused on learning a day at a time and applying it. I worked for free for about two years before I finally saw my work bring in a paycheck.

After being a content creator for so long, I knew I wanted to do more and take another first step. I loved being an influencer, but I wanted to make a bigger impact in the industry.

I decided to do this. Taking on a role within an agency would allow me to put my creative juices and production skills to good use, creating quality content for others' brands. I threw myself into every project I could, and made myself readily available, regardless of how hard I would have to work or what my learning curve would be.

I was inexperienced, but just as I did as a content creator, I took the necessary steps to teach myself everything I needed to know to be a creative director, and believe being a content creator allowed me unique insight into what brands are looking for.

Lots of research, learning the ins and outs of the marketing industry from a creator's point of view, and gaining meaningful experience eventually led me to my current role as creative director with The Social Standard.

The hardest obstacle was convincing my parents that what I was doing was the correct path for me. Coming from a traditional Indian background, having a career in the creative field was not encouraged, and even frowned upon by their inner social circles. Reputation is everything to them, and what their kids chose as a career weighed heavy. As toxic as it may sound, it is the reality of the situation.

With the pressure from a conservative and traditional society, my parents were cornered. Here they had a child who wanted to sway from the norm they were used to, and they knew that it may cause judgment from others. Along with this pressure came the question, "What if he fails at this?"—as any rational parent would ask.

With this toxic cocktail of a situation, the hardest thing for me was convincing my parents it didn't matter how much money I made, or that I would have to work for free for a couple of years. It would all eventually lead to a prosperous career that I would be happy in. Once they understood that it didn't matter what anyone else thought, the transition was very smooth and they became my biggest supporters!

The easiest decision I made was also my career's defining moment. The second day of taking the bar exam in Georgia, I walked out halfway through. It was in that moment that I decided that I did not belong there and had no reason to be taking that exam. I failed by 30 points. I still sleep with ease at night, knowing that even if I had completed the exam and passed, I wouldn't have cared. I would still be where I am today. There were no regrets.

Playing the long game is vital. So many people in the creative field either get discouraged because they don't get what they want immediately, or pitch themselves without gaining the knowledge and experience necessary.

From the beginning of my creative career, I knew that if I positioned myself to hang back, learned what I needed to and focused on gaining meaningful experience, it would eventually lead me into a great career. I never rushed the process, I made sure that every decision I made had a significant impact along the way, and acquired every skill I needed to ensure I didn't have to depend on anyone else.

The one piece of advice I would give is to take your time building your career and don't skip corners.

Absolutely. When I first started working out during law school, I was following a workout program from Chris Hemsworth's trainer, Luke Zocchi. And because I was posting about my journey through that process, he noticed and reached out. He happened to be in Atlanta filming for Avengers: Endgame and asked if I wanted to work out with him.

Of course I said yes, and after the workout, we had a conversation that opened my eyes to possibilities I had suppressed for years. He inspired me to create, to love doing what I do, and to strive to live a happy life no matter what. He was the first person to lead me on the path I am currently on, and I owe so much to him.

My outlook on life has completely changed. I used to care so much what people thought, how I would be perceived by close inner social circles, and I would conform to what others wanted me to think and it made me miserable. I no longer live that way. Now I pursue what I perceive as happiness every day. I choose to not do things I don't have my heart in, and I always put my mental health and physical health before anything I do.

Absolutely not! I have never looked back once and asked, "What if?" I thank the universe every day for putting me in the position I was in so that I could make the decision that I did.

Now I am both a content creator and creative director, and being both of these things allows me to bring a unique perspective and take to my role within influencer marketing. Influencer marketing agencies know how to work with influencers, but great content creators truly understand what brands are looking for out of these relationships. Bringing these two areas together allows me to constantly tap into my creative side by molding what I have learned from my own social media career and perceiving it from a marketing centric point of view.

As a practicing content creator, I am also living the industry in real-time, constantly pushing the limits on my own social media, and learning from the industry.

What are the latest trends that might be useful for brands to tap into? What creative styles stick out the most, and what creators will fit a brand's identity and help get them the best results possible?