Last Halloween, service stations across the country jolted millions of consumers as they filled their tanks. On GSTV's nationwide network of pump-based screens, video host Maria Menounos morphed into a freaky, threatening dude via deep-fake technology. The segment hyped a hair-raising digital experience from filmmaker Jason Zada exploring the dangers of rampant data collection (and updating themes from his viral "Take This Lollipop" effort a decade ago).

"It was a flash of 'What did I just see!?' It got viewers buzzing," recalls GSTV president and CEO Sean McCaffrey. "As a national video network, we want to entertain and inform our viewers, while in this case also highlighting very real concerns."

McCaffrey joined the network at its 2017 inception, driving growth by developing snackable content for folks on the go, and enticing advertisers to come along for the ride. His road to the future runs through some 25,000 current locations—double the number at launch. By year's end, another 5,000 stations should come online.

With McCaffrey at the wheel, the network, which reaches roughly one in three Americans each month, "has transformed every area of the business, from the content experience to the depth and breadth of advertisers that partner with us," he says. "We've also solidified our product offering and improved the tech platform by which it's delivered. Every change was led and informed by listening to our audience."

For example, GSTV carries food hacks from So Yummy and music news produced by Live Nation and Loop Media because "those who fuel up tend to be on their way to eat or to a drive-thru, and many consumers are also listening to music in their cars," McCaffrey says. 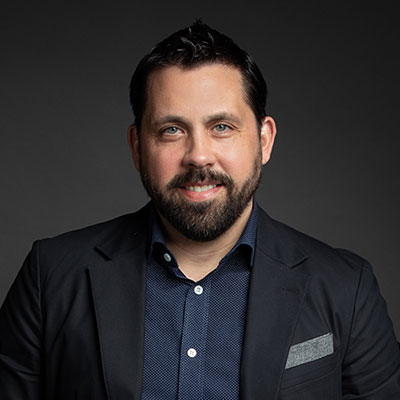 Shooting for the MoonPies.

"We don't consider ourselves parallel to other platforms out there," such as screens in taxis, trains and airlines, or Clear Channel Outdoor, where McCaffrey spent 16 years overseeing strategy, marketing and partnerships, he says. Instead, he views GTSV as a hybrid, fusing "broadcast's reach and scale with the targeting and measurement capabilities of digital, and the real-world opportunity of mobile and out-of-home media."

Because so many different types of people criss-cross our nation's roadways, the network can help brands reach commuters and travelers of varying ages, backgrounds and ethnicities "at a moment they are both paying attention to advertising, and on the path to purchase," he says. "We work with partners to message at the lower end of the funnel with calls to action directing viewers to a drive-thru or convenience stores—and at the higher end of the funnel, for low-frequency buys, like auto or financial purchases, building affinity through a routine weekly engagement."

One such low-end play took place on Super Bowl Sunday in 2020, when MoonPie and creative agency Tombras ran an 80-second commercial, reaching GSTV viewers as they picked up snacks for the game. Fittingly, part of the spot was set at a filling station.

"It got a lot of buzz because people thought it was a fun, irreverent idea—but for me, it was important because it was such a smart idea," says Tombras creative chief Jeff Benjamin. "We could have spent a gazillion dollars running a Super Bowl commercial on television, and it would have run for 30 seconds, one time during the game. Instead, we got so much more value running on those pumps."

All told, that campaign generated 5.3 million impressions in a single day.

"It cost less [than a Big Game buy], and we were able to engage with consumers over a much longer period of time," Benjamin says. "Plus, the audiences were steps from convenience stores, where MoonPies are sold. There was a dramatic sales lift on game day and for a period after that."

While entertainment is key, the network's screens also broadcast critical information in times of floods, fires and natural disasters. "GSTV was a network situated on the essential front lines alongside our retail partners who never shut down and served as an essential source of fuel, food and information," McCaffrey explains.

At the height of Covid, GSTV delivered messages from the American Red Cross, the U.S. Centers fro Disease Control and Prevention and Feeding America, among others, while also thanking UPS workers and other front-liners for their service.

"GSTV has been instrumental in helping to extend the reach of our CDC PSAs in the OOH market, particularly during the past year," says Liz Johnson DeAngelis, the Ad Council's VP of growth and managed platforms. "When Covid first hit, they helped distribute life-saving messages around staying home and social distancing."

At the same time, the service has expanded its partnership with the National Center for Missing and Exploited Children to share images of missing kids and help build a robust alert network with retail partners. "We know that recoveries can often happen at or near fueling and rest stops," McCaffrey says.

Driving into the future.

Of late, McCaffrey has shifted GSTV's own profile into higher gear. In March, for example, the brand joined with Muse by Clio to become the presenting sponsor of Tagline, a podcast that tells the stories behind legendary ad campaigns.

"One of our goals is to work more closely with creatives and creative shops," McCaffrey says. "We're a network that is poised for creative storytelling in a unique consumer context. We believe we are one of the increasingly few places you can get real reach and be in the 'right place, time and moment' … and without skipping, blocking and interruption."

Reaching "ad nerds"—passionate folks at agencies and brands on creativity's cutting edge—is essential because GSTV views itself as a robust resource, capable of real innovation. Wild ideas and bold directions—such as "Take This Lollipop 2" and MoonPie's Super Bowl spot—are welcome, if they work across the three to five minutes users typically spend filling up, McCaffrey says.

With summer fast approaching, and the U.S. emerging from the pandemic, McCaffrey's 2021 plans include a renewed push for vacationers' attention with GSTV's "Great American Road Trip" series, a wide-ranging celebration of travel and discovery, produced in-house.

"The series has integration opportunities built in for clients and opens up natural opportunities for brands and categories that contribute to a memorable road trip—travel and tourism, of course, but also QSRs, CPG, automotive, etc.," he says. "Our team is always looking for the next great creative campaign, and we want to be a partner in helping clients explore and push the boundaries on the possibilities with our network."

Every day, millions of Americans get in their vehicles and go. Fueling drives commutes, commerce and connection; and that's when we have the undivided attention of 1 in 3 adults every month. GSTV's national video network owns a unique moment for innovative storytelling, when consumers are engaged, receptive, taking action today and influenced for tomorrow and beyond. Fuel your next campaign with us. For more about GSTV, visit the company's creative hub here on Muse.