Neil French Taught Me Copywriting With a Single Ad

A long-copy classic for AirAsia

Right now it's sitting in some Brooklyn warehouse, bubble-wrapped and Singapore-bound, but normally a framed AirAsia print ad hangs above my toilet. This is a place of great distinction. I tend to reserve bathroom real estate for the bits of decor that reaffirm something pleasant, like an actress who keeps her Emmys next to the tub.

Only in my case the pick-me-up is a piece of commercial marketing for an airline I've never flown, created by a man I've never met, intended for an audience other than myself.

It's a little perverse. But the ad is just so good.

It sports no logo, no tagline, and no graphic other than its red and black type. Running 328 words, it doesn't try to persuade the reader of anything so much as it prosecutes its case, methodically leading you from assumption to revelation in the span of a five-paragraph essay. It is witty, authoritative, and a bit rude. It flows like a syllogism and sells without seeming to.

In other words, it's an ad by Neil French, the former bullfighter, rent collector, pornographer, copywriter, and irrepressible self-mythologizer who remains one of the industry's all-time talents. 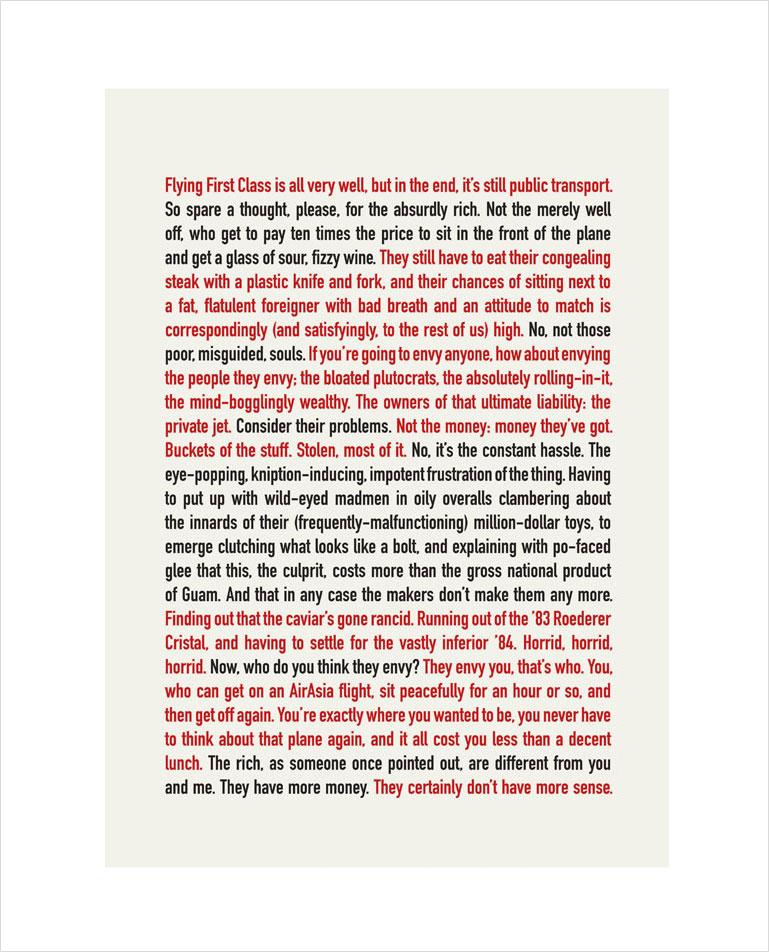 French wrote the ad at the zenith of his career, when he reigned as Ogilvy's worldwide creative director from his perch in Singapore, the same city I'll soon call home. That may explain the copy's worldliness (and weariness). But its bluff tone is what gives the ad its credibility—the Brummie voice, located at the business end of lit cigar, confirming your every suspicion. "This is how it really works," says the voice. And you can't help but believe it.

That voice, of course, is Neil French's voice. In The Copy Book, French admits to never adopting the voice of the brand. Even if he wanted to, he couldn't do it. "I'm always me, chatting away on behalf of the client," he writes. French considers himself a salesman, not an interpreter, and his work sparkles with the personality of a man who knows he is interesting enough on his own.

Compare that to the strained posture of most branding, which springs for any positive attribute: transparency, accessibility, cleverness, knowingness. Call it the jungle juice approach to marketing; it hammers you into submission. It tastes like everything and nothing. French opts instead to pour you something formidable but specific—a peaty scotch—and it's the only drink he makes, but the memory of it lingers.

His specificity is essential. The wry, faintly contemptuous voice, the meaty phrases like "kniption-inducing"—they ground us in something stable as the copy careens from perspective to perspective, fluidly switching allegiances. The ad, when you think about it, is unlike almost any other ad. It has no fixed point of view. Its argument actually evolves as you read it. That's because French isn't just tossing off the benefits of AirAsia.

He's serving up a dialectic.

His message comes in three parts. First the ad says you should envy people with money; then people with time; then people who conserve both money and time. Thesis, antithesis, synthesis. It brings you full circle from where you started, but leaves you with a fresh outlook when it's done.

You're rolling your eyes. Fine. You don't need to have almost failed German philosophy to appreciate it. French himself would probably be horrified by my overanalysis. And yet, that's the beauty of this ad. Like the best of anything, it rewards revisits.

Few ads can make that claim. Usually once you get it, you get it. Even the smartest copy yields diminishing returns. But French didn't just write an ad; he wrote a goddamn treatise. The client's name doesn't even appear until the bottom quarter, and it hardly matters because by that point you're so ready to say yes.

I can't think of an agency that would create this today, or a client that would run it. It's just too eccentric—it gets away with too much. How can an ad for a cheapo airline reference the "frequently-malfunctioning" aircraft of billionaires? That makes the rest of us sound screwed. Today's account teams would quash all references to stolen money and bloated plutocrats. Its strategists would question the wisdom of appealing to discount shoppers with rhetorical sleight of hand. And its copywriters couldn't pull the thing off anyway.

Though in fact, the ad isn't very old. On his website, French mentions conceiving it for Tony Fernandes, who bought AirAsia in 2001—making this print the perfect example of a long-extinct trend, except it was written in the 21st century. 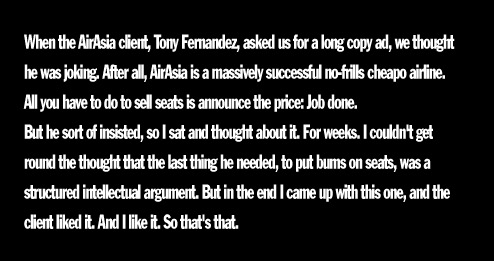 That's French. He traffics in paradox. He's an ex-pornographer from Birmingham who found staggering success on advertising's most cosmopolitan stage. He smuggles Hegel into the marketing of Malaysian airlines. His tweets alternate between thirsty and bone-dry. On the page, he's the most likable man in the world. But in person?

Having never met him, I can't say. But the truth is that charm doesn't suffice. French was excommunicated from the business following his rankly sexist remarks about women in advertising. To the younger generation, including me, his attitudes can seem hopelessly retrograde. He has spent his career, after all, assiduously cultivating the air of a roguish bad boy—and if there's one type the business can do without, it's that. Advertising continues to reckon with the vestiges of male toxicity. At stake is its very survival. It must wash its hands of men like French.

At the same time, I can't help but admire the man's words, his work, his ambition, his indomitable will. The brilliant strategies he brought to every assignment. The sheer number of creatives he mentored or influenced.

In a way, he made possible the next chapter of my life—Singapore, which until now existed at the frontier of my imagination. French shaped its creative landscape as much as anyone. I can only hope to learn from the men and women who learned from him. 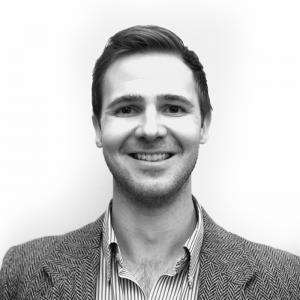