Me, Obsessed? It's Complicated

These are a few of my favorite things

Obsessed is a weird word. It seems a bit extreme. Who's really obsessed with anything, other than a crazy person? Yes, there are healthy obsessions, but that just means the rest of them are unhealthy.

I asked my wife what I'm obsessed with and she said, "Making sure all the correct lights are on or off when we leave the house." Yes, sometimes I'm particular, but obsessed? That seems strong.

Leonardo da Vinci was probably obsessed, and he did all right. LeBron is obsessed. That's working out for him. I have an Aunt Martha who is obsessed with puzzles, and she's getting a shout-out in a fancy advertising article.

My 12-year-old self was definitely obsessed with ninjas. I bought nunchucks out of the back of a magazine, took Taekwando for a year and a half, and have you ever seen the movie American Ninja? Obsessed.

I used the hell out of my SodaStream for a few months. But was I obsessed, or was I more infatuated? Or preoccupied? Or engrossed? Or hooked? I am bewitched with thesaurus.com.

There's a little bodega called The Tin Can that just opened up across the park from our office that I'm sort of obsessed with. And yes, there's a bodega in North Carolina, and it's absolutely not a convenience store.

I love clothes I can wear around the house and out and about. I call it At Your Leisure Wear, and I already own the URL. And I know most of the words to the Moana soundtrack, because I'm totally obsessed with my son.

I guess I'm obsessed with whatever is in front of me. It kind of comes with the job. We have a new obsession every day. Every hour. Every brief. Every sentence. Every syllable. We're never not obsessed with something. 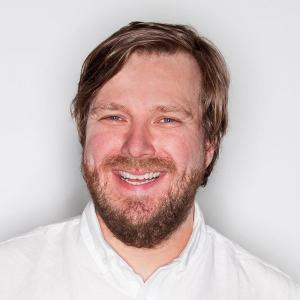 Scott Hayes
Scott Hayes has made a career of being obsessed without knowing it. After years at some of the most award-winning agencies in New York, he's now executive creative director of MullenLowe Winston-Salem in North Carolina. He'll never not stop.
More from Scott Hayes