My early experiments in animation and motion graphics

After selling my skateboarding lifestyle brand to K2 Sports in the '90s, I was working as a creative director for a number of the brands under their umbrella, often making the kinds of skate videos that were part of the culture at that time. We wanted to do something different, using animation and infusing graphics that brought a visceral energy and excitement to the action.

While these kinds of videos were getting a lot of traction, I wasn't content with just skate product design as the end-all, be-all of my career. I found myself getting more and more interested in breaking the mold and shaking up the creative process to craft something different, something more memorable.

While the title may seem like clickbait to modern viewers, the video was more entrancing than even the most eager viewer could hope for. It was the pure definition of the veritable "I wish I had made this" reaction, not only leaving me envious that I hadn't created something like this, but inspired to immediately infuse the new techniques and visual explorations I had seen into my own work.

Beyond being impeccably designed, the piece really pushed the limits of the technology available at that time, creating 3D animation with a 2D toolset. They were extrapolating pictures and animating them in 3D, which was really not done in that capacity before the advent of After Effects. My eyes had been opened to a dynamic new technique, and this was the first step guiding me in the direction of a career in animation and motion graphics.

Back in the early 2000s, the world of motion graphics was uncharted territory for me in my work as a creative director, with design being my main focus. I studied the format and visuals, and was able to rapidly become self-taught in designing for motion. This was when I first began experimenting with animation, using my artistic background to produce some unique motion pieces. After finessing my skills and vision through a number of experimental animations, I soon had the opportunity to create the opening sequence of MTV's Viva La Bam. From there, MTV kept coming back for more.

I found that motion graphics and film was the direction I had been seeking to expand my artistic vision and provide a new area of creative experimentation and discovery. Prior to this opportunity, I had made videos, drawn graphics—but had never worked in motion. The whole industry was fresh and new, allowing me to push the boundaries of advertising at that time. To accommodate these new animation projects, I opened up Shilo, the first iteration of the animation and motion graphics studio that later fused into ATK PLN. We were curious, and there was endless room to explore.

My dive into the motion graphics scene has been pivotal in shaping my artistic work. I was fortunate to discover it early on, and to watch the technology unfold into a staple tool in modern advertising. There's an undeniable excitement in that intersection of moving image, design and sound that transcends the bounds of pen and paper. I was able to expand my creative wings, and create my own artistic and directorial path.

I often think back with nostalgia to the creative freedom and exploratory process that came with that new territory. Today, advertising is at a point where often the creative process is clouded by preconceived notions of what the boarded-out vision is. With the amount of content online, it's helpful to cross-reference and use strategies from what has worked in the past, and that comes with a level of assuredness. However, the thrill of the unknown is what got me excited me about "Sweater Porn" in the first place! It was a spark of inspiration, leading me to take that leap of faith and create a branded content studio specializing in 3D animation and motion graphics. 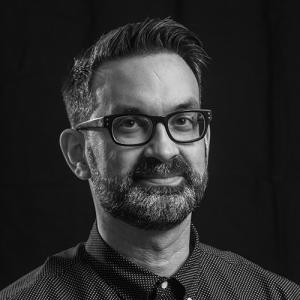