My life in video game advertising

No kid I knew would answer "What do you want to be when you grow up?" with "A person who works in advertising!"

And it wasn't for lack of trying. The '80s pressed advertising hard, with every other movie featuring a successful-and-therefore-terrible ad exec who gets some real perspective on life because they switched bodies with their kids, or something like that.

When we were young, ads were something that interrupted our shows and invaded our comics. There was no way to fathom a building full of adults grinding out late nights so I would question the beef quotient of other fast-food restaurants.

But all that changed when a super nuke of copy was dropped on my friends and me. Four tightly packed, incendiary words featuring one brilliant, made-up contraction.

Boom. The Sega Genesis, a 16-bit game console, came out swinging against the 8-bit incumbent. NintenDON'T. Say it out loud. It's great, right?

Suddenly, advertising was relevant to us. It was talking directly to my group.

Sure, there were plenty of ads geared toward kids, but this wasn't just some sweater-clad white boy hamming it up with Ninja Turtle toys where the turtles were clowns now for some reason.

We knew that was bullshit. This ... was truth.

Some loved it. Some hated it. It depended on which side of the first console war your parents put you on.

But those words stuck with us, and as video games continued booming, so did the ads pushing them. In college, CG trailers for Halo 2 had my friends and I huddled around my ethernet-capable PowerMac waiting dozens of minutes for a single download to finish. Hype and emotion were becoming staples of a game launch.

In parallel, I put aside my aspiring filmmaking intentions to investigate advertising as a major. A way to work on film while getting a regular paycheck, as it was pitched to me.

And that super '90s Genesis ad was absolutely something that bolstered that decision. As the aughts wore on and I finally left the tundra of Syracuse for the sun of Los Angeles, video game ads transcended into emotional powerhouses.

Benchmarks not just for "brand building," but for genuinely connecting with an audience. Love letters to the fans of a fascinating and evolving medium.

Cut to today, and I've been incredibly fortunate to work with clients that make the thing I'm most passionate about.

We used the Super Bowl to share the empowerment that makes Pokémon and its fans so damned special. We had the indomitable Idris Elba stroll through a firefight to showcase the tactical demands of Rainbow Six: Siege.

And we gave people a taste of the dark humor and choice that make Hitman so bloody fun by letting them kill Gary Busey any way they wanted. (I kicked him into the ocean.)

I'd say nintenDON'T listen to them. 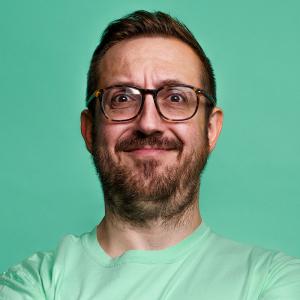