In Defense of Long Showers

Where else would I get my best ideas?

Growing up, the shower was my stage. My Off-Broadway. My Radio City. My f@&ing Warner Brothers lot.

At times I was a rain-drenched leading man, shouting apologetic ballads toward the window of "a Katie Holmes type." Other times I was a stubbled detective lording over a roadside crime scene. I'd speak through gritted teeth while struggling to light my imaginary—but very wet—cigarette.

"This guy looks like he tried to kiss a—goddamn piece of sh—kiss a grizzly bear in heat."

"Still better looking than you, Scofield."

Scofield, it should be noted, was my partner. A bumbling idiot. The perfect buddy-cop foil.

For years, this [odd] behavior was my modus. Sure, most people sing in the shower. They carve shapes in the soap bar. They—I don't know—wash their hair, or whatever. Not me. It was as if every time I crossed the barrier into that chamber of sensory deprivation, I was unlocked. No longer being fed information from every angle, at every turn—as the world does to a person—my brain had an unquenchable need to create. To fill the void. To surpass it even.

I didn't know it at the time, but it was in the shower that I became a copywriter.

In college, though, I took an understable hiatus. Communal showers made it far too difficult to carry out such behavior without being pegged as "that odd dude who argues with himself in two regionally specific British accents." But with a four-year degree in hand, and seven seasons of Mad Men under my belt, I left the world of communal showers for the world of open floor plans, and set out to make my mark in advertising.

Nowadays, my 9 to 5 is filled with "information dumps." Creative directors, stategists, account teams—they force-feed me the brief and everything that comes along with it. I then put the data, the customer insights and the personas on ice—and wait for the evening when I can melt it all down in my corner office.

Did I say corner office? I meant the small 3-by-3-foot shower in the corner of my house. That's where everything else goes silent, and the ideas come to life. A tagline, by my estimation, is not a tagline until I've recited it out loud 400 times—and 400 different ways—in my shower. Sometimes as Idris Elba, other times as Matthew McConaughey. Usually as Sam Elliott.

Yes, It may be an indictment of the year 2019—of my generation—that I can't access this type of creative "goosfraba" simply at my desk. At least, not without being pulled by the constant allure of a shiny object. Or YouTube clip. But to all you sayers nay, I say this:

*stubbled detective voice* "Deal with it."

No, that's not quite right.

*Clint Eastwood voice* "GET OFF MY LAWN." 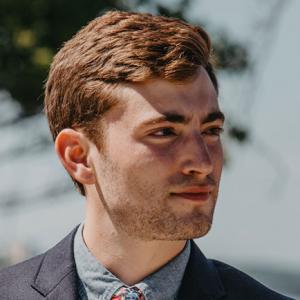