The brilliance of 'Brown's Job' by BBDO

My creative partner and I used to mockingly refer to it as The Art Director 101 Kit. You know, that cubicle shelf crammed with action heroes and Star Wars figures. Or those carefully curated collections of View-Masters or Polaroid cameras or Scooby-Doo lunchboxes some people keep in their office. We felt like the owner of such a collection was trying a little too hard to say, "Look how creative I am!"

Most of the truly talented creatives I have worked with in advertising don't give a second thought to what's displayed on their shelves or walls. Their desks are often a cluttered mess. The only art they've hung lately is some rough ideas for the campaigns they're working on right this minute. There is little time for bidding on antique Pez dispensers when the wheels of capitalism need greasing.

But if you look to the left, on that one piece of wall partly hidden behind the giant stack of job jackets, there is often some little framed slice of advertising memorabilia that holds a clue to their greatness. A powerfully condensed version of their personal philosophy. Something like "Brown's Job."

This legendary self-promotion ad, run by BBDO back in the 1930s, was written by, of all people, their treasurer. It is arguably one of the most inspiring pieces of advertising copy ever conceived. It's been reported that requests for reprints still roll in today.

"Brown is gone," the ad begins, "and many men in the trade are wondering who is going to get Brown's job." Who indeed? Brown's bosses, the ad explains, have been wading through candidate after candidate, barely able to contain their disbelief, and have yet to find anyone who could even come close to replacing Brown.

In fact, according to the narrator spinning this curious yarn, there's really some question as to what Brown's job even is. "Back at the office he answered most of the critical complaints, although Brown's job wasn't to handle complaints. Brown wasn't in the credit department either, but vital questions of credit usually got to Brown." As one might surmise, at this point in the story, that Brown was too busy being the fulcrum of his company to rearrange his squirt-gun collection.

Brown, it turns out, had a whole lot of common sense that he used without even trying. And now Brown is gone. The company executives are frantic. Who can replace someone like Brown? "Brown's former employers know it," the ad concludes. "Brown's job is where Brown is." 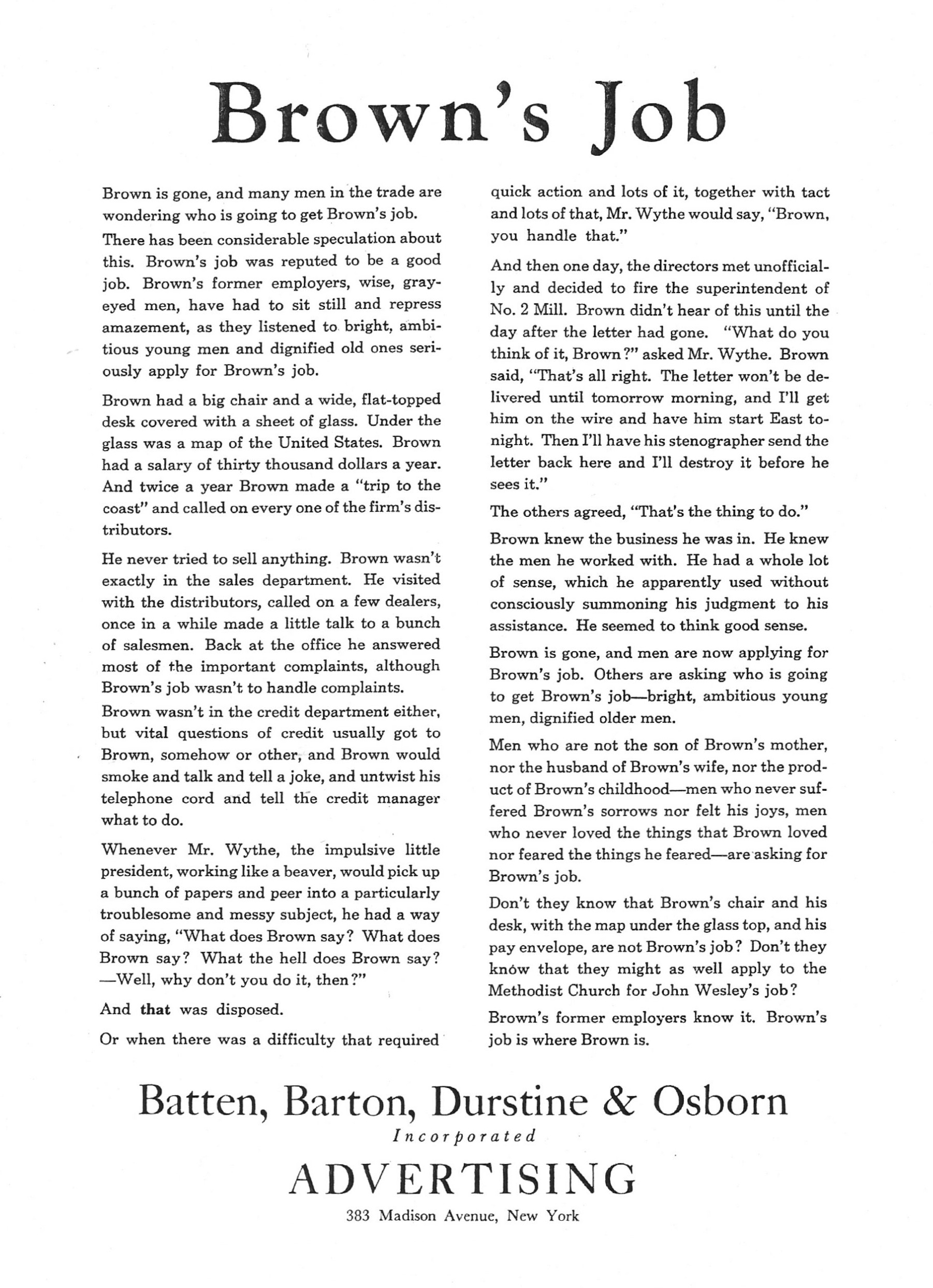 It is worth repeating that an accountant wrote this ad. I'm not going to speculate on whether he had a collection of antique calculators (if such a thing even existed in the 1930s), but he was obviously a serious "Brown." Those of us who've been around for a minute have known a few Browns in our day. These are the people you can't imagine leaving the company, because to imagine it would fill you with dread. A friend of mine once worked with a Brown at a giant cable conglomerate, and one day he threatened to quit because he didn't like the stuffy atmosphere in the corporate offices. So what was the company's response? They leased a separate building just for him and his merry minions.

Even beyond its inspirational value, "Brown's Job" is a master course in copywriting. It's an ad for an agency, but never mentions advertising once. It doesn't tell us, but rather shows us what excellence really looks like, thereby laying that mantle at the doorway of its sponsor, BBDO. Even more amazingly in this short-attention-span world, it is a 500-plus-word monument to the long-copy ad that is almost impossible to put down, yet just as impossible to find anymore.

Over the years, I've softened my cynical view of the rave pacifier collection. But an ad like "Brown's Job" really puts things in perspective. As the old saying goes, you're either a show horse or a work horse. And while it is true that the show horse sometimes gets the gig, he will never get a separate building all to himself and his posse because a giant corporation has decided he is indispensable.

So yes, Brown's Job is a pretty high bar. If you find the ad hanging in the corner of someone's cube, rest assured this is someone who at least aspires to greatness. Someone who, like Brown, realizes their job is much more than their desk or their paycheck or their latest figurine. "Brown's Job" doesn't sit quietly on a shelf begging for attention. Everyone knows that Brown's job is where Brown is. 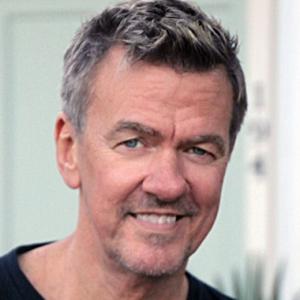 Lee Gipson
Lee Gipson is a "permalance" copywriter who really enjoys saying that word. You can see his work at LeeGipson.com.
More from Lee Gipson