5 Reasons New York Is the Creative Center of the Universe, and Why It Will Continue to Be

From pizza and bagels to tap water, world-class art, architecture, language, culture and cuisine representing every corner of the globe and served up round-the-clock, there are certain things New Yorkers simply do better than anybody else.

There is another arena in which the city reigns supreme, and that is creativity—specifically, creativity as it pertains to the business of advertising.

As a New Yorker, I am, of course, biased.

As someone who's worked in this industry for his entire professional life, I also know it's true.

It is not in dispute that New York is among the global capitals of business, finance, media, technology, diplomacy, arts and culture—and advertising. And yet, the city as a creative epicenter doesn't always get the love it is due in an age of multinationals, outsourcing, offshoring, telecommuting and penurious business practices that often fail to adequately value that which is clearly invaluable.

That is not to say that brilliant, dedicated people who work in our industry and others don't exist in other places; obviously they do. As head of a global creative agency, I can certainly attest to this, as I work with them every day. But it disappoints me when the beautiful collision of cultures and ideas that perpetually happen in my own city—and its profound impact on what our industry produces—is taken for granted.

New York is hardly the only place that stimulates creativity. In a report last year for The Wallace Foundation, titled "Fostering the Creative City," writer Carol Coletta made the case that there are any number of attributes that cause a city to be a draw for creative people—from building temples of art and developing arts districts, to promoting cultural tourism and realizing the all-important economic impact of creativity. (According to the nonprofit group Americans for the Arts, arts and culture enterprises spur $166.3 billion in economic activity in the U.S. each year and generate some 4.6 million jobs.)

Meanwhile, a study by Enrico Berkes of Northwestern University and Ruben Gaetani of the University of Toronto found it is cities that continue to create the greatest number of "unconventional innovations" that have the greatest impact on business and culture.

Here are five reasons why I believe New York is—and will, at least for the foreseeable future, continue to be—the creative center of the planet.

New York is a collision of ideas.

Twenty-first century telecommunications may have miraculously brought us all together under one worldwide, ecumenical tent. But in my view, there's simply no substitute or stand-in for New York when it comes to that central, motivating source for creativity: the collision of ideas.

It's been suggested that New York City is home to as many as 800 languages. With such a disparate array of people, places and cultures represented among its blocks, boroughs and 'burbs, you'd be hard-pressed to think of another place of such singularly dynamic, energizing tension whose natural consequence is a one-of-its-kind tapestry of mind-blowing creative output.

New York is a business capital.

Not only does New York stand alone insofar as its convergence of ideas, but its position as a center of global businesses and brands also makes it a magnet for talent.

It is not happenstance that the city has played such a critical role in the institution and evolution of advertising, and consequently in the most famous and important branding and marketing executions ever. For more than a century, from Madison Avenue to Mad Men and beyond, New York and the history of advertising have been inextricably linked. One might even say that New York is advertising.

Sure, you can set up an office and base your headquarters anywhere, especially in these connected times. But are you likely to get that uncommon collision of ideas anywhere else?

New York is a cultural center.

One thing we can all agree on is that to be creative, one has to be passionate and talented but equally a well-rounded, culturally curious person.

So many creative people down through history have been drawn to New York, quite understandably seeing as the city has always been home to the highest level of so many artistic disciplines—from the Metropolitan Opera to the Metropolitan Museum, Broadway to the New York City Ballet. Each has the awesome power to entertain, amuse and move, as well as inspire.

Every city has its cultural institutions, to be sure, but you're not likely to come upon any other destination with quite so much variety available to so many at any given moment.

New Yorkers are a team.

Advertising is so much more than what happens inside the four walls of an agency, and the best global campaigns don't happen in a vacuum.

So much that goes into our work relies on our creative partners, and New York affords agencies both headquartered here and elsewhere an incredible support system by way of the finest production facilities, editors, designers, photographers, animators, illustrators and so on.

These are the people who make us shine—and they are both our indispensable colleagues and our neighbors, driven by the same creative mojo that fuels us. They are giants in their respective fields, and fellow masters of creativity.

I know I have always been inspired by New York and its rich bounty—and I continue to be every day, in big and small ways. Significantly, that inspiration has been an undeniable force in my life and the lives of those I have the good fortune to call my colleagues, as much as it has inspired the relentless output of our agency's award-winning, results-driven creative work.

The creator of Sex and the City, the groundbreaking TV series about four friends making their way in New York, famously referred to the city as the show's fifth character. I would propose that for those of us who live here, who create things of all kinds here and produce the world's greatest advertising from here, the city is the real protagonist. 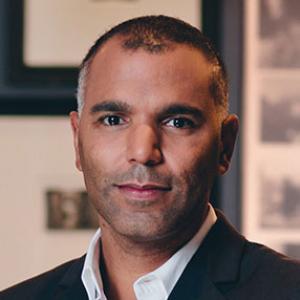