The 2002 Nike Ad That Kept Me in Advertising for Life

When I began my career as a P.A. on commercial sets, I knew it was a direction worth exploring, but had no strong inclination toward the sales-y spots that I found myself frequently working on.

I jumped at every opportunity to learn more about the business and the creative process, always looking to get to the next level and take on bigger, better projects—whatever that may have meant to me then. A lot of my early jobs in the industry were mundane and creatively lackluster, and I started to wonder if I had just decided to spend the rest of my life watching fast-food sandwiches being manicured on sound stages.

Then I saw the spot that stopped me in my tracks.

It was a bit of a seminal moment for me—albeit less monumental to others—and I remember exactly where I was. It was an average day in 2002 in a pre-hipster-chic Chinatown production office. I was with my fellow P.A. cohorts (in between coffee runs, no doubt) when the typical bustle was interrupted by everyone gathering around a computer, watching a new commercial in an awe-inspired trance.

Jake Scott and Wieden + Kennedy's "Move" spot for Nike had just been released, and I was fully engulfed. There was a palpable sense of heightened importance, one not often reached by a twentysomething in Hollywood trying to make a name for themselves, that struck all of the junior staff as worthy of our full attention. I was captivated by the music, the edit, the direction and overall the pure energy of the spot. It finally struck me that a commercial was capable of telling a story which could move people, and not just simply serve as a device to sell products.

We must have watched "Move" at least 50 times that day, taking in the nuances of the edit, looking on in awe with our first "wish I had made that" moment of our careers.

Though I came to production from a deep fascination with cinematic filmmaking, my experience to that point had left me shifting my commercial work into a completely different category—still storytelling, but on a much less cinematic scale. Seeing this spot really opened my eyes to the fact that all the same powerful narrative tools that were essential to many of my favorite films were just as important in commercials.

From a production perspective, I was able to appreciate the meticulously detailed cut. But as a viewer, I couldn't help but feel it was one seamless take—one torrent of action that continued to build energy. What kept me coming back for more was that the momentum didn't cease at the end of the spot; the energy seemed to erupt beyond the final frame, inciting viewers to pick up and take off where the action left off.

The surge of adrenaline encapsulated within each shot of that spot is something I continue to keep as a source of inspiration, both in storytelling and in the underlying energy, for the campaigns that I produce even now. Whether creating a promo campaign for CNN's latest series or a celebrity-driven spot for a major beverage brand, I work closely with clients to ensure I'm not just getting the job done but creating something that will catch the attention of today's constantly inundated digital audience.

Taking a boutique approach to a shifting industry, we produce content that isn't always on the heightened scale of this kind of spot, but its ethos and artistic values are always at the core of what we are doing for our clients.

While the canvases that we have at our disposal are constantly changing, the kind of storytelling and human emotion I saw in that spot back in 2002 remains timeless. Now you may not only see that sort of cinematic energy executed in a :60 television spot, but in a large-scale brand activation at a global music festival or an immersive AR experience on a mobile device as well.

At the end of the day, we're always working to tell stories that move audiences. 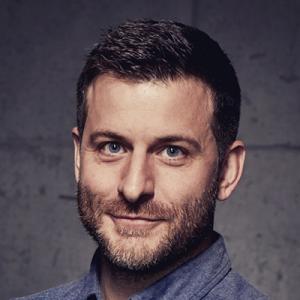