Starting Our First Agency Jobs in a Global Pandemic

One creative team's virtual debut in the industry 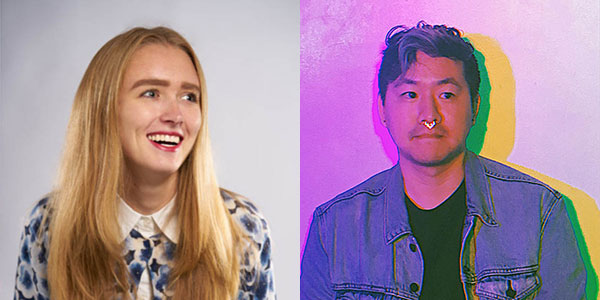 In an industry that's notoriously difficult for inexperienced young creatives to get into, we were very lucky to get jobs—our first ever—at the agency Something Different earlier this year. And then global chaos erupted.

A pandemic is definitely a bizarre time to be the newbies at work, though we realize we're incredibly lucky to even be in employment right now. It's been scary to see people we admire in the industry get laid off due to the current situation and inevitably it makes you think: "If they got laid off, why are we still working? We don't know what the hell we're doing."

On a personal level we've coped with the situation quite differently. Malia gets claustrophobic if she stays inside too long. She's now in a steady routine that involves getting up super early to hit the running track before it transforms into Disneyland, as well as taking morning and evening walks every day.

Meanwhile, Joel, who has only left home a few times during the past four months, has stopped trying to give his days any sense of structure. He might bother to put on a pair of sweatpants in the morning—emphasis on might—and often ends up eating lunch at 4 or 5 p.m. To entertain himself, he had a brief flirtation with embroidery but has found Animal Crossing is more his speed.

Now that we're holed up in our apartments, the idea of a typical working day has disappeared. Everything is so loose, which has its good and bad points. We have more downtime than we would if we were in the office, but when you aren't doing anything productive, you inevitably feel guilty and wonder why you're not working.

It's surprising how much you miss mentally preparing yourself on a Monday morning and the excitement as you get to the end of the day on a Friday. Days blend into each other so much that it's hard to tell where you are in space and time anymore. You realize how much going to the office every day helps landmark your life.

We're so grateful that Something Different is a relatively small agency. It's meant that we got to meet almost everyone in the company before lockdown and we don't have that feeling that we're competing with our colleagues just to get the attention of a creative director, or that we have to try to introduce ourselves to people we don't know to get things done. The breaking down of social barriers before the lockdown also lent itself to more understanding and flexibility during an unprecedented time when patience and compassion have been needed over anything else. It's also been really nice seeing our colleagues' kids pop up on video calls and getting a more rounded picture of who they are, which we wouldn't have seen if we weren't working from home.

As creative partners, our way of working has moved from spending time together on video calls going through ideas to working more independently and collaborating afterwards. That could either be because we know each other so well at this point we don't need to discuss things so much, or we're just really fucking sick of Zoom calls. Who knows.

Maybe when this is all over, we will learn to work smarter, even if it's in a whole new way.