A Powerful Vision Brought to Life: The Making of 'Today, I'm Brave'

Even greater change is ahead. Will you join us?

It wasn't a vision of colliding thoughts or scrambled consciousness. It was crystal clear and real. Unlike anything I had ever experienced.

It was a sudden visual of a group of orphans in Africa that appeared and an innate awareness that I was supposed to adopt them. The vision was so vivid, so powerful, that there was no room or reason to doubt it. Or to overthink it. All I knew was that I had to make something happen.

That vision was four years ago, while I was in a deep meditation. It's a practice I began a few years earlier. But I can still remember that moment as vividly as if it were yesterday.

Not knowing where this would lead, I shared the vision with a friend. He then introduced me to Tiffany Persons, an amazing, purpose-driven individual who is the founder of Shine On Sierra Leone—a nonprofit focused on innovative education in a country in West Africa that is no stranger to challenges.

I sat down with Tiffany and instantly knew we were supposed to do something, together. Something sustainable and deeply felt.

After all, one of the key values of Muddy Lotus was based on teaching children the concept of inner dependence, and from there, creating a better life for themselves.

Then Ebola hit and their school closed.

It was at that moment that we all decided to take the Brave philosophy of our agency at David&Goliath and infuse it in their school and community as a means to build on their practice of inner dependence and help them navigate through the crisis. A philosophy that they could make their own.

Today, I'm Brave is more than just an initiative, a rallying cry, or a movement. It's a belief system and a daily affirmation. One that inspires an individual to choose bravery over fear in the face of whatever obstacle stands in their way—whether it's Ebola, a test you need to take, or a mountain you aspire to climb.

In this case, these brave children were not only up against the deadliest disease in 50 years, but with their school closed, the repercussions would be far-reaching. Because in their country, education is the only way you stand a chance to fight for a better life.

To truly be part of their daily lives, we gave them T-shirts with "Today, I'm Brave" prominently displayed as a reminder to be brave, manifesto cards with five daily affirmations, and worked with Tiffany and her team on an educational curriculum centered around bravery. To encourage them along the way, we sent them a video from our agency, letting them know we believed in them.

Just a few months later, we received a video from them documenting their understanding and overall transformation. They had plastered the words "Today, I'm Brave" around the community, from license plates on their bikes to painting it on the walls within their community. As we saw the power of those three words, we established a "teach-the-teachers" program in which they could identify their personal stories of bravery through sharing, writing, songs and hand signals. While the word "Brave" was part of their vocabulary, their culture hid it, reserving the word to describe perceived heroic acts you'd see in Hollywood scenes, not an action that was happening every day in their own village.

It's really hard to describe the emotion, when watching their video, but it left all of us in tears.

Seeing the impact Today, I'm Brave made on the children and community in West Africa encouraged us to explore what effect it could have on the rest of the world. So we rolled it out, starting with the cancer ward at Children's Hospital in Los Angeles. From there, it continued to grow. We started to see examples of people bravely taking on their challenges, big and small, from all over the world. And capturing their words of bravery on video, which we've collected over the years, to share and inspire others to believe in their own inner bravery. People from all walks of life—from celebrities to senators to cancer survivors, they came forward to reveal how bravery impacted their lives.

We also created various initiatives and partnerships to raise awareness and funds for national nonprofits and causes that needed immediate help—initiatives such as the Today, I'm Brave Speaker Series that activated brave stories in front of packed audiences, the 100Roofs Project in Puerto Rico that raised a million dollars and put roofs over the heads of 116 families who lost their homes in the wake of Hurricane Maria, and the launch of the Brave Library in Sierra Leone.

From this, we created a new model for philanthropy, one that would harness the collective power of bravery and further deliver tangible and sustainable impact around the world.

Over the past four years, Today, I'm Brave has inspired hundreds of thousands of people to bravely take on their biggest challenges.

And despite all that, there was still something missing. I had yet to meet the children who inspired it all.

So, like them, in May 2019 I took my own brave step by flying 7,000 miles to a country that had been rife with Ebola and civil unrest, and has one of the highest burdens of malaria, in order to meet the community there. What I experienced in Sierra Leone was beyond anything I could ever imagine.

It was there that I met 63 children who lost their parents to Ebola. As I walked up the hill, they were waiting to meet us, wearing their Today, I'm Brave T-shirts and singing a song to welcome us. It was at that point that I realized, they were the ones reflected in my meditation. They had named themselves "63 Brave." 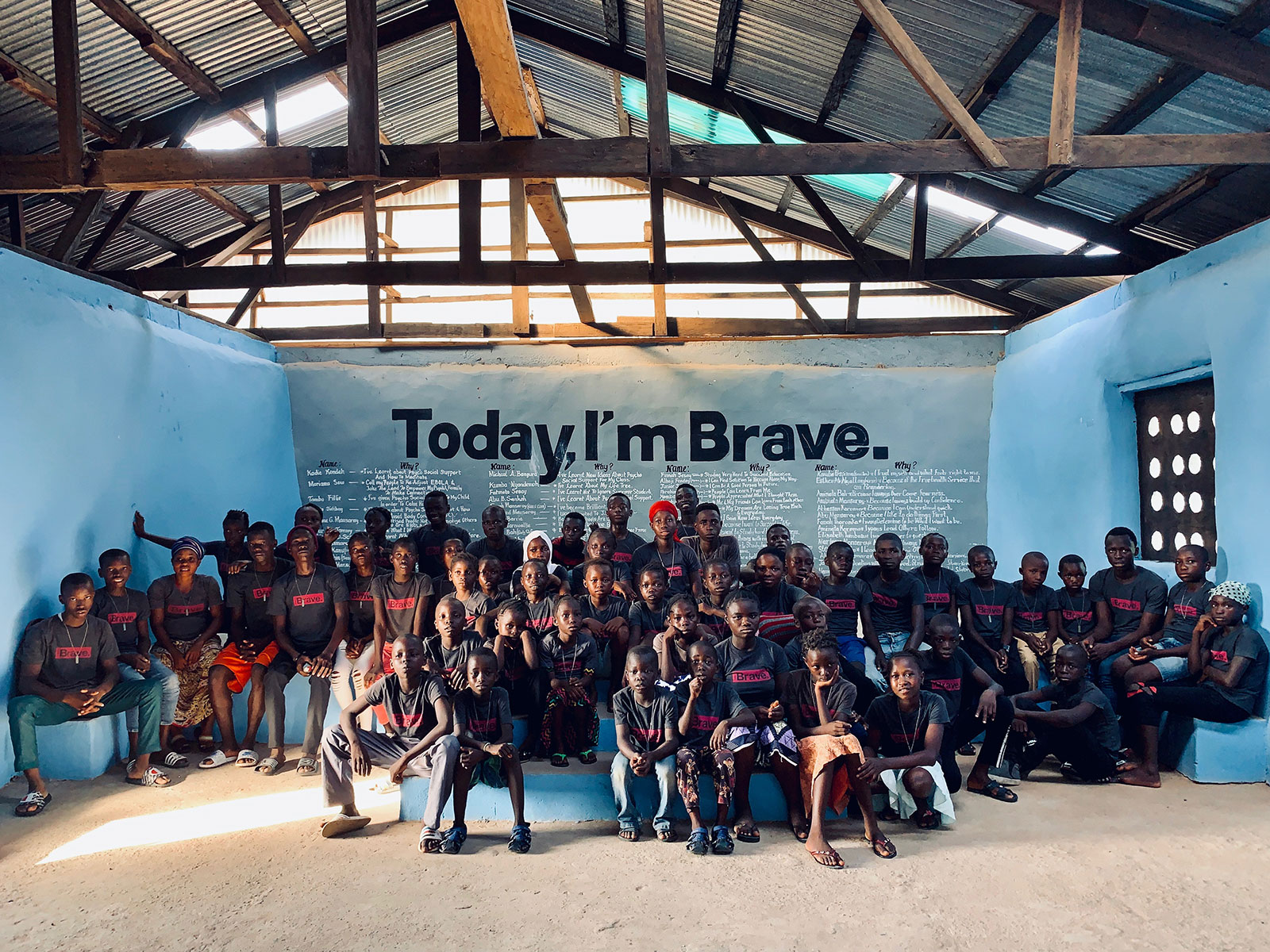 For two weeks, I lived among them, became an honorary chief of their village, and listened to their stories of how they lost their parents to Ebola. And to think, a year later, the world would be facing one of the worst pandemics in a century.

Together, we created a filter for their daily lives called the Ten Brave Ways, which is based on a value set we work and live by at our agency. We also met with the head of the University of Sierra Leone to discuss next steps to help fund the education of the 63 Brave, so they can take their bravery forward to help create change in their communities and the world around them. 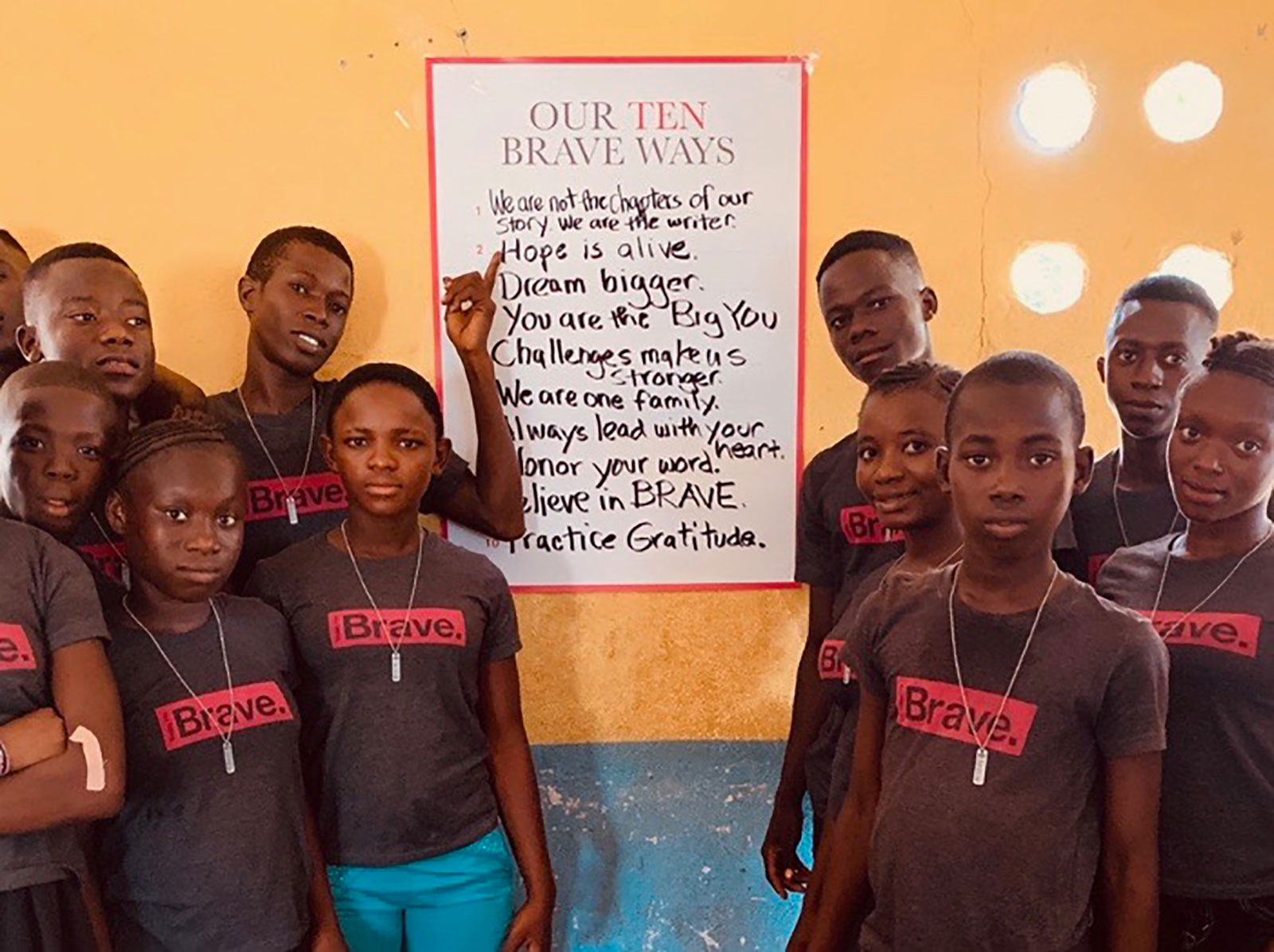 The 63 Brave create their own Ten Brave Ways

As I was leaving, I thanked them for being the inspiration behind Today, I'm Brave and vowed to grow it even more on their behalf. 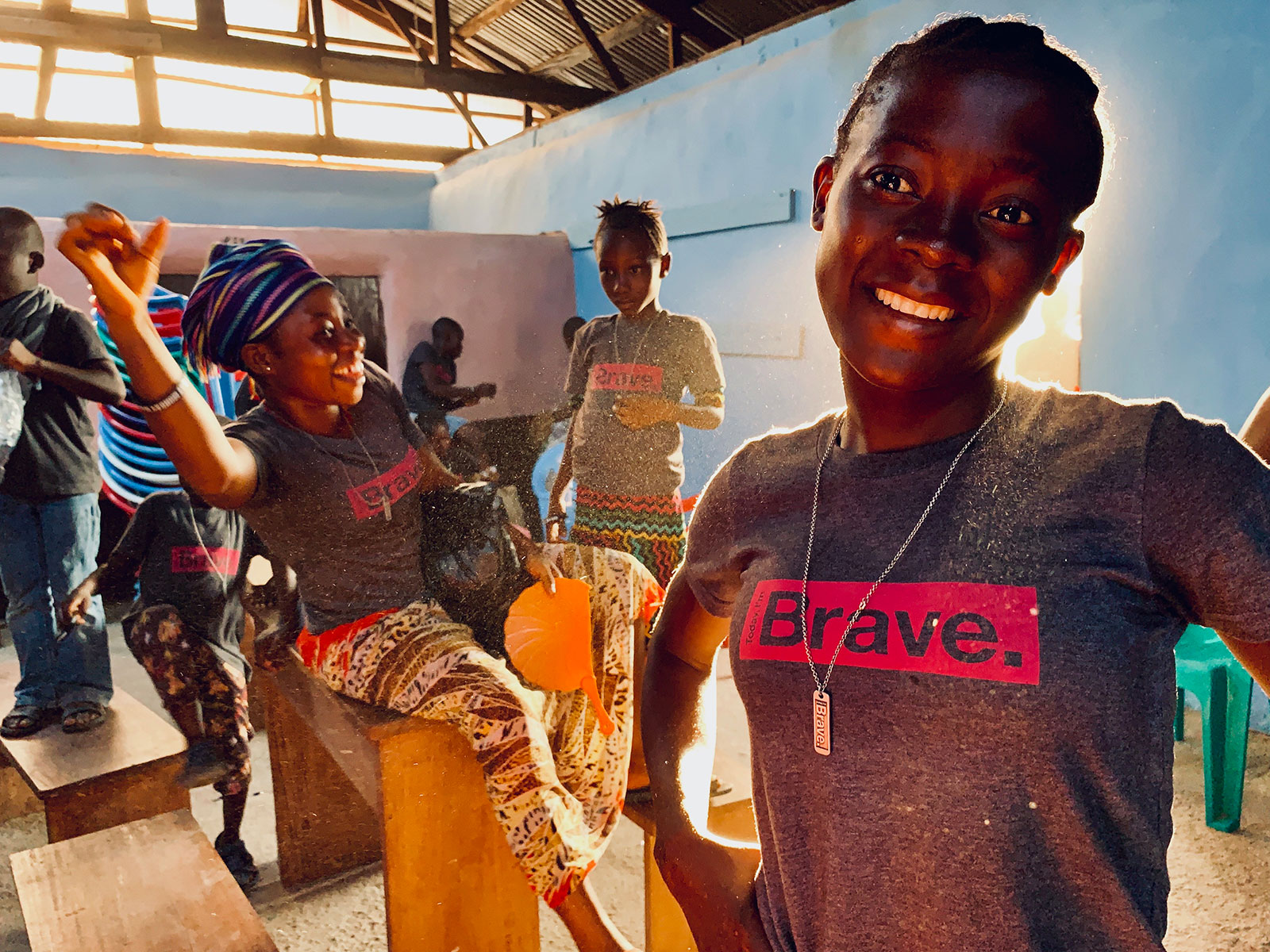 Scenes from the farewell celebration 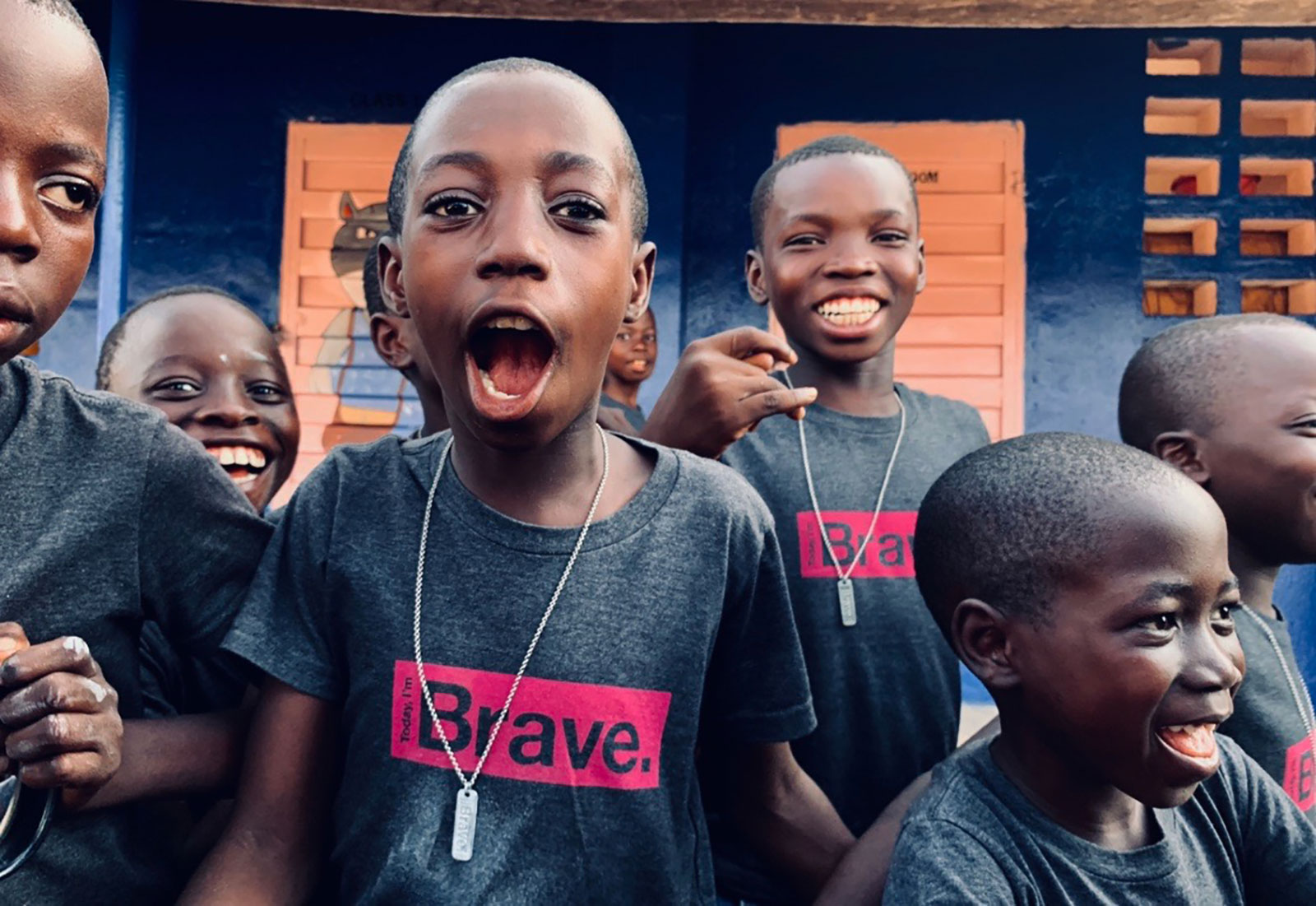 Scenes from the farewell celebration

When I look back to where this all began, I can't help but think of the vision that presented itself in my meditation.

Sure, it would have been easy to dismiss that vision. Easy to give it little weight.

We would never have met all the brave individuals who played a big role in helping us get to this point.

We would have never experienced the impact we've made over the past four years and the life-changing meeting of the 63 Brave.

What we have created together is just the beginning.

The possibilities of unlocking bravery in the world and manifesting even greater change is right in front of us.

The time is now.

Because more than ever, the world needs your bravery. 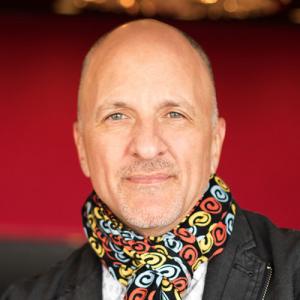