It's Time to Rethink the Role of Producers

In the realm of executing creative ideas, producers are, more often than not, being leveraged in sub-optimal ways. As someone who came up in the industry as a producer, I've worked on hundreds of projects globally that all had one thing in common: everyone involved had a different idea of what the producer's role should be. Within agencies and in-house at brands, the definition of a producer is always changing, depending on what a given project needs. Need someone to manage a project with an eye toward strategy, efficiency and budget? Find a producer. Need someone to "clean up" a messy situation gone awry? Call the producer. None of that is necessarily wrong, but it's a very narrow view of a producer's true value. Ask any producer on your team what their biggest pain point is, and it's usually that their skill set and responsibilities are misunderstood and thus, misused.

This lack of a universal definition or standard for a producer role is problematic. The advertising industry continues to relegate producers to the tail-end of projects after an idea is already sold, or worse, brings them in to put out fires. Beyond the inefficiencies and frustration caused in the near term, in the big picture it leaves a lot of untapped potential for ideas to grow.

It's time to break the cycle. I'd like to see our industry rethink what it means to be a producer and how to work with them—because when leveraged the right way, a great producer can take any idea and provide a fertile environment to make pretty amazing things happen.

Producers create an environment where people want to work together.

The truest definition of "to produce" is "to bring forth," which has origins from farming. Farming is all about setting up the circumstances for plants to take root and grow. You can't force plants to grow, but you can put them in the right spot in the right surroundings, and with just the right mix of land, care, tools and people, great things blossom.

When leading a project, a producer looks at how they can motivate people to collaborate, share what they know, and make things happen as a team. Collaboration is a fundamental human skill; it's not as learned as we think it is. Watch a bunch of kids playing and building a sandcastle and you'll see them naturally work together in this way. Somewhere along the way as we get older, we lose touch with these skills. The best producers know how to create the circumstances for creativity and collaboration. More collaboration leads to more contribution and a better process, and a better process leads to more people working together to make things.

Producers know how to navigate a hyper-specialized industry.

Our workforce has been shifting toward hyper-specialization since the beginning of the Industrial Revolution. In school, students are pushed to select increasingly specific areas of study, followed by career paths. So, what happens when you gather multiple divergent specialists to work together on one problem? That's a new skill that's needed. Producers are uniquely skilled at tackling "team sport" ideas. Much like a coach who recruits and leads a team, they know how to put people in the right roles and provide a game plan. If our society shifted its mindset from skill-first to the producer mindset of idea-first or team-first, we'd see more team-based approaches and very fertile ground for ideas to emerge.

In a world of a lot of talk and little action, producers are people who will actually do what they say. Great producers make you feel the way you do when you see a doctor. You entrust your life to them, and they may not always tell you what you want to hear but they'll always tell you what you need to know. My hope is that one day, when you have an idea that needs a team of specialists to bring it to life, you will call a producer—just like you'd call a doctor when you have a health concern or a lawyer when you have a legal problem.

Under the stewardship of a producer, more people from disparate disciplines can collaborate around one common interest. Imagine what could be accomplished in fields in which trust and collaboration are sorely needed, like government, infrastructure, or healthcare. I'm looking forward to a time when kids grow up wanting to be producers because they want to realize the next great idea that will change the world. 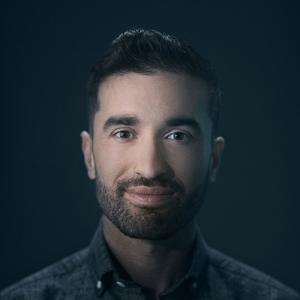