Gen Z May Save Us All, But Could They Without Gen X?

On the freedom to be, and buy, as we please

The hallway of Marketing Briefs is littered with pleas to figure out how brand A can become more relevant to Gen Z, the future of commerce and consumption.

As work gets developed, we speak to the diversity, binary busting, identity shifting, conscious consuming (more or less), status quo rejecting expectations, attitudes and behaviors of many of those now aged 6-24. We note that, like all generations before them, they're unlike any generation before them.

But why they are and why that matters to marketers hasn't gotten enough attention.

Why is Gen Z like this? Because of Gen X, and many of you.

Gen Z is, of course, not the first generation to push back against and reject what preceded them. But they are the first to have this rejection of so-called "norms" and "ideals" nurtured, supported, facilitated, and neither be told nor expected to grow out of it. ​

The work we do (some of us as parents and all of us as marketers) is raising this generation with a cultural permission never before extended to any generation—one that speaks to a shared mindset despite disparities in life stage. They're busting binaries because they're growing up in a world that's allowing them to; inspiring them to; not saying no to.

This mindset and these values aren't about a single generation, but a growing, cross-generational population rejecting constraints on their unfettered expressions of self. For them, identity is fluid, reigns supreme, and the "permission" to explore it—perpetually, perhaps—is trickling up from Z to X and beyond, like so many salmon swimming downstream.

The second most popular tweet ever tweeted shows a smiling President Obama sharing a moment with a Benetton-ad of toddlers looking back at him through an open window.

"No one is born hating another person because of the color of his skin or his background or his religion..." pic.twitter.com/InZ58zkoAm

Posted in response to the tragic 2017 murder of Heather Heyer in Charlottesville, Virginia, his tweet quotes Nelson Mandela saying, "No one is born hating another person because of the color of his skin or his background or his religion…"

Mandela's quote reveals a simple truth about human nature and nurture: The equally simple truth is that we're nurtured not just by those raising us directly, but by all that surrounds us, including culture at large, of which we are among the purveyors.

Popular culture—most certainly including the marketing we all put into the world—has for generations sometimes bullied and sometimes seduced people into the comforts of conformity; most always as an unintended consequence of just trying to sell something—but as a consequence, nonetheless.

We created standards of beauty, cool, masculinity, femininity, age, sexuality, success, looks, body types; defined and promoted culturally acceptable ideals and norms and behaviors. We raised generations defining for them what they were supposed to be, want, aspire to, covet—and not. All just to sell lipstick.

Those who didn't conform to cultural mandates, because of biology (to say nothing of want, taste, preference, socio-circumstance) were othered, not norm-al, literally and figuratively ghettoized, forced to fight for emotional and economic survival.

But cultural change often comes slowly until, sometimes, it doesn't. And the last decade +/- finds us as both humans and marketers doing a better job (unless you're an R in congress), allowing others to reject the constraints of the past and putting new ideals into the world.

And so, as we marketers fill our decks marveling at Gen Z's fluidity, let's remember they aren't the first to reject a status-quo they didn't create, or want freedoms long denied, or to try to define their own ways and rules. But they may be the first being "allowed" to do it, and whose expectations of these freedoms, justices and rights are not something out of which they'll need to grow.

Let's hear it for the X'ers who raised them.

Of course, Gen X was not the first to fight these same fights literally or culturally, nor the first driving conversations around multiculturalism, non-dualism, gender and sexual fluidity, identity politics, autonomy, equity and equality and non-conformity.

But—a generation who came of age being defined as slackers and criticized for knowing what they were against but not for (stereotypes gonna stereotype)—is ensuring that the Z's are the first whose individual and idiosyncratic humanity is culturally nurtured and not culturally stifled.

Contrary to the word I've used a few times, I don't think Z is in fact "rejecting" that which would constrain them. Rejection implies thinking they had to conform or were beholden to the way it/they "are supposed to be" to begin with. If my kids and their friends are any small focus group, I can attest that they have no such thoughts.

It breaks my heart and fills me with hope concurrently.

But the hopeful truth is that we (and you) are creating new cultural frameworks providing these kids an emotional freedom to grow up being, looking, dressing, expressing and having consensual sex with whomever they like. With fewer and fewer of them feeling the need to define themselves based on binaries; not needing to come out as gay or straight or bi or anything … just having to be, in a way no generation has been allowed before … the source of so much suffering for so many.

It seems Z has an almost generationally ingrained, Mill-ian sense of liberty that's being allowed more opportunity and space to grow unencumbered than ever before. But as we marvel at their fluidity, let's, again, not forget to pour one out for the X'ers raising them at home and in the world (sorry, millennials, this one's not about you).

And in what may also be another generational first, the permission this cohort has been provided isn't just trickling down, it's trickling up.

In ways we've not seen before, the freedom they've simply assumed is theirs is trickling up and becoming ours. The young are helping nurture the olds, allowing us to feel less encumbered, less constrained, less judged and more free to be you and me than we could when we were their age—or any age—before them. (Hat tip to Marlo Thomas.)

With all this said, I'd be wildly remiss not to acknowledge my privilege and that of my children, because of course and in real-time there are kids just like mine whose truths and souls are being stifled, crushed, pushed, channeled and taught not to be who they are and might be, but to be and act as others think they should be; their truth subsumed by another's. Tragedy's still unfolding at scale and in real time.

Of course this is especially true for those in underrepresented populations, who face systemic, legislative and ingrained cultural barriers to their being, let alone their thriving. Each a tragedy different than but equally as terrifying as and rooted in so many of the same ignorance and fears and isms, of Charlottesville and, as I write this, Texas+++.

But today, I'll take hope over anxiety and give thanks not just for this generation, but the ones nurturing their most human of natures. To what I assume is many of you, thanks, on behalf of my kids, for what you're helping let Z be.

Let's keep in mind that what Gen Z has in mind is not theirs alone. As we build the future of the brands for which we are stewards, maybe look back, at yourselves, not as an N of 1 but an N of many, helping this next generation be and buy as we would have liked to have had it ourselves. 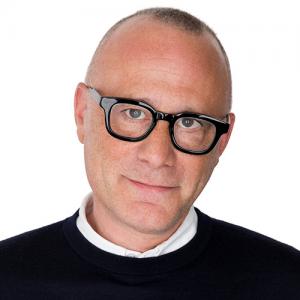 Seth Matlins
Seth Matlins is EVP cultural strategy and insights at 160over90, the cultural marketing agency within Endeavor.
More from Seth Matlins