A litmus test in our search for the strange, impractical and original

Recently, I gave an interview about the importance of teams being together for creativity to flourish. I talked about it in terms of energy and chemistry. Since then, I've had lots of supportive comments, and I've been reflecting on what it was that captured people's imaginations.

It's a hard one to put your finger on because, by its nature, this "energy" thing is really intangible—but when I tried to analyze it, I realized it's about something simple and universal.

Laughter. And being a bit crazy?

Research shows that a baby laughs up to 400 times a day. But for a person over 35, it's as little as 15 times. And people laugh more on weekends than Monday to Friday. It seems that work, for a lot of people, is not always such a happy place.

That's not great in any walk of life. When you're seeking to be creative, it's a real problem.

Why does it matter?

It's because, in my view, humor and original thinking are two sides of the same coin—the former, more often than not, comes from a stress-less state of relaxation.

Emmy Award-winning writer David Evans argued recently in an article for Psychology Today that all jokes conform to a similar structure. Here's one of his examples:

The theory goes that pretty much all jokes follow this formula. They set you up to expect one thing, then switch towards the end. We're surprised; we laugh. This bait and switch is, apparently, common to all humor.

What does this have to do with advertising and creativity?

It's not because I believe humor is essential within the work itself. Far from it. Much of the advertising I really admire is emotionally powerful, moving or entertaining in a different way, sometimes verging on being just a little bit crazy!

What I do think great creative work has in common with the formula of humor is the delight and surprise that comes from placing unexpected things together. All of the classic, award-winning work of the past decades has this quality; a sense of seeing something you've never seen before—from Apple's "1984" to Old Spice's "The Man your Man Could Smell Like," brilliant advertising, like great art, takes familiar elements from one genre or aspect of life and unites them with another. The result is real, deep emotional engagement from whoever is watching.

I think on our best day at TBWA\NEBOKO, this is true of the work we strive to do. Whether it's telling a Christmas love story from the perspective of a hamster for Albert Heijn, or bringing to life the bond between a father and daughter over a plate of vegetarian sausage for Unox—emotional connection comes from something familiar and universal presented in a uniquely original way.

So where does laughter come in?

I've had the privilege of working with and around creative teams for my whole career. Creatives sometimes have a reputation as the agency clowns and even the troublemakers, disturbing the peace. With good reason! A healthy, functioning creative team should be sometimes a rowdy place, erupting with jokes and laughter as the next crazy idea is surfaced and tossed around. It should feel playful, and even crazy—at least some of the time.

Almost every great creative idea I've encountered has arrived at the end of a slightly crazy chain. Link by link, thoughts are brought to the light, examined, maybe rejected for being too ridiculous and impractical. Often those thoughts provoke laughter. It's all a process whereby people's minds become open to the strange, to the unusual, to the impractical and original.

Over the past two years, we could not have functioned without technology like Microsoft Teams, Zoom, Google Office. They've enabled us to continue to collaborate safely, while adhering to the rules put in place to get us all through this pandemic.

However, there's been a cost too. It's silenced the daily laughter that ensures teams—particularly creative teams—gel and connect and set their imaginations free.

Laughter is about spontaneity, improvisation, energetic connection, overlapping voices; the dopamine rush that comes from an unrestrained, joyful belly-laugh, or a fit of the giggles that leaves you speechless. I don't know about you, but I'm not sure that has happened even once on a video call—despite the hundreds I've joined since 2020.

That's not to say I'm a Teams refusenik. I love how we've learned to work differently; when I need to be focused, I'm way more productive away from the distractions of the office. But it's about balance. Agencies should never be quiet places. The more human voices I hear, the more laughter, the more confident I am that great things are happening.

We may not reach the baby-level of 400 laughs a day. But I think we can all do a lot better than 15. 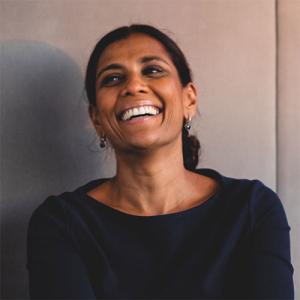