Creativity Is on the Move. Where Do You Fit In?

When I was a freshman in art school, making commercial work was seen as "selling out." There was a general agreement among the students that we should keep our art "pure." At the same time, we were learning about all the heroes of art history, especially during the Italian Renaissance, who created fine art masterpieces that we are still talking about more than 500 years later. My understanding of a creative person was an artist with an uncompromised vision.

It wasn't until I actually spent time in Florence that I realized the legends of the Renaissance were really the commercial artists of their day, with work that had strategic communications at its core. Sometimes the artwork was commissioned to tell a story for the church and draw viewers in. Other times it was requested by the royal family to show off their power. This work stood the test of time because of its institutional value, not in spite of it. Basically, they were masterfully executed ads. Was Giotto di Bondone selling out when he was contracted to paint frescoes in Santa Croce? In his day he had a creative job to do, and today his work is a crucial part of art history.

Being in Florence changed my mind. Since then, I've continued to question what it means to be an artist and make creative work. Who gets to have the word "creative" in their title? Where do they work? What do they do?

In the dozen years that I've been directing and creative directing, the most important change has been the democratization of creativity. Creativity can belong to anyone. Yes, we all have different roles, responsibilities and niches within the marketplace. But I think what connects us all, from brands, to agencies, to production companies, to freelancers, is that we've decided that we want to spend our lives being creative. We all need to make a living somehow, but we've also decided that we want to make that living creatively.

I don't just mean directors, art directors and copywriters, but account people who find creative solutions in client relations, producers who find creative ways to use their budgets, and brand managers on the client side who have a vision for their company. The label "creative" is broadening to be more inclusive. I think when we recognize that, the most amazing things can happen in our industry. Basically, our collective output will only be more creative.

When I started directing, it was understood that "creativity" was siloed in the top creative ad agencies. Brands went to agencies for creative ideas, and those creative ideas were handed down to production to execute. Now, there is a dispersion of creative people to all parts of the industry, from people going freelance or getting into production, to moving in-house at brands, or even launching their own products and services. To be clear, I'm not one of those people saying that agencies are going to disappear. They will always exist, but they might look very different over the next decade. Creative people can actually work and be productive anywhere. They don't need to stay in the silos.

For example, it used to be undesirable for top creative talent to work in-house at brands. That has changed. Also, when I first started as a director, it was very rare that brands would reach out directly to production companies for creative solutions. Today, it happens quite often, and I've shifted my focus to service those clients. At first, it was a hard decision to diversify what I do. I love directing, and I still direct for ad agencies. But in the past three years, I've spent at least 75 percent of my time working directly with brands, and I've established myself among creative directors as well. I can see why, from some points of view, these changes seem like the evidence of an industry in turmoil. But it is really a broader recognition of the one big creative family that we are all a part of.

At the end of the day, I look at the creative industry—agencies, brands and production companies—as a big group of people who all want to spend their life doing creative things. We all have that particular spark that motivates us, even when the headwinds are intense. When you take a step back and think about it, we are some of the luckiest people in the world. If you believe that being creative is simply part of the joy of being human, which I do, how amazing is it that we get to make a living being creative? If we can spend every day of our lives being creative, then we will be rich in our hearts and minds.

I hope we fully embrace this evolution and let go of the labels and silos. Whether you are a creative director, director, writer, producer, account person, strategist, brand manager, CMO, PA, etc., you are in it to be creative. When I started my career, there were clear borders that defined who was "creative" and what role they had. Those borders are changing, and creativity is migrating. The more we embrace that, the stronger our industry will be. 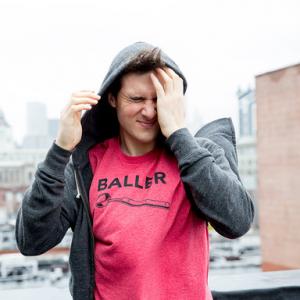