Advertising's Most Useful Power During This Crisis: Humor

We're able to help, doing what we do best

Lately I've been thinking about the 1997 movie Life Is Beautiful. Based on a true story, the film is about an Italian Jew who was imprisoned in a Nazi concentration camp during World War II. To protect his son and others in the only way he knew how, he used his sense of humor and gameplay to distract them from the everyday atrocities. The heartbreaking story showed us that even if we feel powerless, we have a great ability to console, protect and serve others through creative communication.

Today, as the world battles its first pandemic in over 100 years, I couldn't help but feel powerless like so many others. We're not doctors or nurses. We don't manufacture respirators or protective face masks. Nor are we scientists who work around the clock toward an effective treatment or vaccine. We're marketers, advertisers, designers, imaginative masses adjusting to a new reality along with billions of others.

But we're not powerless after all. As communications experts, we excel at making people smile, and we have the outstanding ability to connect with others. Very often this is through good old-fashioned humor. It's clear that people around the world could use a little more laughter in their lives right now. That isn't to say we should be irreverent, offensive or insensitive. What we can do as marketers and as individuals, however, is brighten someone's day by taking on the role of the entertainer. Laughter is an effective medicine for our mental well-being. Humor can and should be given in daily doses, and levity at the right moment can reduce anxiety levels across an entire culture.

To strike the right note, we have to deliver our messages with empathy and by staying true to ourselves. Otherwise we run the risk of being disingenuous or tone deaf. So far, I've been encouraged by many acts of comedy. Like the co-worker who joined a video conference dressed as Chewbacca. The agency that's forged ahead with its wry and oftentimes snarky tweets. Trevor Noah and The Daily Social Distancing Show broadcasting from his apartment. The hilarious sports video of an impressive marble race, or even the Magnet Theater in New York, which is trialing its improv format online from the confines of cast members' homes. All of these gestures serve a growing need to help each other and help humanity cope with the terrifying unknown.

For brands, it's trickier. First and foremost, businesses should be doing anything they can to join the battle that we're facing in meaningful ways: producing much-needed medical supplies, supporting communities and taking care of their employees, to name a few. Yet it's possible to do all of that while also finding opportunities to make us smile or even chuckle. At the end of the day we're in this together and a sincere act is a sincere act, even if that act is simply intended to make you grin.

I was inspired to write this piece last week, when, on my first day of working from home, I posted a selfie on LinkedIn dressed in a coat and tie—attire I reserve only for weddings, funerals and, now, pandemics. The gesture was originally intended for my co-workers to add a little lightheartedness during these pretty serious times. Then I figured, why not do the same for my network? 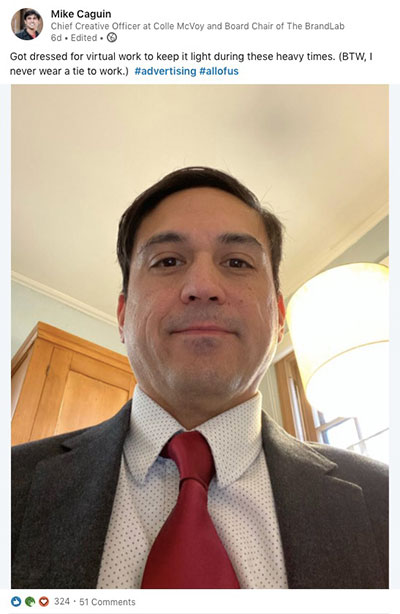 At first, I was surprised when it became my top-performing post ever. But after reflecting on it over the past few days, I've realized that people (me included) are hungering to feel some sense of normal, even if it only lasts for a few seconds. Making someone else laugh is a meaningful gift to be given, and it might just be exactly what the metaphorical doctor ordered.

What's next for me? I'll continue to create moments of fun and look for the long-awaited time when brands can do the same. Maybe I'll even try making a complete fool of myself on TikTok. If it would help others, I'd be up for it. 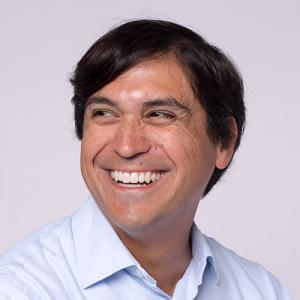