Advertising Has Changed a Lot in 15 Years, but Not as Much as My Trousers

Some things in our business never go out of style

The photo below popped up on the Clio Awards' Instagram and Twitter pages a few months ago, because I guess they hate me. That's me in the white pants and mandles winning an award for some Bud Light radio I'd done at Downtown Partners.

I'd like to say all cool copywriters dressed like bloated Russell Brands in Miami in 2005, but I don't believe that to actually be true. Anyway, it reminded me of another story from that same point in my life.

I was on a bus once with BBDO's global CEO Andrew Robertson, having an awkward small-talk conversation. (The power imbalance between us was too great for it to have been any other kind.) I said something profound like, "Wow, billboards seem to be the cool thing again." He smiled his perfect smile and just said, "Plus ça change…"

At the time, all I thought was, "Fuck, I gotta learn how to drop dope shit like that into conversations." But over the years, I've started to think that's pretty much true of everything in this business.

I've been doing this for 25 years now, steadily rising up in the ad world to my current point of greatness. And yet, someone has pretty much called me a dinosaur since my picture was taken.

"Radio ad? Man, you're wasting your time if you're not writing website copy."

"You're still trying to sell shit?? You need to be focus on saving the world with that toilet paper."*

"It's about the tech. We need to be focusing on mobile."

"You're going to the Clios? LOLZ! You need to get your ass to CES."

Yeah, I get data. I really do. What I really get about it is its place. Like mobile, websites, and yes, radio, these things are there for one reason—to help you and me bring our awesome brand-building, shit-selling concepts to life. Creativity. Remember? That's what hasn't changed. Ideas. Also, not changed. There's no difference between Nike's lovely old-timey 4:3-aspect-ratio "If You Let Me Play" film from the '90s and their Colin Kaepernick new-timey Instagram post from 2018. IT'S THE EXACT SAME IDEA. And it's just as powerful today as it was when I was wearing those mandles.

Right now, I'm truly scared of A.I. Not because robots are going to take over and kill us. (OK, yes, that.) But mostly because somebody is going to tell me I'm wasting my time not getting full on into it instead of doing whatever it is I do now. And this person will have just replaced the person fired for focusing everything on data.

Our management team got together a few weeks ago with corporate comms to go over Cannes speaker categories. For the past few years, everything that the festival wanted to hear about was around tech and data. Looking through this year's list, all they seem to want to hear about are opinions on crazy things like "brand" and "creativity."

*I totally stole the toilet paper bit from Jeff Goodby. 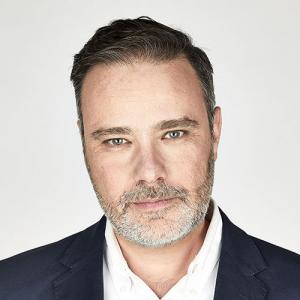