Prime Video Used 500 Drones to Host Karaoke in the Sky

2,000 fans sang along to 'Scatola' from a new Laura Pausini film 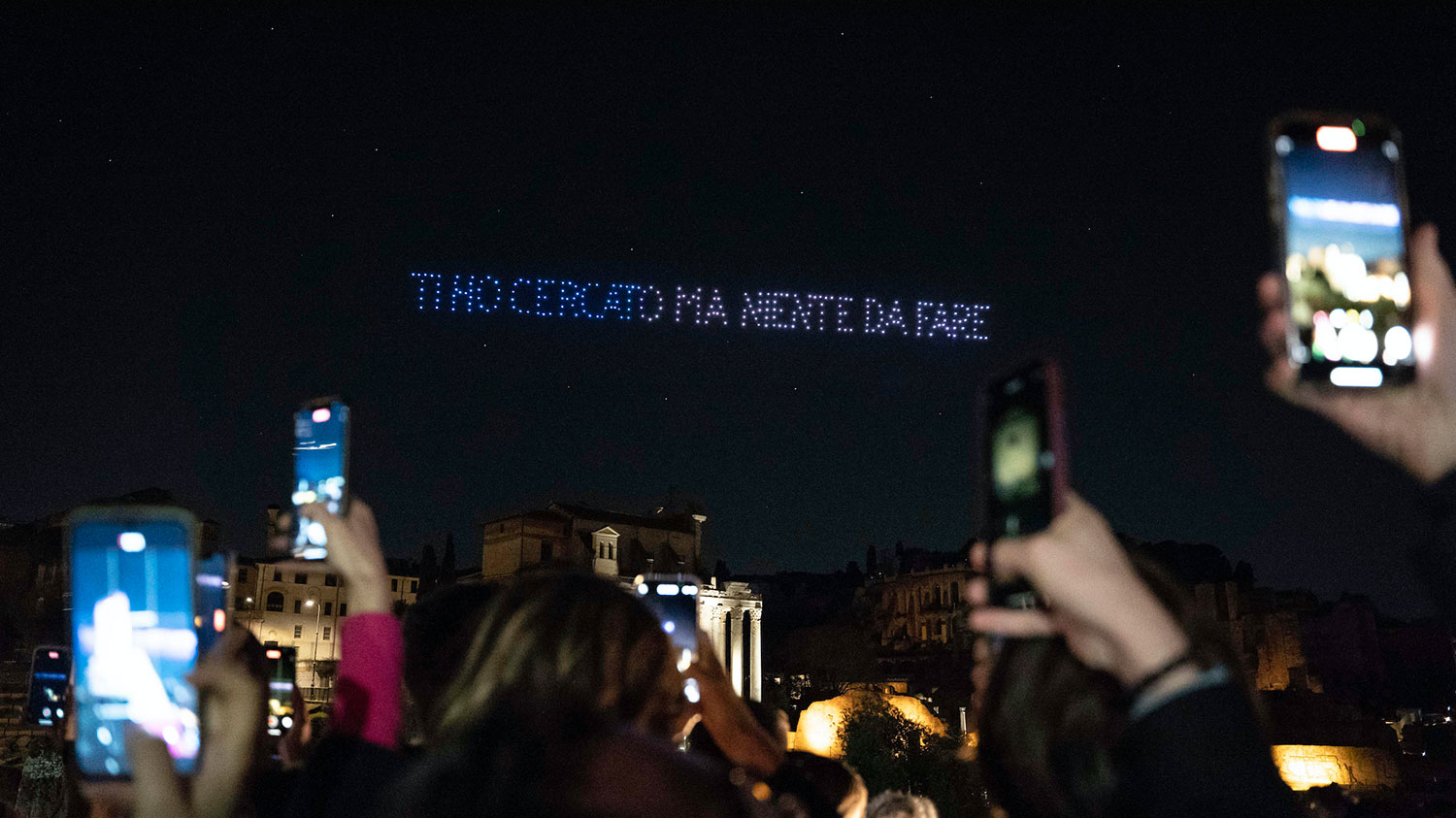 Laura Pausini is one of Italy's most famous singers. But what if she didn't win the Sanremo Music Festival's popular song contest in 1993? That's the premise of Laura Pausini—Piacere di conoscerti (Pleased to Meet You), a movie starring the 47-year-old singer that launched earlier this month on Prime Video.

To promote it, Ogilvy Italy went high ... sky high, using 500 drones in Rome for a night of karaoke in the sky.

Dubbed "Staraoke," Ogilvy Italy synced 500 drones to light the sky with lyrics from "Scatola," an original song from the film. Lyrics were synced with the music, making the sky one large karaoke screen. Some 2,000 fans gathered in Rome near Fori Imperiali and the Colosseum to belt out the song. Pausini herself even joined in on the fun. Drones went 300 feet skyward, no small feat, given the proximity to the Vatican. Production company T3kne worked with Artech and Dronisos, a French agency that specializes in drone technology, to sync the music and the drones.

The movie, based on an idea of Pausini's, was written by Ivan Cotroneo, Monica Rametta and Pausini, and directed by Ivan Cotroneo. Francesca Picozza serves as creative producer and Gherardo Gossi (Diaz, Le sorelle Macaluso) as the director of photography.

Muse spoke with the creative team at Ogilvy Italy about choosing the location and how karaoke drones came to fruition.

Muse: Have you ever created a campaign like this before?

Giuseppe Mastromatteo, chief creative officer, Ogilvy Italy: "Never done before" was a key goal behind the project: We were looking forward to making something unexpected happen, something that could amaze people and resonate with their hearts, and at the same time challenge ourselves and our collaborators to make this happen. It was game changing to have such a big and prepared team at our side, combining all the skills needed in terms of technology, location and sound. It was a rush until the very last minute, but when we saw the drones fly the first time, we were proud to see something that people thought would be impossible become a reality.

How did you come up with the drone/karaoke concept and select the location?

Lavinia Francia, creative director, Ogilvy Italy: We wanted to leverage how passionate Pausini's fans are about her music. Since she had just launched the official soundtrack of the film, Scatola, we thought it would be great to leave the stage to her fans and their voice singing the song out loud. So, we came up with the karaoke idea and decided to make the sky the screen for people to look at.

Rome was for sure the best option to host the event. The opportunity to conjugate such an innovative experience in terms of technology with such a historical and fascinating scenery made the deal. The Colosseum's Archeological Park also met all the security requirements for the drone flight and made it easy for everyone to see it, even from afar.

What was the biggest challenge? Keeping the drones in sync with the music?

Francesco Basile, creative director of Ogilvy Italy: The whole project was a big challenge: 500 drones is a huge swarm, and the fact that it was flying over a historical site required special permissions. And of course, the sync with the music had to be perfect, and this aspect represented the biggest challenge. The whole project required up to three weeks of programming and testing with an international team of technicians, choreographers and sound engineers.