Mnemonics, Motifs and Mashups: Sonic Branding on the Silver Screen

A journey through some well-known production logos

Image by Gerd Altmann from Pixabay

When we think about sonic branding, the first thing that comes to mind is probably the quintessential asset: the audio logo. More often than not, we hear these musical manifestations of brand identities in the form of lighthearted insurance jingles, synthy technology tags, or even automotive audio cues.

Every industry has its target audience, especially entertainment. That's because sound serves a different purpose when supporting a 15-second car commercial than it does for a 90-minute feature film. It's only appropriate that mnemonics for movie studios sound more cinematic.

Meet the first cousin of the audio logo: the production logo. More accurately, the scored production logo: a motion graphic animation of a production studio visual logo synchronized with sound effects or music that plays before a motion picture. These longer logos give production companies and studios a chance to showcase their identity in the same format as the film, featuring flashy visuals and sound design. While modern audio logos evolved mostly from early radio jingles, production logos have a different origin story.

Rewinding to the Roaring '20s

At the turn of the century, in the Golden Age of Hollywood, cinemas were still in the Silent Era. This era was never truly silent, per se. Bands and orchestras usually performed live accompaniments consisting of rearrangements and improvisations of classic tunes. The subsequent Sound Era of motion pictures opened up new possibilities wherein audio was more commonly affixed to visuals. Audio-visual integration meant more custom compositions and original scores for the movies themselves, and in the case of sonic branding, an opportunity for the opening credits. Around this same time in the latter half of the 1920s, when the NBC chimes first graced the radio airwaves, Metro Goldwyn Mayer recorded their mascot, Leo the Lion, for his inaugural roar.

Among the first vanity cards to hit the box office besides MGM were RKO Radio Pictures, Universal Pictures and Paramount Pictures. But none ever achieved the same legacy as the "Fox Fanfare." Twentieth Century Pictures (later 20th Century-Fox, and now 20th Century Studios) most notably introduced their production logo around the same time as the other "Big Six." Alfred Newman first composed the bombastic intro in 1933 (pre-dating the merger with Fox Film Corporation by two years), and in 1953 he further extended the foundation of triumphant horns to herald the addition of CinemaScope. In the 1970s, John Williams went so far as to compose the intro to Star Wars in the same key signature (Bb major) with the same orchestral instrumentation, adding a newfound fandom to the fanfare. Despite its comeback, there is a new contender for the best opening credits.

Today, perhaps the most well-known (or at least, most newsworthy) example of a production logo is none other than Netflix. For many original titles, this is the only thing you hear before the show starts. When nothing but the Netflix logo plays before a show or movie, it's bound to become stuck in your head. Users are watching an average of three hours per day, meaning someone could experience the opening title as many as three times in one sitting; the compounding effect could make almost any audio cue into an earworm.

Since it debuted in 2015, the streaming giant's sound has become a cultural phenomenon that has even appeared in a mnemonic mashup with T-Mobile. Not only has it gained cultural relevance, but it has become even more recognizable than the HBO "Static" signature. Surprisingly, Netflix surpassed HBO on the Veritonic Audio Logo Index between 2019 and 2020. This victory is a testament to the effectiveness that sheer repetition has on recall; a 5-year-old asset can become more memorable than an entertainment industry competitor that's been around for 27 years. As impressive as that may sound, recall data is not the only factor of a successful sonic branding strategy. Without storytelling, it becomes significantly more challenging to build on the idea rather than the equity alone. And Netflix was no exception.

On the 100th episode of Twenty Thousand Hertz, we finally learn the backstory behind the two-tone "Ta-Dum," as the internal team at Netflix colloquially call it. While the story of its creation may be enlightening, the storytelling behind the audio branding falls flat. Before this podcast aired, Redditors speculated that the "knocking" element was either a soundbite or reference to Frank Underwood slamming his fist against his desk in the Season 2 finale of House of Cards. Instead, the real answer is that there was no connection to the content at all. In actuality, composer Lon Bender recorded himself tapping his wedding ring on his bedroom cabinet. Without giving any credence to the fan theory, after analyzing the waveforms on top of one another, the double-impact transients align almost identically. While this particular reference may have been ill-timed with the fate of the show, the general idea of alluding to the programming as an inspiration for the compositional components would have told a more interesting tale.

Another "Easter egg" that is never explicitly addressed is whether the dual percussive strikes mirror the syllables of "Net-flix." As for the ambient pad? Up until this point, the only lead to go on was the transcription uploaded alongside the trademark registration application titled, "BLOSSOM NOTATION." That turned out to be the codename of the creative concept, and the atmospheric aura was revealed to be a guitar swell effect recorded by Charlie Campagna in the early '90s. Quality aside, it's a stretch to make a strong connection with the project when the recording was not only unintended for the brand, but comes from another century altogether.

When Netflix hired Hans Zimmer to quadruple the length of their opener as a production logo for captive audiences, they were in effect further defining their audio identity by virtue of its iteration; forced to assess what components of their identity they really had to expand upon. However, an audio logo alone is not inherently an audio identity. Similar to the fast-paced jingle culture of commercials, the title card lasts only a short few seconds. And while brevity ensures there are no delays or interruptions to binge-watching content on the ubiquitous streaming platform, this leaves very little material to work with.

In the end, both literally and figuratively, we're left with only the two-note motif. If you're not looking at the screen, that's almost a full 10 seconds before the ending when there is any significant connection to the original audio logo. It feels more like two separate ideas. Where did the "blossom" go? Replaced by clichéd (albeit, beautifully recorded) film scoring techniques. Even the wedding ring is swapped out for a tympanic heartbeat.

After listening to the entire design process, and then having none of that translate to the new version, the extension feels a bit lackluster. It feels closer to an audio logo for Hans Zimmer than for Netflix. It's even written in his favorite key signature (technically the relative major of his favorite key signature revealed in his MasterClass trailer, D minor) instead of D major. Looking back on the example of John Williams' attention to harmonic detail, this could have been a lever to pull to add continuity to the two works. When there is no audio aesthetic, no audio branding guidelines for key signatures, or instrumentation, no connection to other media like podcast themes, consistency is all but lost. In this case, only the rhythm remains.

The Future of Fanfare

If we can learn one thing from all of this, it's that storytelling adds a dimension to developing a given audio identity that lends itself to creating "living" logos. Developing fanfare that can have variations, remixes and mashups that can still follow a narrative enables the possibility to feel more "alive," even timeless. In revisiting some of the earlier production logos that are still around today, streaming and entertainment brands like Netflix, Hulu and Amazon Prime Video can take note—both on and off the silver screen.

One thing to be conscientious about is user attention and engagement. When there are two or more production logos back-to-back, that can quickly add up to minutes of delay between a viewer and the feature. There's a fine line between setting the stage and stealing the show. At a certain point, even though the audience is captive, they may lose interest. One technique that doesn't sacrifice length, but deepens immersion, is quoting the motif of the movie in the mnemonic itself. The Fox Fanfare does this seamlessly before X2: X-Men United, wherein the climax of the searchlight sound compositionally quotes the 5-note theme of "Suite from X2" on the soundtrack.

In a slightly inverted method, by maintaining the original melody, but swapping out the instrumentation, both identities can co-exist within the same timeframe. Take, for example, the end card of Westworld. You may hear the HBO audio ID before the episode, but after the credits, there is a particular Warner Bros. vanity to take note of. This four-note reduction of the full fanfare (adapted from "As Time Goes By") is played on a detuned upright piano, as if to reference the player piano leitmotif heard throughout the show.

What would the Netflix "Ta-Dum" sound like reskinned with the Stranger Things synthesizers? Or with the ominous overtones of the Ozark OST? Currently, more people would rather stream from home than go to the theaters, so it's time to rethink what the experience will sound like, and how to keep it fresh for years to come. 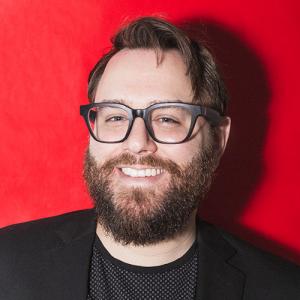 Eric Seay
Eric Seay is co-founder and CXO of Audio UX, where he combines his passion for the artistic expression of music and the study of psychoacoustics. From soldering circuit boards to sonically branding global corporations, he has a deep understanding of the entire vertical market of sound.
More from Eric Seay