Caterwauling comes to R&B and Latin beats, too

Feast your ears on the ferocious feline fret-work of the Meow Mix jingle reimagined as a heavy-metal anthem. It's part of a fun campaign from Publicis' PSOne that recasts the iconic "Meow meow meow meow" track in various musical styles.

Hey, do they know "Cat Scratch Fever"? Does anybody get that reference?

Sure, Meow Mix and metal music have blended before. This montage of old commercial footage paired with the Septicflesh death-rock track "Communion" provides a particularly nerve-shredding example.

This time, however, the J.M. Smucker-owned brand itself cued the caterwauling, and the setlist continues below, with tabby takes on R&B, country and Latin music styles:

Chill beats, but those harmonic hairballs really need to work on their lyrics.

"The client handed us the gift of an iconic jingle, and they really had one ask: Make it famous again," PSOne executive creative director Jason Gorman tells Muse. "With the growth of streaming services and the prevalence of music in our day-to-day lives, the opportunity was right to strike with a more contemporary take, in genres that spoke to a wider range of people."

Ron Travisano of the long-gone Della Femina Travisano & Partners agency developed the original TV campaign in the 1970s, which showed kitties meowing in sing-song fashion and prancing across the screen. The concept has been revisited in different forms several times since. There was even a mobile sound booth for neighborhood sing-alongs a few years back.

Fast-forward to the world of 2019, where "cat parents are an amazing group of people, and they're passionate when it comes to consuming cat-related content," Gorman says. "So we wanted to offer them something that they would genuinely find entertaining while also delivering on our history of knowing what cats love."

Cat parents, eh? Well, that's how owners tend to see themselves, so we'll go with it.

And yes, of course there are cat-themed album covers, with those shaggy metal-heads from "Endless Hiss" stealing the show paws-down (click images to enlarge):

Those mesmerizing metal cat-eyes are the stuff of nightmares. Kiss would approve: 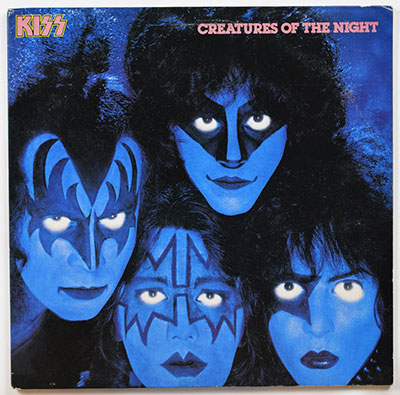 "The creation of the music tracks was where we, as the agency, really had to put our trust in our partners at Human," Gorman says, referring to the audio production house that handled the recording. "We provided specific genres and some direction as to the tone of the music, but they ran with it. Each briefing call was broken up with bouts of laughter at the absurdity of our endeavor. Hearing adults sing verses of 'Meow meow meow' over a speaker phone back and forth is a reminder of what you love about advertising."

"They gave us tons of demos in every genre," recalls associate creative director Shaun Bruce. "When a tune would get stuck in our head to the point where it made us question our mental health, we knew we had a hit on our hands."