What is it about Emma Westenberg?

We wondered this while watching "Burning Oceans Into Deserts," a short film she directed for jeans brand Hardeman in 2017. It's a dreamlike spaghetti western-style thing, but it's also got vestiges of the New Wave, except way more diverse than we can recall either genre being.

It is polished but imperfect. Adults are dressed like children, children like adults. Some pauses feel unnatural. A woman describes an androgynous cowboy thus: "Like there's tiny lightnings around him."

Later, he will teach her how to become a cowboy, too: "It's all about how you stare." During this scene, she wears an ill-fitting jean bikini top and miniskirt, one so short that you can see bloomers sticking out. It's more childish than sexual, almost a critique of how fashion films depict people in improbable outfits, meant more for glamour than for living.

So many things are like this in Westenberg's universe. There are curious costume changes, a perpetual sunsetty light or else total starkness, oddly frank close-ups. She peoples her worlds with vivid color, contrasting sharply with vintage-inspired work that hides racism behind a desire to be "authentic" to a period.

There's a slackness to her work, expertly gripped; it saunters, cool and timeless, yet subversive in ways that shouldn't be. Pubic hair. Imperfect teeth. Spit. Stares that don't slide demurely away from the camera. Women aren't looking at you, looking at them; insofar as they give any fucks at all, it is men who take on the feel of objects, cowboys and camera eyes alike.

Under such a gaze, the men are often awkward, vulnerable in their efforts, sometimes shy and anxious. It is neat, and also strange, to watch men behave the way I feel.

Even at the end of "Burning Oceans," when the love interest succeeds in transmitting the cowboy soul to its heroine, she rides off alone, his job in her life complete. Two other women, weirdly posed, watch her go.

I don't know why I've fixated on this video specifically to try to understand Westenberg's body of creation, which escapes neat explanation the way complex work should. "Burning Oceans" is itself a follow-up to "Blue and You," which won best new fashion film in Milan's Fashion Film Festival in 2016.

Everything about this origin film is jarring—the narrator's blasée reading of a requiem for a decaying place; the bright-eyed family with blue spaghetti sticking out of their mouths; the man who speaks, and whose voice is not his own but a woman's.

Even the obligatory poses, typical in a fashion film—people standing around like mannequins, too chic for reality—get abruptly interrupted, in one instance by a woman slamming a sack full of glass onto the pavement.

Who is Emma Westenberg?

I'm walking through her past when I should be looking at what she's done lately. It's easy to do; her stuff invites a backward slide, like falling asleep when all you meant to do was rest your eyes. I mean, have you seen "A Fallen Angel," the jerky, playful piece she made for Andrea Diodati in 2015?

Charlie Chaplin meets Jean-Luc Godard, set to Jon Brion's cover of "He Needs Me." It's the story of an angel who grows dependent on a beautiful New Yorker, who takes him under her wing until she grows bored and he has no choice but to return to the sky, bewildered.

It's a connection rich with possibility, but quick as a hit-and-run.

All right. I'll stop memory-laning you.

Westenberg, her powers of direction now stabled at Partizan and HALAL, did two things lately that you know about: She directed last month's "The Pure Experience," Michelob Ultra's Super Bowl ad featuring Zoe Kravitz; and Janelle Monáe's 2018 music video for "PYNK"—the one with the fun vulva pants.

"The Pure Experience" was ASMR-inspired and earned over 14 million views. "PYNK" isn't far behind, with nearly 12 million at last count. It's safe to say Westenberg, born in Berkeley, Calif., but raised Dutch, has exploded into advertising's immediate directorial orbit like a Lush bath bomb, a spiral dance of color and shadow.

Below are those videos, and a Q&A we had with her. 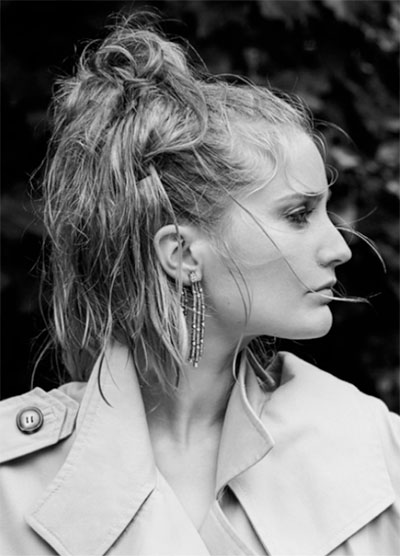 Muse: Hey, Emma. Tell us your origin story.
Emma Westenberg: I was born in California to two Dutch parents. We moved back to the Netherlands when I was only 1. I grew up in a small town close by The Hague, a city on the western coast of the Netherlands.

After high school, I moved to Amsterdam and went to art school there. After graduating, I lived and worked in between Amsterdam and New York City until moving to Los Angeles about half a year ago.

What nourishes you creatively?
I like to read, and drawing helps me flesh out visual worlds and characters.

How did you get started? What mountains did you want to take on?
I started shooting videos when I was really young, like 8, with my mom's VHS camera. I'd shoot cooking shows with my best friend, pretending to boil the cat called Kees, or making documentaries about our neighbors who didn't agree.

Why Partizan?
Everyone at Partizan and I get along well. I am also a big fan of Michel Gondry's work, who is one of the founders.

You've got this style that's vivid, super-sensory, unapologetically female. Would you agree, and is that intentional?
I agree that my work has a feminine touch to it. I think it's because my films are made from a female perspective. I translate in my work how I experience the world or would like to see it.

How was working with Janelle Monáe, and what was your vision for "PYNK"?
It was such a wonderful experience working with Janelle Monáe and her team. They are true gems. As "PYNK" is part of the Dirty Computer emotion picture, there was already a starting point in narrative for the video. I wrote a treatment with this and the song in mind. It was a very collaborative experience where we were constantly going back and forth with ideas, movements and visuals.

Talk to us about the Michelob Ultra ad. What did you want to bring to the table?
I got the chance to pitch on the commercial and really loved the concept. I wanted to explore the visual aspect to the sensory movement that is ASMR, in addition to the sound.

You're often grouped into this charge of female creatives whose time has come. Do you have feelings about that?
I am happy people are actively looking for more diverse voices. I think it makes for a way more interesting media tapestry.

What's your signature?
I like original characters, colors and humor.

Is there anything we don't know, or should have asked?
Nope. I'm just happy to be here and be able to work with all the incredible people I get to work with.

Anything upcoming, fresh or exciting you want to share?
I'm working on a feature movie! But that's all I can say at the moment.

To whet appetites for the latter, we'll conclude with "The Still Life of Estelle," a short film Westenberg wrote, directed, produced and art-directed as her graduation project from Gerrit Rietveld Academy in 2014. It was later selected for the Dutch Film Festival's student competition.

"Still Life" builds tension with patience, made more excruciating by the flat-tailed mermaid dress Estelle has to wear for the terrible catering job she does for money. It's a story about male entitlement and scrutiny, building a terror that diffuses with a strange twist, unexplained but fertile for speculation.