More bangers for your bucket

Have you ever craved KFC … in hip-hop form?

Sid Lee Paris satisfies such hunger with "Bucket Bangers," a Spotify playlist of 46 tracks from the U.S., France, Russia, Brazil and Germany. Celebrating the brand's deep connection to rap music, each track name-drops or alludes to the iconic chicken chain.

These cuts are fly! Or, maybe that should be … fry.

In "Touch the Sky," Kanye recalls his early days: "Before anybody wanted K. West beats/Me and my girl split the buffet at KFC."

"Ode to" by the Beastie Boys get old-school, extra-crispy political: "The new Reagan policy is getting the best of me/You know that tendency—KFC baby!"

Madonna's "Where Life Begins," while not exactly rap, includes the line, "Colonel Sanders says it best, 'Finger lickin' good!'" The song's about "eating out" ... but not at KFC. (She likes it hot and spicy!)

"This dude walked in lookin' strange and kind of funny
Went up to the front with a menu and his money
He didn't walk straight, kind of side to side
He asked this old lady, 'Yo, yo, um ... is this Kentucky Fried?'
The lady said 'Yeah,' smiled, and he smiled back
He gave a quarter and his order: 'Small fries, Big Mac!'"

This stuff deserves a parental advisory for fowl content.

"The idea came about when we realized just how many exceptional hip-hop artists mention KFC in their songs," Sid Lee Paris creative director Celine Mornet-Landa tells Muse. "We started thinking and realized, truthfully, these were the best copywriters to talk about KFC. And we thought, 'What if we compiled all these artists and pay tribute to them, the same way they've been paying tribute to KFC for nearly 40 years?' "

She adds: "We also wanted to be able to offer real content to fans of KFC and hip-hop. That's why we made a playlist, rather than just an ad. To be able to offer this music to listeners the way it was written, by the artists, unadulterated."

Her husband Clément Mornet-Landa, also an agency creative director, describes picking hours of tracks as "laborious. We did a lot of research through specialized websites, but we also thought it was important to talk to hip-hop fans themselves, which was helpful because they brought us some hidden treasures we wouldn't have found otherwise. And of course, we used Spotify."

To ensure no musical mentions of KFC get overlooked, fans can submit suggestions through social networks to enhance the playlist.

"It's an opportunity to just have some fun with KFC and hear about it in a way that's not expressed in ads," Celine Mornet-Landa says. "And it serves as a reminder of just how much KFC is part of pop culture."

"Yes, we just saw that," Clément Mornet-Landa says. "Showing how deep a brand is rooted in people's lives and hearts is worth so much more than all the marketing rhetoric in the world."

You can get a taste of the campaign's out-of-home work below: 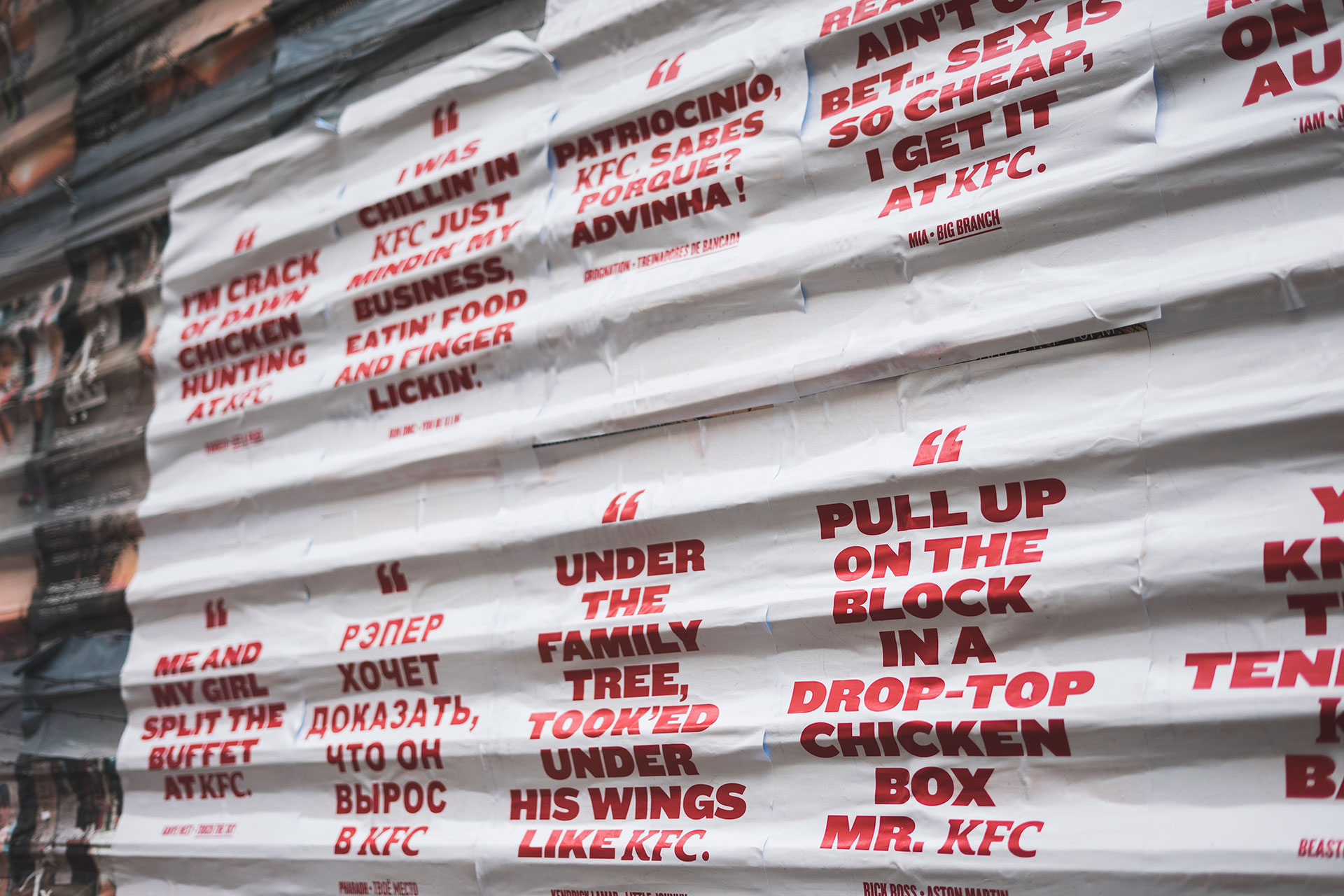 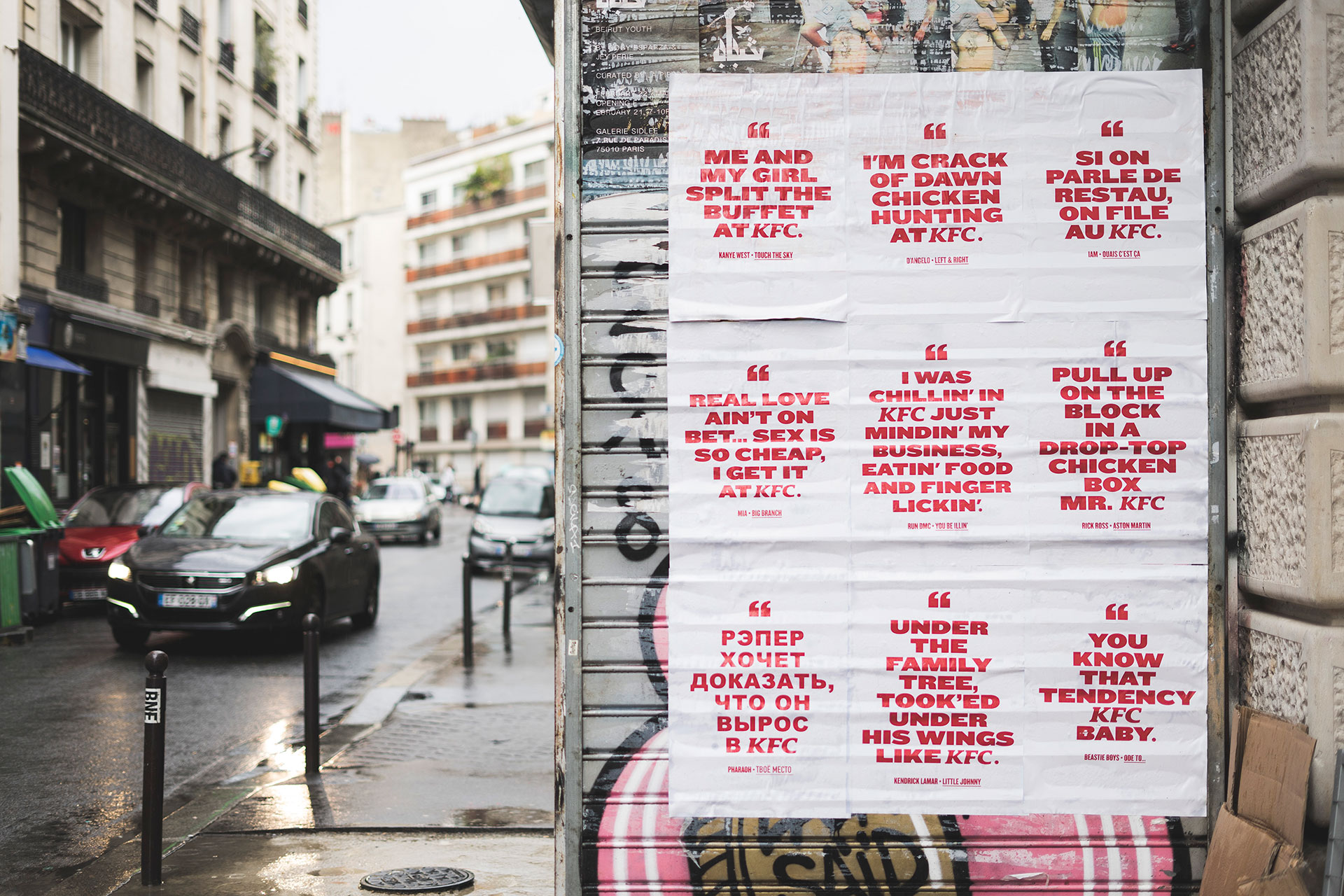 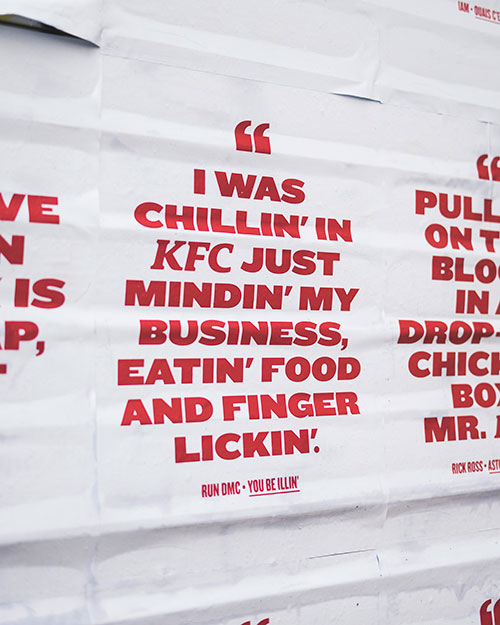