Just Eat Orders Out for Snoop Dogg, Who Fixes the Brand's Jingle

He chills with giant waffles, too

Who knows the munchies better than Snoop Dog?

It's a feast for the senses. (Well, not smell and taste so much, unless you're eating while you watch.)

In the ad, Just Eat's jingle, a staple of late-night TV commercials across the U.K., leaves a bad taste in Snoop's mouth. So, he Snoopifies the track in his trademark style:

"Did Somebody Say Just Eat
Me, Get delivery like a G
See hungry Dogg's gotta eat
I get mine every day, every week
Chicken wings to the crib I'm sitting in

Burger in the low low
Hope they kept the pickle in
Wonton on a catamaran
Oodles of noodles, thank you my man

Tacos to the chateau, please
Did Somebody Say
Just Eat
Private jet in the night sky
My man hang-glide by with my fried rice, riiight."

"Snoop's remix allows us to connect with a younger consumer demographic, while also providing a bit of fun for our existing customers and fans of the original track," says Just Eat marketing chief Susan O'Brien. "At a time when we could all do with a little joy in our lives, we hope the refresh will get people bopping in their living rooms and rapping along with Snoop."

Cold pizza rocks, so this Sponge-Bob-style slice be chillin': 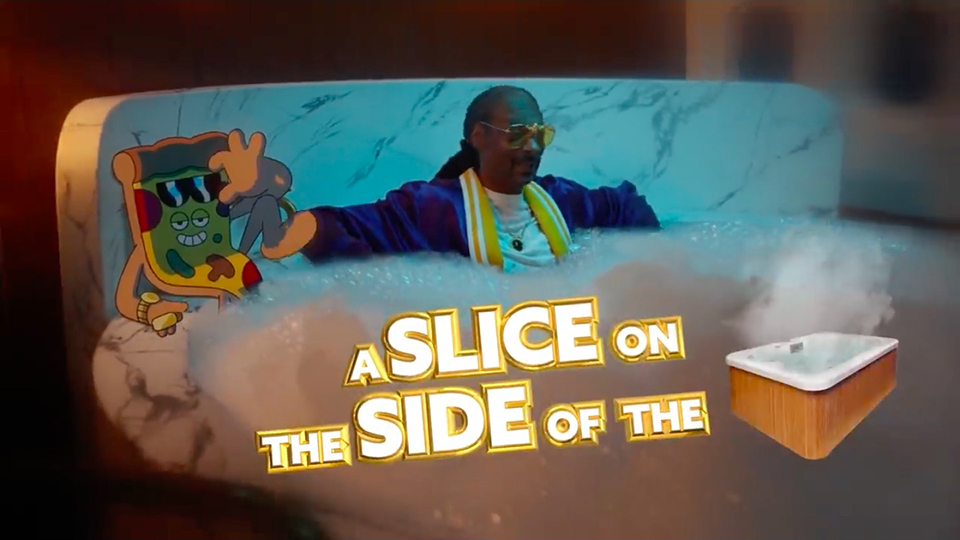 "What could you not love 'bout a slice on the side of the hot tub?
What you gonna do boo
Chocolate fondue right on cue
Even dipping in the sea
I see food, seafood sees me."

Below, McCann creative directors Rob Webster and Alexei Berwitz satisfy your appetite for deets on the campaign:

From success to excess.

"We pitched for the Just Eat business at the back end of 2018," according to Webster and Berlitz. "The winning platform 'Did Somebody Say Just Eat' aimed to launch the brand into popular culture with an ear-worm so insanely catchy, it would land in the cerebral cortex and never get out. Once we'd embedded the line and the song in people's minds, we could start to mess with it. After a full year's rotation, we knew our jingle was dividing the nation, like Marmite – a cultural truth we could work with.

"When the creative team landed on the idea of a hip-hop titan re-mixing the track because he hated it – Snoop was right at the top of the list," say Webster and Berlitz. "He's got a global fanbase, multi-demographic appeal, but most of all he had the wit, self-awareness and acting chops to pull the whole thing together and land the knowing humor at the heart of the idea. Even so, we ran a few names through research. Our star needed to appeal across different markets, cultures, age ranges and demographics. Snoop was the winner across every metric."

"We shot the film in mid-march at the iconic Disney studios in Burbank — the actual studio was where they filmed the original Mary Poppins so we were in auspicious surroundings," Webster and Berlitz report. "Working with Snoop was exciting, fun and a little daunting. He's a global icon. One of the founding fathers of modern hip-hop. There was a strong sense that when you're around him, you needed to be on top of your game. Snoop was heavily involved too. He worked on the music with his team of producers and also had a strong point of view on how he looked. If there was something he didn't like or didn't think was a natural fit for his style it, wasn't going to fly."

One of L.A.'s last big commercial productions (for now).

"Visually we wanted the film to mirror a genuine, cool, hip hop video," the creative directors recall. "We wanted it to be a feast for the eyes. With slick production and contrasting scenes to keep it fresh and surprising. And also we wanted it to be fun and make people smile. "We were the very last commercial production filming in LA with all others either being canceled or stopped. We were also on one of the last planes out of L.A."

"We knew Snoop was formally on board with the campaign when we first took him through the storyboards and the intended styling," they say. "We left that first formal face-to-face meeting with him committed to commissioning not only his very own piece of 'Did somebody say Just Eat' iced-out jewelry pendant—but also a custom branded velvet jacket and tracksuit, both of which can be seen in the commercial. We noticed that both wardrobe items never found their way back to the set, so can only assume they're housed safe and sound within Snoops home."

"The idea was signed off at the back end of 2019 and originally scheduled for release mid-April 2020. For many markets, this was right around the virus peak. Just Eat and other food-delivery companies found their roles transformed during lockdown. Protecting the health of customers and couriers while keeping food supplies going became the new focus, along with supporting the National Health Service and key-workers with discounts, support packages and other initiatives."

…until the time was right.

"With Just Eat playing a meaningful role during the coronavirus peak, when infection rates started to fall, they had banked a lot of goodwill. Months of lockdown and endless Zoomvertising left a captive audience hungry for something different. The meme culture around the pandemic suggested that people hadn't lost their sense of humor, and that the right kind of funny would be widely appreciated."

"Takeaway culture is now a bigger part of our lives than ever before. When the world feels chaotic and strange – a takeaway represents a taste of normality. A little bit of joy that helps us forget about the uncertainty all around. Just Eat has always understood that. The Snoop Dogg film was designed around that insight of delivering joy. Hopefully, it provides some light relief for everyone who sees it."