They bonded years ago at a talk about creativity

Leonard, co-founder and creative chief at agency Uncommon in London, interviewed Pop on stage at Cannes Lions in 2016 (when Leonard was still at Grey London). To promote the talk, Leonard asked the punk legend to record himself reciting the Dylan Thomas poem "Do Not Go Gentle Into That Good Night"—one of the great meditations on mortality, and an apt text for the irascible, hard-partying, then 69-year-old rock legend.

Pop agreed, recorded the audio on his phone, and sent it to Leonard. Grey London then built a video around it:

Fast-forward to last week, when a New Yorker profile of Iggy revealed a curious fact about his new album. Apparently he liked Leonard's Dylan Thomas idea quite a bit—as the album includes a track where Pop again recites the poem, this time "over moody peals of guitar, synthesizer and horn."

Listen to a snippet from the track below, and the full track on Spotify.

Leonard was as surprised as everyone else, to say the least. "OMFG," he stammered on Twitter. He and Pop had bonded pretty quickly when they met—in an amusing bit of bro-love, they both ended up going shirtless for the Cannes interview—but Leonard didn't know Pop was rerecording a new version of the Thomas poem for the album.

"A mate sent me a screengrab on Twitter. I was over the moon," Leonard tells Muse.

In some ways, it echoes the feeling Leonard had when Iggy agreed to record the poem in the first place, for the Grey Music Seminar.

"It was that year when everyone was dying—Bowie had died. It was just crazy," Leonard recalls. "I remember calling Iggy's manager and saying, 'Here's the idea I have. You can tell me to fuck off. It's this poem I love...' And then one day I get this email with a sound file in it. Honesty, dude, I won't lie, I had fucking tingles up my spine, sitting at my desk. He did it on his phone. I could hear a park in the background. The guy's voice is just gold. It was incredible." 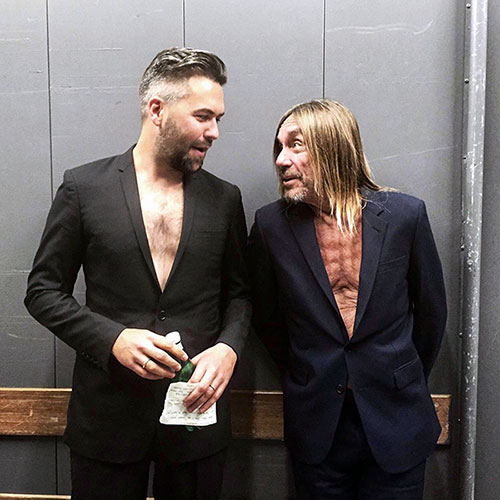 Leonard ended up laying the audio file over a track Iggy had done with Josh Homme, and laid other sounds over that. There wasn't any massive approval process. Leonard got word that Iggy liked it, and that was that.

"He's such a lovely man, and I think a natural collaborator," says Leonard. "You meet some people and they're very wary—and fair enough. But he was genuinely very open. Once he figured out we weren't trying to do something awful, he relaxed into it a bit."

While it's exciting that Pop embraced an adman's idea as art, in some ways Leonard finds it frustrating that such a collaboration should be that surprising.

"A bit of me goes, it's annoying there's that disconnect between creativity in our world and creativity in the real world," he says. "I look back and I fantasize, maybe, that in other times the line was more blurred and it was easier for people to work together. The fantasy at Uncommon has always been that the studio doesn't just have advertising people in it, it just has people in it. When something like this happens, it's so good. It shows people that the blurring can happen. It doesn't have to be, 'I'll give you a million pounds to do this advert. You'll show for half an hour and leave.' It's a genuinely collaborative, cool thing. For me, it validates that this kind of thing is possible."