When it comes to the world of brands, no name may be more synonymous with pop music than Pepsi.

Michael Jackson. Freddie Mercury. David Bowie and Tina Turner. Madonna. Ray Charles. Beyoncé, Britney Spears and Pink. Kanye West. Prince. Nicki Minaj. Bruno Mars. Coldplay. Lady Gaga. Doja Cat. These are just some of the marquee names that have found themselves sharing a stage—figurative or literal—with the brand over the past 50-odd years, thereby enjoying the benefits of being spotlit by one of the highest-visibility marketers in the world, and participating in a tradition of collaboration that stretches as far back as artists like Johnny Cash, B.B. King and Tammy Wynette.

"For over half a century—from iconic creative work with some of the biggest artists in the industry to legendary live performances on a massive scale like the Grammys—music has been the driving force that connects Pepsi and other brands throughout our portfolio to pop culture," says Adam Harter, SVP of media, sports, entertainment at PepsiCo. "All of this would not be possible without the artists, labels, songwriters, producers and countless other talents that have built that legacy together with us."

The company's best-known work in the space spans major advertising campaigns like the 1984 "Pepsi Generation" ad featuring Michael Jackson and Alfonso Ribeiro, set to the music of "Billie Jean"—arguably one of the most iconic commercials in the history of television (and certainly in the history of music endorsements). It includes unforgettable live moments, like the brand's first time sponsoring the Super Bowl Halftime Show in 2007, when a weirdly fortuitous storm saw Prince perform "Purple Rain" in the pouring rain—a moment that seemed blessed by a higher power and remains forever etched in the cultural consciousness. This year saw the brand lower the curtain on an epic 10-year run sponsoring the Halftime Show—the single biggest live show in music—with a blowout finale featuring Dr. Dre, Snoop Dog, Eminem, 50 Cent, Kendrick Lamar and Mary J. Blige. 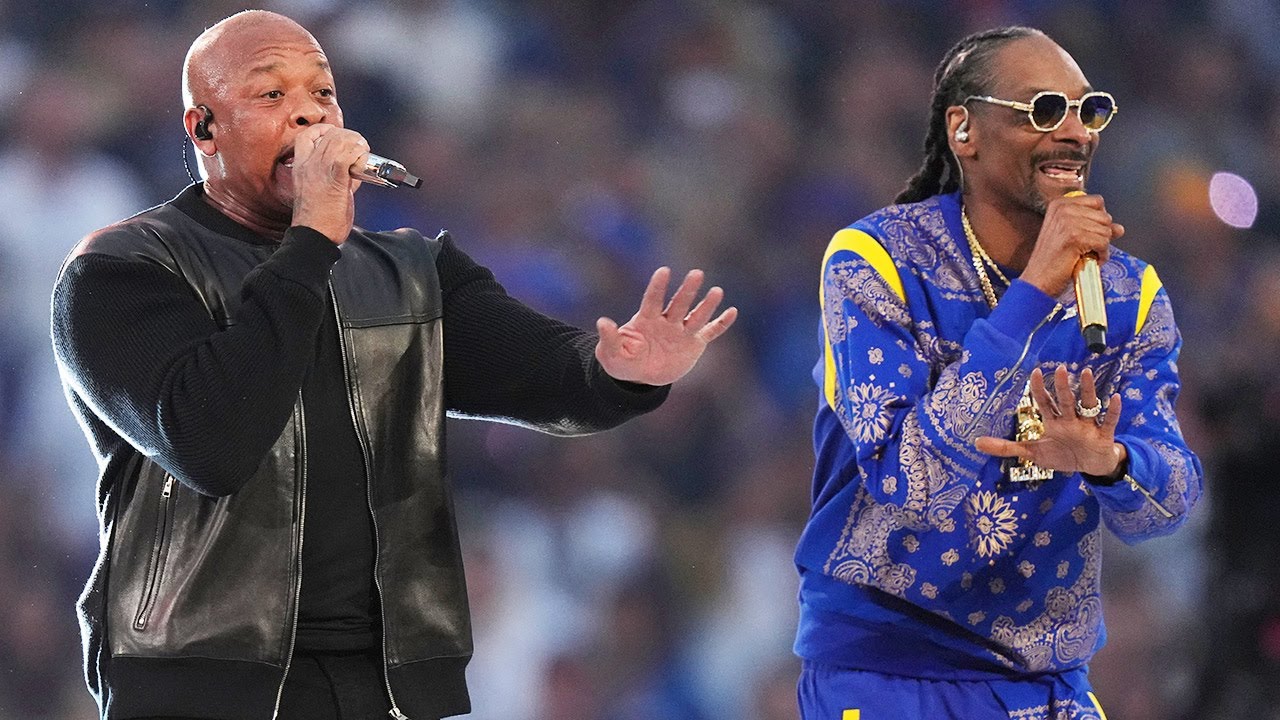 It was a high note to punctuate a history of successes. "The Halftime Show was iconic for our brand and the artists that we worked with: 26 musical acts representing 168 Grammys and almost 1,000 Billboard hits have graced the Pepsi Super Bowl Halftime Show stage over the past 10 years," says Harter. "Our deep consumer connection is evident through the social media results, which included winning the Twitter Brand Bowl three years in a row and earning 72 percent share of voice on social media, among all other brands, in 2022."

To memorialize the herculean feat of putting on a Super Bowl Halftime Show with production partners the NFL and Roc Nation, Pepsi last year debuted "The Show," a 90-minute documentary premiering on Showtime and chronicling the efforts behind The Weeknd's 2021 performance. But Pepsi sunsetting its lead billing for the annual event certainly doesn't mean the brand is stepping back from music.

"Pepsi's decision to leave the Halftime Show is the first move in its much larger strategic shift to bring unprecedented music and entertainment experiences to fans—where they are now, and where they will be in the future," says Harter. "As entertainment evolves, and the way people consume music changes, Pepsi is working to guarantee the level of access and engaging experiences fans have come to expect from the brand."

What makes a star a good partner for Pepsi?

"Each artist brings something different to the table—allowing us to reach new audiences in various ways," says Harter. "The artists must be a strong representation of our brand values and commitment to elevating the consumer experience. Sometimes, we work with an artist because of their ability to deliver unapologetic enjoyment, and other times we turn to them for their shared dedication to supporting and uplifting marginalized voices and communities."

In fact, more and more, Pepsi's focus in the music space includes using its profile and resources not just to amplify some of the music industry's biggest voices, but to elevate rising young talent as well—even those just starting their careers.

"We believe this deeply rooted heritage in music calls the PepsiCo brands to a higher purpose, giving us the ability to leverage our many platforms to amplify the voices of emerging artists, shine a spotlight on their music, and create opportunities to showcase their talents on a bigger stage," says Harter, who has been at the company since the early 2000s, and whose responsibilities have included a focus on music for the last 11 years.

"The essence of brand Pepsi has always been for those who are young at heart, and music, at its core, is constantly evolving and being reimagined. Pepsi's musical collaborations have evolved from generation to generation, but its commitment to unapologetic joy and the power of music remains the same."

This calling manifests in projects like the Pepsi Music Lab. An annual program launched in 2021, it is designed to "remove music industry barriers and create opportunities for artists while also shining a spotlight on the next generation of hip-hop superstars," says Harter. Aspiring artists can apply for mentorship opportunities with established hitmakers and industry insiders—the first class saw little-known talents like Too Fiya, WNTRBRK and Kayla Starchild get a chance to spend intensive time in the studio recording with artist and producer Pi'erre Bourne, whose résumé includes Billboard Hot 100-charting singles for Playboi Carti and 6ix9ine—not to mention a Grammy for his work on Kanye West's Jesus Is King. Pepsi is naturally promoting the program (and young artists) with video content online; each participant will leave with an original track produced and released by Pi'erre and the brand, and Harter says to stay tuned for another round of artists getting their shot in 2023.

In some ways, the company's commitment to cultivating young musicians actually starts even closer to the ground. "The Pepsi Stronger Together partnership with Fat Joe and Friends is a great example of how we're using the PepsiCo influence to positively impact the community," says Harter. "Working alongside one of Mexico's largest and most popular brands, Gamesa Cookies, we teamed up to launch a $100,000 nationwide scholarship program supporting music and arts education for multicultural students [in the U.S.]. Knowing that nationally, Black and Hispanic students under-index on access to creative arts education, this initiative is connecting multicultural artists and radio personalities to aspiring student musicians from diverse backgrounds and is part of PepsiCo's broader Racial Equality Journey."

Other community-focused initiatives supporting the arts include projects like Pepsi's 2021 "New York Thing" campaign, which gave a total of $150,000 through grants to six "real New Yorkers" who are, as Harter puts it, "unapologetically embracing their passions, including performance, art, entrepreneurship and more." (Beneficiaries included Blu DeTiger, the pop artist and TikTok-famous bassist, and Andrew Ousley, a Brooklyn musician who founded the cheekily named group Death of Classical, which produces and performs classical music in unusual and striking locations like crypts and cemeteries in a bid to revive the genre's popularity.)

The brand is also still committed to live sponsorship. In May 2022, Pepsi sponsored the "Strength of a Woman" festival with Mary J. Blige and Live Nation Urban in Atlanta. It is invested in innovative media partnerships—recently co-producing a singing competition show with MTV and TikTok called "Becoming a Popstar" for artists originally discovered on the social media platform (now arguably the lodestar of the entire recorded music industry). Also this year, its Rockstar Unplugged energy drink is, in partnership with Paramount, helping to bring back the classic MTV Unplugged series, sponsoring acoustic performances from the likes of Twenty One Pilots. "From MTV's perspective, the show needed to be authentic with the artist front and center—which is why it was so important that they partnered with a PepsiCo brand that is so endemic in the music space," says Harter.

Such forward-thinking content plays follow the success of the main brand's 2016 script tie-in with Fox's hit hip-hop drama Empire that saw a character land a Pepsi commercial deal in the show, and then the fictional ad getting real airplay on the network, in an exclusive :60 slot between scenes—which, as Harter puts it, blended "fiction and reality."

Meanwhile, music-themed integrations can go even a step further: into the products themselves. Last holiday season, PepsiCo's Bubly sparkling water brand launched its first holiday flavor, Merry Berry Bublé—extending its relationship with crooner and Christmas music staple Michael Bublé, who also starred in a 2019 Super Bowl commercial riffing on the similarity between his and the product's names.

With such a diverse and deep historical presence in music (and such a varied stable of brands), it's difficult to summarize a single reason why Pepsi's efforts have been so impactful. But you might summarize the brand's approach as making sure it's always in the right place at the right time.

"We don't think about music marketing from the perspective of how to activate in the music space through the VMAs or another show," explains Harter. "Rather, we think about it from a brand strategy perspective and ensure that we align the right brand with the right musical moments that attract the right audience. We understand that music is an important way to connect with consumers through the cultural musical moments that matter most and want to be sure we have a consistent presence in that space."

In other words, the show is far from over.