Sing along with the madcap musical, pardner 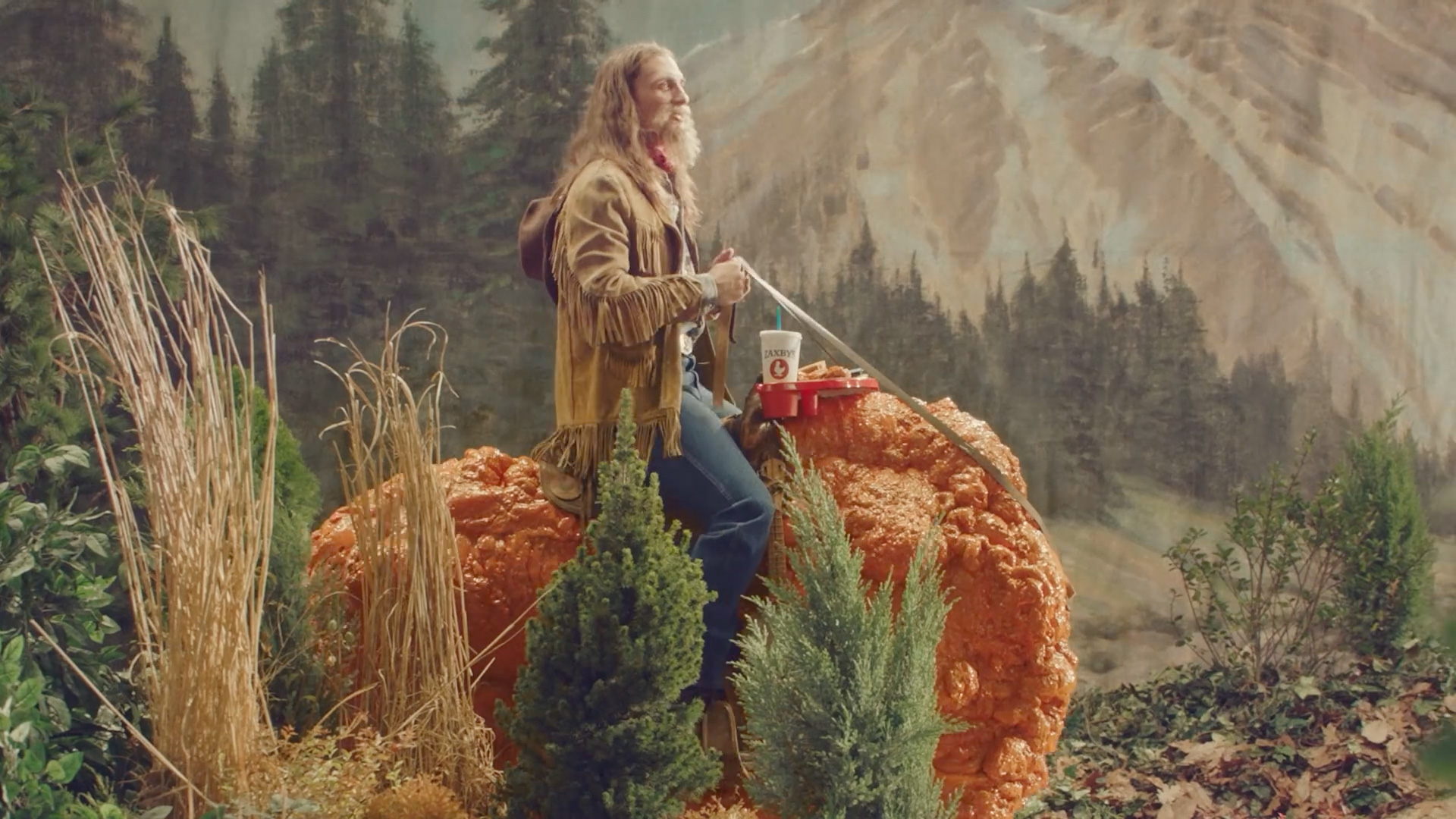 To hype its new Garlic Blaze sauce, fast-casual restaurant chain Zaxby's pays tuneful tribute to Jomo and the Possum Posse's much-loved "Guy on a Buffalo" videos from a decade ago.

But instead of an actual buffalo, this cowboy rides a ginormous boneless chicken wing through a kooky cut-rate forest populated by sassy bobcats, squirrels and hedgehogs—plus one sly but lovable fox determined to steal a meal.

Guy on a Buffalo Wing

Yee-haw! It was all a dubious flashback related by original Buffalo bro Rick Guinn, who makes a cameo in the final frames. And here he is in a classic clip from 2011:

Jomo and his posse wrote and perform the new track (get out of our head, "Buffalo Wiiiiiing"!) and Kiran Koshy directs with grand tacky style. The work launched on ESPN during Monday's NCAA championship football game and edits will also air regionally during Super Bowl 56. There's a website, too.

Below, Muse saddles up with agency president Dooley Tombras to explore the campaign:

Muse: Why spoof "Guy on a Buffalo" in the first place?

Dooley Tombras: After the last couple of years of bad-weird, we all need a little more good-weird in our lives. There were a lot of people on the team who loved the original videos, no one more than the Zaxby's CMO Joel Bulger. So, it was one of those ideas that the team had tossed around for a while, but we just needed the right moment. And this was that right moment.

Who rides the wing?

Kyle Glenn. As soon as we saw his submission—the charm, the facial expressions, the hair and partially unbuttoned western shirt, we knew we had our guy. He could not have been a better choice. Lit up the room, and he and the wing became fast friends.

Tell us more about that most impressive poultry prop.

The wing is made up of all the dreams of boneless wings—to one day graze in the mystical foothills of the Zaxby's ranch—where the animals frolic and squirrel away combo meals.

But seriously, it's made out of foam, plaster, paint ... and magic. The prop most recently was doing a residency at Schrom Studios in upstate New York, but made a trail drive down to Atlanta for an appearance at a watch party for the college national championship.

We didn't want any of it to feel too real. Everything had to complement the hazy recollections of a tough-as-nails frontiersman. They had to be as kitsch as a man who was dead serious while riding atop his deep-fried boneless steed.

True story: We had just wrapped shooting and had all piled in the company van to return to the hotel. As we were pulling out of the lot of the studio, a fox ran in front of the van. It was an omen!

The influencers talking about it are racking up hundreds of thousands of views, and thankfully, the Twitter conversations overwhelmingly have a taste for our brand of sauce. We seem to be adding thousands more views on YouTube every time we refresh the page, which is every 10 minutes. We hit 3 million impressions in under 24 hours.

@Zaxbys currently in the running for commercial of the year!!

Rare: internet creators actually make a buck for their efforts.

LEGENDARY: big money crafts an ad campaign to honor the internet thing... AND LOOPS IN THE GUY WHO INSPIRED THE INTERNET THING:
https://t.co/zlLKJMnFVi

One day the Guy on a Buffalo Wing was riding around in a forest.
He smelled a smell.
He's thinking, "where's that smell coming from? Feels like maybe over there."
So, he moseyed on over, pulled back on the reins.
That's how you stop a buffalo wing.
And he hopped on off, and he looked in the bush,
And he saw the warm, golden glow of a Buffalo Garlic Blaze meal…from Zaxby's.
Ooh, I'm going to take this with me to go. It looks great.
Wouldn't it be good with some ranch?
Caw! Thanks, eagle!

One day the Guy on a Buffalo Wing saw a fox in the weeds.
He's thinking, "that fox seems shady!"
"Naw, he's probably harmless enough. I'll just let him go. See ya, little fella!"
And then he found a hedgehog jammed down in a log and pulled him out and they became best friends.
They went back to the Buffalo Wing to snack down on Zaxby's, but the food was gone.
That stinking fox stole our meal.
"Oh, but you know what, I got an idea," says the hedgehog.
"I got something stashed in an old stump"
Ooh, it's a Buffalo Garlic Blaze meal, that's what I was just eating.
Ooh, it's tantalizing, let's sit down and eat it.
Mmm, that's pretty good.

Hey, uh, guy? I don't remember it happening like that!
I don't either.
Every time he eats Zaxby's, that's all he wants to talk about.
Yeah, I saw the original, and it was definitely a Buffalo you were riding and not a Buffalo Wing.