Plus, her efforts in online music education 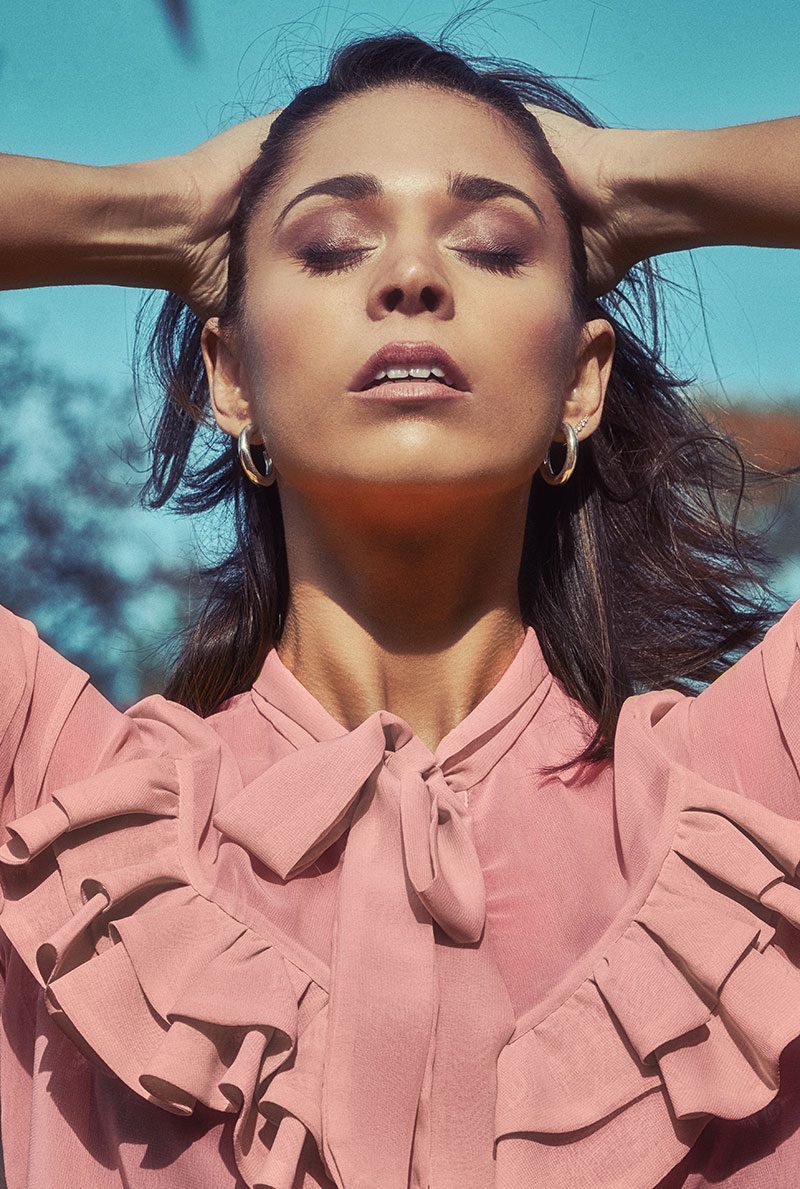 Ali Tamposi, one of the most talented pop songwriters working today, was on quite a roll before the Covid-19 pandemic struck. Having co-written Camila Cabello's international hits "Havana" and "Señorita" (the latter being Cabello's hit with Shawn Mendes), Tamposi and frequent collaborator Andrew Watt were named BMI's Songwriters of the Year for 2019. It was a remarkable way to wrap up the 2010s for Ali, who had begun the decade enjoying her first major hit—using the pain of a breakup to co-write the three-time Grammy-nominated "Stronger" by Kelly Clarkson.

Among her other co-writes are the multi-format No. 1 "Let Me Love You (feat. Justin Bieber)" by DJ Snake, "It Ain't Me (feat. Selena Gomez)" by Kygo, "Lonely Together (feat. Rita Ora)" by Avicii, and Dua Lipa's newest single, "Break My Heart."

Tamposi is a writer who very much feeds off the energy of in-person collaboration. In that sense, the days of Covid—and songwriting via Zoom—have been challenging for her. Still, she's been able to work with some close friends, and she's also been doing lots of planning for her new foundation, Creative Waves, supporting children in the arts, including a music-education program she hopes to launch early in 2021.

We spoke with Ali about her experiences writing music during Covid, and what we can expect from her foundation's e-curriculum.

Muse: How has your process of songwriting changed during Covid?

Ali Tamposi: At the very start of the pandemic, creatives immediately adapted to whatever form of technology they could to continue to collaborate. Most people in L.A. have makeshift recording studios in their homes, and prior to Zoom being so popular, everyone was doing FaceTime, Twitter, group chat, video chat. Most people had a seamless time with this transition. For me, it was a bit more rusty. I happened to be moving during the pandemic. Everything was in multiple places, and I also learned how much I rely on the energy in the studio and how important hearing the music out of the speakers is for me—how much of my creativity is intuitive. It took me a while, and I still am really struggling with this.

I feel like you're more on the spot now than you were before. Before, you could move around a bit and take breaks when necessary. So I've been avoiding Zoom sessions, especially with people I haven't worked with before. Usually I take a day to just really get to know someone, listen to their music, find out their inspirations, and I take time to really craft the story conceptually. I have a pretty consistent crew of people that I work with out here. I'm comfortable with those people, and I needed to make sure they were OK if there were things we needed to finish. But as far as material I'm really proud of—I don't know that I've created anything worthwhile off Zoom. I feel like I'm operating at 30 percent.

Have you tried any socially distanced in-person collaborations?

I have. We've been doing some backyard sessions, which has actually been really cool. Over the last seven years I've worked a lot with Andrew Watt, who's a music producer and an exceptional guitar player. We like to start things on acoustic guitar, and so, sitting out back, there's something really organic about it that I've been enjoying. I've gone through a few different waves of creativity. There are moments when I feel inspired and really motivated to work, and then other moments where I want to go surfing or paint a dresser or something. It's been more challenging to harness the creativity.

What's your process for songwriting? Is it collaborative the whole way through? Do you set time aside to work on melodies and other things that might be easier to do on your own?

The biggest lesson I've learned over the last five years has been that, for me, the best work comes out of collaboration. I always make sure I have at least an hour in my car prior to going into the studio, either to listen to things that inspire me or to meditate and formulate some ideas. I used to journal a lot more. I used to take note of different things people would say in conversation that I thought would be good for a song concept. It's a bit more open now, where I can feel out the tone of the music, and that generates things to talk about—a less emotional well, but of different things to pull from.

I do find there really isn't a recipe for good work. There are times when I have been working for two months, pretty much every single day, and you would think I would be burned out. But some of my best work has come at the end of those two months. And then there are times when the downtime is really helpful. I've never really found the best strategy for myself. The only thing I'm sure of is that if there are other talented people in the room, the chances are higher that the product will be better.

The lack of in-person performing has been brutal for artists lately. What's your perspective on that?

The last artist I was working with, a major artist, based on her experience it's really been difficult to regroup. When you have your schedule set out two years in advance, the downtimes are few and far between. So it's given everyone a chance to really hone their songwriting skills. Prior to the pandemic, your time is divided up in so many areas. You have to make sure you're on top of your social media, and you're touring, and you're doing appearances and videos. Now, you can put that time into your music.

I can really feel that attention. They're sharpening their skills. They have more to talk about. I would say the frustration is still there—and sometimes there's too much time to self-reflect. All the unknowns have been unsettling, and it makes it really hard to find that serenity. But the people who are utilizing this time to be productive, those people are really going to excel. And creatives have an advantage because they can take chaos and make something out of it.

Everyone's been talking about how there'll be a big surge of incredible art when this is over.

Yeah. You could hear in that Taylor Swift's work. No one really knew what she was up to. And then all of the sudden, she comes up with this beautiful Folklore album. There's the proof. And it has an effect on me. It pushes me. When I hear great work, I'm like, "Whoa." It's inspiring. You want to really push yourself to be at that level and utilize the time you have to make the best work.

I'm curious how you feel about livestreaming. Do you watch livestreams? Do you have friends who are doing them?

I don't watch many of them. I gravitate more towards nature, so I spend a lot of time outside. I do think community is exceptionally important, and any way to connect during this time is really valuable. I can tell that people are more vulnerable on livestreams, and that's been really effective. Also, there's a lot of tools you're able to use as far as learning. I started a foundation called Creative Waves. They're currently building a school in Belle Glade where we underwrote their music program. That's been a slow climb because everyone's just starting to get acclimated to being in person.

But simultaneously, a friend of mine, Tamar [Kaprelian]—she's the founder of Nvak, a music organization—she came to me with this idea of a music e-curriculum, inspired by MasterClass. During the pandemic, too many kids have had too much downtime and not enough creative outlets. And some of these music universities are just really unaffordable for most of the world. There's a style of teaching that my peers and I could really put together to enhance the way music is being taught in schools. Songwriting 101. Music production 101. And also, what to do after you have a song written. How do you upload it? What is BMI? What is ASCAP? We're in the process of developing that. If the content is educational, informative and inspiring, I'm all for it as far as livestreams go.

Will you do Zoom lessons? How will that work?

The program is called Song Start, and it's a branch off Creative Waves. We are currently hiring Berkeley graduates and other music school graduates to help us develop a group to teach the curriculum. We're not exactly sure where the content is going to live, whether it's YouTube, maybe it's Spotify, we haven't gotten that far yet. But we are hoping to have a pilot shot mid-October. We're hoping by January we have enough together to launch it. I'm grateful for this time to develop things outside of the studio.

You've had an incredible career so far. What was it like being named BMI Pop Songwriter of the Year last year?

It was awesome. I love BMI. They're like family to me at this point, and I was honored to be recognized. Twelve years ago, I remember not having a ticket to the award show but sneaking in and just admiring all the exceptional talent in that room and what it represents. Flash forward—to win that award with Andrew was a great feeling.

You worked with Camila Cabello on "Havana" and "Señorita." Do you feel those were milestones in terms of your artistry?

I do. Prior to writing "Havana," I was starting records as folk songs, and they were quickly turned into EDM pop records—working with DJ Snake, Marshmello. Working with Camila was a pivot and an introduction to a new sonic realm I hadn't explored. So it was really fun, and it was proof I'm not just one type of writer. I adore Camila. I've known her for years, and it's great to share that with people you really like.

Which songwriters influenced you early in your career, and more recently, too?

Carole King. Joni [Mitchell]. Alanis Morissette. Jagged Little Pill had a really big effect on me. Jewel. I loved her. Just riding to school in the backseat of my mom's car—the more visual the lyric, the more fun it was to fantasize about being in your own music video to those lyrics. Gwen Stefani, [No Doubt's] Tragic Kingdom—I loved that. That was in my middle-school era. I find myself going back to those albums and my perspective has changed and I connect in a different way to their styles. Today, I'm inspired by so many. I feel very proud to be a woman in this industry. Every award show, every music event, every Zoom, it just feels like home and we're all constantly challenging each other.

Any advice for young songwriters today?

It's hard work. You can't really escape that. But just keeping it consistent and always showing up no matter what. If you wake up in the morning and you feel uninspired, you never know—we have Zoom sessions, so you never know what opening your computer will do, and the people you meet. It's about staying on your own journey and trying to recognize when you feel yourself comparing yourself to others. Just being there and being open and collaborating is really important.