Warren Bobrow, Cannabis Writer and Cocktail Whisperer, on the Rise of Canna Beverages 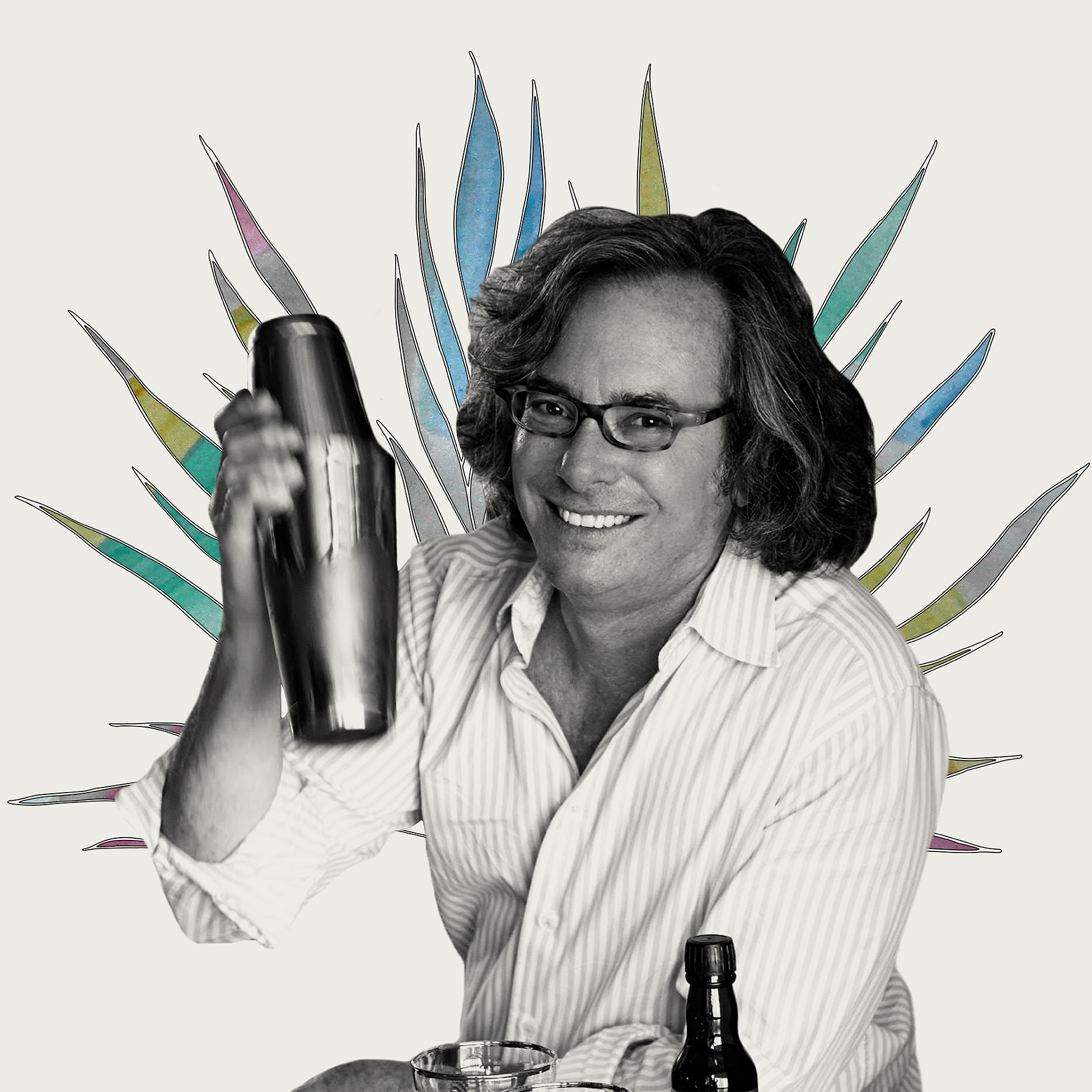 Warren Bobrow, known as the Cocktail Whisperer, is an Emerson grad who became a TV engineer in New York City, worked at Danceteria—a famous NYC nightclub—in their video lounge, a dishwasher in York Harbor, Maine, and a certified chef/saucier. After the loss of his fresh pasta business in Hurricane Hugo, he worked in banking for 20 years before reinventing himself—becoming a six-time author, bar back to bartender and master mixologist. He is also a former rum judge for both the Ministry of Rum and the Rum XP.

Warren now works in the cannabis industry full-time as a journalist for Skunk Magazine, Different Leaf Magazine and Cannabis Cactus Magazine. He is the co-founder and master mixologist for Klaus, a Terpene-Forward/THC infused craft cocktail for the California regulated market. No liquor! Warren has enjoyed the bemusing qualities of cannabis since 1972.

We spoke with Warren for our Higher Calling series, where we chat with leaders in the cannabis space.

I grew up on my family's biodynamic/organic horse farm in Morris Township, New Jersey. After college and working as a cook around the country, owning and losing my first business during Hurricane Hugo and an ill-fated trip to Arizona to cook at the Scottsdale Princess Hotel, I found myself back in Morristown in 1992. I embarked on an inappropriate but necessary career in banking. Fortunately, I lost that job after almost two decades of pain. I didn't belong there even for one day! Morristown is where I live today.

I wear many hats in the cannabis industry. I'm a deep-dive canna-journalist for Skunk Magazine, Cannabis Cactus Magazine and Different Leaf Magazine, drawing deeply from my own experiences of smoking cannabis for the first time at age 12 at a Grateful Dead concert in New Jersey in 1972. I co-founded my second company, Klaus, named for my 1800s German drinking gnome that I've traveled much of the world with during my former career working in on/off premise liquor. Klaus is a good little guy, liked by most and he loves cannabis drinks, certainly more than getting drunk. No hangovers now!

Favorite flowers are always sun-grown, biodynamic/organic and dry farmed. This is not always available to me on the East Coast with our shorter growing season, but the outdoor grown cannabis that I've enjoyed from Oregon, Maine, Northern California and Massachusetts certainly has opened my mind to the concept of terroir. Why should viticulturists have all the fun? Genetics and strains, most exciting!

My favorite indoor grown flowers are probably from Green Bodhi in Oregon. Consistently charming and intellectual, these mindfully grown herbs have opened my mind and allowed me to write what flows. Of course I'd be remiss not to mention Wonderbrett, Swami Select, the former Brotherly Love (dammit, I loved their flower), Sunrise Mountain Farms, Aster Farms and Hopper.

I'm really a hash head, but good luck finding Middle Eastern style temple ball hash in the U.S. The market is expanding in this regard. Unfortunately, the untimely death of Frenchy Cannoli has left a void in this regard, but the quality hash from Sitka has filled the need that I have for craft hash over science lab hash. Writing about cannabis for my pleasure has opened many doors in the genre of cannabis. It's really exciting!

There are many challenges in marketing for any vice level product. We have the stigmas. I have myself to thank for knowing this one, inside and out. Growing up in New Jersey, surrounded by ultra affluence and heavy drinking, I took a job at a local wine store in my teens, which opened my eyes to the concept of appellation. Of course my upbringing, traveling all over Europe, the Ivory Coast, and Brazil for my cultural education made me into the well-rounded person I am today. Cannabis, although important to me, was still a forbidden topic and still is today, no matter what the law says in New Jersey. Several of my peers in prep school were expelled for smoking weed. Ruined their young lives, no matter how wealthy and influential their parents were at the time in the '70s.

Stigmas exist through the grassroots support of liquor companies that are none too happy about the proliferation of "legal" cannabis, taking away their right (since prohibition) to print money and deeply profit from selling watered-down spirits to the masses. Your favorite vodka? 80 proof, 40 percent alcohol. The remainder? Water. Expensive water.

Several years ago, I attended a seminar at the Wine & Spirits Wholesalers of America Convention called "What About Cannabis?" It was standing room only. I had just written my fourth book, Cannabis Cocktails, Mocktails and Tonics. I was working for a Russian liquor company, Marussia Beverages. Mention cannabis to the Russians—or to any professional drinker—and there is a certain curiosity that melts into outright disgust. In 2018, I quit the liquor business completely and haven't suffered an occupational hazard.

Cannabis-fueled beverages. It stands to reason that I would choose a career based on my passion for the plant and my deep understanding of cannabis as more than just a metaphor. That authenticity is what drives me. When you do what you love and obviously are passionate about it, you're driven. As a trained restaurant and bar professional, I'm in a unique position to do what I love. After all, I'm certainly only one of the few individuals in the world who started as a bar back on my climb towards authenticity.

Having written six books didn't hurt either. Nor did a rum-fueled experience that took me around the globe seeking authentic craft spirits. Why would I want to do anything else? I have a natural affinity for that tangle of flavors that pour down your gullet and make you happy. That's called hospitality and it's something that I do well in life.

Last Prisoner Project. No one should be in prison for cannabis. Period.

It's an ongoing project. The conception in 2015 that I would write my fourth book—Cannabis Cocktails—then develop the scientific technology to allow for the commercialization of a craft cannabis beverage. Not just another sparkling water with fruit flavors added, but a craft mocktail that is based on real ingredients. My drink has only three ingredients plus the Terpene-Forward THC emulsion. What makes my drink better than my competition is the simple fact that Klaus tastes like and smells like the strain from which it emanates.

Please name a cannabis beverage on the market today that tastes like cannabis. That's why Klaus is unlike anything that has ever been manufactured prior. This is gastro-molecular canna-mixology that's light years ahead of the cannabis beverage industry.

I love what Luke Anderson has done with the microdosed beverage, CANN. I admire him as a fellow craftsman in beverages, for his education in Boston (me too!) and as a deeply placed visionary in his field. What he has accomplished in a short time is pretty fantastic, especially in a deeply regulated market.

I admire the work being done with Intentional Horticulture from my friend and spiritual mentor, John Bayes from Green Bodhi in Oregon. His work in mindful and the deeply spiritual propagation of cannabis has influenced my work at the core level. Smoke some of his cannabis and your mind will be opened. Some of the best writing I've done in years was influenced by his carefully tended cultivars.

That's a good question. I've failed at least eight times in my life—careers, marriage, bankruptcy, being disowned and ostracized by my own family. They have no idea of my successes or what brought me here to be able to work with the plant. It's taken me some real time to get here. Much anguish, difficulty and disappointment before finding myself able to follow my dreams and passion. I will say there is no other job or life that I would rather want. It's taken me 60 years to get here to occupy a small role within the cannabis business. I get to be me. In cannabis! What a dream come true story!