One Copywriter's Quest to Reduce the Stigma Around Psychiatric Meds

A few months back, when tasked with creating a project at the Miami Ad School of New York, Lauren Weiss decided to tackle the stigma around mental illness and prescription drugs.

Weiss had long struggled through mania and depression stemming from bipolar disorder, but she resisted taking medication until 2017.

"Throughout high school and college and my first few jobs, I was handling my illness unmedicated," Weiss tells Muse. "I lost friends, I struggled at work and in relationships, while thinking I could keep handling it on my own. I was extremely worried that medications would hamper my creativity. It's really had the opposite effect, because now I can actually focus on my work." 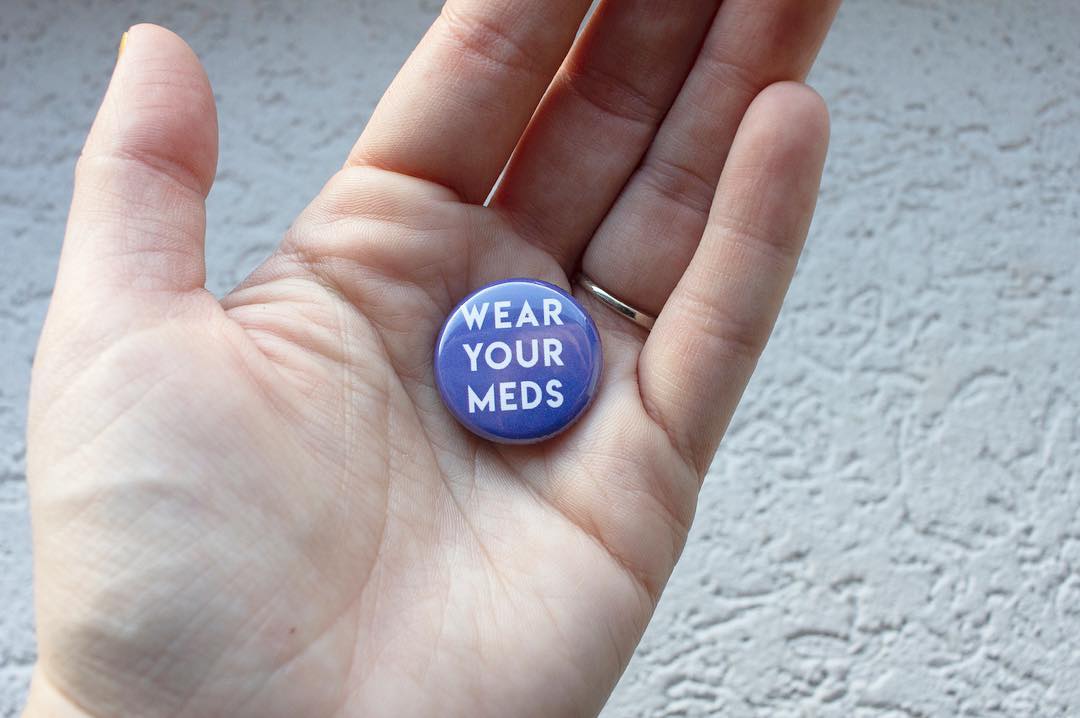 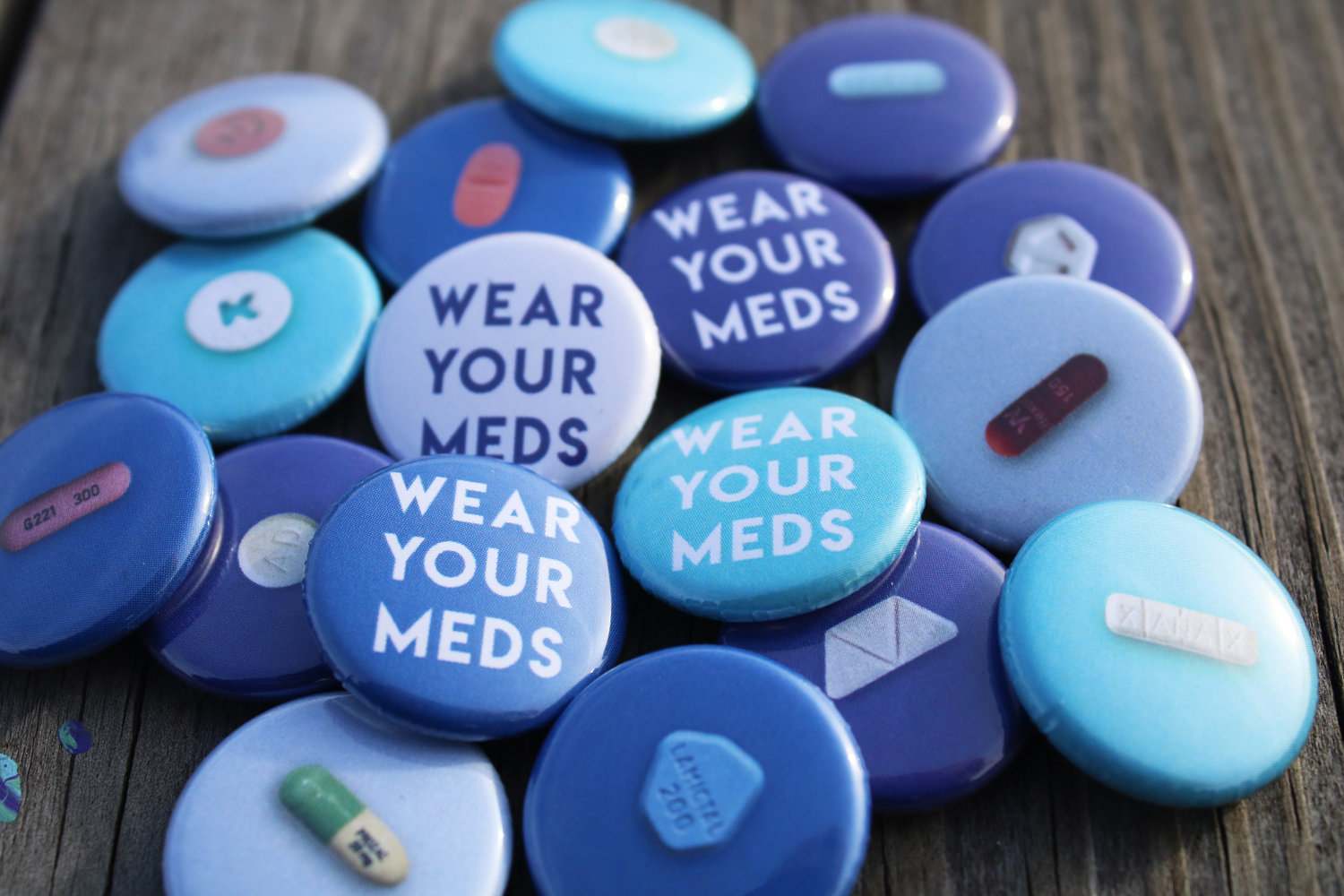 "Mental illnesses are most commonly diagnosed in your late teens and 20s, and buttons happen to be very popular among that demographic, so it was a natural fit," she says. "Buttons also felt like a simple way to get a lot of visibility without spending a ton of money. I've got student loans to pay off, and this was really just a class assignment initially, so the budget wasn't exactly high enough to go for media buys or interactive digital platforms. It's just me running the initiative, with a borrowed button maker, Squarespace and the magic of social media."

Wearers can display the metal and mylar buttons representing their own prescriptions, "and the hope is that people around them will notice and ask why they have a button with a pill on it," Weiss says. "Buttons are already a vehicle of conversation for a lot of people, to share their interests or political views. Wearing one of the buttons means you're ready to share your experience with medication if someone asks about it."

Since March, Weiss has made about 600 buttons and sold 500 at $3 each, with proceeds supporting the National Alliance on Mental Illness. "When you remove all the operating costs, like packaging and the website, I've managed to donate about $1,200 to NAMI through 'Wear Your Meds,'" she says.

Now a copywriter at Barker in New York working on Lumify, Sunsweet and Xifaxan—and a 2019 student Silver Clio winner for a project on human trafficking—Weiss' button-making continues apace. 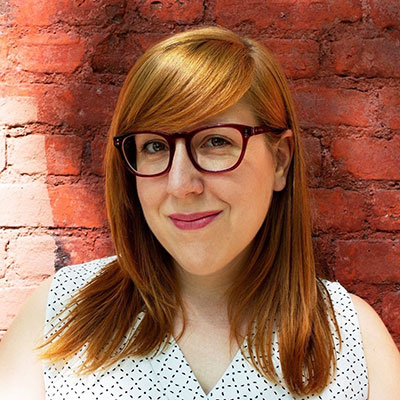 In our conversation below, edited for length and clarity, she discusses "Wear Your Meds" in detail, and analyzes which approaches work best in mental-health marketing and outreach:

Why do you want people to wear their meds?

I chose to specifically tackle medication, and not mental health broadly, because while conversations around mental health are getting easier, I still feel that taking meds is looked down on. There's a lot of buzz out there around solving things "naturally," doing yoga, throwing on a face mask—and while self care is great, for some people medication is vital. We don't look down on people for taking medication for their diabetes, but when it comes to our brain it suddenly becomes taboo. That needs to change.

Do you wear one of your own buttons?

I keep my Lamictal and "Wear Your Meds" logo buttons on my purse and on my backpack, so I usually have one on me when I'm out. I actually saw someone on the subway with a button [of mine] once, which was pretty surreal. I've had some good conversations with family and friends through wearing my buttons—I'm generally pretty open about my bipolar, but prior to this project I hadn't talked a lot about meds. In talking about it and posting online, I've discovered that a lot of people around me are on, or have been on, medication, and I had no idea.

Has wearing one of your buttons ever changed anyone's life?

One of my favorite stories is regarding a friend of mine who learned that she didn't have to go off her meds while pregnant. It turns out women can continue to take certain medications for mental illness while pregnant, but so many people think otherwise. So, she'd gone off them. A few months before she was due, her doctor told her she could have stayed on them the whole time, and said something to the effect of, "Would you rather your child be born to a mother who's healthy and happy, or a mother who's dealing with unmedicated depression?" She was worried about her family's reaction, given how little people understand about meds and pregnancy, but she wore the buttons and had conversations to try and fight that stigma. It was inspiring.

Have you ever gotten any negative reactions over the buttons?

The main concern I've heard is that people feel like I'm promoting some of the more abused meds, like Xanax, and the initiative will encourage people to abuse these medications. I've also had a few people say that wearing the buttons might make people a target for muggers that might want their meds. I don't feel that either of these things are true, but I understand the concerns. While addiction is a serious issue, so are the stigmas around mental health. This initiative was not created to necessarily promote the use of medication, but to open up a dialogue regarding a somewhat undiscussed and taboo topic.

I've had a few other concerns that have been huge thought starters. For one, medications can be impossible to afford for a lot of people in the U.S. I had to go off a medication because my insurance didn't cover enough of the cost. It's a huge issue for a lot of people in this country, so it's easy to say "try medication," but in reality, it is hard for many people. Another issue has been overall privilege. Some people aren't living or working in a space where they feel comfortable sharing information about their mental illness. They're afraid of losing their job, or getting shunned by family and friends. Being able to wear these buttons is a privilege in itself. The hope is that those of us who are able to exercise that privilege can help make things better for people who aren't in a position to do so.

What kinds of mental-health communications campaigns do you think are most effective?

The most effective communication I've seen around mental health comes from celebrities and influencers. When a person you idolize and respect comes out and says, "I have depression" or "I take medication for my mental illness," suddenly they're "just like us" and that's extremely powerful—especially for younger people, who engage so much with their idols on social media. Ariana Grande talks openly all the time on Instagram about her anxiety, depression and going to therapy. She has an audience of millions that hang on her every word, so she's normalizing that conversation among young people with just a few Insta Stories. That 17-year-old who loves and follows Ariana and is struggling with anxiety is suddenly thinking about going to therapy. Because if Ariana Grande does it, maybe it's OK.

The biggest mistake you can make when creating a mental-health campaign, or pharma ad, is to be unrealistic. I was once a part of a video where I was depicted as a depressed woman crying in the shadows and clutching her head. Sure, I cry, but this overdramatization was ridiculous. I also think of commercials for antidepressant medication where people are depicted as two-faced: one is a happy mask, and behind the mask is a sad face. I understand what they're getting at, but the depiction feels more comical than real. When it comes down to it, a human approach is always going to be the best. At its core, 'Wear Your Meds' is about people's stories and experiences. It's not a gimmick, it's real people sharing their real experiences.

I'd love to be a creative director down the line, doing a mix of this sort of meaningful work and some more silly, out-there work—I swear, I'm not all serious. Meds will always be a part of my life, as they are for anyone with a chronic condition. For some people, meds are just a temporary way to address a period of depression or anxiety during huge life changes, for example. As someone who is bipolar, I'll most likely be on meds for the rest of my life. And that's OK.