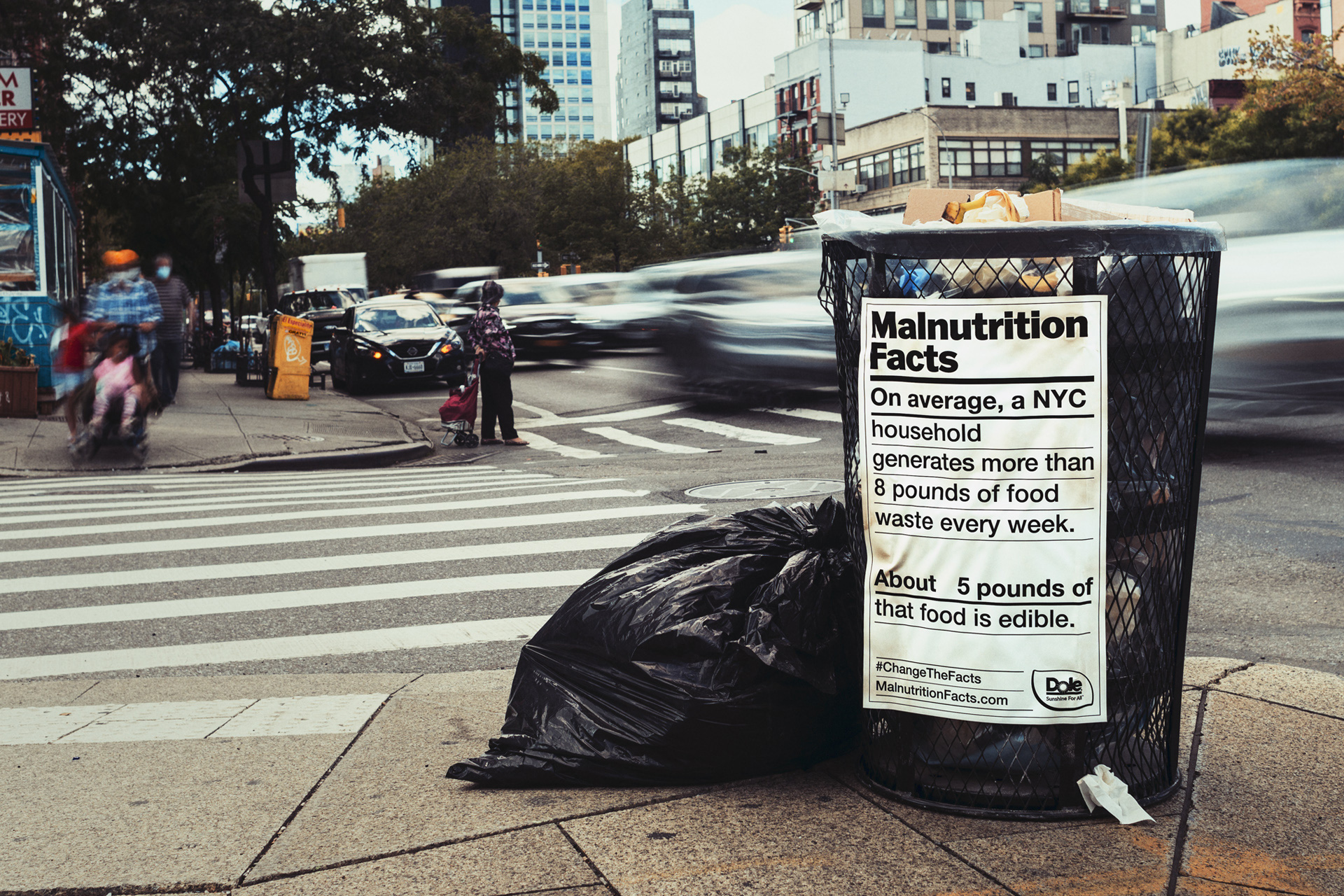 One person's trash can feed someone else in need ... and likely wasn't even trash in the first place.

An estimated 1.4 billion tons of food is wasted each year, with 40 million tons coming from the U.S., more than any other country in the world, per Dole Sunshine. The company launched The Dole Promise in 2020, part of which includes plans to provide access to nutrition for 1 billion people by 2025.

"On average, a NYC household generates more than eight pounds of food waste every week. About five pounds of that food is edible," reads one ad. Says another: "3.9 million tons of food in NY end up in the trash every year. Yet, 12.8% of New Yorkers struggle with food insecurity." 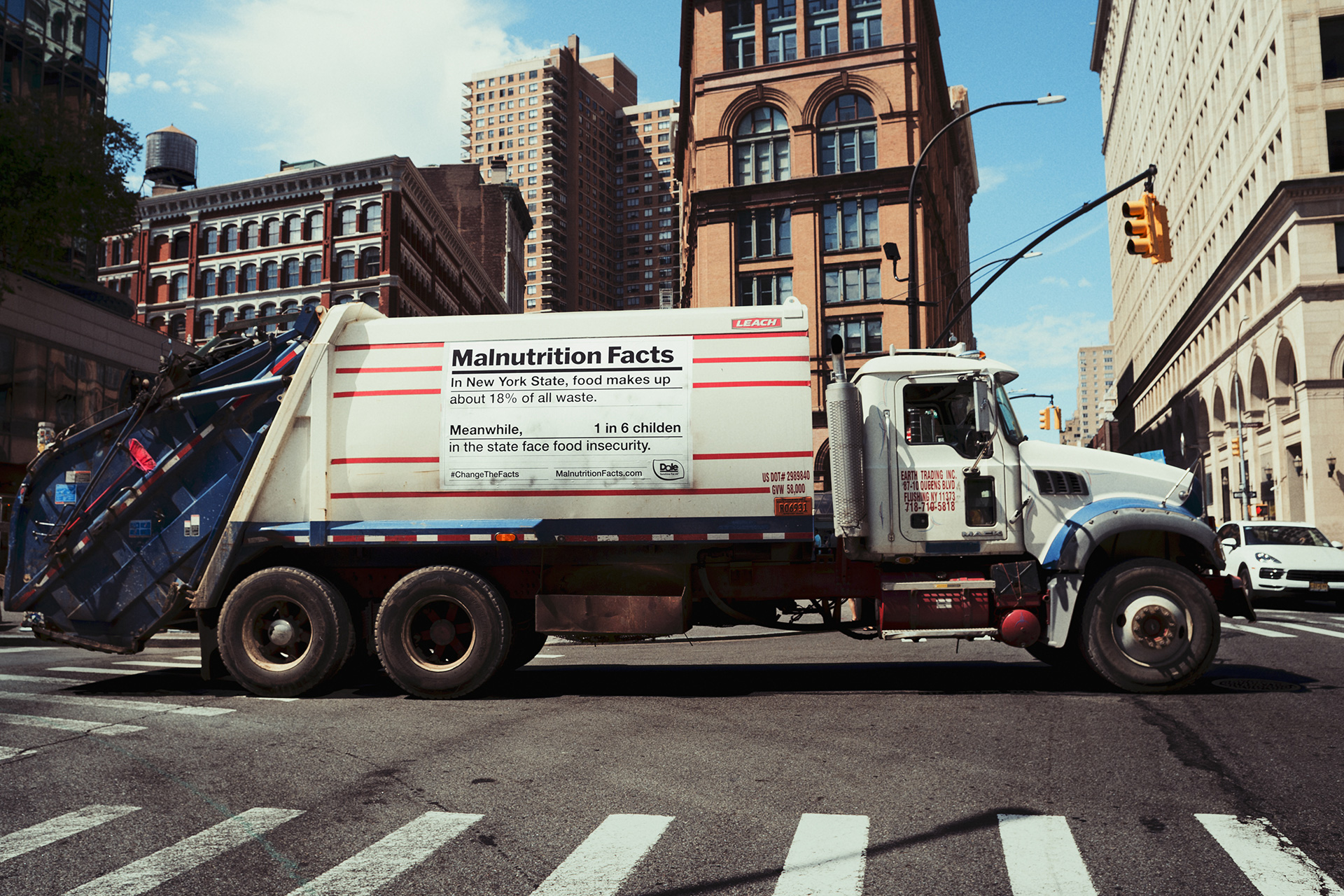 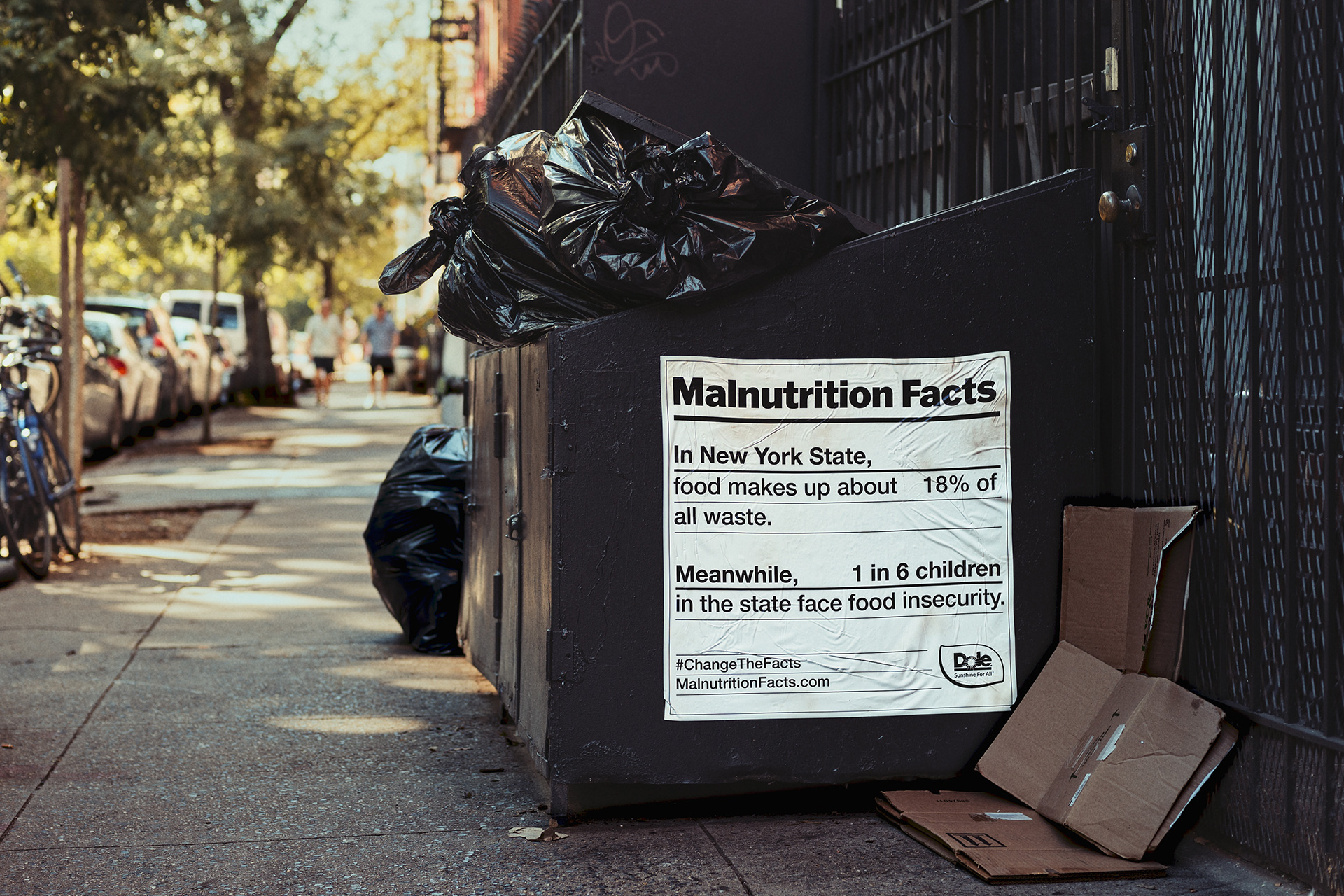 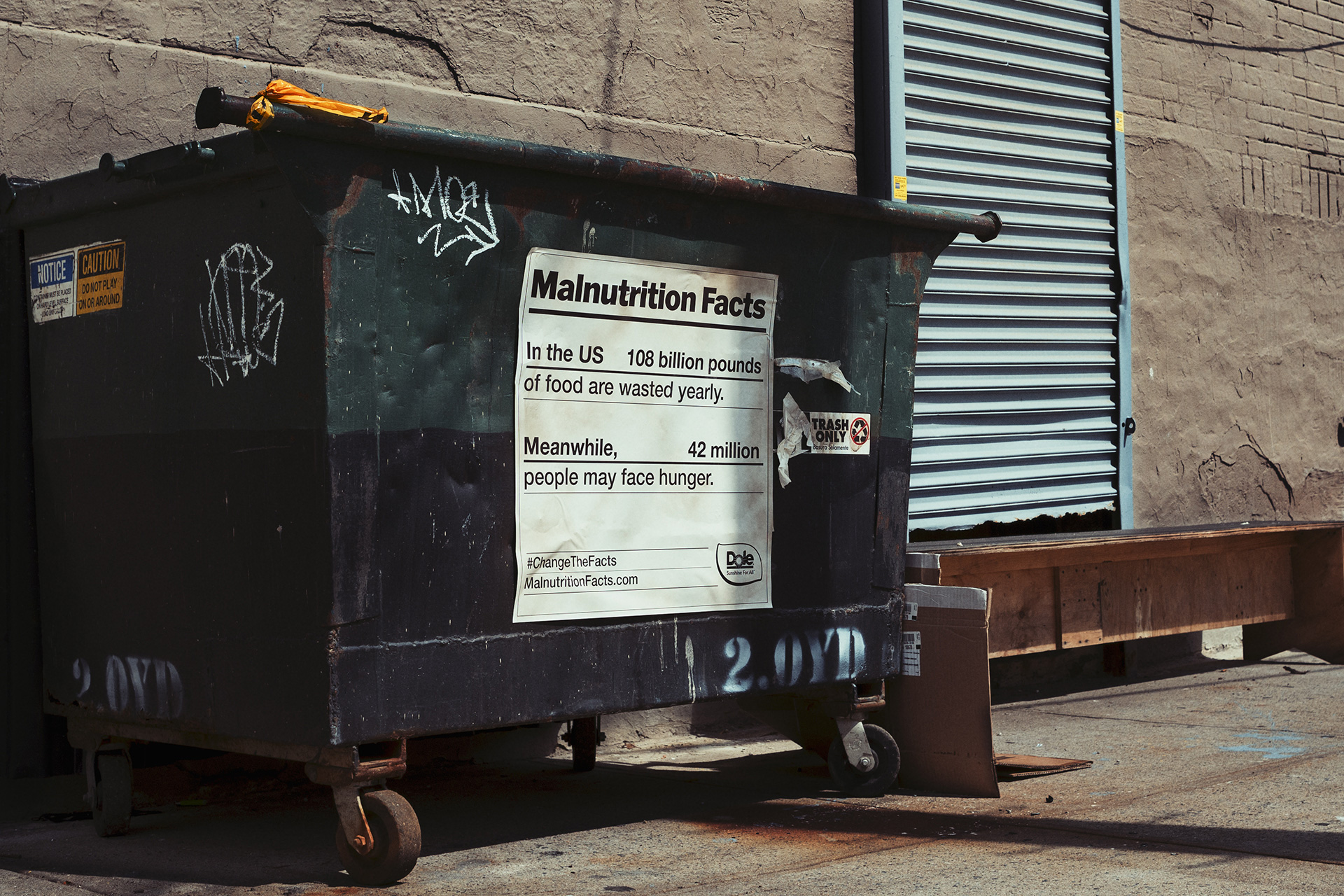 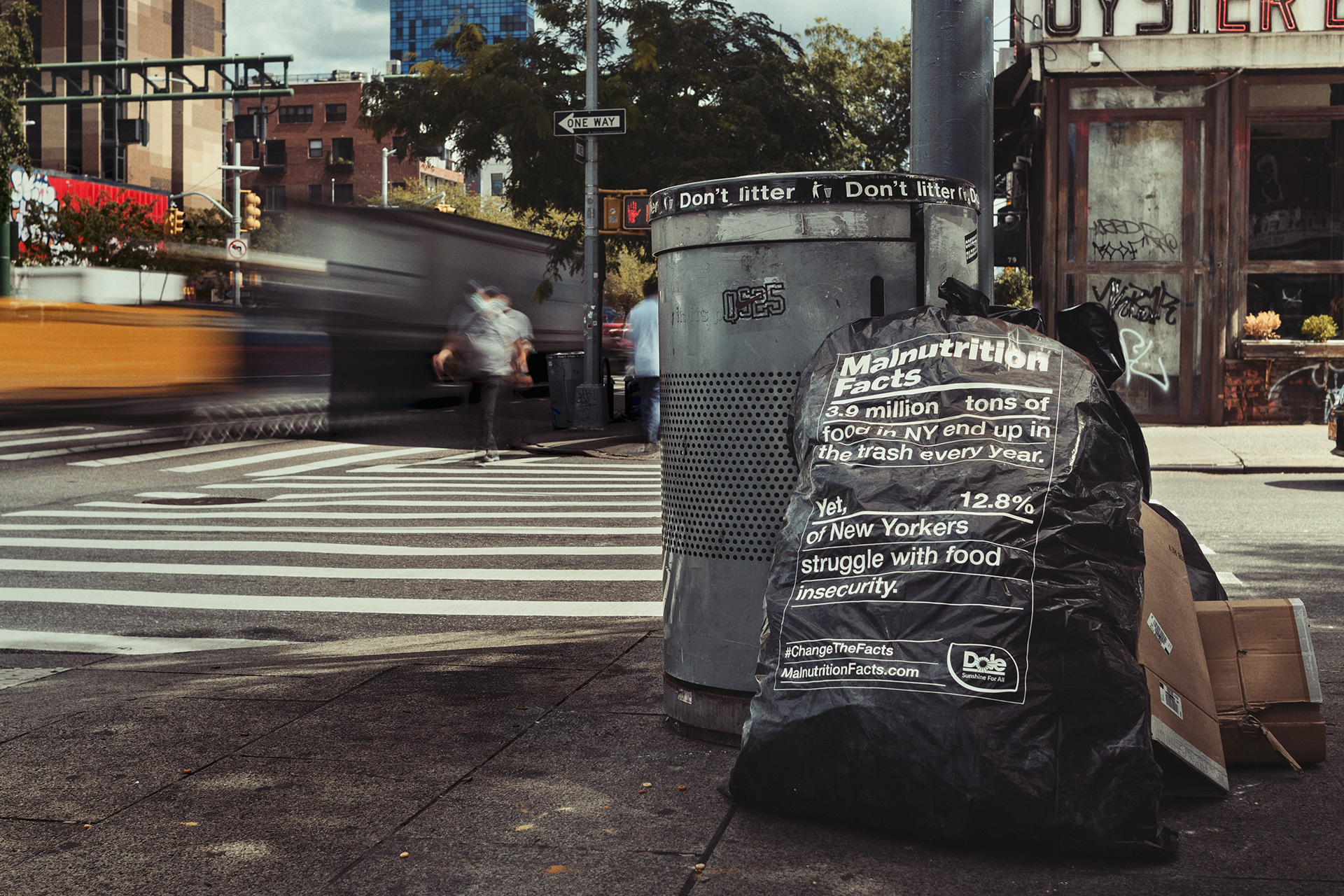 "There are significant education gaps when it comes to the impact of food waste on hunger, with one-third of Americans admitting they make no effort to reduce food waste at home," says Gian Lanfranco, co-founder and CEO of L&C NYC, the agency behind the initiative. "So we wanted to make these shocking facts visible, turning the icon of waste into the perfect media space to communicate this message. Making trash bags and trash containers that are normally ignored a place for people to stop, read, think and make little changes in their lives regarding food waste."

Each label includes the hashtag #ChangeTheFacts and the Malnutrition Facts website. Via product donation and funding, Dole and City Harvest will deliver more than 280,000 pounds of food to New Yorkers dealing with food insecurity.

A 90-second video accompanies the outdoor elements. It brings the malnutrition labels to life by juxtaposing facts about food insecurity and nutrition issues atop open bags of trash, along with the dumpsters, trash cans and garbage trucks seen in the OOH creative. Passersby share their shock upon reading the facts with a promise to do better.

"We believe that access to good nutrition should be like sunshine, available for everyone. A key component of this lack of access is the food we waste compared to the staggering number of people facing food insecurity," says Rupen Desai, global CMO of Dole Sunshine Co. "Placing the 'usually missed' nutrition label—where we find food waste, on trash bins—is our way to create awareness, action and impact around reducing this waste."

Dole's first iteration of Malnutrition Labels launched earlier this year with large video projections on buildings to highlight malnutrition in cities throughout the U.S. suffering from it.