So many knives, so little time 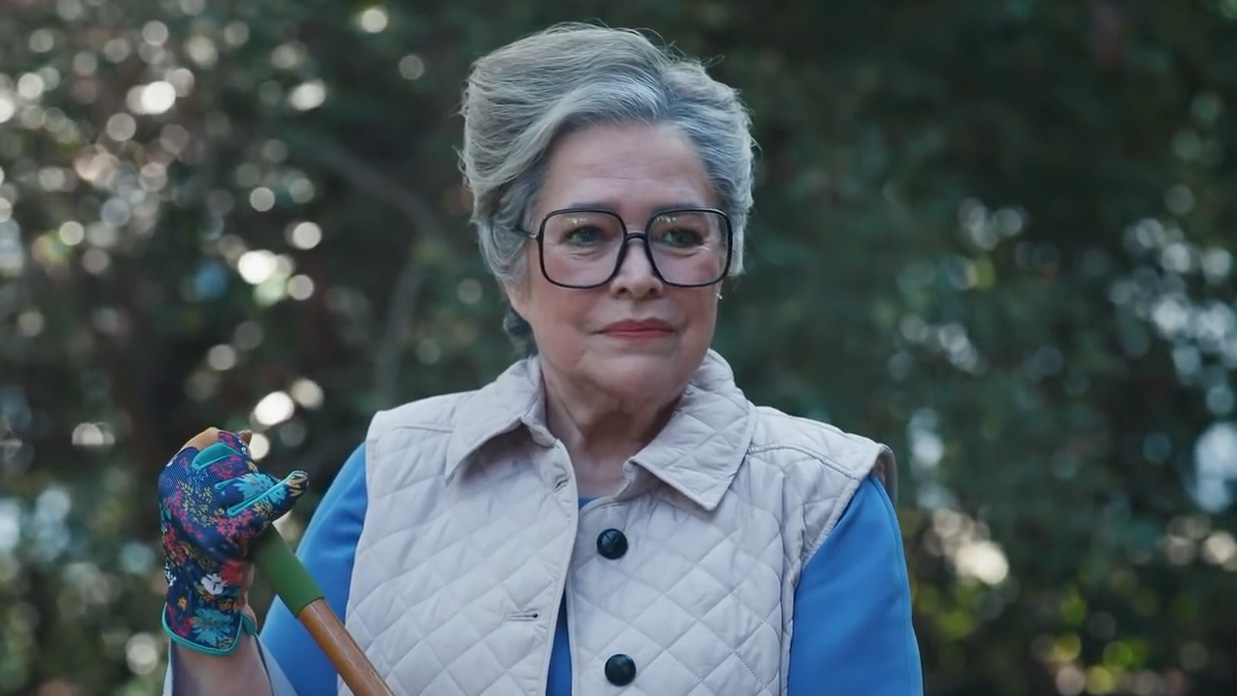 Kathy Bates has played an obsessed fan, the unsinkable Molly Brown, Gertrude Stein, a serial killer, Mama ... and now Grandma Ursula. While she may look like your typical grandma, Ursula has secrets. And many are buried.

Grandma Ursula has a checkered past, and her granddaughter Maddie, played by Grace Rex, is determined to get to the bottom of it. In a series of four ads, Bates avoids Maddie via secret panels and paths that open in amusing ways, along with a yarn grandma that stands in while Ursula hides her past.

One minute, Grandma is baking pie, but that stain on her apron ... is it cherry or something more sinister? In another ad, Maddie offers to help Grandma rake leaves. In the shed is a wall of knives, and even more are mixed with the leaves. "So many knives," says a frightened Maddie. "So little time," says Grandma.

The next spot, "Grandma Getaway," is a runaway hit. Maddie finds Grandma burning a letter, and the chase begins. Ursula pushes a button hidden in a sculpture to unlock a secret passage behind a bookcase. A Wet Willie to another bust opens a passage behind the fireplace. A knife to the head, a slap to the face, a raspberry to a cherub and some nipple play keep Grandma on the run. "What's Grandma hiding" asks the ad, as Ursula scurries on the roof.

With a nod to Psycho, "You're Not My Grandma" features a figure sitting in a dark room. Maddie assumes it's Grandma, but it's a yarn version, so the real Grandma can bury something in the backyard. By the time Maddie gets to the yard, yarn grandma is there, while actual Grandma peers from the rear window.

Merge Mansion | You're Not My Grandma

Ads are running on broadcast and cable TV, online and social media.

"The 'merge' gaming category is really crowded," W+K tells Muse. "The thing that separates Merge Mansion from the category is its mysterious storyline. We knew we wanted to treat Merge Mansion like an entertainment property. And we knew we wanted to build up the mystery. We didn't want to give fans answers. We wanted to create more questions. So we landed on the idea, 'What's Grandma hiding?' And it ended up being the perfect thread to tie all of these short, weird films together."

And Kathy Bates and yarn grandma? One was a challenge; the other not so much.

"An Academy Award-winning actress with a penchant for spooky roles seemed like a perfect fit, so Kathy was a no-brainer. Also, she's very nice," says the agency. "We did experience some challenges shipping the yarn grandma back to HQ, but don't worry. She's home safe now."