This Ex Ad Guy Made a Vengeance Game for Dystopian Capitalism

How're you doing against those unobservable forces?

Our income inequality measures are bonkers. They are, in fact, so bad that an economist is using the U.S. as a cautionary tale for Britain.

Something is wrong. But fixing everything that got us here would require a rework of our financial and incentives model, and—more importantly—a serious revisit of what we value from a social and structural perspective. (New Zealand's doing that work now. It's envy-inducing.)

Released by Failcore, founded by ex-copywriter Jan Cieslar (of "Life After Death" fame!), Invisible Fist is a dark reversal on the myth of capitalism's "invisible hand," a term coined by Adam Smith in The Wealth of Nations.

The "invisible hand" can be defined as "unobservable market force that helps the demand and supply of goods in a free market to reach equilibrium automatically." Sweet, right? It's a benign magic force for good, like the Holy Spirit.

So why does it feel like that hand has folded its fingers around a pair of brass knuckles?

Invisible Fist, released May 6 and available on Steam, is a darkly funny card-based role-playing game. In succession, you play three characters trying to make it in Late Capitalism against the ultimate villain—the aforementioned Fist. (It's just as unobservable as its hand variant, but no less capable of impact—specifically, mashing all your dreams into blood-and-brains porridge.)

"We have the highest inequality in the century, and it's only getting worse," says Cieslar, who says his team experienced capitalism's highs and lows. "Some of us were homeless. Some worked in corporations. And our investor is a self-made multimillionaire. For us, inequality is both fascinating and terrifying."

Characters include Jeff, a self-made tech multibillionaire (if he doesn't get the option to acquire a bunker in-game, that's a real missed opportunity); middle-class university student Rena; and Dian Hua, a warehouse worker.

Will they succeed in balancing work, relaxation and sleep?

Below, check out our Q&A with Cieslar about "Invisible Fist," Failcore and … the priesthood?

Jan Cieslar: Our main goal is to create relevant games. We started with an experimental indie project about rising inequalities in so-called Late Capitalism, but pivoted into more mainstream fantasies, hopefully keeping our "core" of challenging people with new ideas.

Invisible Fist started as a school project for a gamedev course I took after leaving an agency. We started the project as three people—me, Oliwia Ziębińska and Kamil Fejfer, but it soon became bigger. I founded Failcore with investment from one of the most successful Polish entrepreneurs, Jan Stasz, with a goal to create more compelling games.

As for Invisible Fist, there were a lot of people who influenced it. The list goes on and on—they are all in the game credits, so give it a look!

What made you leave advertising?

Let me start by saying I really enjoyed working as an advertising creative. It enabled me to come up with ideas that wouldn't be possible to make without corporate money and top-notch craftsmen and artists from all disciplines. Three years after leaving the ad business, I still get a kick from studying the best campaigns at award shows.

That said, doing great work is hard, and I became a little bit disheartened by the corporate structure, especially in Polish branches, which often have to report to global headquarters. With every person in the chain of command, the actual responsibility and decision powers get watered down.

That's why the work I am most proud of happened for Polish companies and NGOs, where we could directly pitch to the decision makers. We did fun work for Ikea and Samsung, too, but got extremely lucky. And though it was nice to win awards, a week later we were again in the same suboptimal processes.

Some of my friends emigrated to the States, and I am very happy for the world-class work they make there. For various reasons I never decided to do that, and opted to go into gaming, where I felt I would have fuller control over the creative process.

How long did Invisible Fist take to make? Why income inequality?

The game started slowly, with me programming a simple prototype. At the beginning it was a fighting game in 3-D about people fighting against the Invisible Hand of The Free Market. This idea quickly got picked by Polish mass-media, with our small team being invited for interviews to the biggest Polish newspapers, and virtually all Polish gaming media wrote about it.

Then it was a year and a half of hard work, trying to setting up a company, learning the craft and doing all possible mistakes one can do. The more healthy approach would probably be to work for a few years in a traditional gaming company and then start with a less ambitious project with smaller scope ... but yeah, fuck it.

Inequality is a topic that interests me greatly. Almost a decade ago, my friend Filip Konopczyński—who co-created a Polish NGO dedicated to researching the economy and is a go-to source for Polish media when it comes to economics—introduced me to the notion of democratic socialism, which I understand is getting a lot of traction in the USA, thanks to Alexandria Ocasio-Cortez and Bernie Sanders. Its main goal is to level the gap between the rich and poor and to strengthen the middle class.

It's a topic far too big for this interview, so just let me say why great inequalities are counterproductive to the development of our world, technologies and society: It is proven that they lower social trust and connections. The lowering of social status of massive groups of people results in increased violence and crime rate, and it greatly blocks people from moving into upper classes.

It has also a strong correlation with global economic crises. The great spike in inequality in 1928 preceded the Great Depression, and a similar one resulted in the Great Recession. Middle-class share in rising productivity is not only not rising proportionately, but even getting lower. To maintain their way of life, people had to go into debt, which created a financial bubble, resulting in inevitable bursts and quite possibly ending in said crises.

Compare that to the era in the U.S. economy called the Great Prosperity, between these two inequality spikes. The top bracket of progressive income tax was at the level of 90 percent—unimaginable in today's neo-liberal political climate. The middle class rose, the percentage of college education rose, and people were actually able to buy houses and pay for the education. Imagine that—crazy, right?

What informed your choices of the three characters?

We wanted to give players a wide spectrum of financial success and culture—from the billionaire tech bro, through a middle-class liberal arts student, to a modern version of a slave, who has to rely on food stamps even though she works 12 hours a day.

It's hard to see through our social bubbles, so it was a learning experience for us. We wanted to give players the ability to play three totally different characters and learn about their everyday choices. 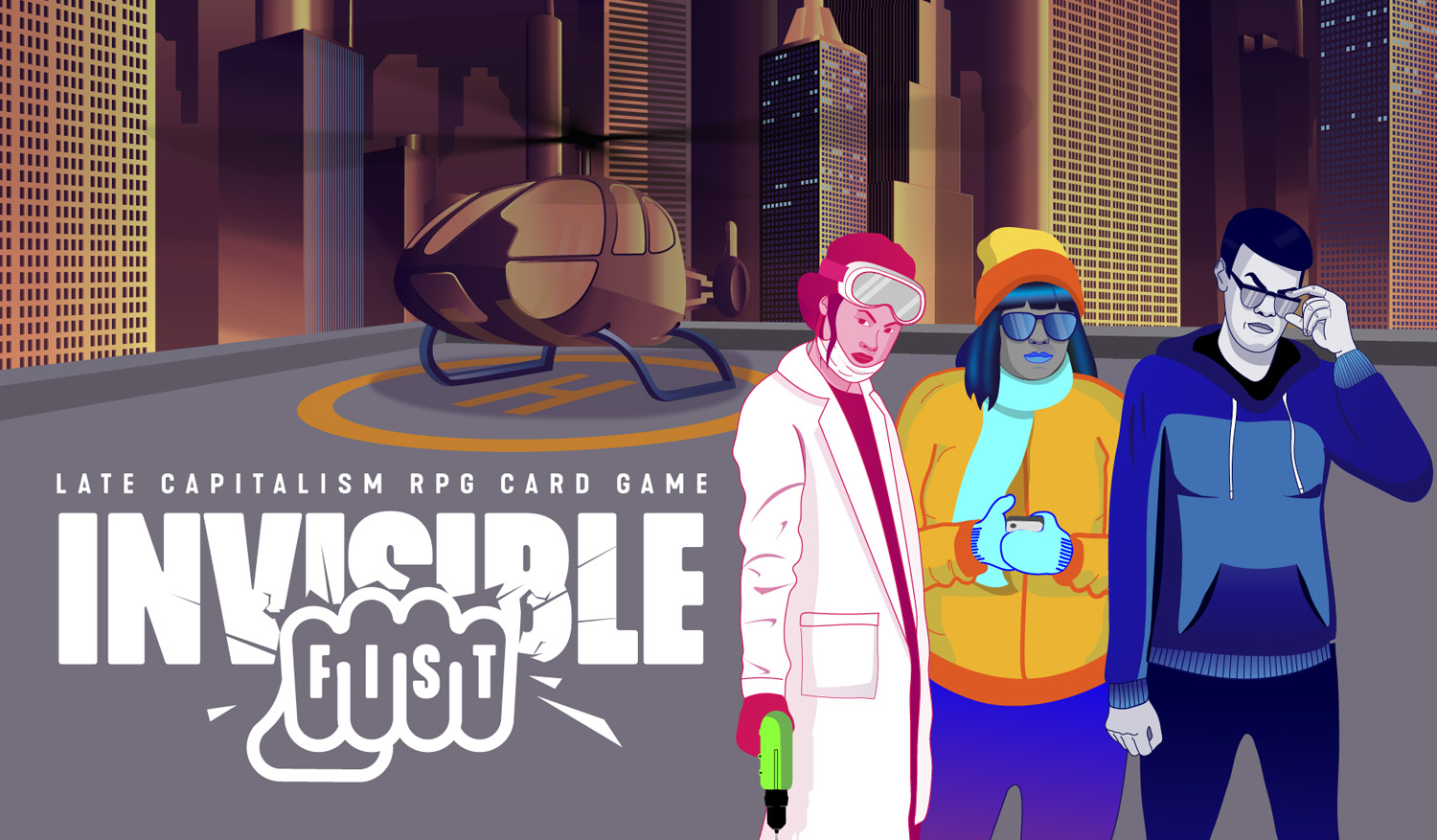 Each character wants to succeed and chase their dreams—the game starts on Easy Mode with the Billionaire, through Medium Mode with the middle-class student, and ends on Hard Mode with the warehouse worker. They all have dreams, but it is increasingly hard to reach them. One of the game mechanics is Stress, connected to the mental health of the characters. You can quite literally overwork yourself to death, by reaching the highest level of stress and getting stress-related disorders like depression, suicidal thoughts or anxiety.

Speaking of stress—so, players manage Work, Relax and Sleep cards, and a sarcastic TV personality comments on your every move. What informs these narrative choices? What are the stakes?

We did extensive research on all characters. We chose the U.S. as the setting, since it's both the world leader and an example of staggering inequalities. Most of the stories—world-leading startups, lifelong student debt and people unable to afford to visit a doctor—simply don't happen in Europe with our free education and healthcare, and also our more traditional attitude toward business.

Jeff the billionaire hopes to create a new killer product that will dominate the world, but if he fails and gets thrown out by the board, he is still left with his billions and can do as he pleases. Rena, our college student, would like to get rich, but if her dozens of part-time jobs and erotic premium Snapchat won't work, she will think about running away from the States to leave her debts. Dian Hua, a talented factory worker, dreams about winning American Idol and becoming a pop diva. If she fails, she tries to commit suicide by jumping out of the warehouse window, just to land into the [financial] safety net installed for such situations.

So as you can see, the stakes get more dramatic the more you play.

How do you win?

You have to work. A lot. And if you don't have a good enough job or education, then, well, you're fucked. It's still possible to win, but your Work cards deal less damage, your Relax cards are a bigger chunk of your budget, and you don't have time to sleep.

So even if you win, there's a big chance you will be an emotional and health wreckage.

Is it true that you're a former priest? Dude. If that's true, how'd you go from the cloth to advertising to gaming?! What's the thread?

I studied at a Baptist seminary and preached in a church every Sunday for a year. Then I turned atheist and couldn't get myself to follow that career path. Selling visible products and liberal ideas seemed like a natural extension of what I was doing.

I hate the word "storyteller," but if you ask what connects my different careers, it was looking for compelling and relevant stories to tell. It doesn't matter if you do that through preaching, socially responsible advertising, creative technology, enterprises or games. It's important to believe in what you have to say and actually use it for good change.

Why do you think Failcore hasn't failed? What can we expect next?

We still can fail. Statistically, 90 percent of startups fail, so odds are against us. But the name signals our attitude of doing things that are out of our comfort zone and deliberately pushing ourselves in the territory of failure. That's one thing I loved in advertising—and I still adore the work ethics of companies such as Droga5 or Wieden + Kennedy, and their "Fail Harder" motto.

We are currently talking to new investors, pitching our vision for the future. We want to push ourselves from a small experimental game into the global market, with bigger games as services more than just contained products. It's a precarious moment and the risk of failing is bigger than ever, so we really look forward to pulling it off. It's almost like we are characters in our own game.

I was always informed by ideas, but as I am getting older I am more interested in how other people perceive the world, what stirs their emotions, what they feel is great. I want to explore their needs and provide them with entertainment they both want but still don't expect to get.