The writer-director tells Muse about his Adobe project

From the start, Adobe and Pereira O'Dell's "Movie Poster Movie" contest was an intriguing concept, in its reversal of the typical filmmaking process.

The challenge was: Zach Braff asked students to design a movie poster—with any title and any visuals they wished—and he promised to make an actual short film out of his favorite one.

The winning poster, by Sam West, and Braff's resulting short film, In The Time It Takes to Get There, were both released this week. The results were certainly entertaining. From a cryptic title and some minimalist visuals (a candle, scissors, a pencil and a notepad, an old-timey telephone and a mostly eaten apple), Braff created an amusing satire about influencers—with a twist ending. 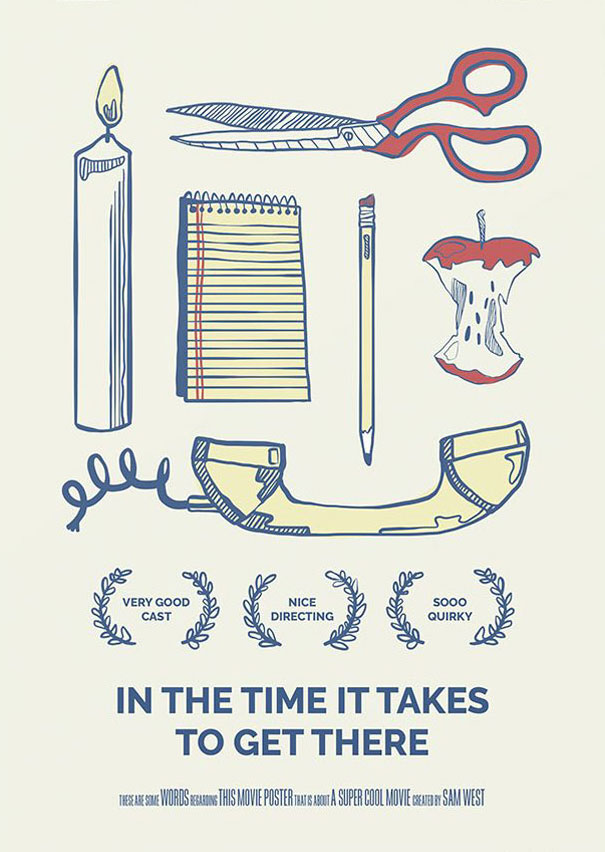 Muse spoke with Braff about the project—why he liked West's poster, and what it was like flipping the creative process upside down.

Muse: What was the judging process like for selecting the winner? What criteria were you looking for?

Zach Braff: The judging was mostly done by the folks at Adobe. I weighed in once they had narrowed it down to ones they liked. Obviously, originality and uniqueness were on my mind.

What about Sam's poster stood out to you?

It was very unique, and it reminded me of an exercise we did in screenwriting class at Northwestern. We were handed an old black-and-white photo and told to free-write for 15 minutes what was happening in the photograph. A story inspired by a photo. So I really liked the puzzle of trying to figure out how all of the objects in Sam's design were related.

From the poster, how did you come up with the concept for the film?

I made it the wallpaper on my phone, and I would just stare at it all the time. I kept brainstorming to see what all the objects had in common. Then I watched the Fyre Festival documentary and thought that social media influencers were ripe for satirization.

How long did the entire process—writing, casting, filming, etc.—take once you had the poster?

It was very quick. I wrote it over a few days. We shot it all in only three days.

You had a great cast. What was the casting like, and were they just as excited about the mission of inspiring young creatives?

I'm friends with Alicia [Silverstone] and Florence [Pugh] and asked them to be my leading ladies. They liked my script and the whole idea of it all being inspired by a student's artwork.

How was this creative process different for you, in starting with the key art and working backwards?

It was inspiring to come up with the idea from a piece of art. Easier, in a way, than staring at a blank cursor.

Why did you feel it was important to put on this contest—encouraging students to take a stab at the marketing side of filmmaking?

Well, it was Adobe's idea to throw the contest, but I thought it was a very clever way to expose more young people to Photoshop.

Would you do it again?

Yes. In a second.