This Summer and Beyond: Rethinking the Film Marketing Experience

Waiting is the last thing we should be doing

Just when the summer movie season should be kicking into high gear, theaters that have stood empty are now struggling with how to reopen and bring moviegoers back. For the past three months, Covid-19 has taken away one of our true escapes from reality: watching a film on a big screen in a dark theater while surrounded by others sharing in the experience. Ironically, it was this sense of escape that made the movie industry virtually recession-proof, even during wars and economic calamities. This time, however, it's different.

As the coronavirus outbreak unfolded, the conversation in the movie industry was one of wait and see: "when theaters reopen," "when moviegoers return," and "when things get back to normal." Now the sands are shifting in other ways as studios shuffle film openings—pushing some back and moving others up—in a release-date game of musical chairs, making their best guess about how to fill theater seats. And last week, the Academy announced it is moving the Oscars back to April 2021, creating another challenge for studios as they market their films in the run-up to For Your Consideration season. All of this seems to find us doing what we have been since the beginning: waiting.

But waiting is the last thing we should be doing. In the face of all this uncertainty, we should be adapting and pushing forward—using our creative thinking and talents to add to conversations and start entirely new ones. Make no mistake, it will be a long haul. But where there are challenges, there are opportunities too. And taking advantage of them is how we will come out ahead.

As difficult as all of this has been—it's hard to imagine much worse—social media as well as the various messaging and video platforms at our disposal are perfectly suited to handle something like this. We have the tools; let's use them to build excitement by truly engaging with our audience—conversing with them, not talking at them. We should look at shifting our media spend so we can further leverage digital efforts that speak to specific audiences yearning for connection and entertainment while reaching out to others who don't know yet what they're missing.

It's our job to provide content that film lovers are thirsting for. And it's beginning to happen already. Look at what Josh Gad is doing with Reunited Apart, bringing together casts from The Goonies, Back to the Future, and The Lord of the Rings. Ideas like this would work for releases both large and small. Providing teasers and Easter eggs as part of this is something movie fans love to latch onto. And when you give it to them, they'll come back for more.

And, interestingly, we have more access to stars than ever before. Twitter was once the great equalizer, allowing mere mortals to interact with celebrities. But now, the Covid experience has shown us the truly human side of everyone—Tom Hanks and Rita Wilson sharing the story of their struggle with the coronavirus being just one example. We can harness this more approachable star power to enhance our promotions—giving fans direct access to stars and filmmakers in more intimate and exciting ways.

Filmmaker brothers Anthony and Joseph Russo have already jumped in on thinking like this. The directors, famous notably for their MCU films as well as their DIY roots, have created Russo Bros. Pizza Film School. Every Friday evening, on Instagram Live, they get together virtually with film critic and screenwriter friends to eat pizza and discuss movies like La Haine, The Evil Dead and Ronin, relating their love for these films and the impact they've had on their career. This kind of peek behind the curtain of their thinking connects across the board with film buffs, movie fans and aspiring filmmakers.

Another example of reaching out to connect with audiences is something my team at McKinney LA executed for the Picturehouse release of Fatima. Utilizing Facebook Premiere, we created a virtual pilgrimage to maintain awareness of the film, which has seen its release pushed to August. We saw an amazing level of engagement with just a minimal media spend, proving that smaller releases can find new ways to cultivate audiences ahead of their release.

Thinking like this seems so simple and obvious, but it's something we should have been doing all along. Other ways to reimagine boosting digital releases, as well as eventual traditional film releases, could take the form of innovative press tours involving fans with Q&A sessions and panel discussions. And filmmakers themselves need to seize the reins, getting their voices and perspectives out there by writing about their work and releasing content to tease their films.

One thing is clear: It doesn't make any sense to play it safe and wait this pandemic out. Where we can afford to, we should promote our films robustly. Where money is tight, we should find ways to shine a bright light on a shoestring. As I pointed out with Fatima, it's possible to make a splash with minimal spend. People will continue to crave content and conversation about the film world, and that makes this the safest time to advertise. Letting people know you're still here is the best way to make sure you reconnect as the industry regains strength.

Finally, as we continue to navigate our altered version of normal, marketers, studios and filmmakers alike have to lead the way in reimagining the future of the industry we all love. We have the opportunity to expand the world of film by doing more than producing easily consumable entertainment. We can create social/digital/stunt/surprise/personal experiences that will invite people into our world as never before. And if we do, those audiences will want to stick around for the second half of the proverbial double feature. 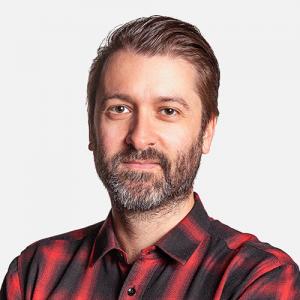 Sylvain Tron
Sylvain Tron is managing director of McKinney LA, a creative and production agency that lives at the intersection of Madison and Vine.
More from Sylvain Tron