But maybe don't try this at home

Social isolation's a snap, thanks to Kip Dynamite!

Aaron Ruell reprises his star turn as the insular, internet-chat-obsessed older brother from the 2004 cult comedy classic Napoleon Dynamite in a series of "Kip's Tips" shorts he created in lockdown and posted to IGTV.

Kip is older, but no wiser, delivering Covid-19 tips in deadpan whiny bursts, each a few minutes long. They're inanely delightful! Dude's as bespectacled and mustachioed as ever, shirt buttoned right to the top. At various points, he advises using Grandma's brassiere as a face mask, preps a "recipe" that involves emptying a bag of potato chips into a bowl (you can add cheese to make them "fancy"), and hefts depleted T.P. rolls like free-weights to stay in shape.

"A lot of you are struggling with this whole social distancing, self-isolation thing," Ruell-as-Kip declares in the series' introductory clip below. "I've basically been doing this my whole life. So, I figured, maybe I could offer some help to people, give you some tips on how to pass the time."

"I'm going to use the power of dreaming later this evening to come up with some inspiring tip for tomorrow," he says. "So maybe I'll see some of you then. Maybe I won't. Who knows what's in this deck of cards?"

Though best remembered as Kip Dynamite, Ruell is also an accomplished film and commercial director who signed with production house Sanctuary Content last year. He's helmed notable spots for Coca-Cola, Charter, Lyft, McDonald's and Volkswagen, among others, and many of those ads share the quirky storytelling sensibility of Napoleon Dynamite. In 2005, two of his short films premiered at the Sundance Film Festival, and he's also published several books of photographs.

For Ruell, Kip's Tips is a passion project—the static-laced, homemade style of the clips very much in sync with their namesake's warped (but lovable?) personality.

Below, Ruell chats with Muse about the shorts and discusses his favorite brand projects.

Where are you isolating? Where's Kip at?

Aaron Ruell: Home isolation location is in Portland, Oregon. That is where the house party is happening on the daily for me. I've got four kids under the age of 10, so I'm honestly not doing anything for myself. It feels like my wife and I are running a daycare. Attempting to have four classrooms each day is pretty full-on and doesn't leave me much time outside the window of 7:30 p.m. and 10:30 p.m. And by that point I just want to zone out with a film or listen to music.

Kip is isolating in Preston, Idaho, with his grandma. As soon as he got word that geriatrics were high-risk in regard to Covid, he hightailed it to be with her. Other than that, his daily life hasn't been interrupted whatsoever. He continues to spend his time indoors and online. All day. Every day.

Why'd you decide to address the crisis in character?

I was very reluctant to bring Kip back. During the first week of lockdown I read a headline that went something like, "Who can we turn to as the social isolation expert?" Kip popped into my head, and I started to smile. Here was a guy who has spent his whole life socially distanced. And this idea came early on, when people were looking for anything to be happy about. It was that awkward first couple of weeks where we hadn't settled into being home all day. And I figured if this could bring even a couple of smiles, it was worthwhile.

Kip is the authority on social distancing and self-isolating because that is what his entire existence has been made up of. His social life is one that is entirely online. And the only time he leaves the house is when it's an absolute must. Essentially, that's how each of us are now living our lives.

What's he been up to all these years?

In my mind, Kip has probably had a nice life with Lafawnduh [his girlfriend in the film] over the past 15 years. But Grandma will always be his first love. Which is why he would drop everything to be with her in this time of crisis. Although it's very likely that Grandma would much rather be alone.

Can you describe your process of making the shorts?

I called my friend Jared Hess, who directed Napoleon Dynamite, and asked him, "You think that people would be into Kip coming back in these little clips called 'Kip's Tips'?" And he immediately responded, "YES." So he sent me Kip's glasses and a couple shirts. I wanted it to be as true to the character as possible. If it was halfway there, it would feel contrived and not true to that world and character. I shaved off my beard as well, which was a big issue for my kids, since they've never seen me without a beard. There were some tears involved. But when I explained that Kip's Tips might make some people happy, they came around to the idea. And stopped crying. 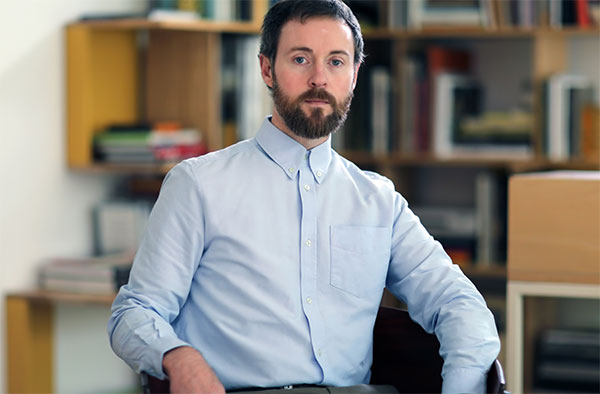 Making them is pretty straightforward. I set up a DSLR and mic and sit at my desk. I edit each piece in iMovie and then run it through a filter that gives it the older look. Hess gets all the credit for that. When I sent him the first cut he put the footage through this filter to give it more of a look that spoke to the technology that Kip would be using, and that really made it work.

I always start shooting with an idea of what Kip's tip will be. And I'll have a couple lines scripted, mostly just words or phrasing that sounds good coming from Kip. But I always want it to be surprising to me, so I don't script it too much, since the weirdest bits come through in the moment.

What sort of reaction are you hoping for?

I honestly had no end goal with this other than to provide smiles for people. I had no idea who the audience would be or how to reach them. There was a part of me that thought it would be so funny if no one discovered these for ages and they were just floating around out there. But then, that defeated the original end goal. It wasn't about me laughing, it was about others. I wasn't sure people would even respond to the idea. I sent the first clip to some close friends and asked, "Is this funny?" I wasn't sure.

Kip isn't for everybody. Plenty of people will find his tips entirely dumb. And that's OK. But I've found there is an audience of people who message me saying that these clips are making their days or weeks. Some are watching them together as families on weekend nights. Some keep asking me, "When is the next tip? I've watched these so many times and I need a new one!" Which is tricky, because now I feel a tiny bit of pressure to keep it going. And I'm not sure how long I'll continue with it.

Truth be told, I shaved off my mustache last week because I was tired of looking like some weirdo pervert. I just couldn't handle the look any longer. Some people look very dapper with a 'stache. I on the other hand just look like a pedophile. So, the next round of Kip's Tips will need to wait for the mustache to come back.

Which tips are your favorites?

"Mask." This idea came to me in the first week of lockdown. No masks to be found. Everyone needed one. And the shape of a bra is similar to a face mask. And the idea that Grandma would have these old bras lying around that she no longer wears seemed perfect. That tip is far longer than I'd like but I was still feeling things out and it does have this really odd Mr. Rogers tone to it that I really like. The weird thing is that weeks later this bra-mask idea was actually being used. Bizarre.

"Recipes." You have to remember that Kip shouldn't be giving any advice to anyone. At any time. So when it's a "recipe tip," it's going to be something subpar, like everything else in Kip's life. So the idea of simply pouring a bowl of chips and that being a "recipe" gives you real insight into Kip's way of thinking. I like that about it.

"Fitness." I like this one because it took me a while to find it. I had another fitness clip that I was going to post, but Kip was coming across too strong, almost like he had found his mojo as a tip giver, and it wasn't making me laugh. So, I set things up again, got back into Kip mode, and the empty toilet paper rolls as dumbbells came to me. So, I like this one because there was some trial and error involved.

Does Kip always loom in the back of your mind, telling you stuff, giving you (bad) advice for various situations?

Here's the thing about Kip—he's basically my real life brother. I have a brother who lives with my parents, and he leads the life that Kip does. Or vice versa. So Kip is always in my life and I'm constantly getting material from the "real-life" Kip—my brother.

When you played Kip all those years ago, did you have any idea he'd become a pop-culture icon?

I never thought Kip would be remembered after the film. The fact that anyone even wants to hear from him is so sweet and makes me feel really lucky to have been part of that.

Talk about your commercial directing work. Which spots are you especially proud of?

The goal in my work has always been about attempting some type of sincerity in it. Whether it's comedy or drama. I'm fond of my Coke "Earn It" spot. It's a Christmastime spot about a boy gifting his little brother a bicycle. I like the tone and sentiment in that one.

I like a VW spot I directed for the French market called "TV." It's odd but nice, and I still have no idea what the spot was meant to promote. [Editor's note: It channels a certain mid-oughts indie fave.]

I recently directed a PSA for amaze.org about the importance of parents teaching their children about sex before the internet does. It's a solid message, and I hope it resonates with parents that need it. [Note: That campaign breaks May 1.]

Were you working on any new stuff that got interrupted by Covid-19?

Oh yeah. I think like most people I was submitting treatments, bidding, and even receiving boards right up until the Friday before everything shut down. I thought the writing was on the wall, but I think agencies didn't want to see it, or were at least pretending it was going to get better.

When the lockdown ends, what's the first thing you'll do?

I look forward to traveling again, seeing old pals, taking hikes, going out to movies and just getting my kids out of the house! I feel so bad for them, because their entire world has only been our house and neighborhood walks. I'm going out to eat every day after all this. I miss eating at my Portland spots. We have some of the best food in the country out here, and I really hope these small restaurant owners and chefs are able to make it through this.