When SXSW was canceled, it doused thousands of dreams—not least those of filmmakers whose work had been accepted into the film portion of the festival.

Now, Mailchimp is stepping up to support those artists by launching #SupportTheShorts, a project that includes free online streaming of short films that were due to screen at SXSW, but of course were never shown after the entire festival was canceled due to coronavirus.

Mailchimp worked with boutique distributor Oscilloscope Laboratories and SXSW on the project, with support from agencies Code & Theory and Kin. Mailchimp has added a SXSW page to its existing Mailchimp Presents content hub. There, you can find 45 short films available for streaming right now, for a limited time without any login. More films will be added in coming days.

The films will be up for at least 30 days. The filmmakers can then take them down, or leave them up for the remainder of the two-year SVOD license, according to IndieWire.

"SXSW has long been a champion of filmmakers, and premiering a short film at the festival is a one-of-a-kind opportunity for creators to share their vision with the world," Mailchimp said in a statement. "When SXSW had to cancel this year's festival, hundreds of independent filmmakers lost that opportunity. Together, Mailchimp and Oscilloscope have created a digital home for this incredible slate of short films, so you can watch them from wherever you are. While we can't replace the camaraderie of the SXSW festival, watching these films is a way to support the artists you love and connect to the world around you, during a time when we could all use a little more connection." 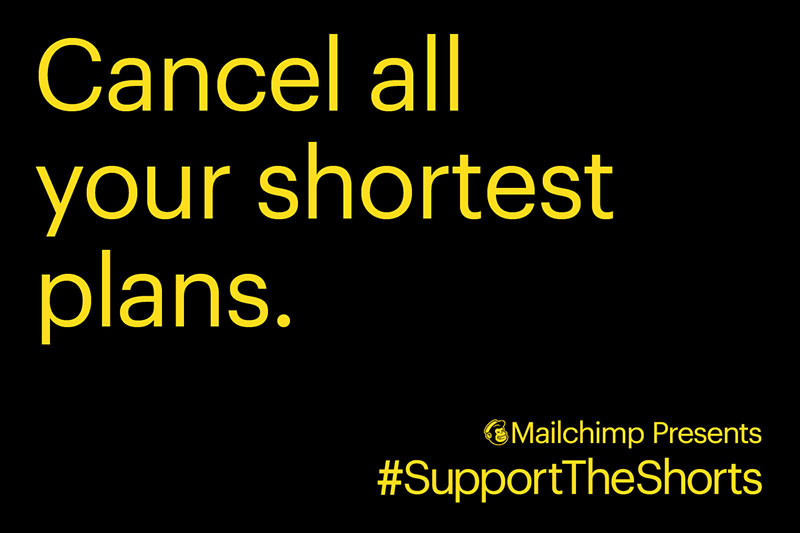 Sarita Alami, director of programming at Mailchimp Studios, said it worked on an "outrageous" timeline with Code & Theory to get the site built.

"But one of the amazing things about this frightening and uncertain moment we're living in is that people seem really eager to help each other solve problems creatively," Alami says. "We'd been dreaming of working with Code & Theory for a while and were thrilled to have it be on a project that we were all this excited about. It was pretty shocking how quickly everything came together. We had people from Mailchimp and Code & Theory and Oscilloscope all screening and QAing and uploading films from their houses over the weekend, racing towards a deadline."

The hub has a stark yellow-on-black color scheme. Hovering over each title reveals an image from the film.

"It was our priority to let the films shine, so we chose a minimal, brutalist aesthetic using some remixed core brand elements, to let the content take center stage so viewers could dive right in," says Katie Potochney, senior director of brand design at Mailchimp. "The rawness of the site also represents the speed at which the teams worked to get these films online to support these creative filmmakers."

Kin, an agency founded by Kwame Taylor-Hayford and Sophie Ozoux in 2019 and committed to various forms social good, handled tasks including creative strategy and creative messaging for the project.

"It was important to us that the filmmakers and their communities play an active role in the project to support their films and get the word out about #SupportTheShorts," says Ozoux. "Mailchimp agreed so we developed a toolkit of digital assets, including a few lightly branded elements, that the filmmakers could use to appropriate the platform for themselves by customizing content to share on Twitter, Facebook and Instagram."

"As #SupportTheShorts evolves, we're discussing with Mailchimp the best ways to create a lasting, positive impact on these filmmakers and their communities," adds Taylor-Hayford. "How can we get them more opportunities to create and showcase their films? How can we ensure they have the support and resources they need? How can this platform become a catalyst for their careers? These are a few questions we'll be debating in the coming weeks."

Code & Theory designed and built the site on a remarkably short timeline.

"It felt a little bit like old school Code and Theory—we threw a strong team at the project and cranked out initial designs in a day, and the entire site in a week," says Brent Buntin, the agency's chief marketing officer. "Mailchimp was an amazing partner, and even with the entire process being done remotely, we felt like we were one team."