Haven't we all been there? 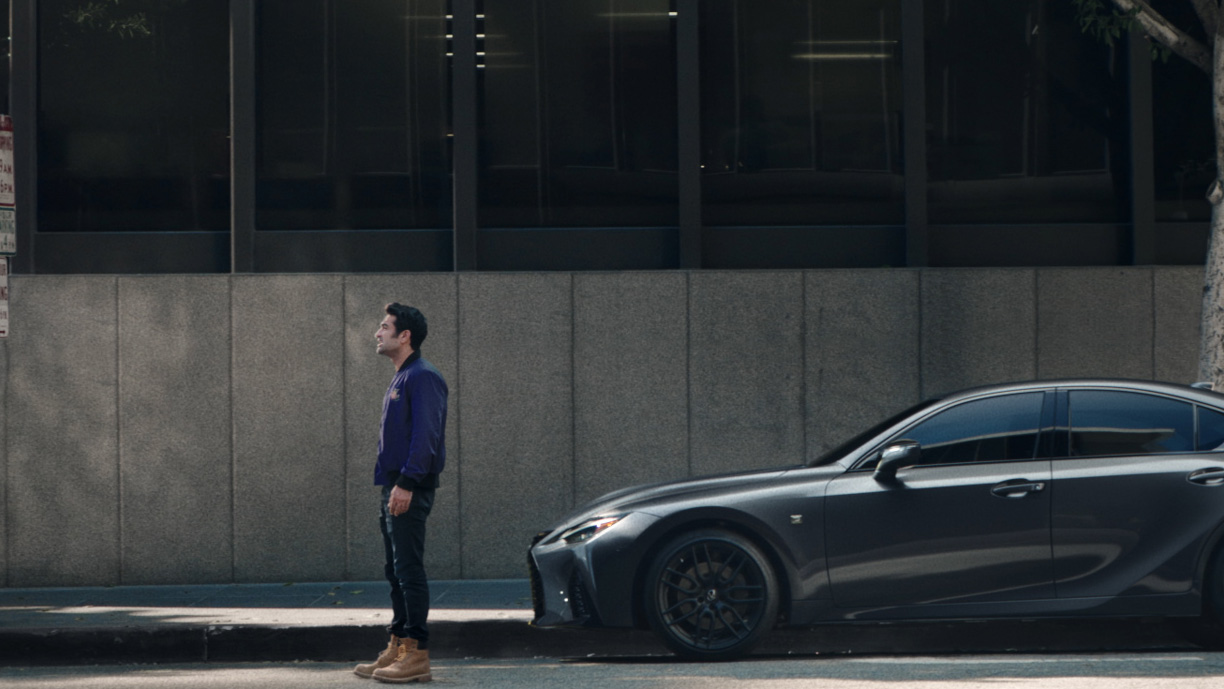 In an amusing collab between Lexus and Marvel Studios' Eternals, Kumail Nanjiani helms a Lexus IS 500 S Sport Performance (you will never remember that, we know) as the city collapses around him.

We give you "Parking Spot."

Directed by the Russo brothers, who previously worked on Avengers: Endgame, Nanjiani appears as his Eternals character Kingo, a cosmically powered swordsman and Bollywood film star.

Some dangerous supervillain nonsense is going down. But Kingo can't help out until he finds a safe parking spot.

While navigating this universally frustrating task, he fields impatient phone calls, falling concrete, aggressive "no parking" signs, pigeons, double-parkers, and one of those real slow old ladies who just got a call from her grandson, right in front of his car.

It sounds like a video game. But parking is a weird and treacherous game. It engages you without your consent, and merit doesn't matter; a car that just showed up could still grab that fresh-freed primo spot before you do, regardless of how many times you've circled the block.

Parking mocks everything you hold dear, and doesn't care if you need to pick your kids up from your ex's house or get to the job interview on time. Successful parking in high-traffic zones is mostly luck. Thus, you are reminded that Fortuna is fickle, you control nothing, and your priorities are functionally meaningless.

Even if you're Kingo, trying to save humanity.

Kingo's struggle feels a lot like life, blown up and made bombastic. "Oh, is there a big battle going on? I couldn't tell. Stop calling me!" he shouts, finally frustrated over the tipping point with the urgent calls that plague his already-divided attention.

In today's Marvel universe, this kind of comedy is pretty standard fare—an amusing balance between relatable, deprecating humor and superhuman high stakes. But it also weirdly serves to elevate Lexus.

A Lexus is a pricey car, but not always an exciting one. It's not a Tesla or a top-down Audi roadster. It's a payscale or two up from a Nissan, with a pearly finish.

That's also how we market modern superheroes: They're like me and you, quirky and occasionally annoying or selfish, but leveled-up, usually by some accident of chance that they had little to do with themselves. The fictional magic that makes Kingo who he is really only means his responsibilities and problems exist on a different scale, but ultimately the stresses are the same.

The city is collapsing. But he still doesn't want to park under a row of pigeons, or risk a parking ticket.

Kingo's just a guy with cosmic powers and the inability to die. The Lexus is also just a car, upscale but innocuous … but this one's a V8, capable of navigating sudden last-minute twists and turns through hellfire while equally also capable of ensuring that each and every call you get still pops up on your dashboard at the least convenient moment.

Still, this is an ad. Kingo's stakes are higher than your job interview; his job is protecting humanity. And the Lexus IS 500, with its super-nifty eight-cylinder engine, is the car he chose to get there. Look at that! A shopping cart slammed into its bumper and popped off like a paperclip.

"There's a natural synergy between Marvel Studios and Lexus," says Vinay Shahani, Lexus VP of marketing. "We both go all-in to deliver amazing experiences. We're incredibly excited to team up with Marvel Studios' Eternals to showcase our very own superhero, the first-ever V8 IS 500, which ushers in a new Lexus F SPORT Performance Line."

Anyway, Kingo finds parking. His phone rings. "Yeah, yeah, I'm a seven-minute walk away!" he snaps, running for the carnage as the shot fades out. The Lexus, of course, takes center stage.

"Exhilaration is eternal in the first-ever V8 Lexus IS 500," intones the new voice of Lexus branding, Gaius Charles, just prior to this little easter egg moment. "See Marvel Studios' Eternals, only in theaters. Experience amazing at your Lexus dealer."

"Parking Spot" features visual effects by Framestore. The movie Eternals, directed by Chloé Zhao, hits U.S. theaters on Nov. 5. In addition to a whole passel of celebs, including Salma Hayek and Angelina Jolie, it features cameos from the Lexus LS 500 flagship sedan and NX luxury crossover.