Inside the Wonderfully Grumpy Billboard Campaign for The Grinch

If you've driven around Los Angeles, or walked through Times Square, over the past six weeks, you've surely encountered the giant green face of The Grinch, as newly incarnated in the Illumination and Universal Pictures film that hit theaters Nov. 9.

The out-of-home campaign has been a memorable one—for its stark visuals, its high-profile placements, and most of all, its irreverent one-liners, in which the Grinch comments on the city, or even the neighborhood, where each board appears. 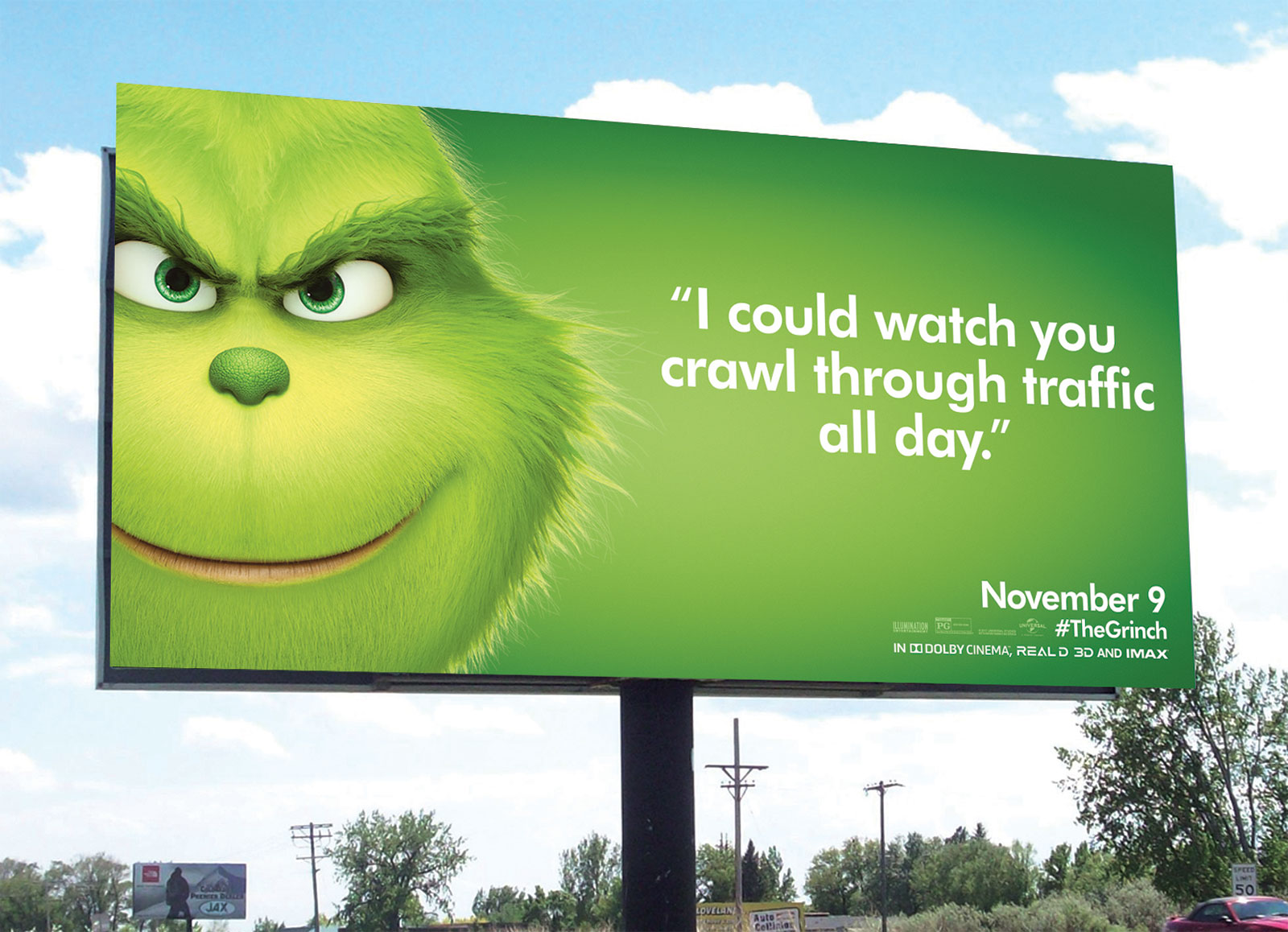 The campaign even pokes a little fun at the film itself, with an L.A. board that reads: "Another remake?! Hope you're proud, Hollywood." 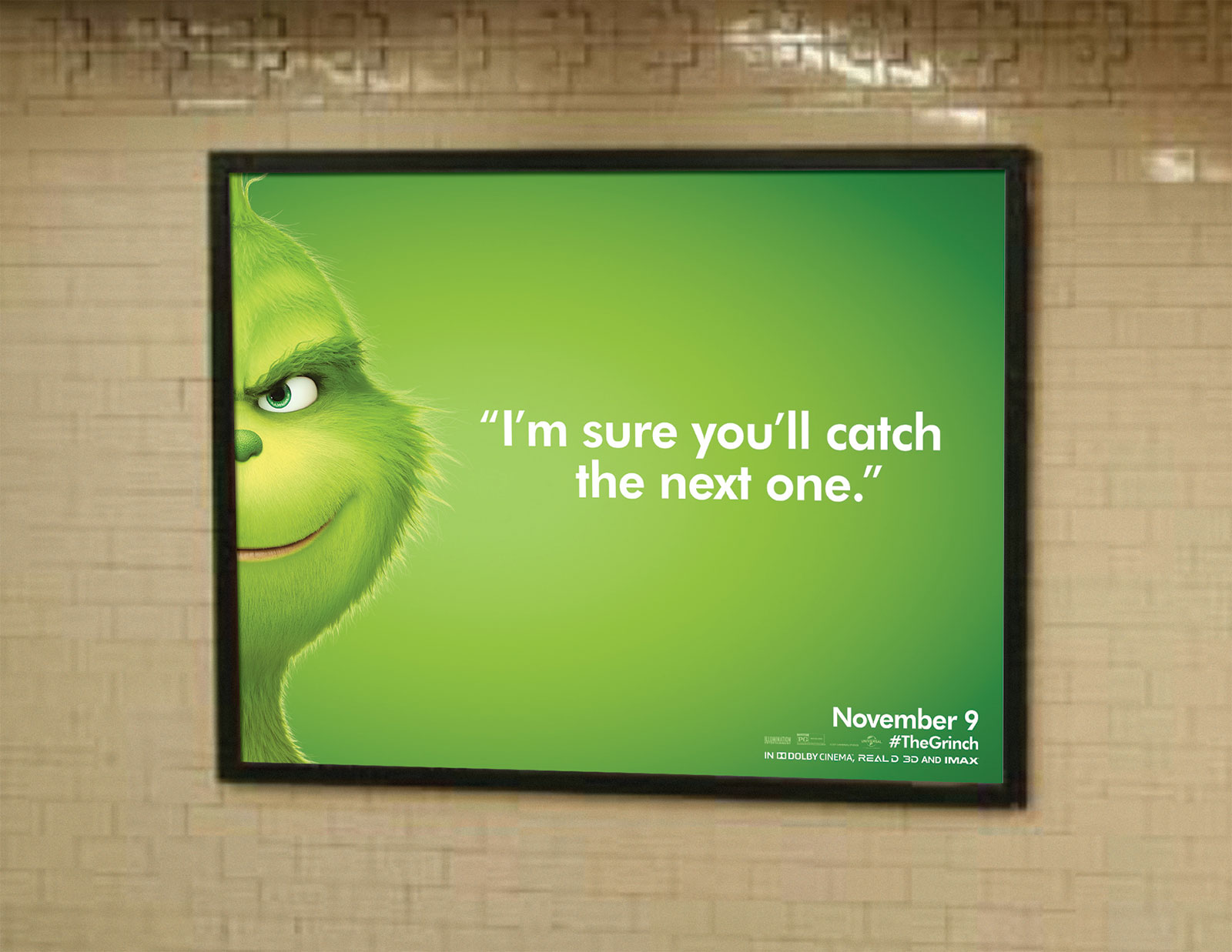 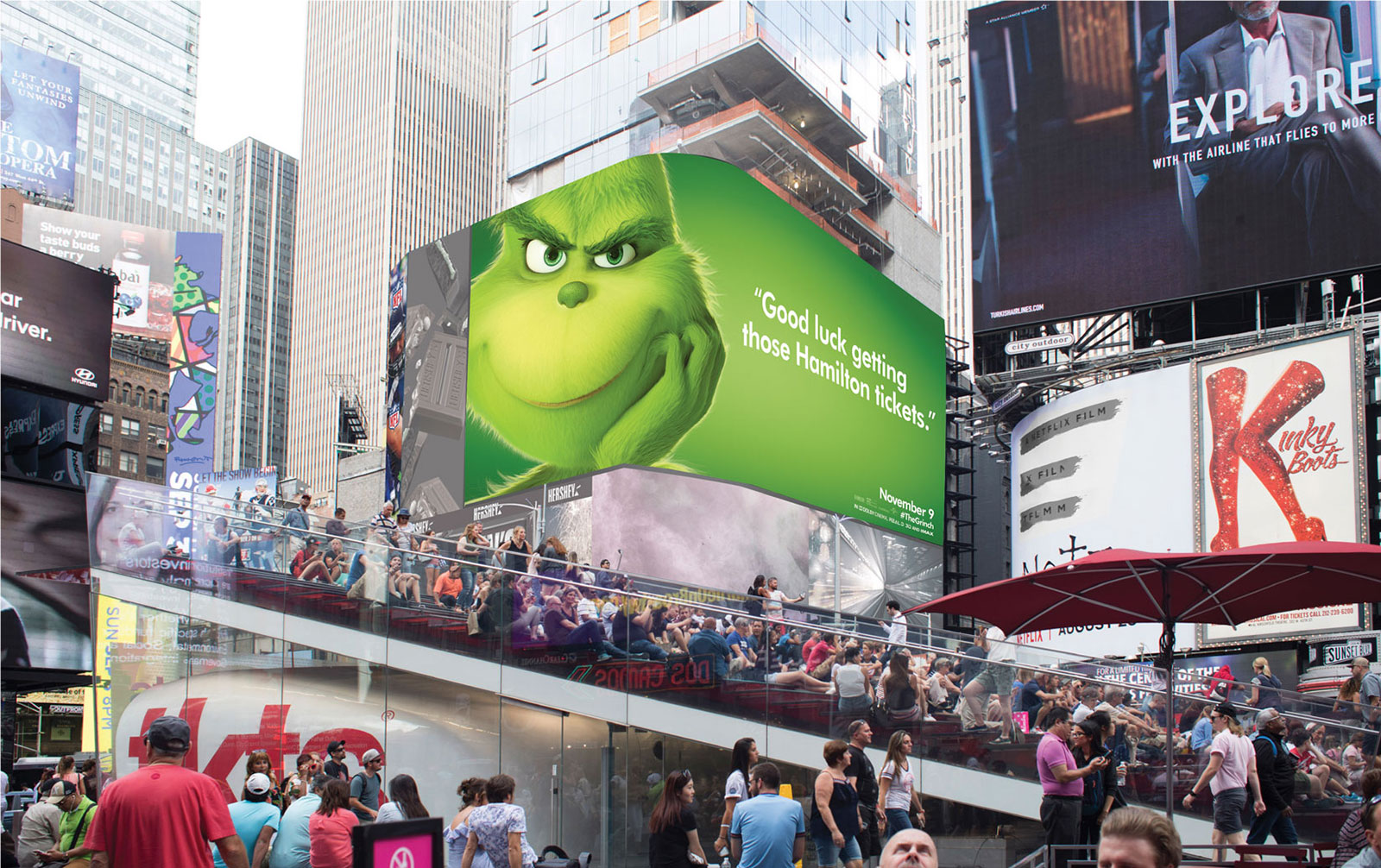 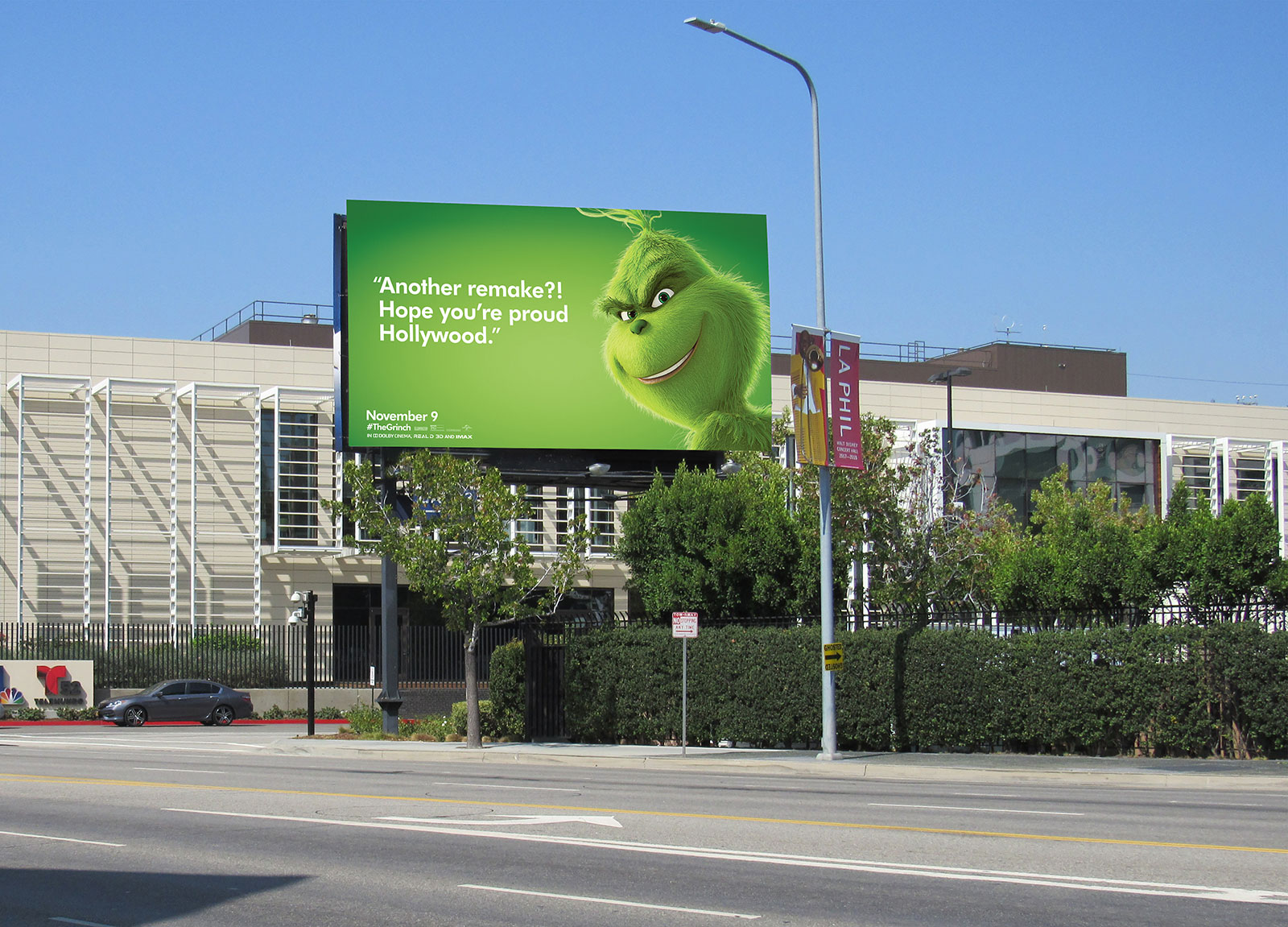 Between printed and digital outdoor boards, the campaign has featured about 200 unique headlines. Hundreds more were written and discarded, as the creative team tried to get the tone just right. Beyond New York and L.A., the billboards also went up in Chicago and San Francisco. Wild postings hit another 10-15 outer markets.

Muse caught up with Joe Wees, vp of creative advertising at Universal Pictures, to talk about the campaign, created in partnership with Illumination. He explained the origins of the idea, how the attitude of the out-of-home ads spread to the rest of the campaign, and how the writers found a balance in the copy between too rough and too soft.

Muse: Tell us where this idea came from—to do site-specific outdoor, and to do it with this tone.
Joe Wees: It originated really early on, I think before the first trailer went out. We were examining what differentiates this Grinch from previous Grinches, as well as what will help us stand out. One of the great things that [animation company] Illumination does is they give attitude to their characters. The Grinch will always have an attitude, but if you think about Despicable Me with Gru [also made by Illumination], there's an attitude behind him too. Gru always comments on life around him. He's just upset at things. That spawned early conversations of, "We need to have the Grinch comment on things."

My first pitch to [Universal president of worldwide marketing] Michael Moses and [Illumination CEO] Chris Meledandri was about buying billboards above coffee shops and saying things like, "Ugh, another coffee shop." We all have a little Grinch in us. When we see things, we get annoyed by them. But finally, he's speaking to it. That was where it came from.

You're goading the audience a little bit. Were you concerned about how to get the tone right?
Very, very concerned. There's a fine line, and I think we probably overstepped here and there. We probably wrote tens of thousands of lines, trying to find what's too soft, what's too rough, and what hits that sweet spot. You never want to be mean, you want to incite a smile. Maybe you'll upset a couple of people. That's not the goal, but you're going to rub some people the wrong way whatever you do. We would examine each line, and if it felt like it was mean-spirited, we couldn't do it. Nor would we want to do that.

How did you figure out that balance?
The perfect line that, I think, helped us find the tone was something as simple as, "Rude. Loud. Angry. New Yorkers are my kind of people." He's talking about their personality, but he's kind of relating with them. It has a tough tone to it, but also a fun tone to it. Or when we did, "Keep honking. It'll make everything go faster." He's legitimately speaking to the situation, like, "Come on. Let's be real. This isn't helpful." 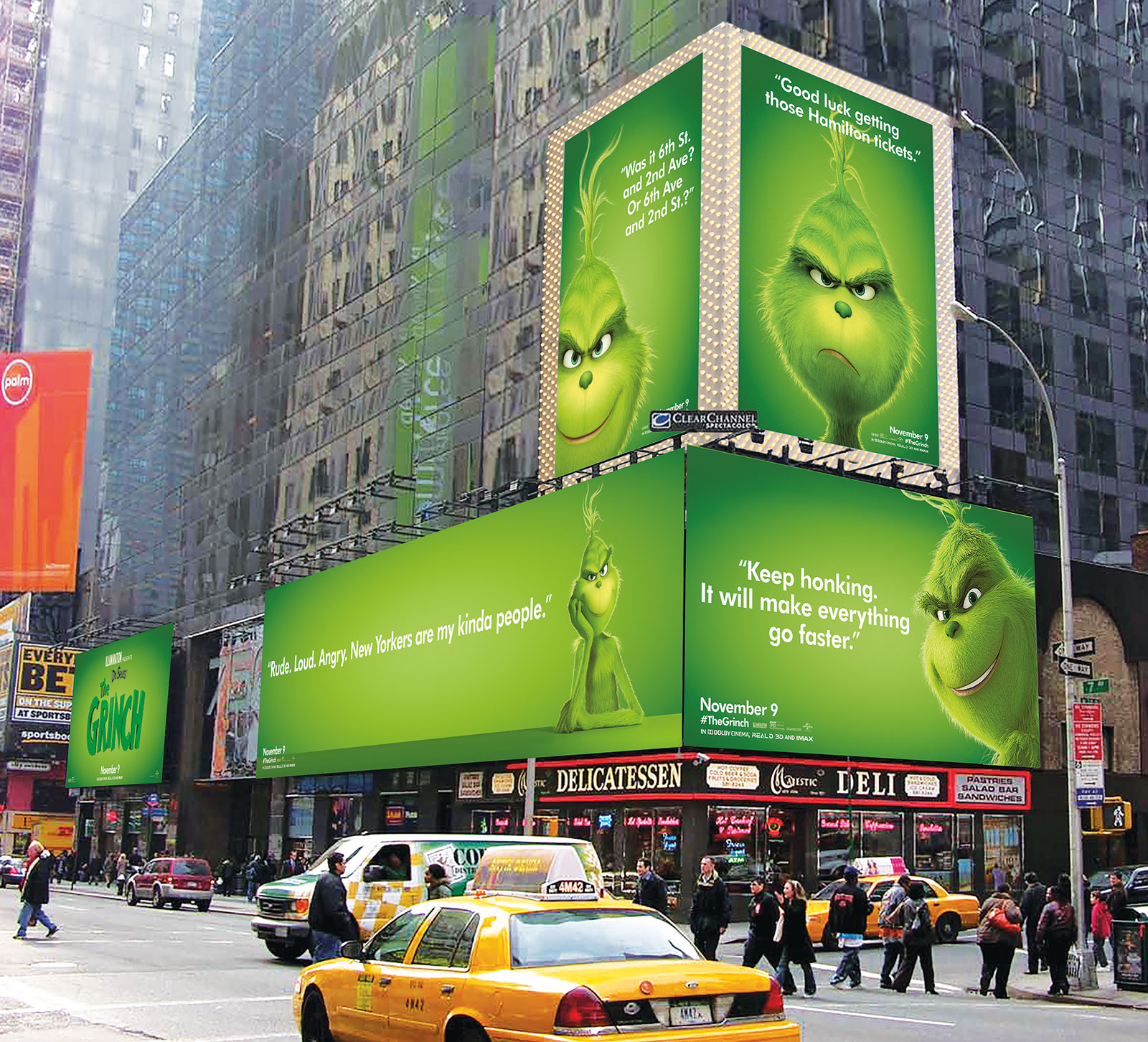 We bought a billboard on the PlayStation Theater in New York. And we wrote a line that was, "I'm more of a Nintendo kind of guy." We couldn't do that. PlayStation owns the board. They're like, "We own the board. We don't want it to say that." That didn't go too far in terms of being mean, but it still went a little bit too far for them.

Part of why these billboards work so well is they provoke a chuckle, because people can laugh at the annoyance they do feel about things, right?
Correct.

The ones that struck me when I was in L.A. a few weeks ago were the ones about traffic. "I love it when this light turns green and nobody moves." That's a really irritating situation to be in, and to see a billboard speaking to that, as you're in it, you've got to laugh, right?
100 percent. I'm from Nebraska originally, and one of my main issues with Los Angeles—I've been here for over a decade—is the traffic's gotten worse. And so, when we were doing this, it gave me an opportunity to speak to the city a little bit.

There's a six-point turn that we bought a billboard by—it's near Pico and Fairfax, it's one of the hardest situations to navigate. The line was something like, "I love watching you navigate a six-point intersection." Because you do—you sit there like, "Is it my turn? Your turn?" We also did "I can watch you crawl down the 405 all day" or "I love it when the light turns green and nobody moves." That intersection at Franklin and Highland is the most highly congested, especially during Hollywood Bowl.

We stay right around there when we're in town. We saw that one a lot—while stopped at that green light!
[laughs] Yeah. We also did "You're going to be late," because when you're in that situation—do you want to cry? Do you want to yell? Finally, somebody's able to relate with you a little bit. 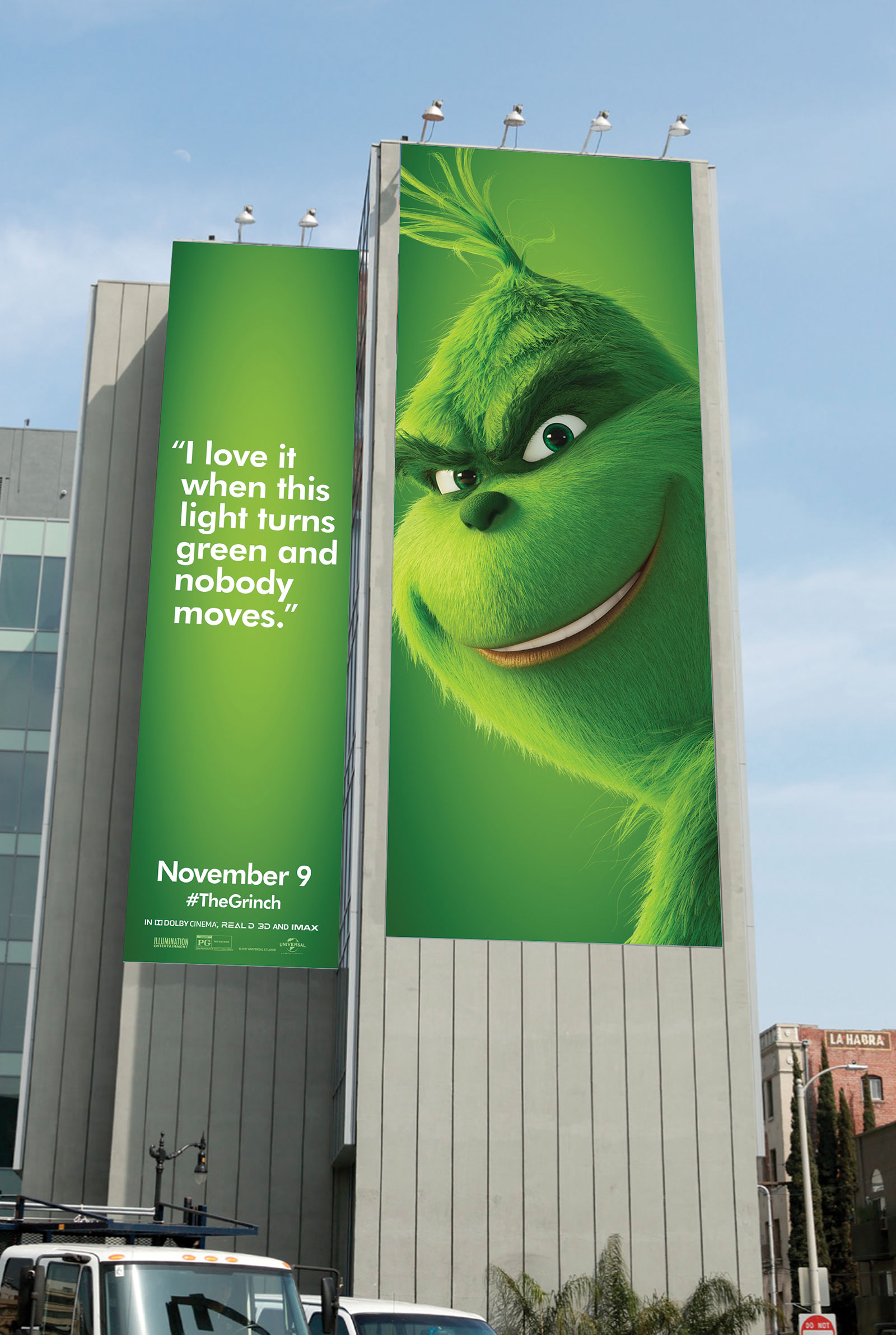 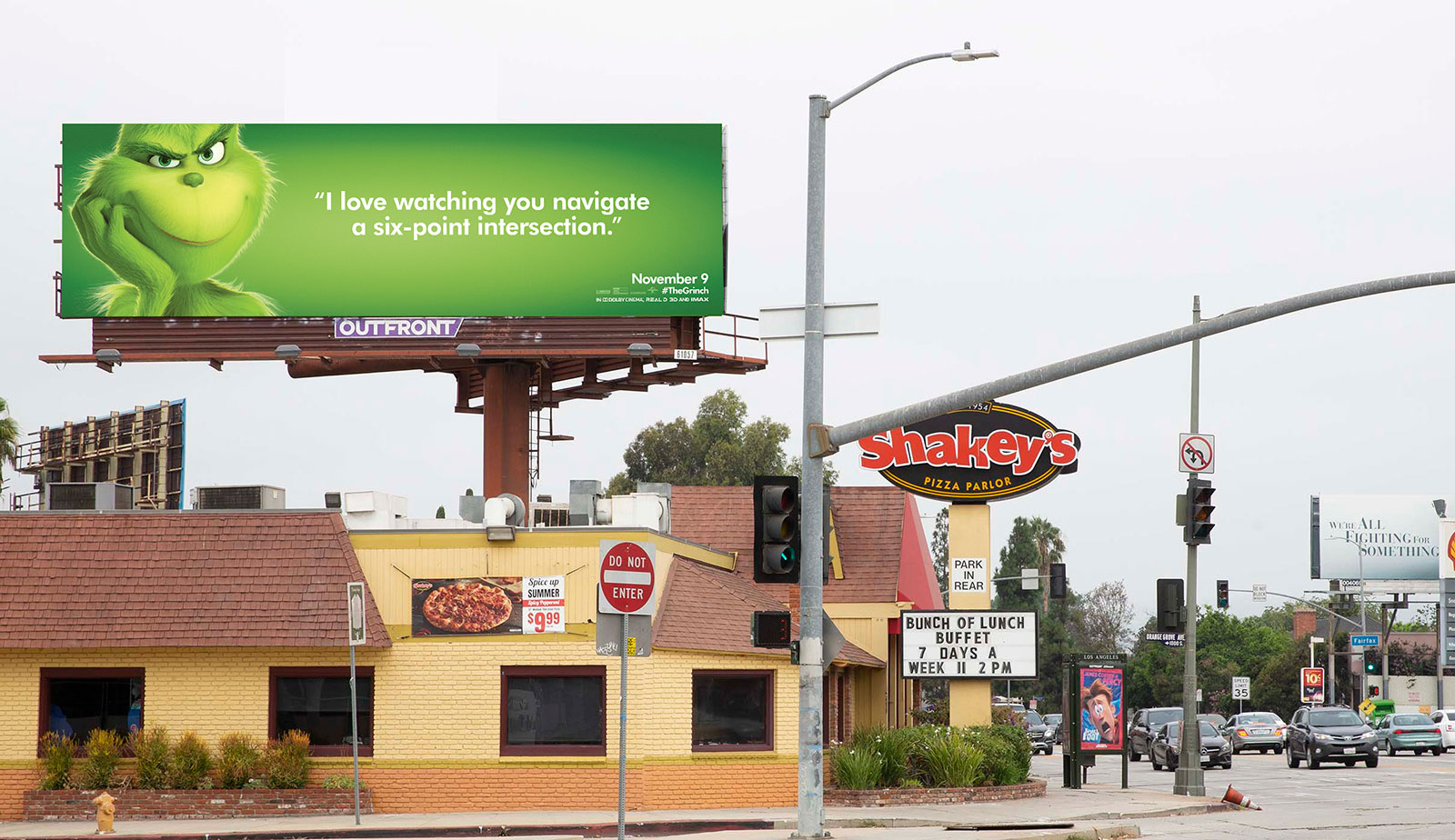 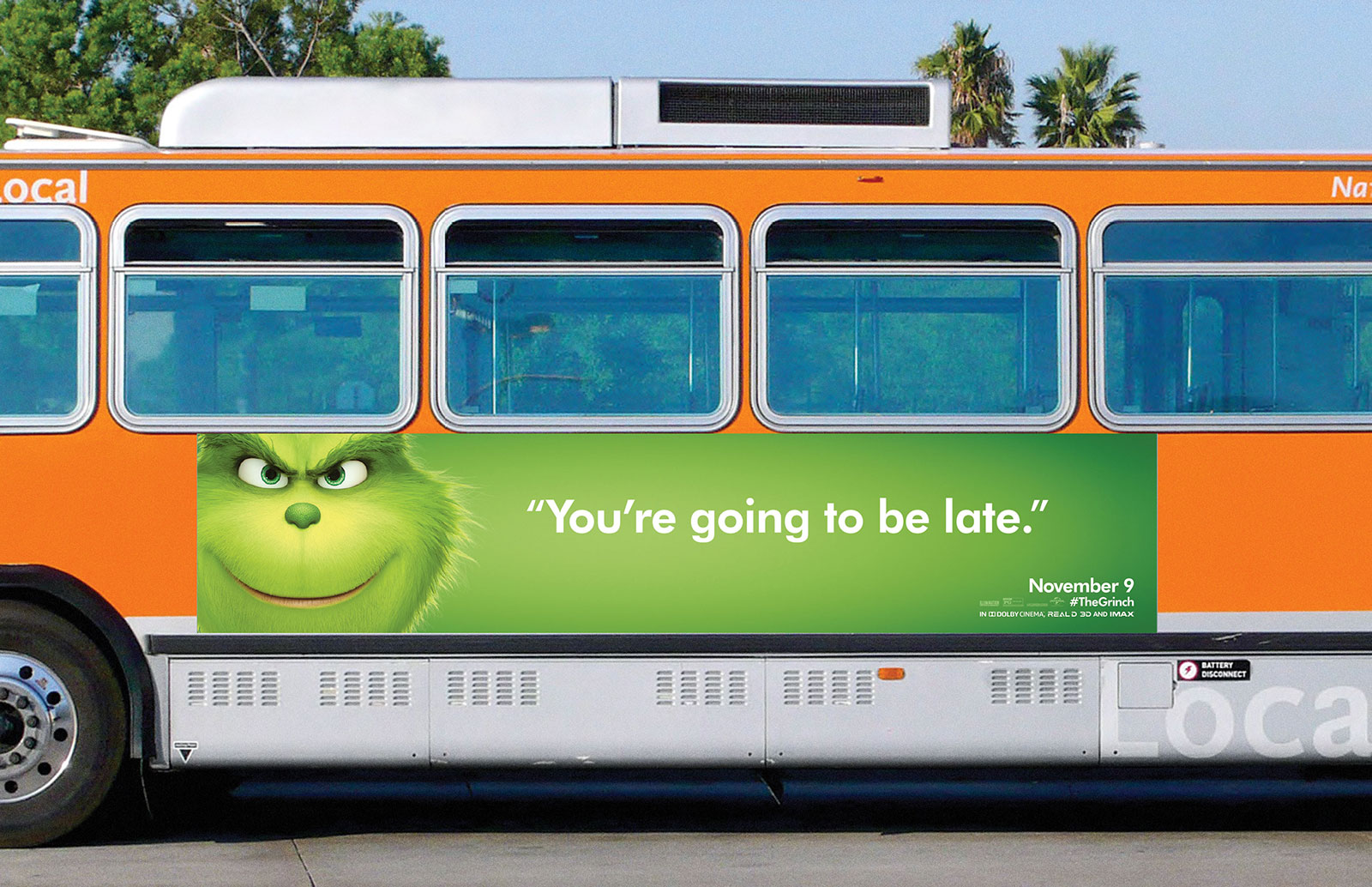 "Of course you'll make it as an actor." For all the struggling actors, that probably cut pretty close to the bone.
That wasn't meant to be mean. It was more like, "Everybody comes here to be an actor." It was more just trying to speak to what makes Los Angeles Los Angeles. That's one of those things we had to examine: Are we inciting issues, or is this something that we think we can be OK with? But yeah, you're right. It probably was a little harsh. But it wasn't intended to be mean or harsh. It was more just to have that Grinchian voice.

I guess it also depends on what the person seeing it brings to it, too.
Correct. 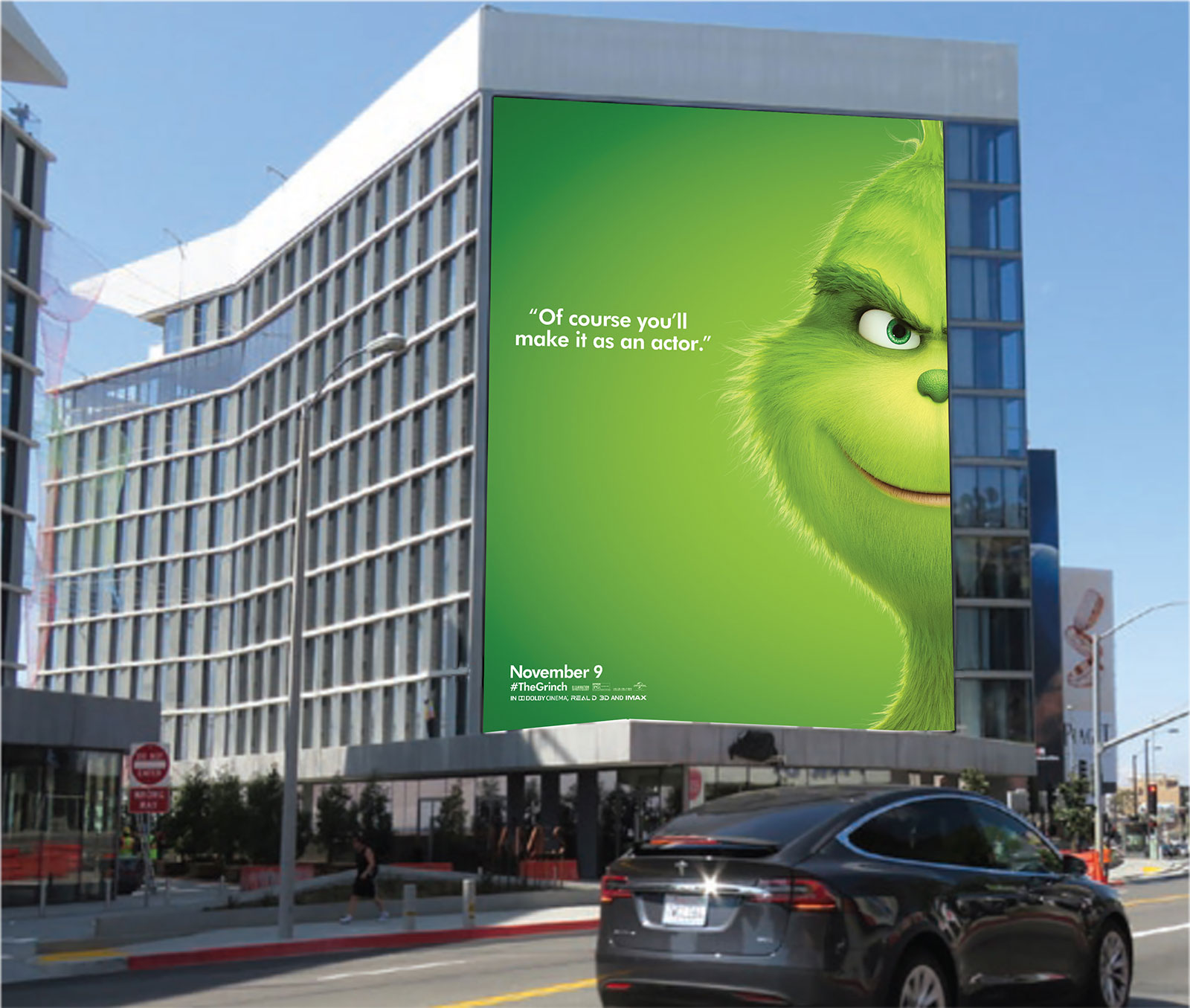 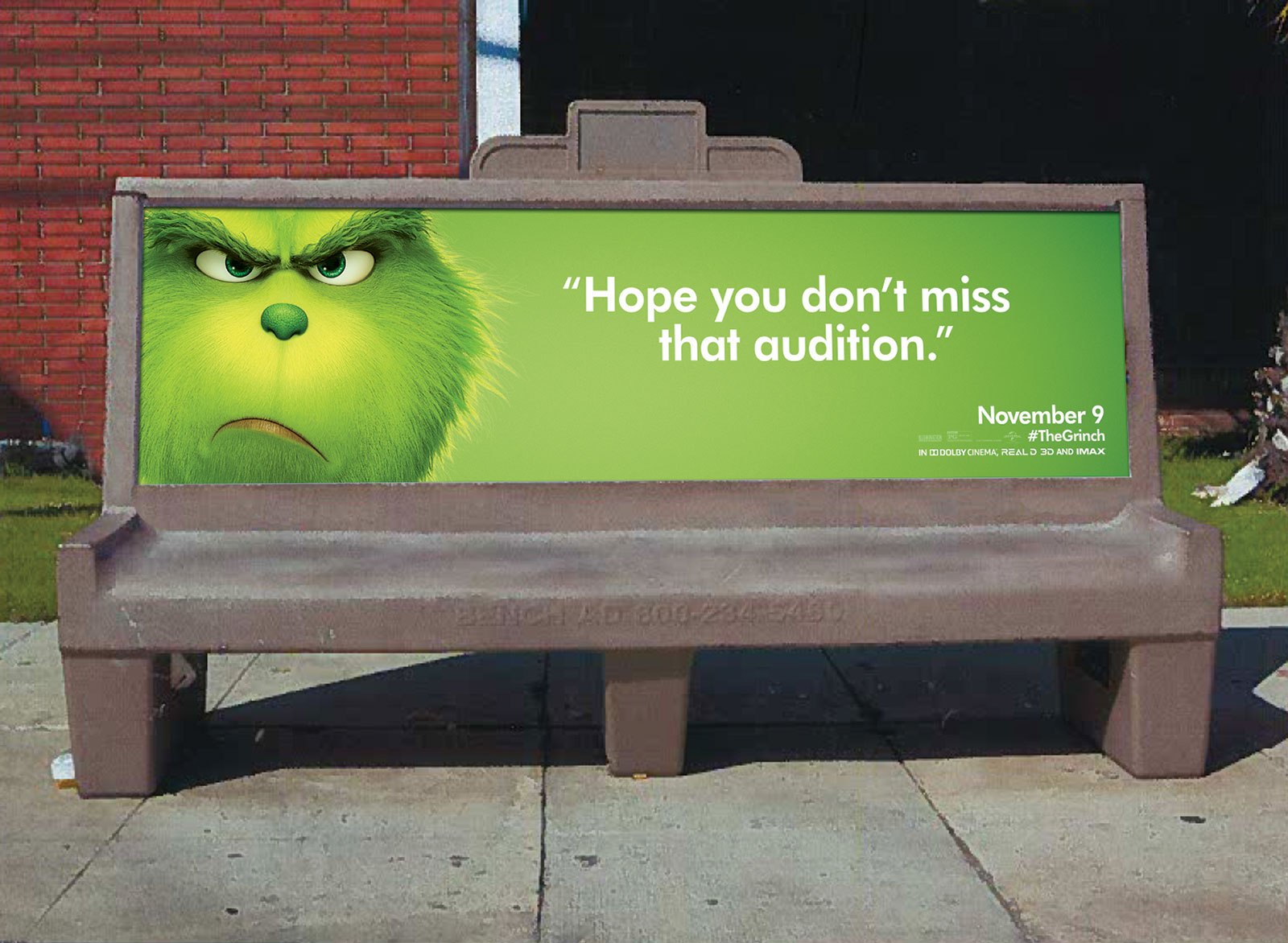 Did this tone that you captured in the out-of-home work extend to other parts of the campaign?
It did. When we came across this tone, it really was a breakthrough for the campaign as a whole. It helped us identify who his character was early on. Not everything ended up using direct lines [from the billboards]. But the direct lines definitely influenced the tone—from the television campaign to the digital campaign to internal meetings, where we go on roadshows and show it to salespeople and internal people. I would say it was a huge mark on the campaign in terms of how it turned everything for us.

Everyone knows the history of The Grinch. Even though this is a new version, you still have this shorthand that allows you to do simple billboards like this, right? It would be much harder to do something like this with an unknown IP.
Yeah, that's really insightful. [The first] Deadpool had an attitude and a distinct feel to it, and they owned it for the whole campaign. Maybe at first it was hard to wrap your head around, but it became the identity for them. I think that was an original one that worked really well.

But for the most part, especially in an animated space, it would have been incredibly challenging to introduce a new character who—curmudgeon's not the right word, but who has this curmudgeon feel to it—it would have been really hard for us to write lines like this or have a campaign like this. You have to have some serious backstory of understanding why they are that way. With the Grinch, you have that—from having previous installments, from having the book, from having this incredibly long history with this character. How the Grinch Stole Christmas—the word "stole" is in there. This is somebody who doesn't want you necessarily to be happy. His heart needs to grow. There's so many things you're aware of, that you can bring with you, when you start to see these lines. It opens up that ability to advertise it that way.

You guys must have been pretty happy with how the advertising performed, given how well the movie has done.
I can tell you I'm thrilled with the performance—and the longevity of the performance. In our fifth weekend this past weekend, we were competing for No. 1. That would have probably been historic, in your fifth week to come back and be No. 1. So yeah, I would say everybody here is thrilled with where we are. It feels like the campaign has sustained, and we continue to do TV spots. Other advertising is still going because we're rounding the corner now into Christmas, which is a major theme of the movie. It feels and looks like success for us. Internally, from the meetings I've been in, and externally, it feels good.

See more images from the campaign below, including one fun execution from L.A. where the Grinch appears to be stealing one of the billboards. 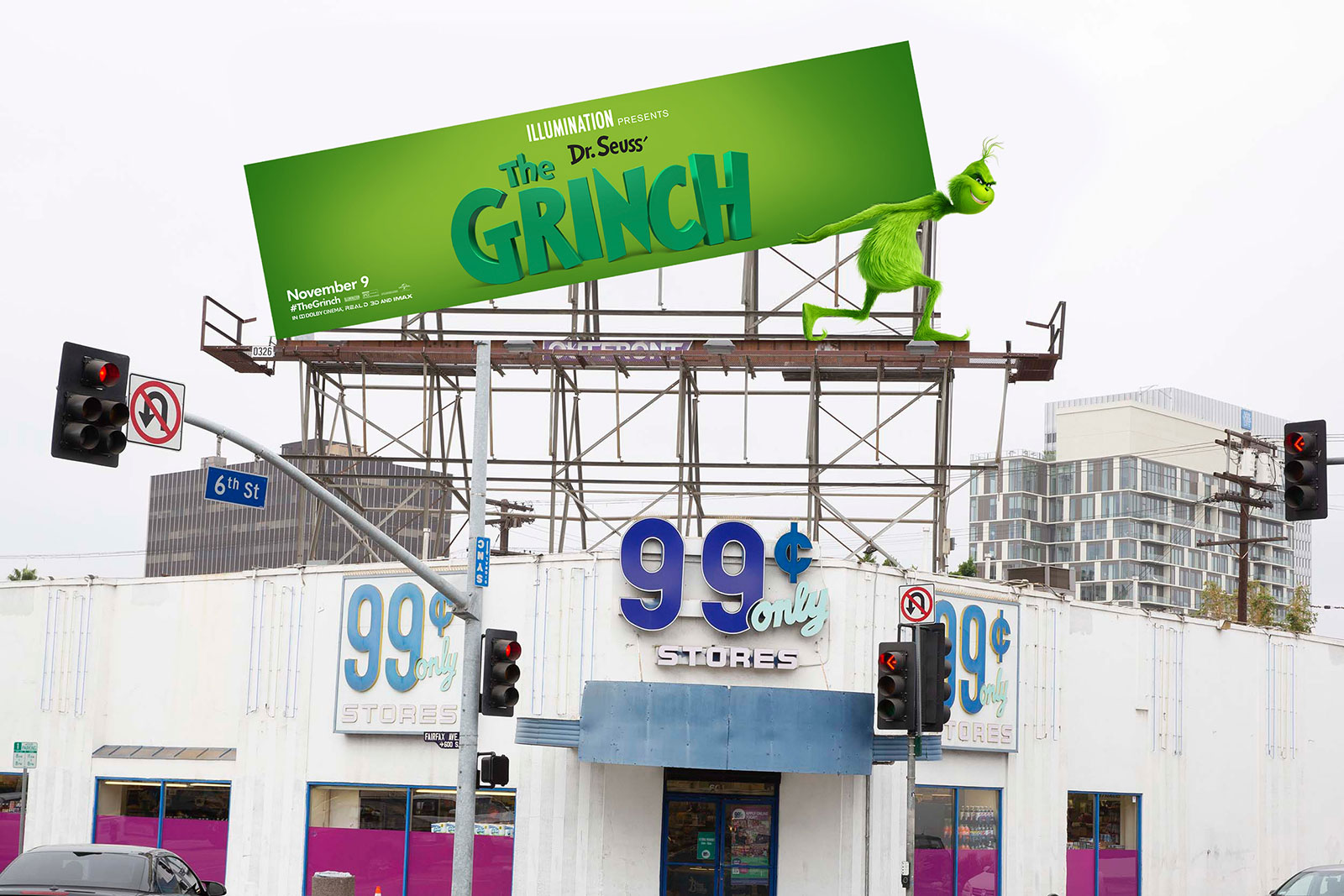 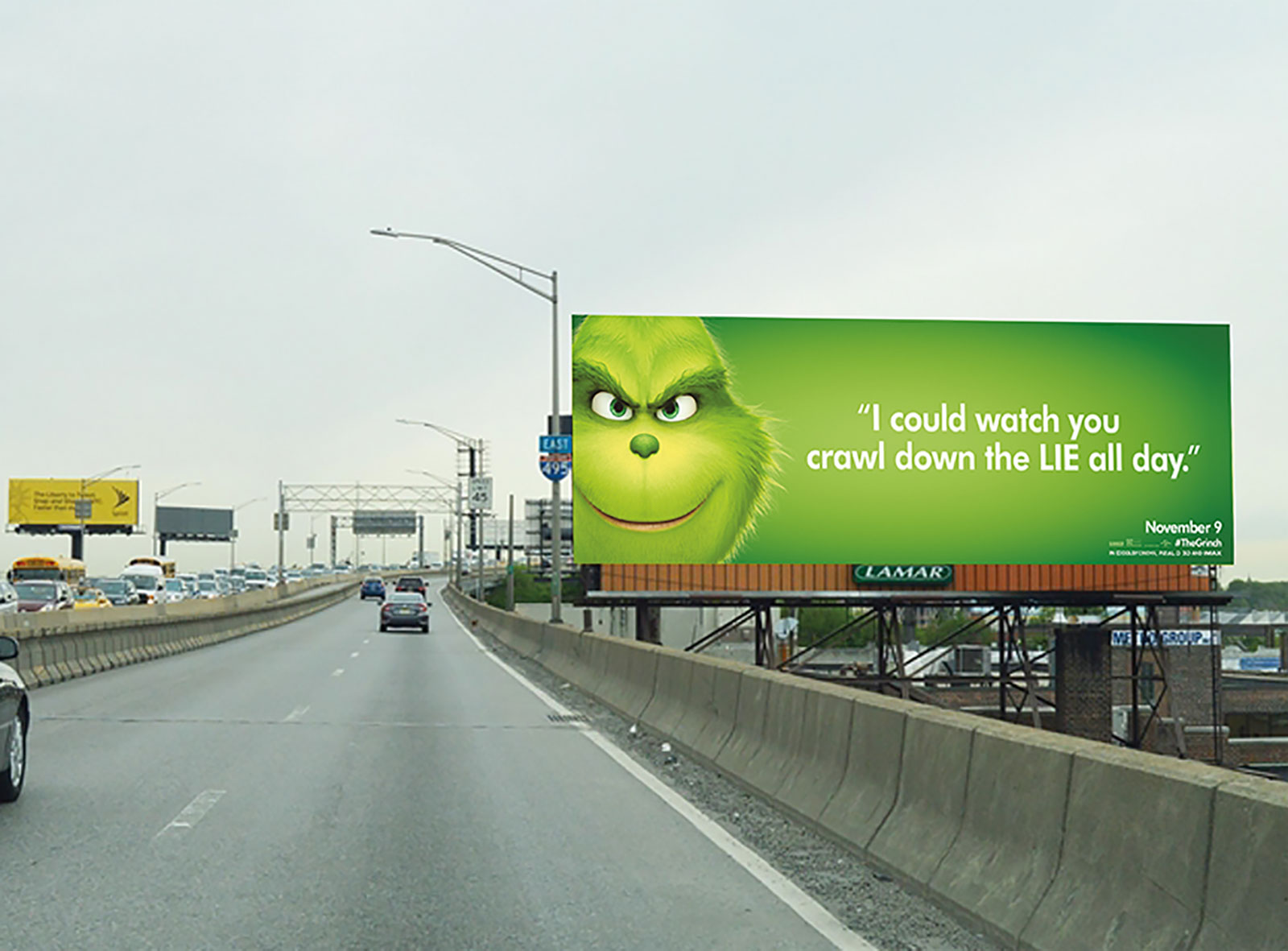 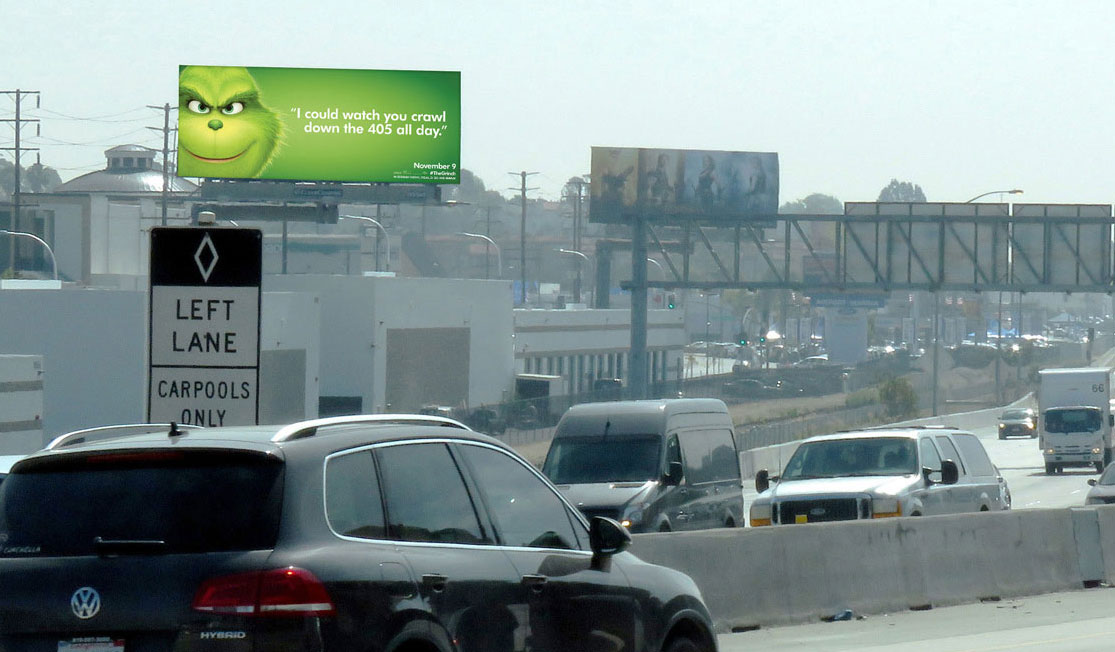 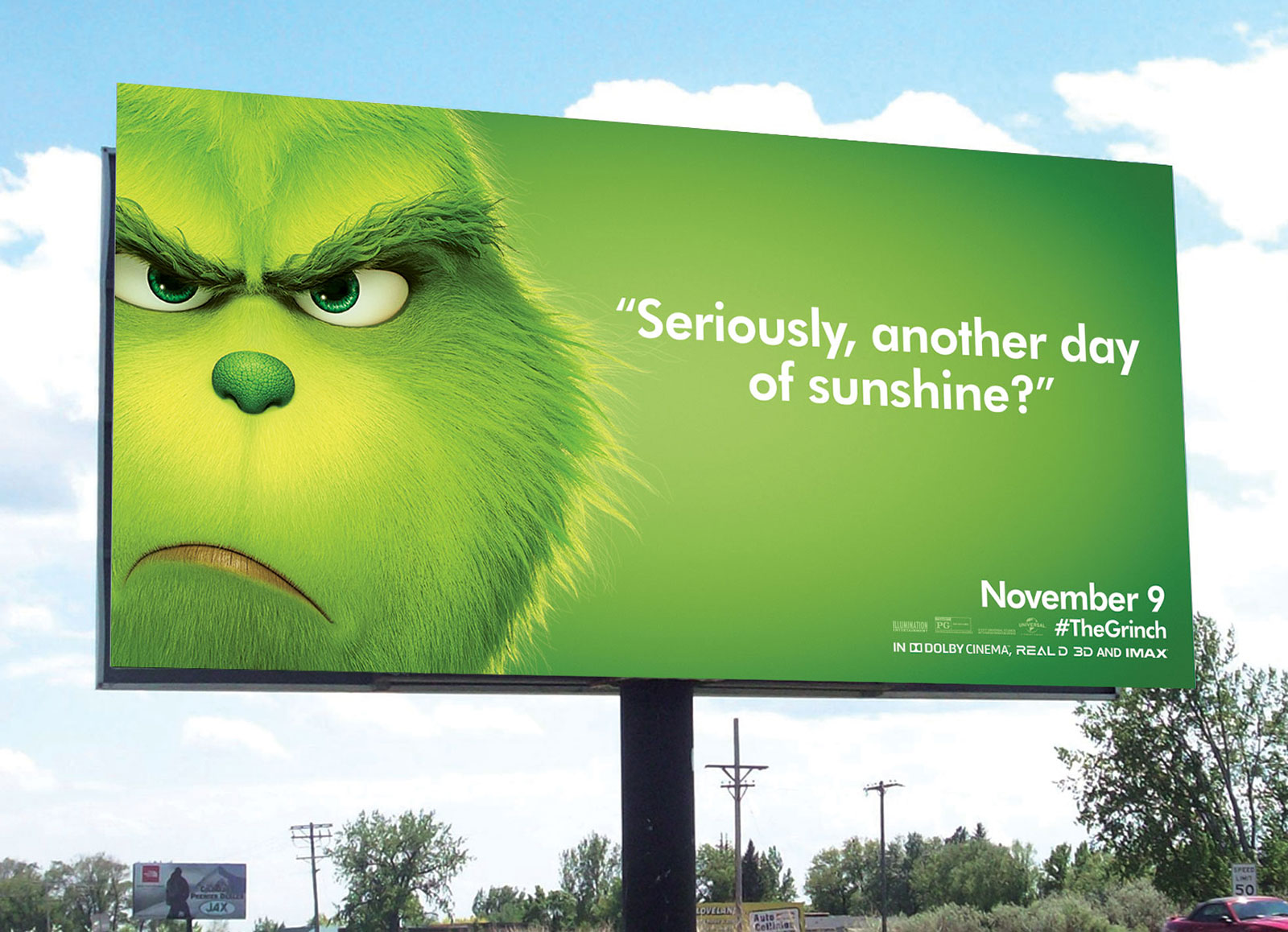 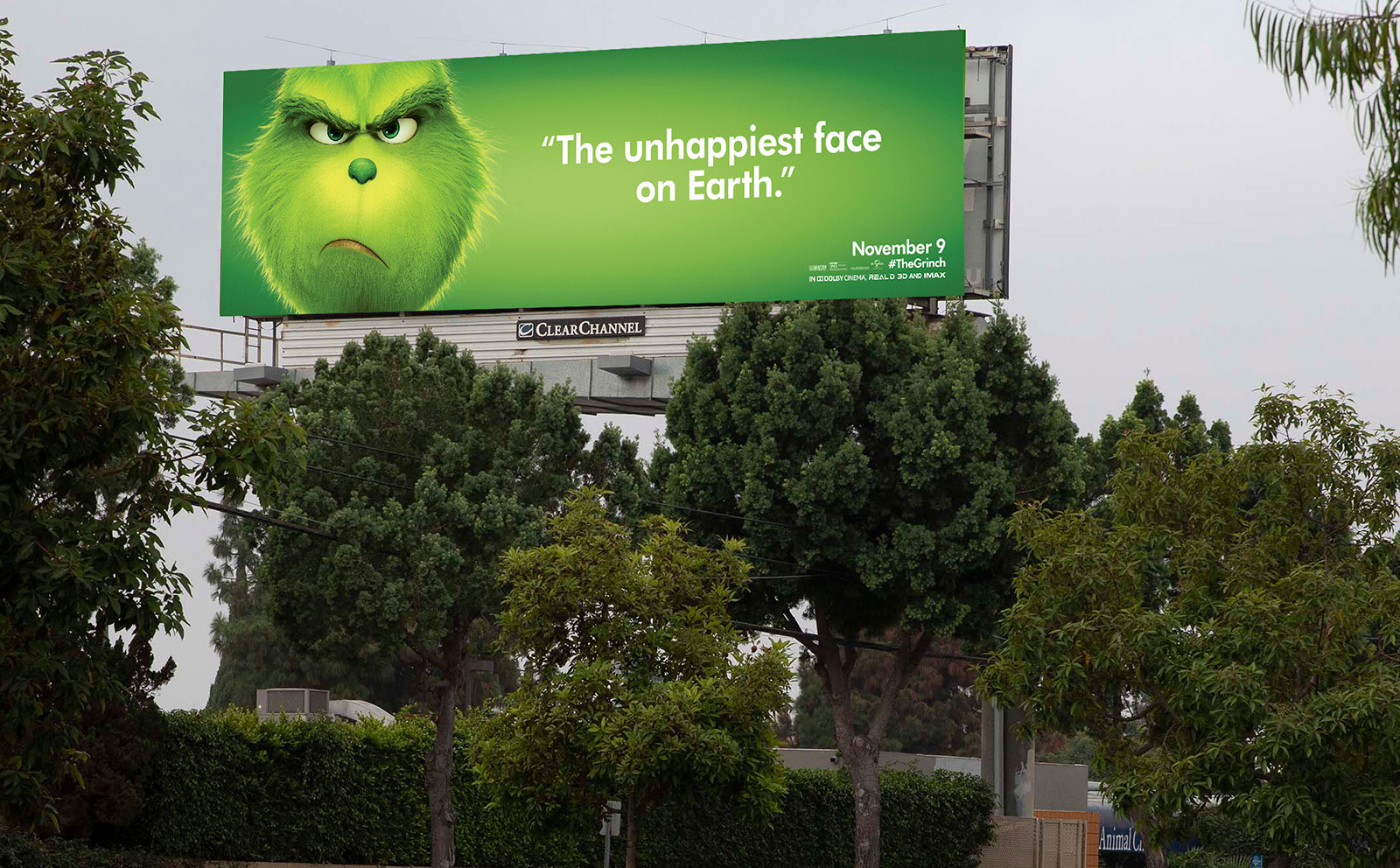 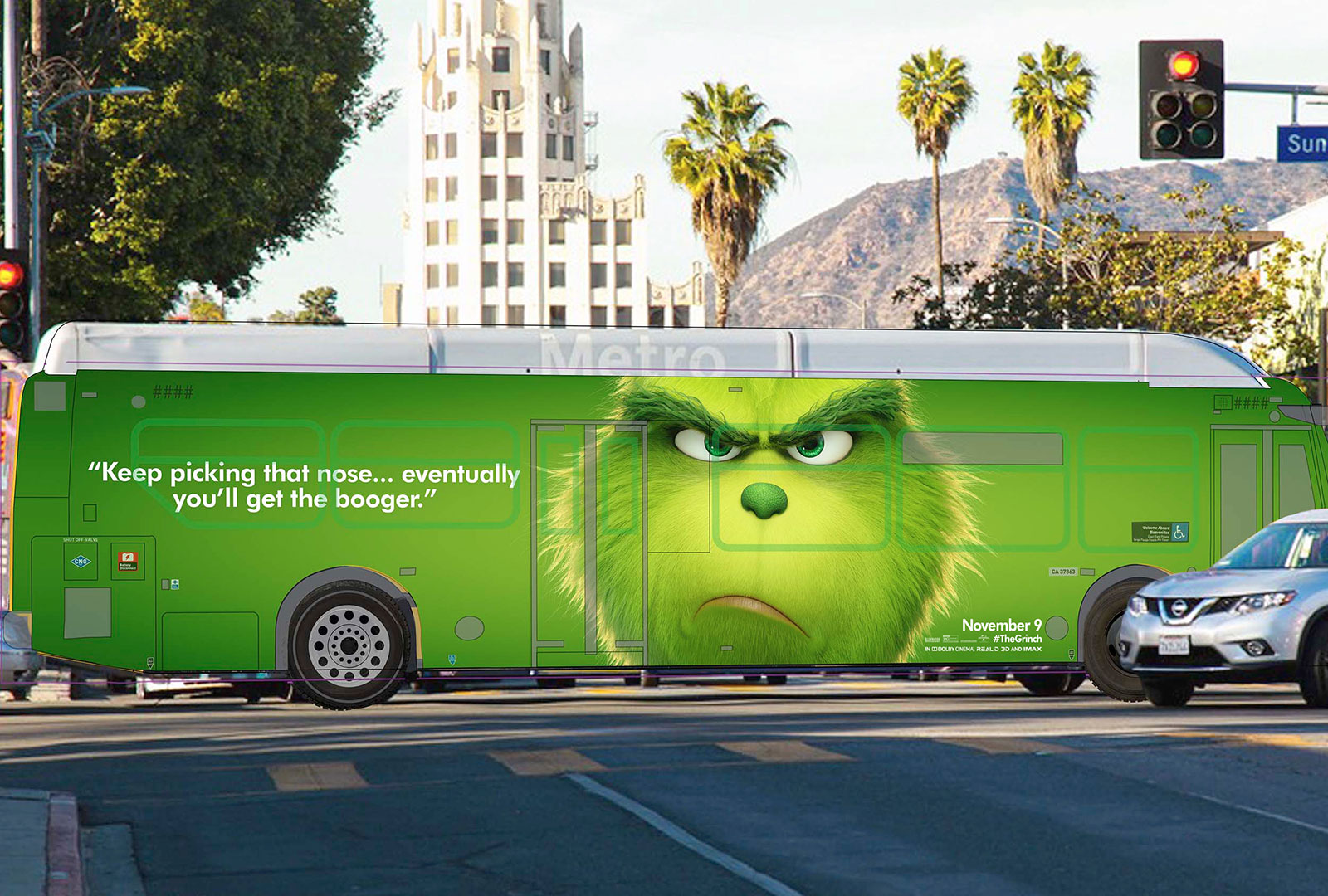 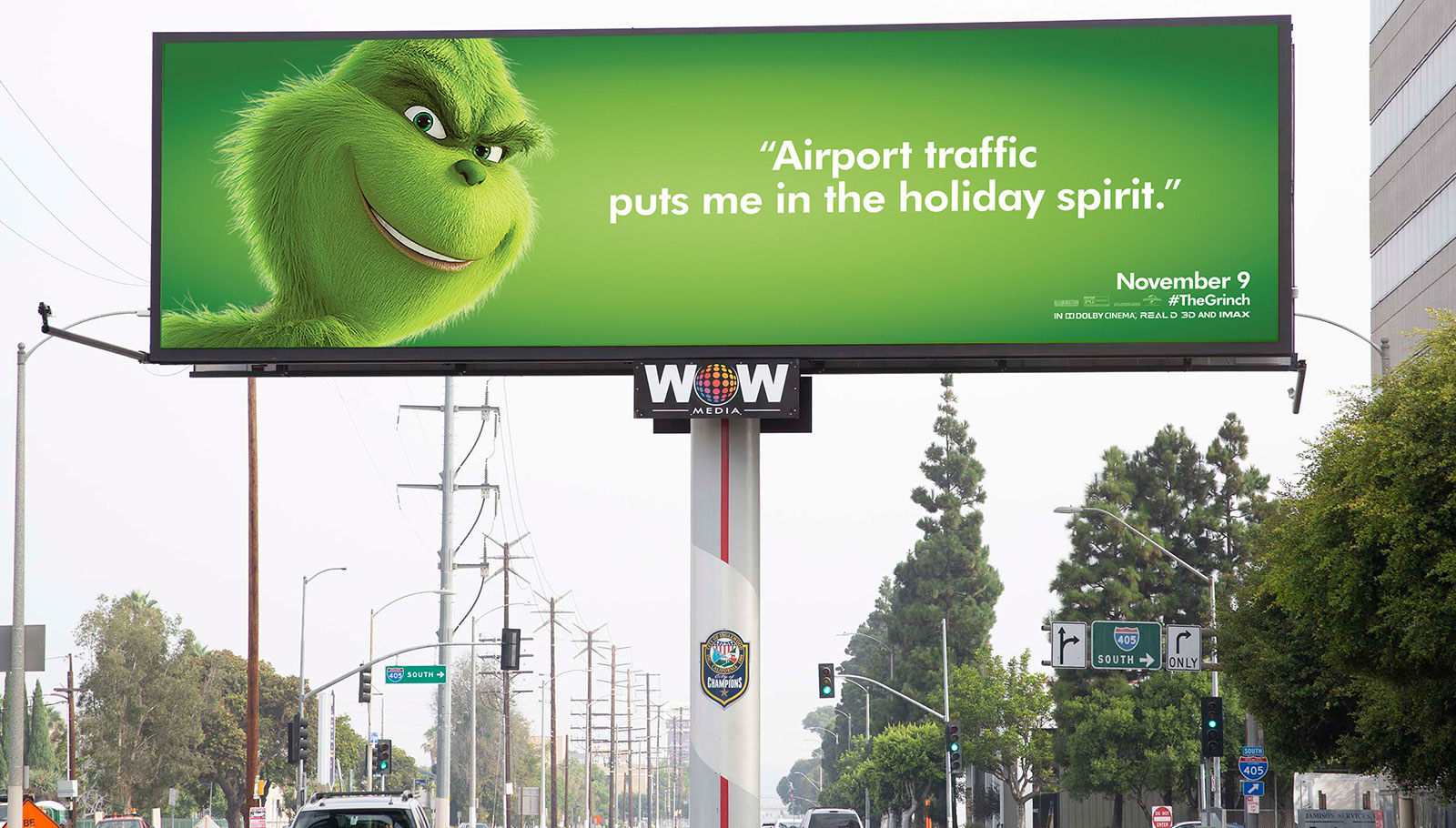 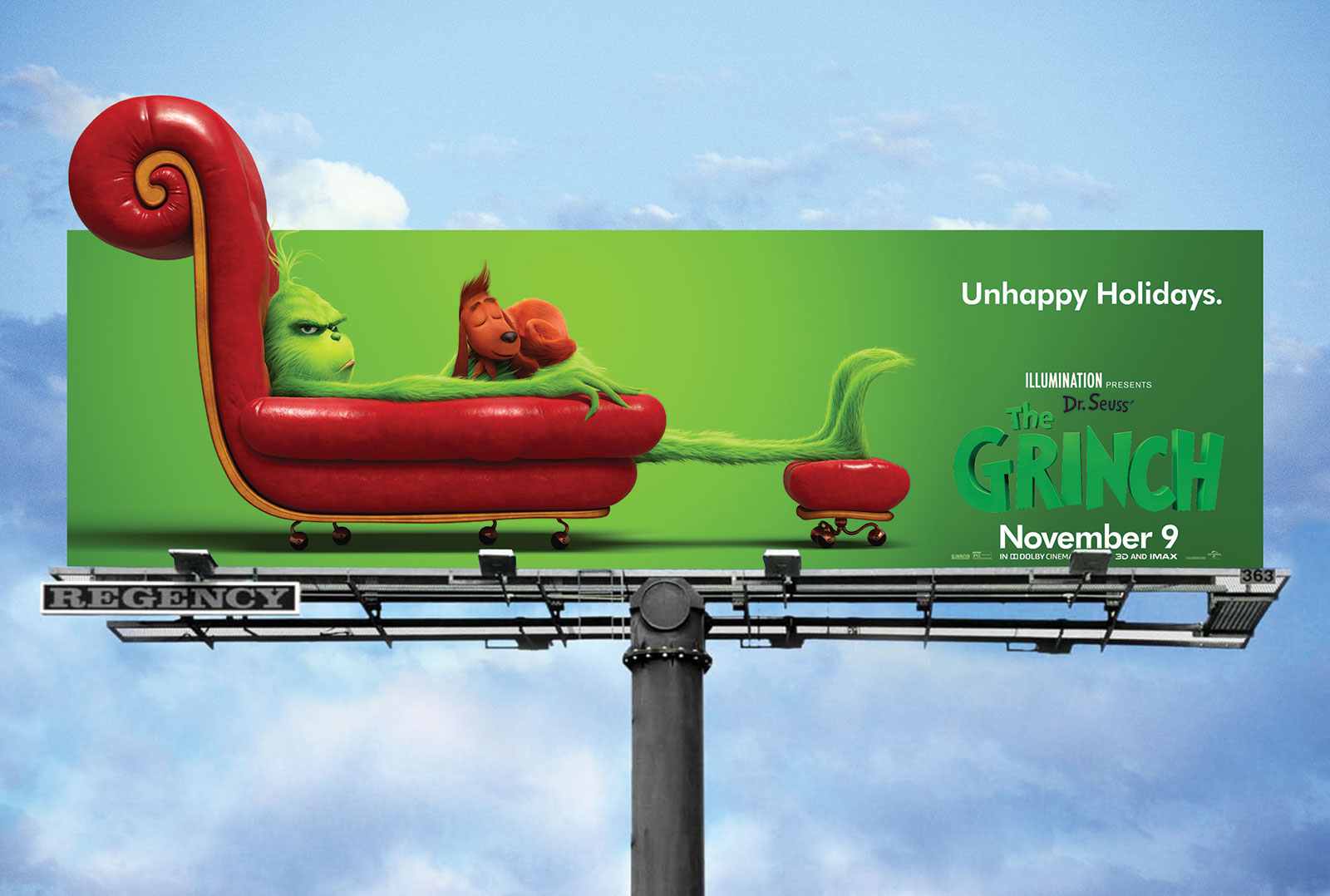 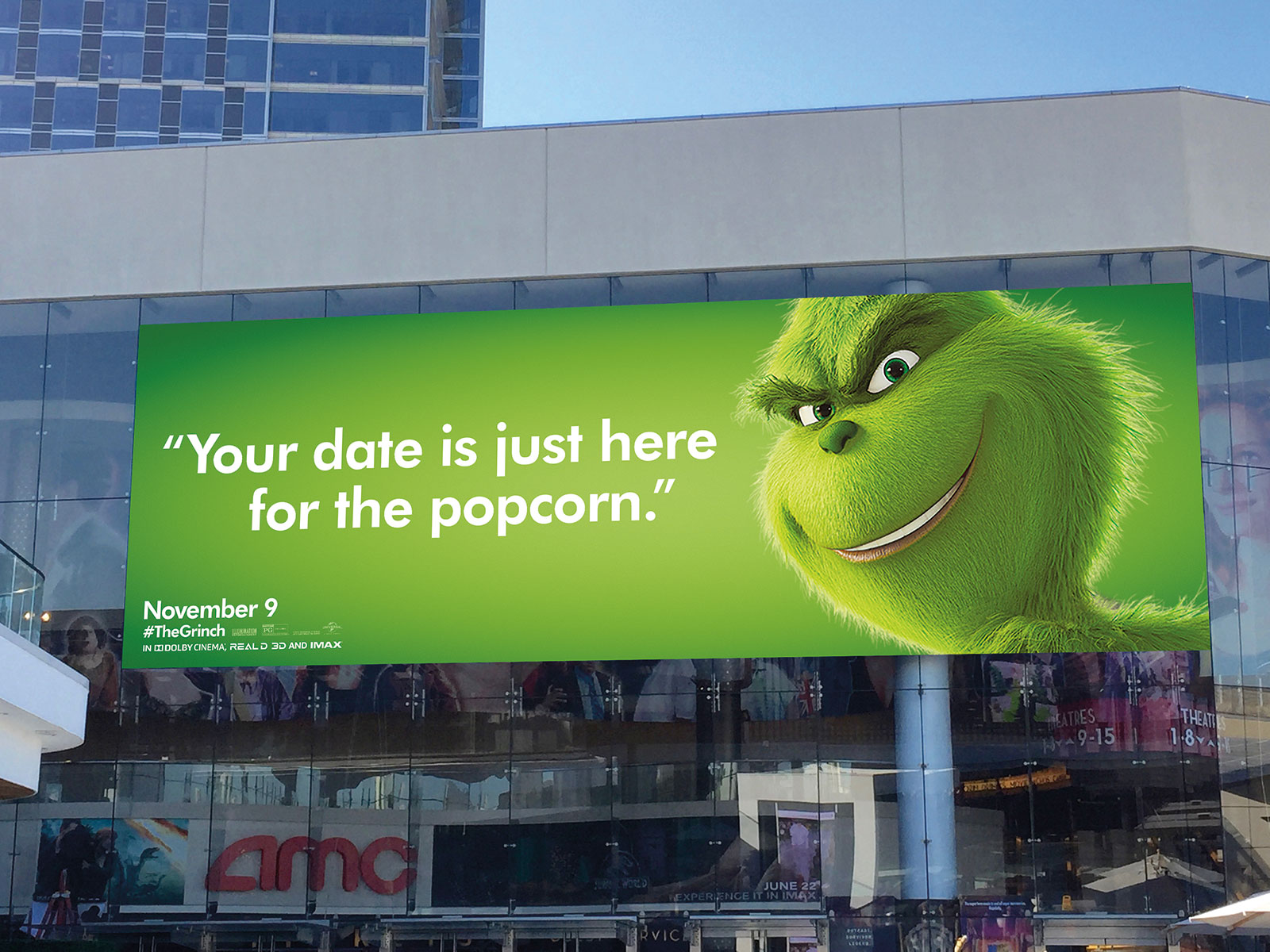 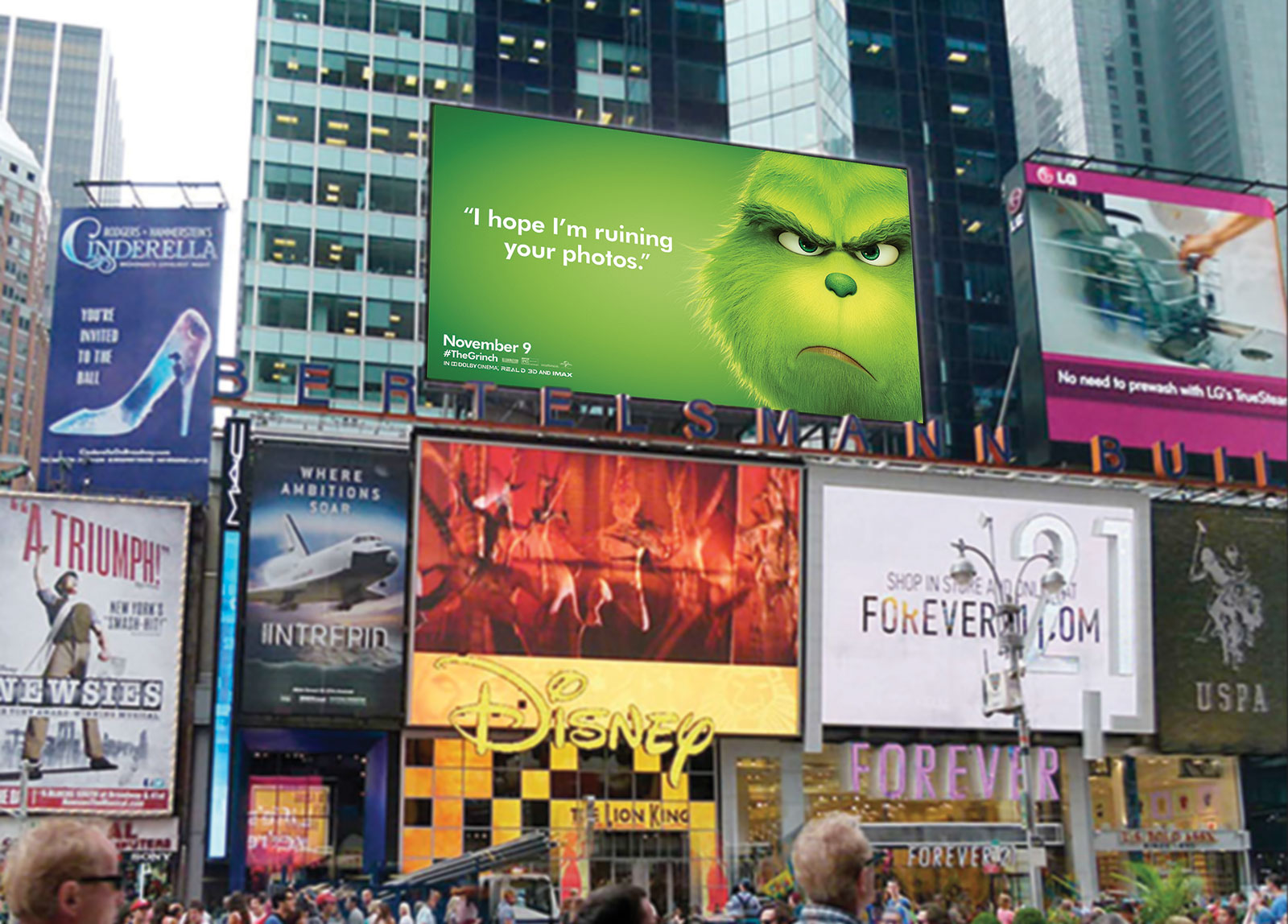