Inside 'Purge City,' the Twisted Pop-Up Shop That Electrified Comic-Con

At USA/Syfy's buzzy activation, the devil was in the details

What if the unsettling scenario of The Purge were actually real? What if, once a year, all crime was legal for a 12-hour period—vandalism, theft, arson, murder? How would you prepare for such a night of mayhem?

Well, in good old capitalist America—even under a new totalitarian government—you'd need a supply store. A party supply store, so you could have a little fun on this twisted annual holiday, just as you used to do on the Fourth of July. Make it an all-night party, even if the games are mostly about killing, or trying to survive.

Working with experiential agency Campfire, the NBCUniversal networks opened a wonderful, painstakingly outfitted pop-up shop called Purge City—modeled pretty blatantly after Party City (down to the cartoony, multicolored store logo)—to promote the upcoming TV version of The Purge, based on the horror films of the same name.

Like a Halloween shop, Purge City had everything you might need to celebrate the peculiar ritual of the Purge. Hats, T-shirts, masks, mugs. Bumper magnets. Greeting cards. Splatter-proof ponchos. "Purge Away" detergent. Razor wire. Duct tape. Candles that burn for 12 hours. Blue baptisia leis (more on those later).

Visitors got 20 "Purge dollars" each to buy some of the merch on display. 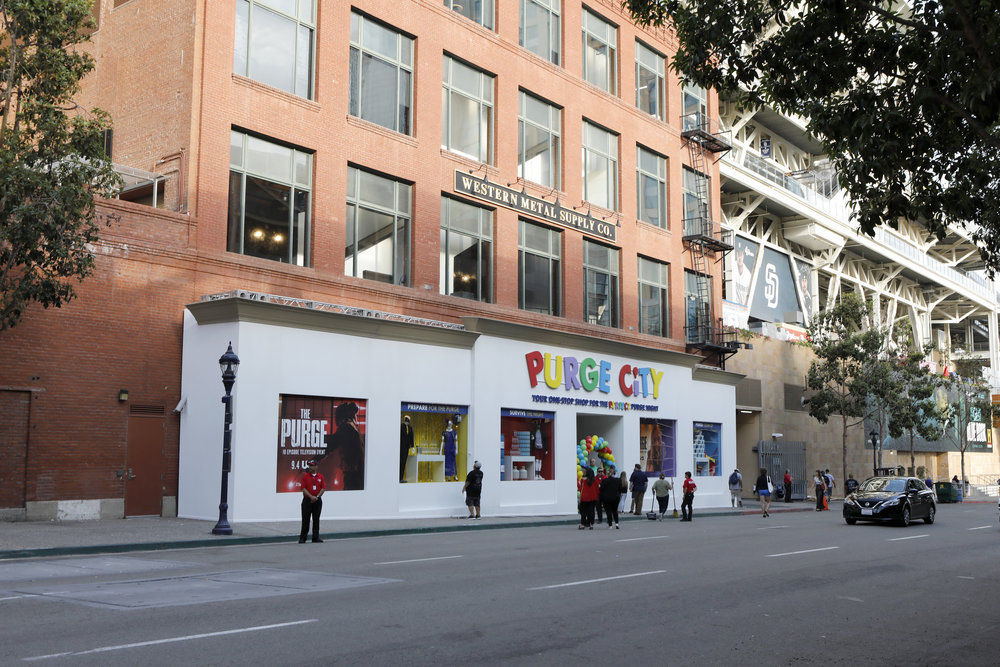 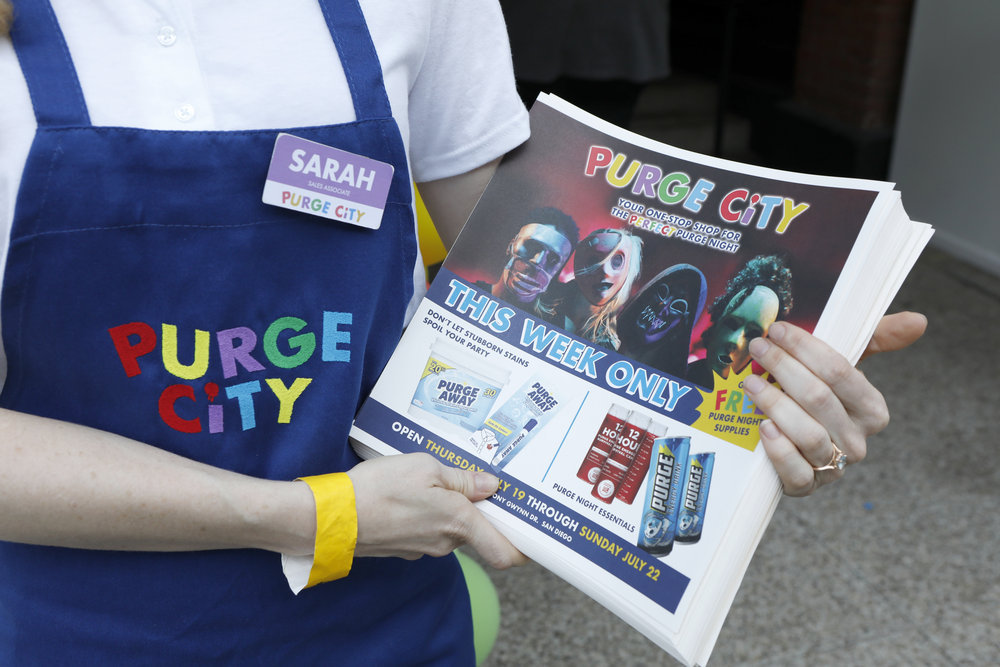 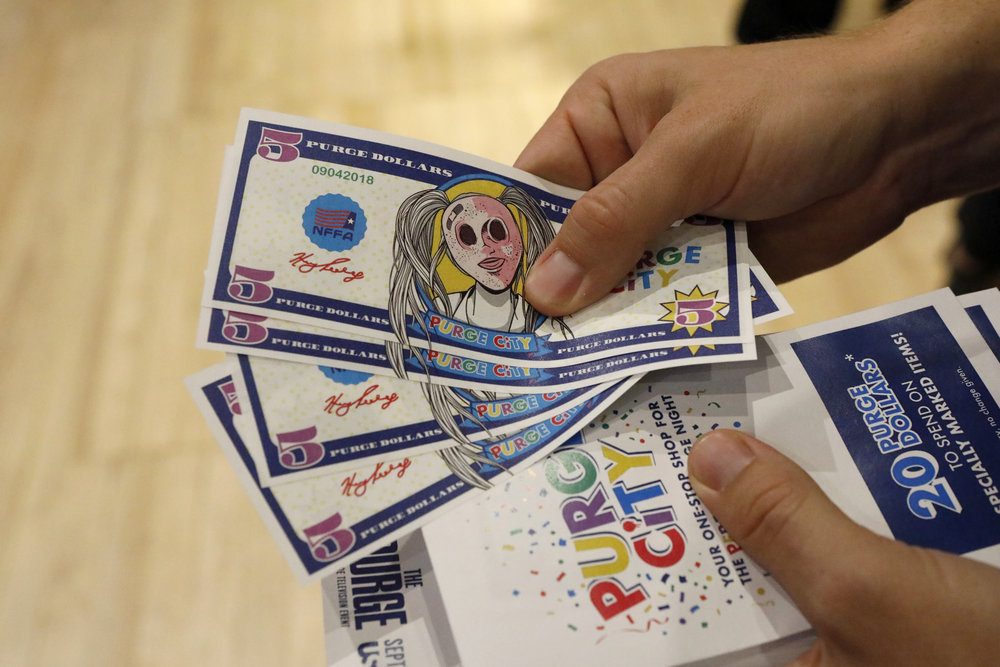 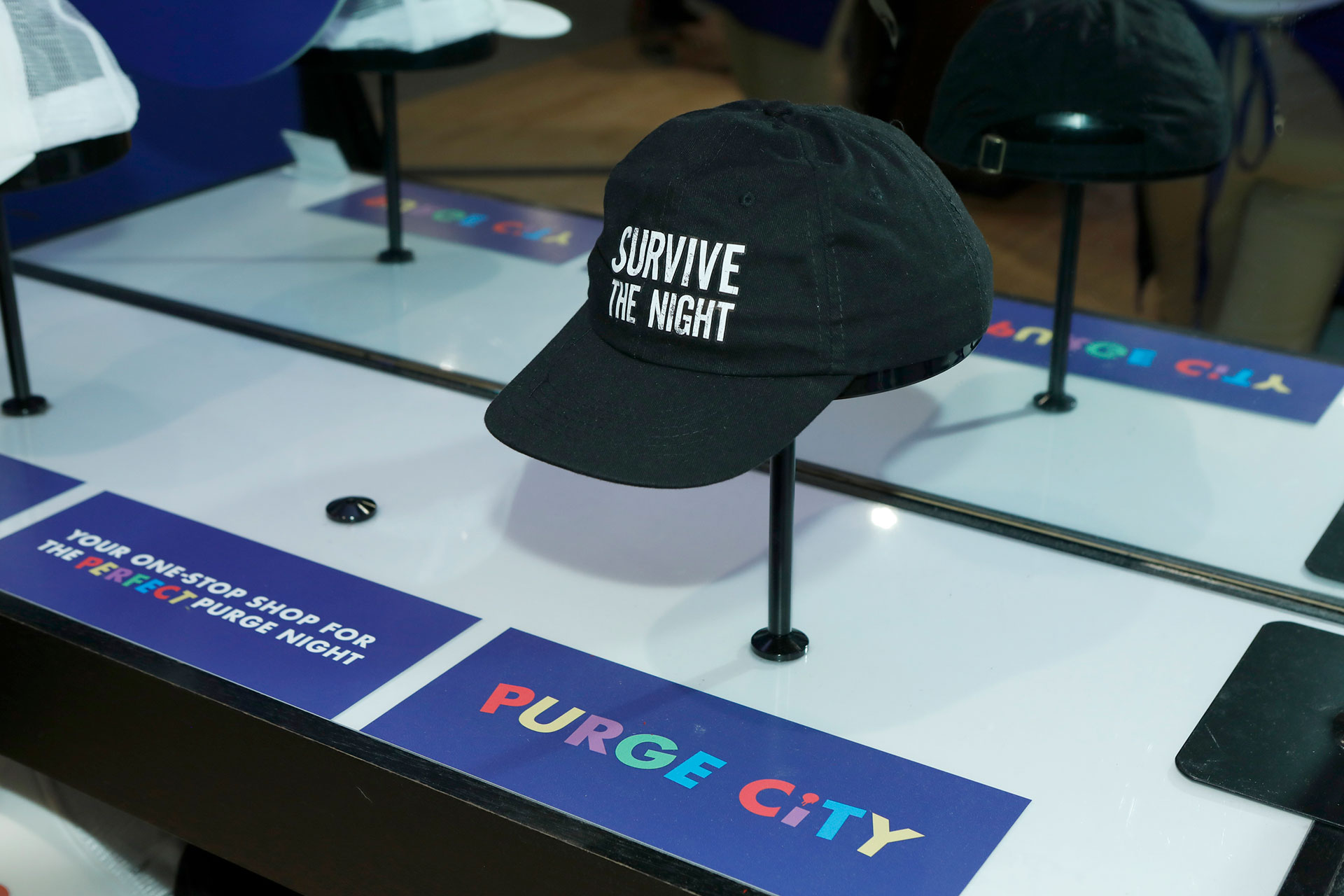 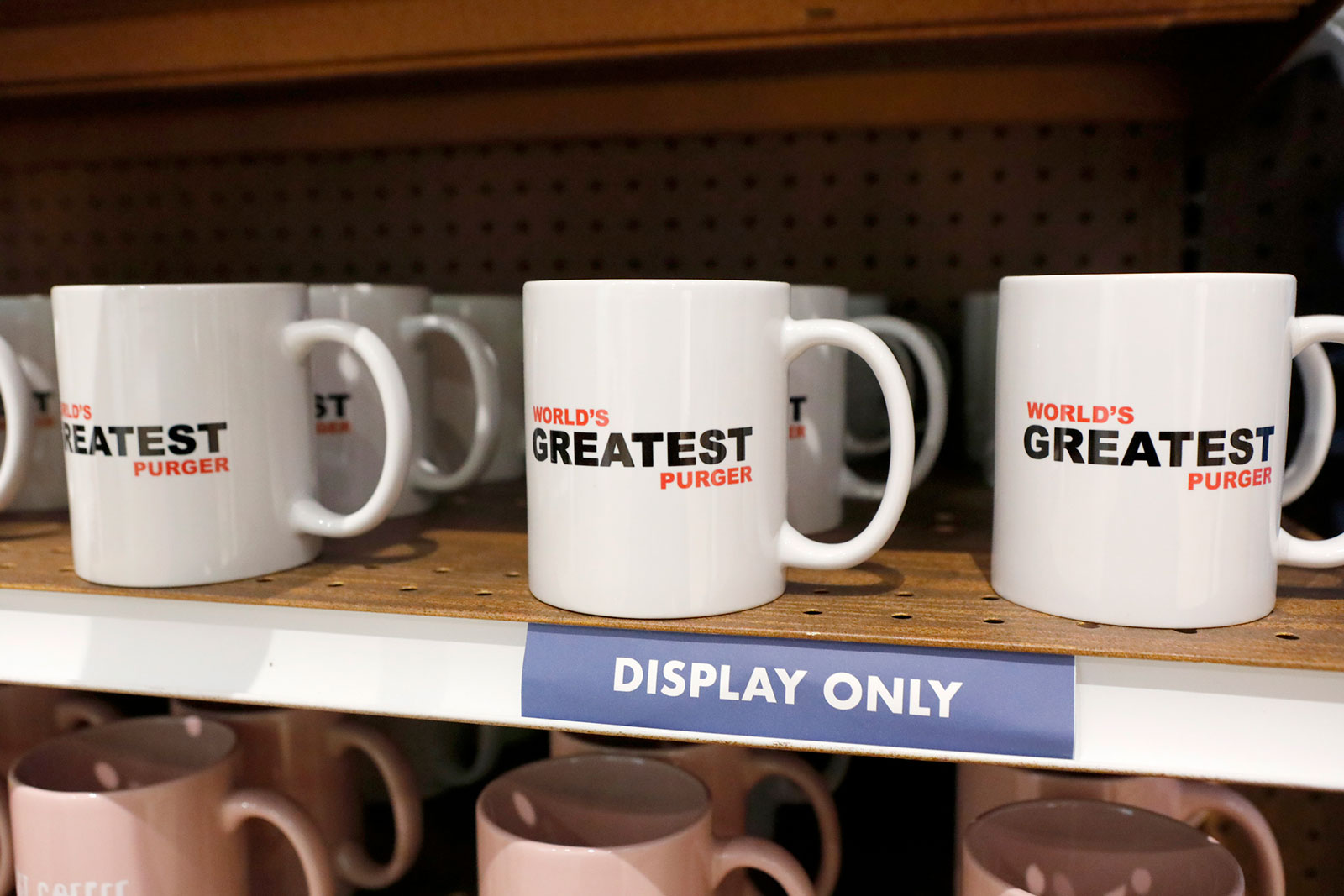 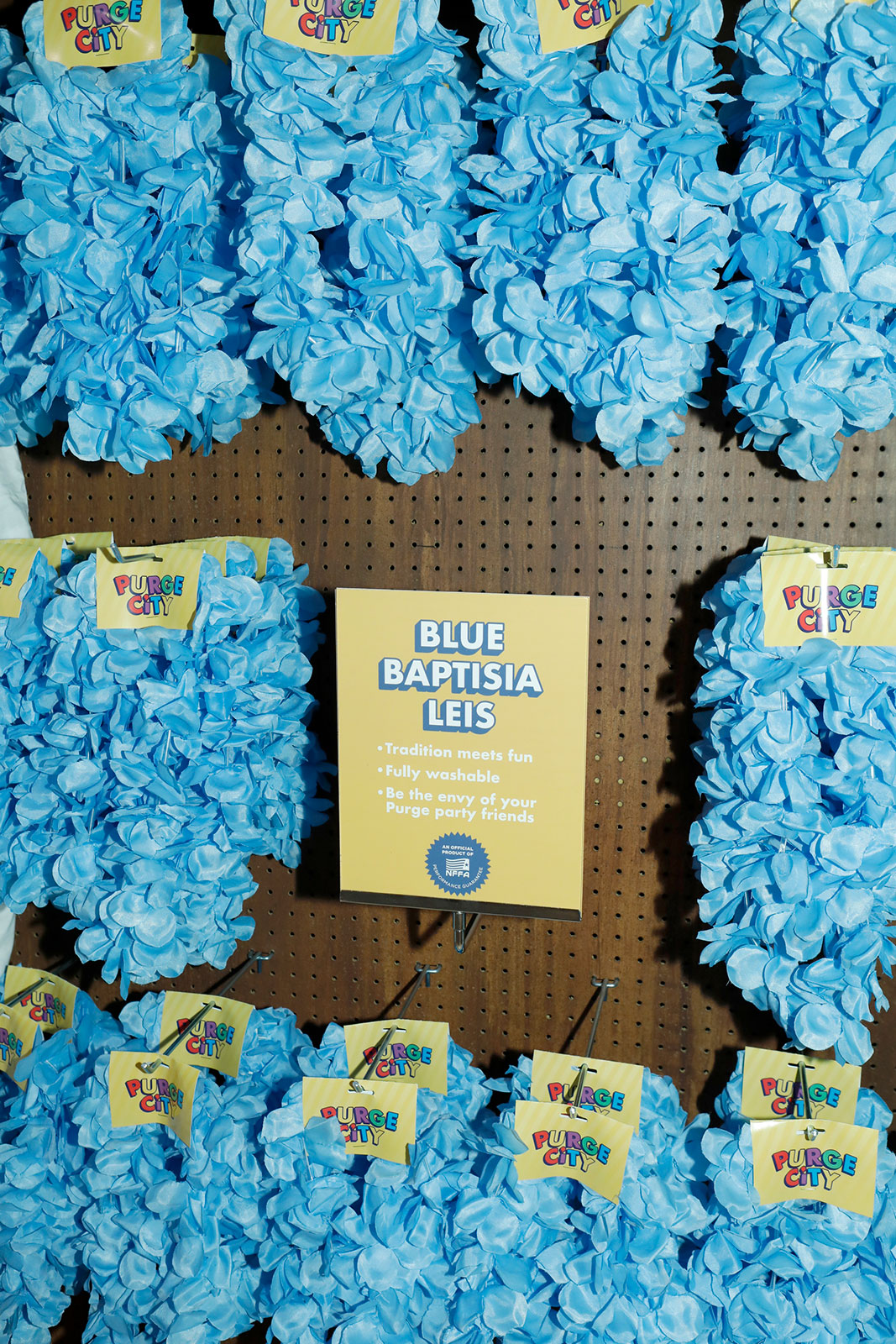 Purge City, which was open Thursday through Sunday at 215 Tony Gwynn Dr. in San Diego, turned out to be one of the buzziest activations at the convention. This was largely due to the staggering detail of the world-building on display—something both the networks and the agency told Muse was critical to pulling it off right.

The initiated and the uninitiated

"From the beginning, we had this idea of creating a retail store and were strategically thinking about how this immersive experience would work," said Colleen Mohan, svp of brand marketing at USA & Syfy.

The networks wanted to create two "lanes" within the store, Mohan said, one for the initiated and one for the uninitiated.

"The initiated are those people who know the franchise inside and out, and already are inherent fans," she said. "We had to make sure the level of experience, how deep they could go, existed in the store. Then you have the uninitiated, who maybe have never heard of The Purge and aren't even familiar with the outlandish concept of Purge Night. We had to think about how quickly we could bring them into this world. All of the detail went into these various layers of what they could experience."

Mike Monello, founder and creative director at Campfire, said the agency spent endless hours crafting the broad range of products to give fans an experience that was faithful and believable.

"We use this phrase, 'Think like a forger,'" he told Muse. "When you're world-building the way Purge City world-builds, you have to pay attention to the details because it's those details that create that sense of immersion. It can't just be a surface emulation, or else it rings false."

The greeting cards, for example. There were more than 40 of them—a rich variety that mirrored the range of greeting cards for any holiday in the real world.

"It's not just one or two cards, which would be easy and cheap to replicate," Monello said. "I loved seeing them all together on the shelf. That's where you go, 'Whoa, there's a whole culture here.' The world allows you to lose yourself in it." 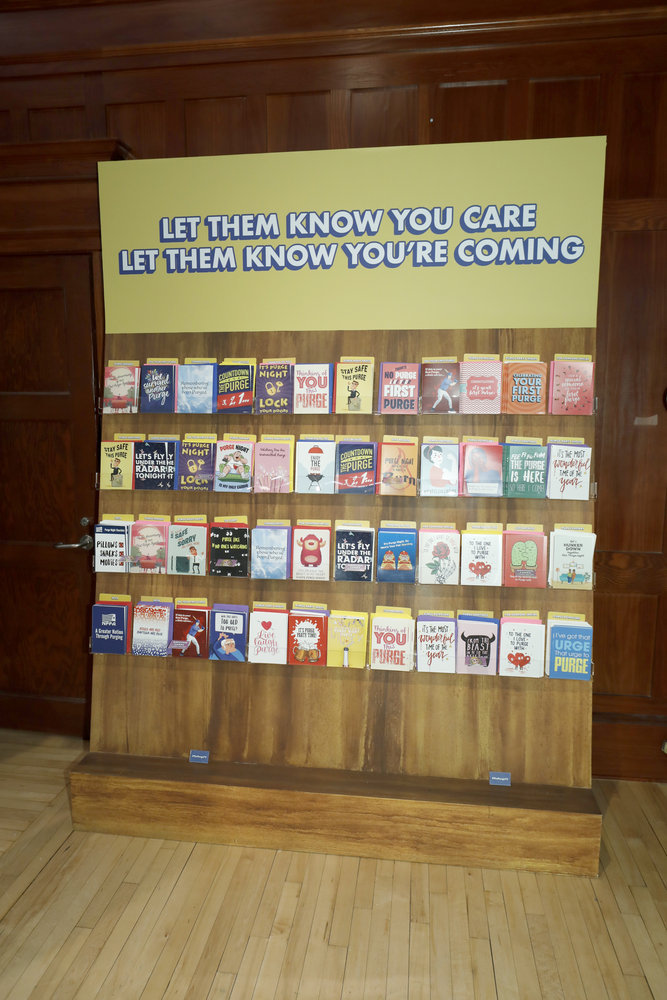 The bumper magnets were another favorite of Monello's. 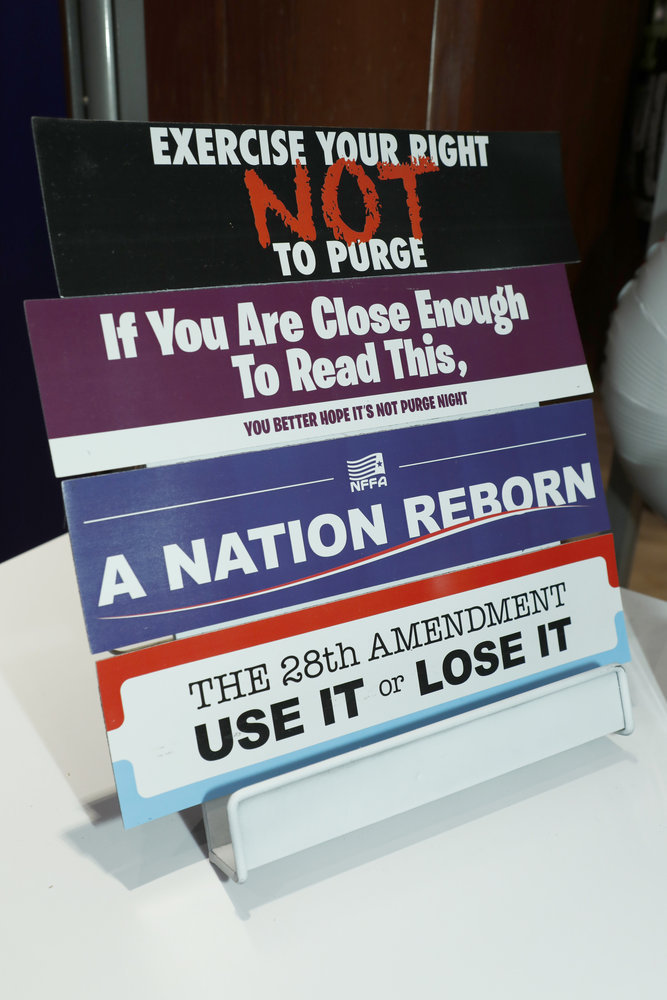 USA/SyFy worked with Blumhouse Productions (the production company behind the films and the show) to make sure every piece of content fit the narrative of the property.

"We had live demos," said Mohan. "We had 12 party planners who were all actors and stayed in character guiding people through the experience. Creating anything live is about making sure everybody is staying in-world and on message."

Fans quickly know whether the people who put together an activation understand the property or not, added Monello.

"They live and breathe it through their fandom," he said. "Things like the blue baptisia seeds goes fairly deep. If you watch the movies and the series, you'll see that the flowers are certainly important to the story world. But having the seeds there, and the copy on the seeds, really communicates to the fans that this was put together by people who love the property and love the story world."

Leaning into the satire

The Purge is undoubtedly a horror franchise. But there's also a strong satirical element to it. After all, the premise of a world spinning out of control, where the government stokes people's worst instincts, can feel uncomfortably close to today's reality. In its fully realized vision of the commercialization of such a society—what a store built around its key holiday would actually look like—Purge City went beyond cheap shocks and into more psychologically rich territory.

"If you're at San Diego Comic-Con and someone said to you, 'Oh, there's a Purge activation,' your head would probably go to some kind of haunted, scary thing—something that's going to provide jump-scares or action-adventure," says Monello. "That's certainly in the franchise, and fans know it. But that's the known part of the franchise. The satirical aspect of it has always been there, too. The challenge was to bring out the satire but in a way that goes a little bit deeper and makes people think about the world that's going to be explored in the series."

This focus on satire, rather than horror, allowed Purge City to exhibit a more lighthearted, Idiocracy-style vibe.

"We didn't set out to bring levity, but we did set out to create a marketing experience that maps that same over-the-top nature that exists in the Purge franchise," says Mohan. "The show sits in the world of satire, and we have our marketing meet it on that same level." 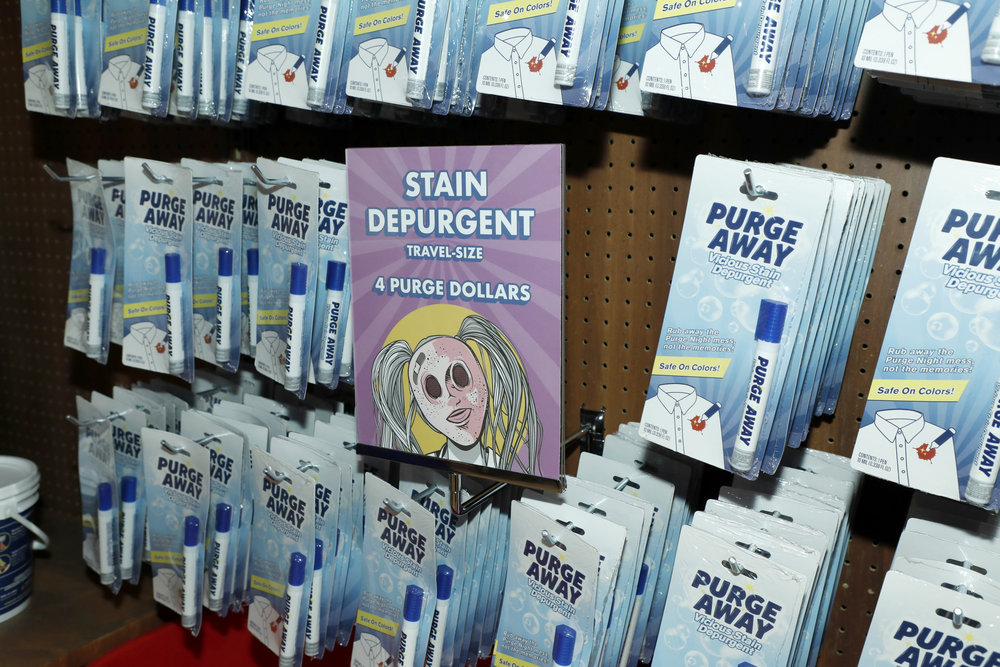 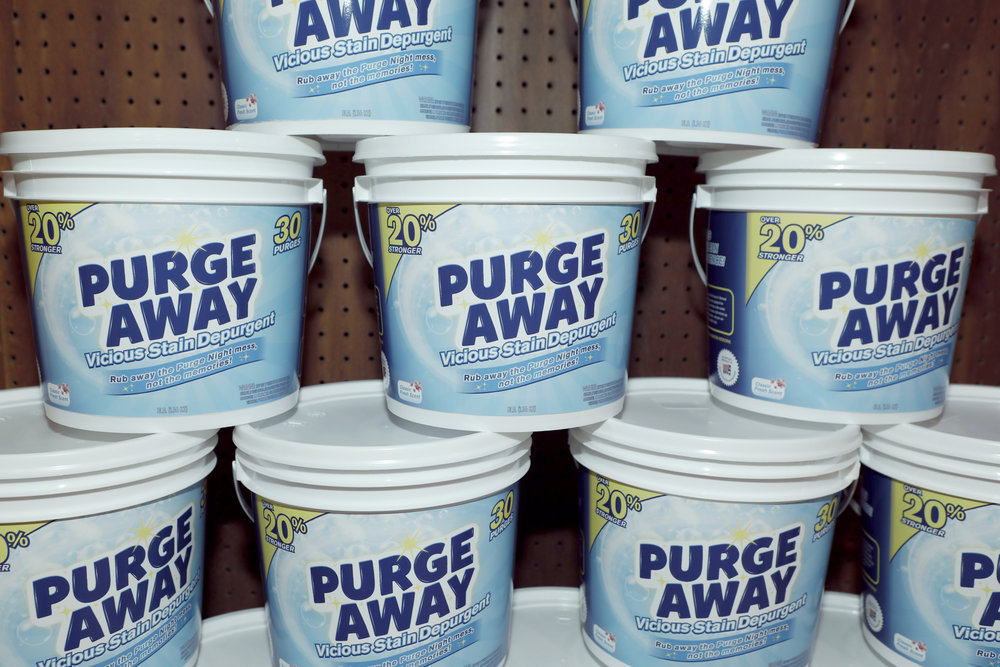 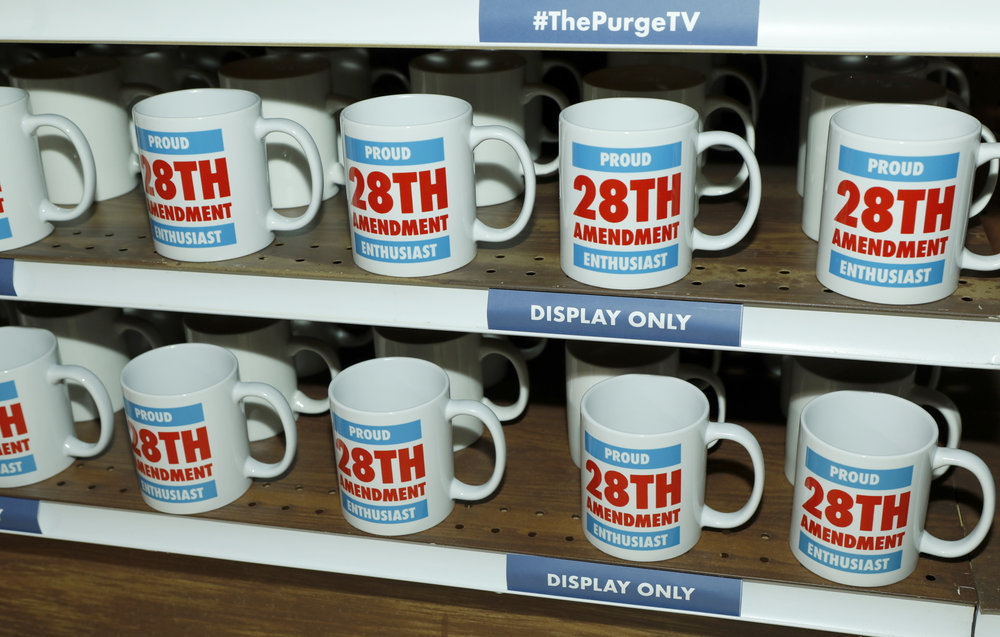 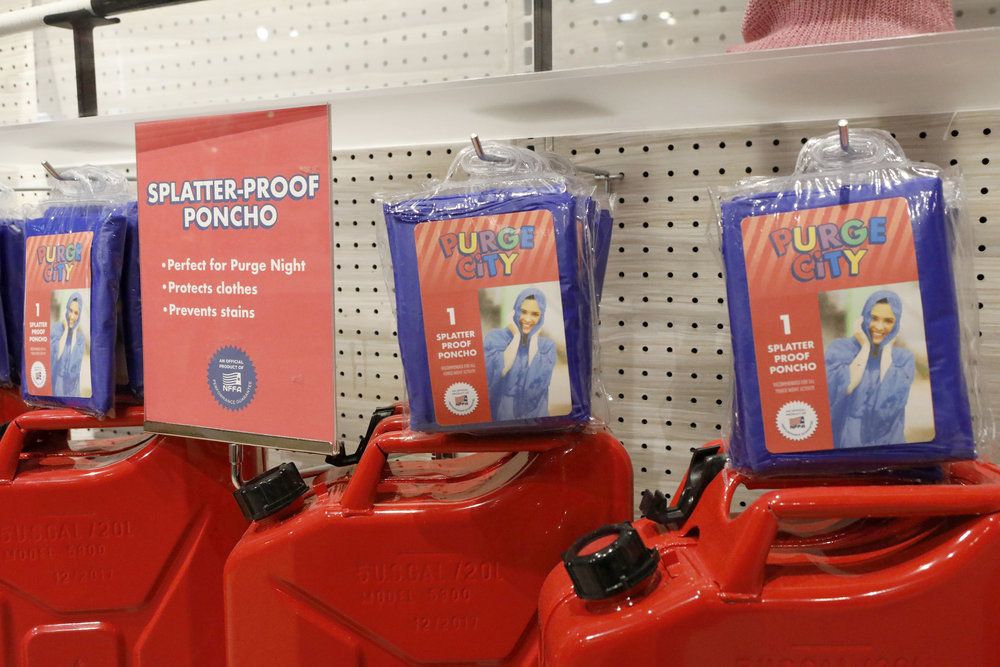 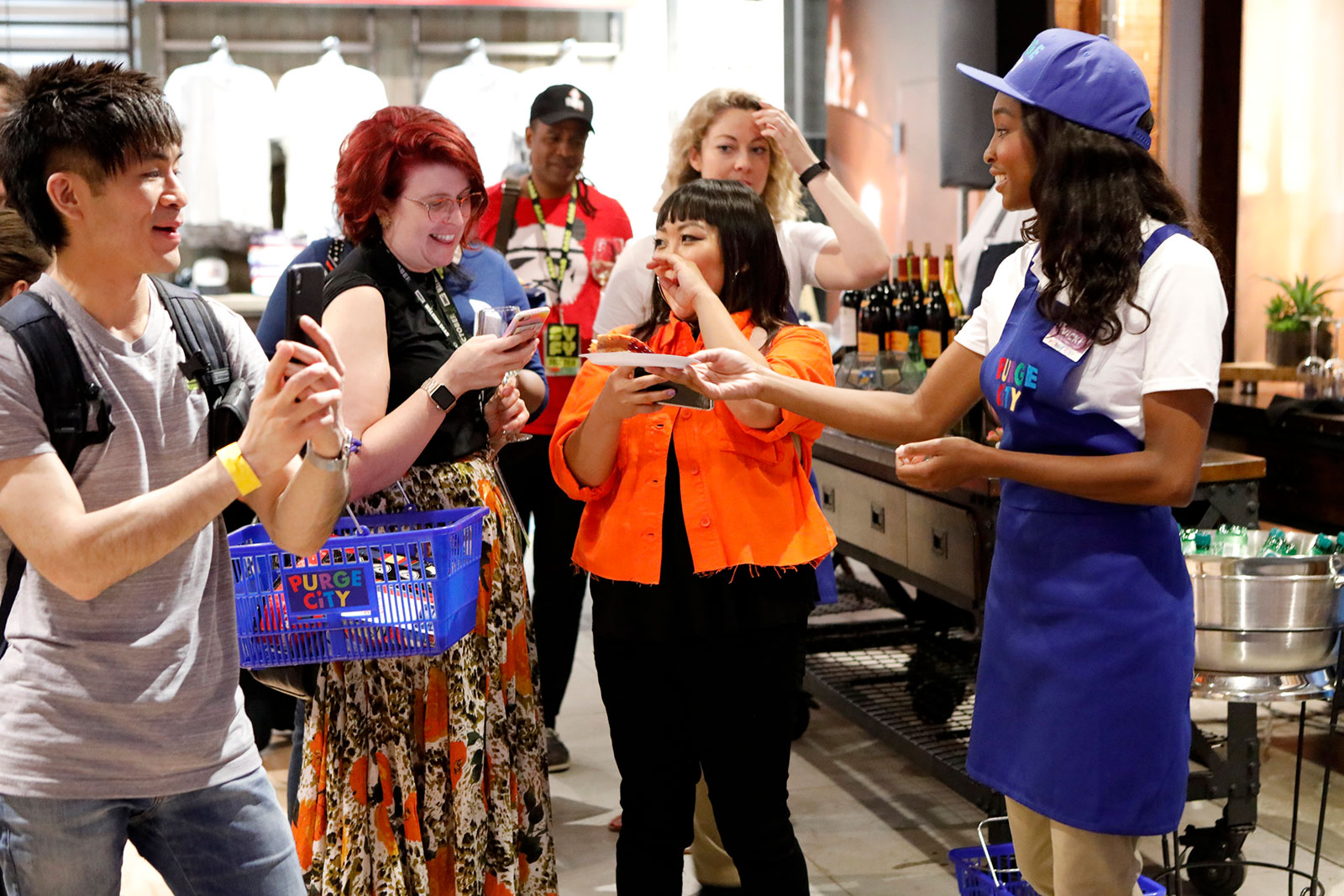 Monello—who made his name as one of the producers of The Blair Witch Project back in the '90s—added that while horror might have particularly devoted fans, it's far from the only genre that can generate compelling real-world activations.

"I don't think it's genre-specific," he said. "Even pre-internet, horror and sci-fi fans were always kind of a codified subculture. It was easy to point to those fan communities. But if you look at the culture at large and at immersive theater—a lot of the activations this year at Comic-Con were not horror or sci-fi but were action or were sitcoms. When you're at a physical activation, the opportunity to bring fans into the world—and it's a world they know and love and watch—the opportunity to make it tangible is incredible. It's unique to an activation or an event like that, where you have a lot of people who really want to feel that world in a tangible way."

Here is the fantastic circular that advertised the place: 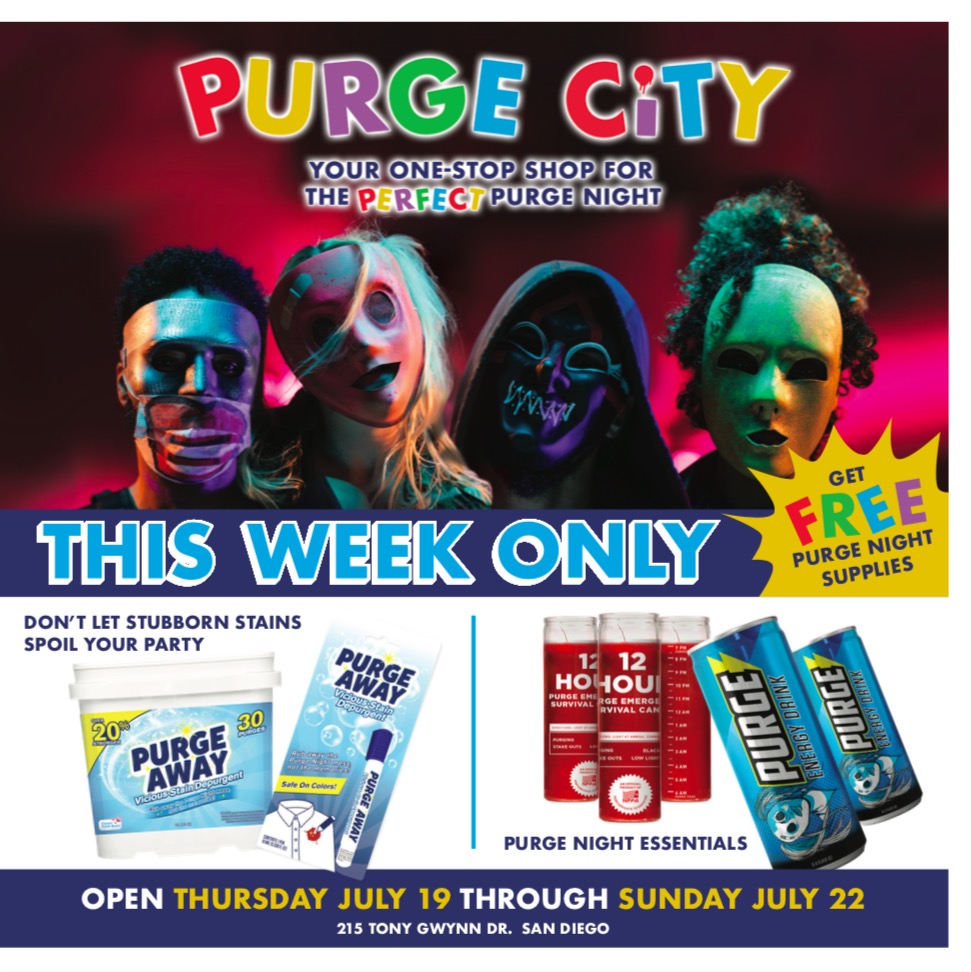 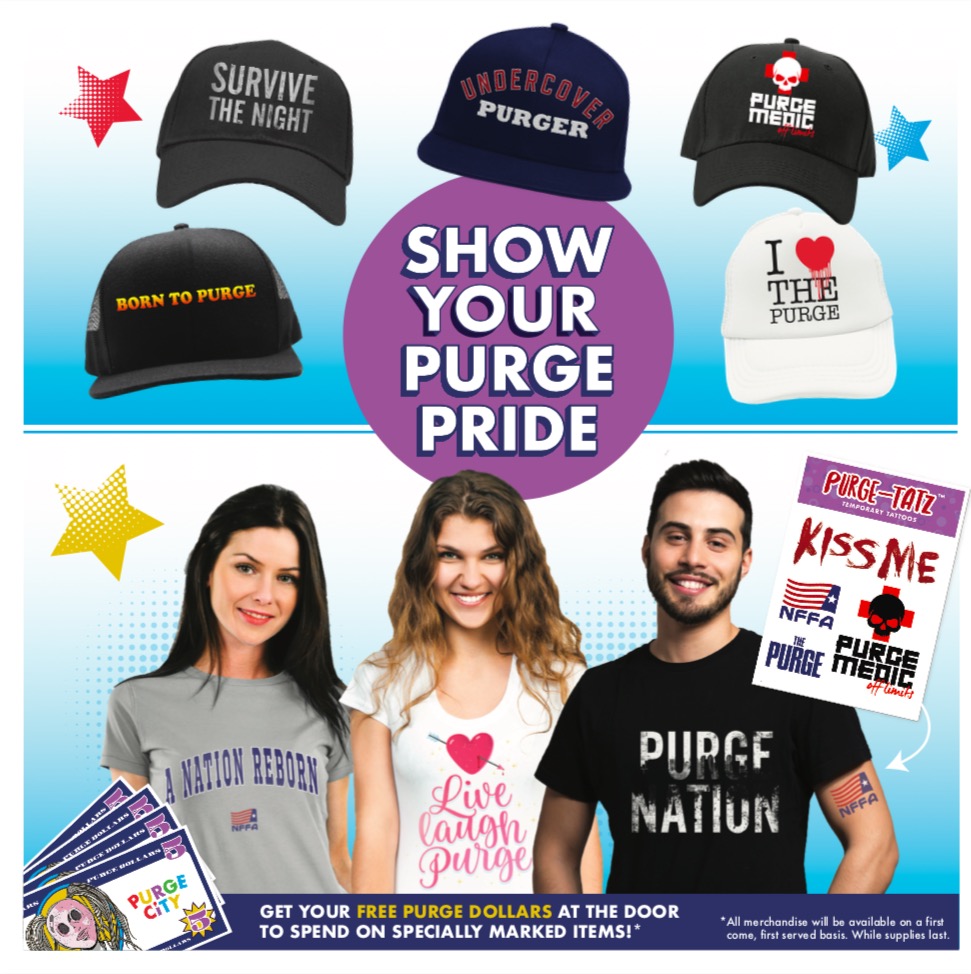 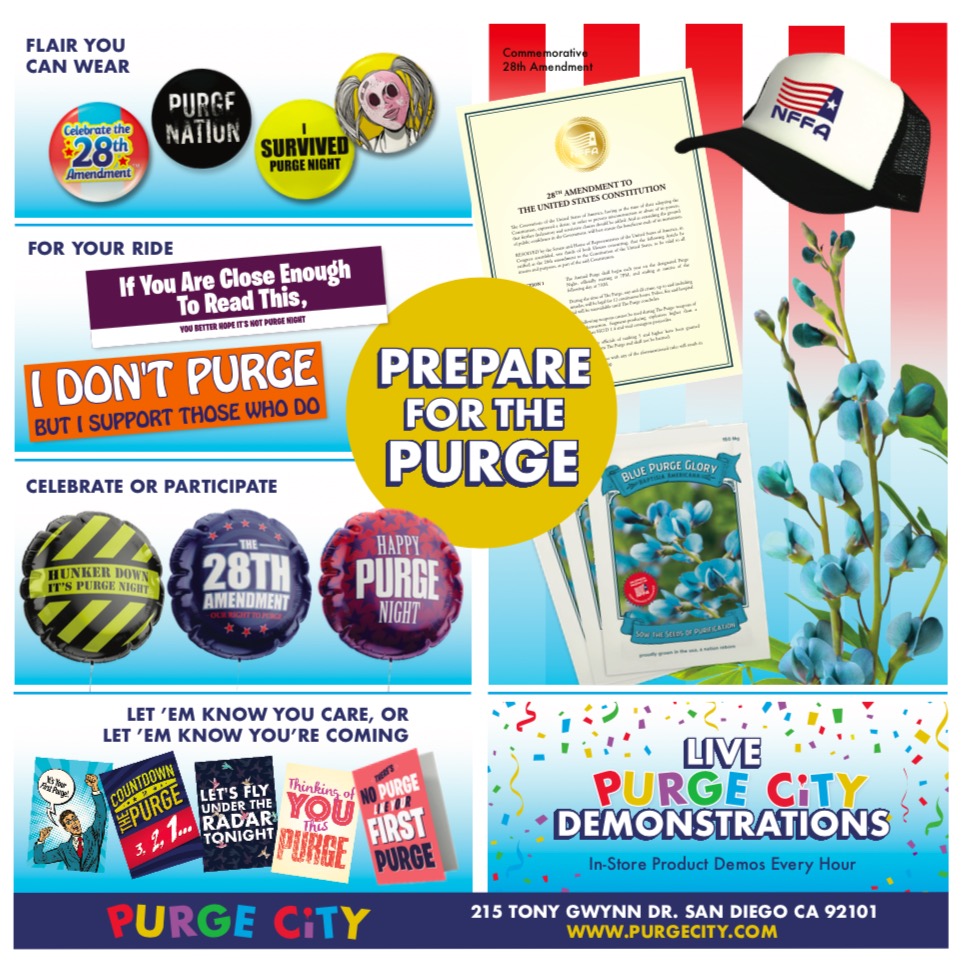 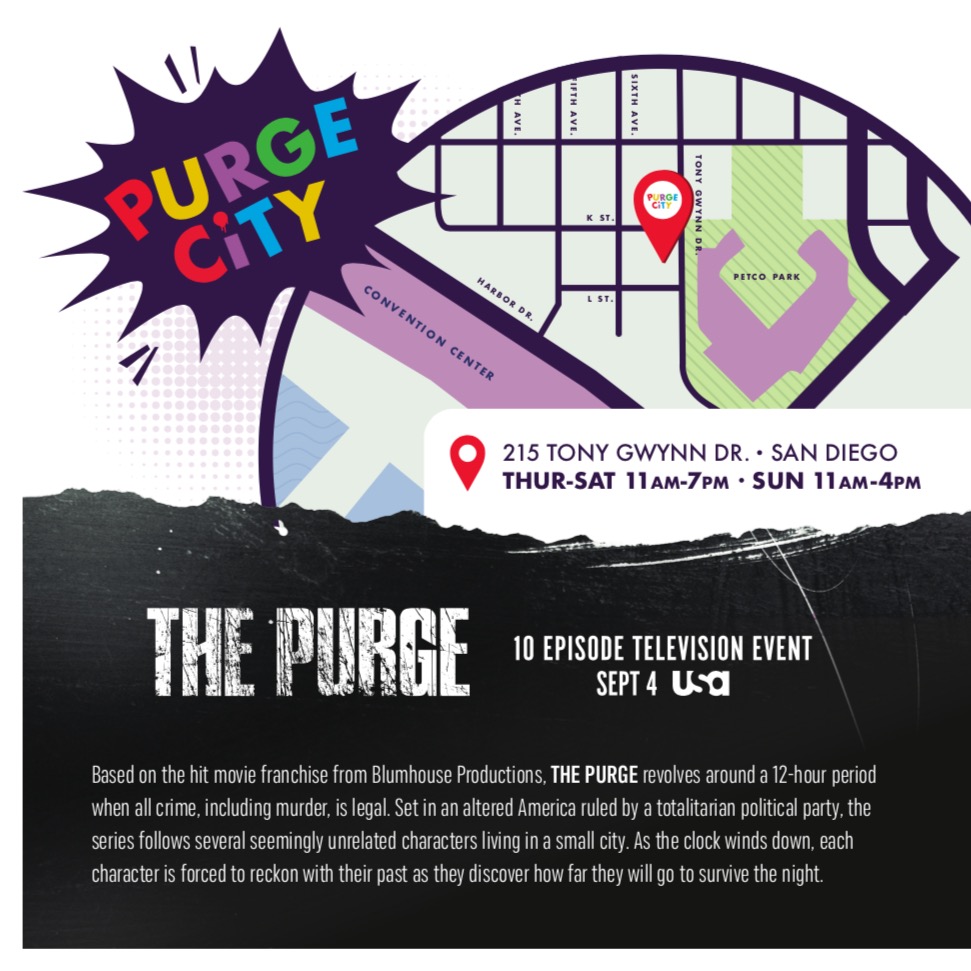 Finally, swipe or click through lots more pics below.