'The Persian' came from his own experience

An Iranian walks into a gas station in the middle of nowhere in Texas. This won't end well, will it?

In Amir Farhang's new short film, The Persian, such a scenario starts off quite as you'd expect—with the two Texas buddies in the establishment making their ignorance plain from moment they open their mouths. And yet, by the end, all parties manage to come to an understanding. In fact, it turns out most of the anger that's churned up won't be directed at our visitor at all.

Check out the film here:

Farhang—whose ad credits include "World's Toughest Job" for American Greetings and three recent Nike mini-docs with Kevin Durant—tells Muse he came up with the idea a few years ago. It was based on his own life as an Iranian growing up in America.

Even the setup was based on a specific experience.

"I briefly lived in Austin, Texas, and stopped at a gas station 40 minutes outside of the city," he says. "When you're in the middle of nowhere in a red state, you're reminded that you don't look like everyone and actually feel the stares of judgment."

Farhang originally wanted to play the Persian himself. "The two guys were going to kick my ass after they asked what football team I liked, which is the Raiders, by the way," he says. But then he met Ali Washnevsky—who played a Muslim neighbor on the Roseanne reboot, among various other TV roles—and rewrote the part for him.

"I knew he could carry it, and he has such a gravity to his presence," says Farhang.

The premise of the film borrows from classic Westerns, "where a mysterious figure appears from nowhere, from a place we don't know and we care very little about—the town only asks why he's here," says Farhang. "In those films, the cowboy always comes in, fixes what's wrong, and then rides off in the sunset. In a way, that's kind of what Ali's character does here. However, he never raised a six-shooter or his voice while doing so. Also, whoever said a cowboy couldn't be Iranian?"

Farhang's experience working in advertising informed some of the film's dynamics, too—where the latent tribalism is concerned.

"The connection to why people fall in love with brands became an easy parallel," he says. "Why people are Ford people, or Sunni Muslim, usually is tribal or a family choice. We don't even know why—we just like what we like." 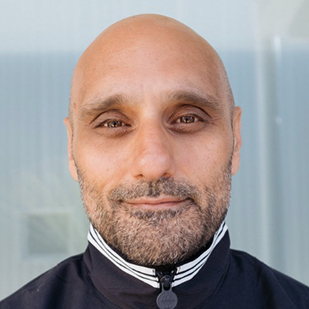 The crew shot the film in six hours at Four Aces out in Palmdale.

"I wanted to make sure the location represented an America that we supposedly have moved on from," Farhang says. "However, a lot of the social and diversity issues we faced 40 years ago and supposedly solved still remain. Sadly, it took the election of Donald Trump to wake up the 'woke' who might have been blind to the fact that this country has always suffered from a racial divide."

Still, the film has a pretty optimistic view of humanity, despite the dark turn America has taken lately. It ascribes Islamophobia more to misunderstandings, which can be resolved through education—even through everyday conversations—than to some all-consuming fear and mistrust of the other.

"As I was writing it and sharing it with people, I realized that the notion of hate and ignorance is mostly self-inflicted," Farhang says. "We're influenced to hate people we don't even know, and in the film it was important to reveal that the biggest difference the two white guys had was actually with each other. So it was important that Ali educate with facts, which results in the two antagonizers turning against one another and forgetting the initial confrontation."

More broadly, he adds, "we're often at odds with an enemy we know very little about, nor are we educated as to why that 'enemy' even exists. Usually the enemy has been created by our government's own self-interests."

Farhang's personal point of view on the issues raised here is perhaps reflected best in the comic scene that runs in the middle of the credits.

"The two guys learn something. The whole thing is a constructive conversation," he says. "Acceptance comes through a healthy dialogue from both sides. If we exercise patience and compassion and aim to educate with our words, we might move closer towards a solution."

That's a refreshing take—perhaps even a contrarian one in these days of extreme partisanship and alternative facts.

"I have no choice but to be optimistic," Farhang says. "I love this country and what it's afforded for me and my family and still believe in the good in humanity, as hard as it can be sometimes."

Written and Directed by Amir Farhang