Campaigns for Us, A Star Is Born and Joker Win Grand Clios in Theatrical Marketing

Marketing efforts for four films—Us, A Star Is Born, Joker and Godzilla: King of the Monsters—took home Grand Clios in Theatrical at the Clio Entertainment Awards on Thursday night.

Us won for Integrated Campaign; A Star Is Born won in Audio/Visual Mixed Campaign; Joker topped the Teaser category; and Godzilla won for Display.

Take a closer look at each campaign below.

Universal Pictures' integrated marketing campaign transformed and elevated Us from an original horror movie by Oscar-winner Jordan Peele into a ubiquitous pop culture event and one of the most successful original film releases of the decade. The integrated campaign included audio/visual, digital/mobile, experiential/events, key art, original content, partnerships and collaborations, public relations and social media.

A Star is Born, 'Moments'

After the initial trailer launch, the next phase of the campaign focused on what became known as a series of trailers called "Moments." These included spots called "Time," "Story," "Tell Me" and "Beautiful." The idea was to construct a series of moments, supported with montage, that represented the film in a raw way, and showed that the movie had the goods without typical trailer tricks.

The "Moments" trailers were released theatrically and online and and could be watched individually or as a series. They become the basis for shorter iterations in television. This style, and the raw representation of the material, further carried the campaign into television and then to the awards campaign.

One of the great teaser trailers of recent years, "Maybe Tomorrow" was shown at CinemaCon on April and rolled out online on April 3. It was an instant sensation.

A 70-foot inflatable Godzilla head burst through the roof of the iconic Hollywood Cinerama Dome is this crazy display work from Drissi. Equally remarkable at night, smoke effects and 12 giant spotlights generated over 3.6 million lumens, which brought Godzilla's atomic breath beaming into the night sky and could be seen for miles. The prop weighed over a ton and was surrounded by 35 individual pieces of destruction. 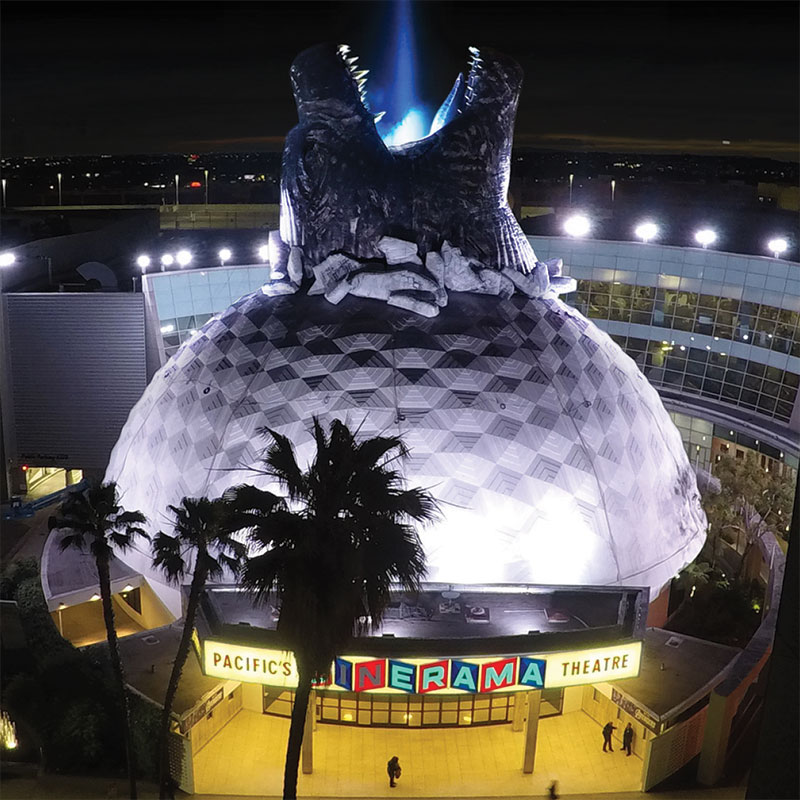 Godzilla was fabricated using over 26,000 square feet of fabric print. Over 1,200 man-hours were put into research, design and fabrication. Keeping Godzilla pressurized required 10 industrial-grade fans pumping 35,500 cubic feet of air per minute. Godzilla's mouth was 40 feet across on the inside and housed a 34-foot diameter truss system that served to both secure the inflatable and as a platform for the lights. Each light was pulling 7,000 watts and shined over two miles high.

In addition to the four Grand Clio, a total of 26 golds, 113 silvers and 122 bronzes were awarded in Theatrical. See all the winners here.