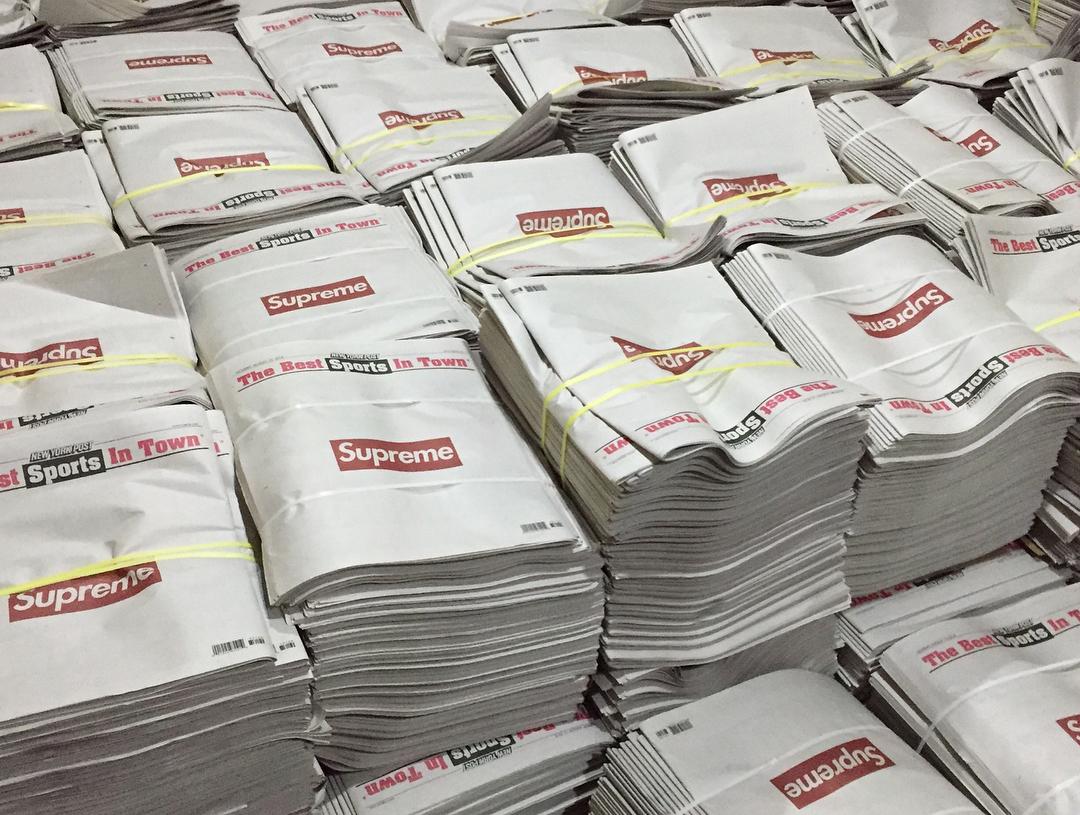 When's the last time you wanted a newspaper this much?

New York commuters got a fun surprise two Fridays ago: Newsstands were packed with editions of the New York Post, its front page blank and branded with streetwear brand Supreme.

Supreme released a video last Monday to promote the partnership.

To understand what makes this collabo so special, it helps to know a few things about both companies.

The New York Post is a brand in its own right; it literally screams headlines at you in all caps, like a friend on WhatsApp trying to make sure you get just how pissed they are.

Sometimes the headlines shock, proper tabloid-style; sometimes they express things that no longer merit subtlety. Sometimes they move us. And they're replete with puns, which manage to be clever while punching below the belt. It's populist candy, a living tribute to its incendiary creator Alexander Hamilton, the founding father who embroiled himself in the country's first political sex scandal with something he published himself.

We wouldn't call the New York Post the voice of our collective conscience. But its headlines are one of the voices that form the running narrative of our culture, nearly as old as the country itself.

Meanwhile, Supreme has a voice all its own—one that, like the Post, rides cultural waves to make a name for itself.

MediaLink's Michael Miraflor once said luxury brands are no longer a marker of luxury; today's luxury is more about how sacred brands can be customized and mashed up—a kind of desecration that finds roots in the ultra-rich monogramming their fancy Louis Vuitton luggage, but whose uniquely casual approach couldn't exist prior to the social media age.

"In a digital world of ephemeral social media, personalization of communication and modes of self-expression (including and perhaps most importantly, image by way of fashion choices) reigns supreme," Miraflor writes (tossing in a perfect mention of "supreme") while reflecting on a visit to Colette in Paris, where artist Blair Chivers was live-customizing whatever the hell people wanted.

"The screen prints started to look like IRL (In Real Life) Snapchat filters," he writes. "I asked an early 20s-something customer who chose to screen print on a VERY expensive leather jacket why he was compelled to do so, and he answered, enthusiastically, 'A lot of people have this jacket. But now only I have THIS jacket.' His friends looked at me quizzically, as if I should have known."

Supreme is the ultimate example of this culture. Its collabo with Louis Vuitton last year, which sold like lightning and commanded ridiculous resale prices, is the sexiest LVMH has been in a long time; the brand even credited Supreme for an unexpected rebound in profits. And what was it? A much sexier, more urban and relatable brand marking territory on another brand that once stood for something costly, inaccessible and timeless—the same way we all hope to make irreverent marks on hallowed institutions we're perhaps outgrowing.

You might say, "Sure, but this is an old story. I mean, remember LV x Murakami?" The difference is that Supreme isn't an artist; it's a streetwise sports brand that's made an upscale cultural mark by pissing on hydrants held dear, like Banksy for retail.

The New York Post is now one of those hydrants. As High Snobiety faithfully notes, this is the fourth-largest American paper, with a circulation of almost 425,000. Today it's owned by Rupert Murdoch, and mostly leans center-right. (Supreme, on the other hand, recently donated a percentage of T-shirt sales to families impacted by the current administration's anti-immigration policies; it's an administration the Post sometimes supports. Supreme has also paid tribute to former president Barack Obama.) 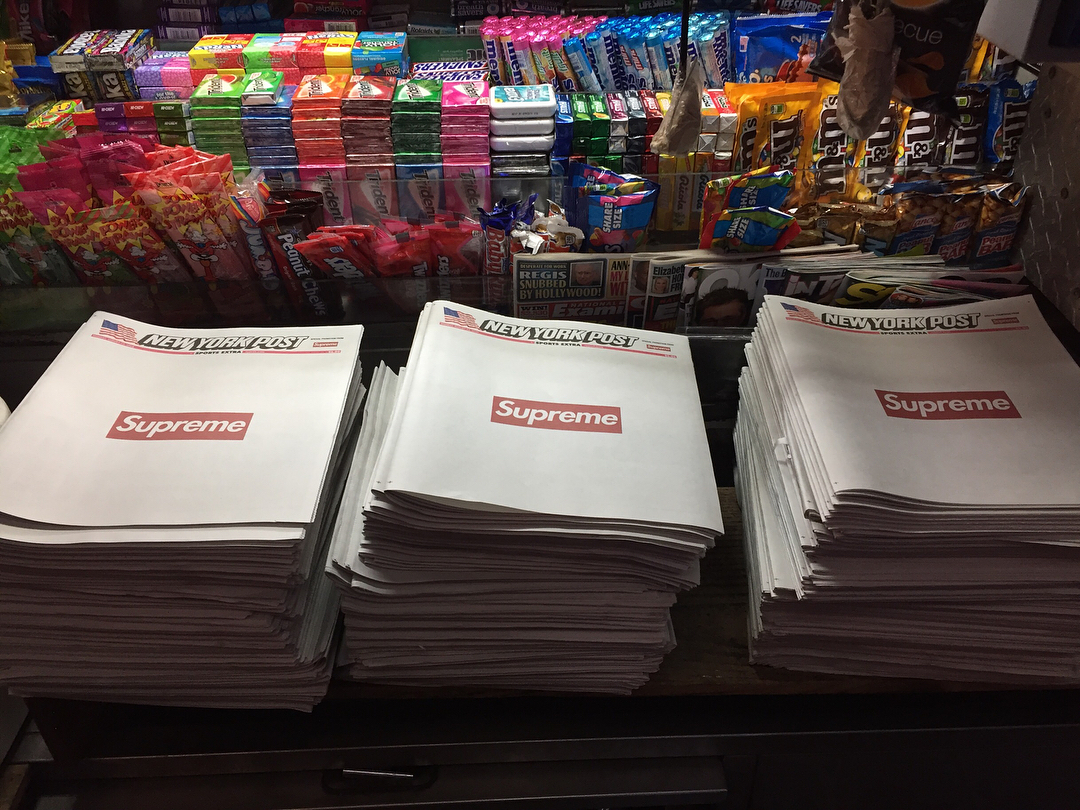 "Now, by plastering its logo over the Post's front page, you could argue the skate brand has essentially taken a piss on a publication it stands ideologically opposed to," High Snobiety continues. "A bit like graffitiing a right-wing mural. In this dynamic, Supreme is the heretic interloper that has penetrated the establishment."

The collab is simple enough. The cover still includes the Post's letterhead but is otherwise blank but for a Supreme box logo. It's supported by a digital rollout of Supreme's FW18 lookbook—driving the social media sphere into a hot tizzy, making this a win both online and offline.

The edition of the Post started selling out pretty much immediately. As of last week, resold copies retailed for up to $46, well over the Post's cost of $1.50. But for Supreme fans who just want to have something of the brand, it's still cheaper and more readily available than most of Supreme's other products or collabs.

When was the last time anybody hankered for a newspaper, a slow-news medium that's the total antithesis of hysterically up-to-moment data consumption?

This probably won't change now-entrenched media habits, but it perhaps sends a message about how we value the ultimate luxuries—our time and peace of mind.