Gucci Asks Girls to Pin Dreams to the Sky. That's Not Nearly Enough

The trouble with Chime for Change's new project

In 2013, Gucci started Chime for Change, a global campaign to support gender equality. It has raised over $15 million to fund 430 projects in 89 countries, apparently benefiting over 570,000 women and girls globally.

That is admirable (though to be honest, I still don't totally forgive them for "Gucci Dans Les Rues"). Chime for Change's latest campaign includes an immersive experience created by LOW, and short film called "Sitara," a name that means "star" in Hindi.

SITARA | In Collaboration with CHIME FOR CHANGE

The trailer, which looks like it belongs on a Pixar reel, introduces us to a girl who's clearly having an awesome cross-cultural life. But in the background, a shadow lingers: Her older sister (we're guessing) is having a far bleaker time. By the end of the trailer, we discover she's preparing for an arranged marriage.

The piece was directed by Sharmeen Obaid-Chinoy and is hashtagged #LetGirlsDream. It's accompanied by letgirlsdream.org, which features a sky full of stars that are actually the dreams of real-life girls and women. 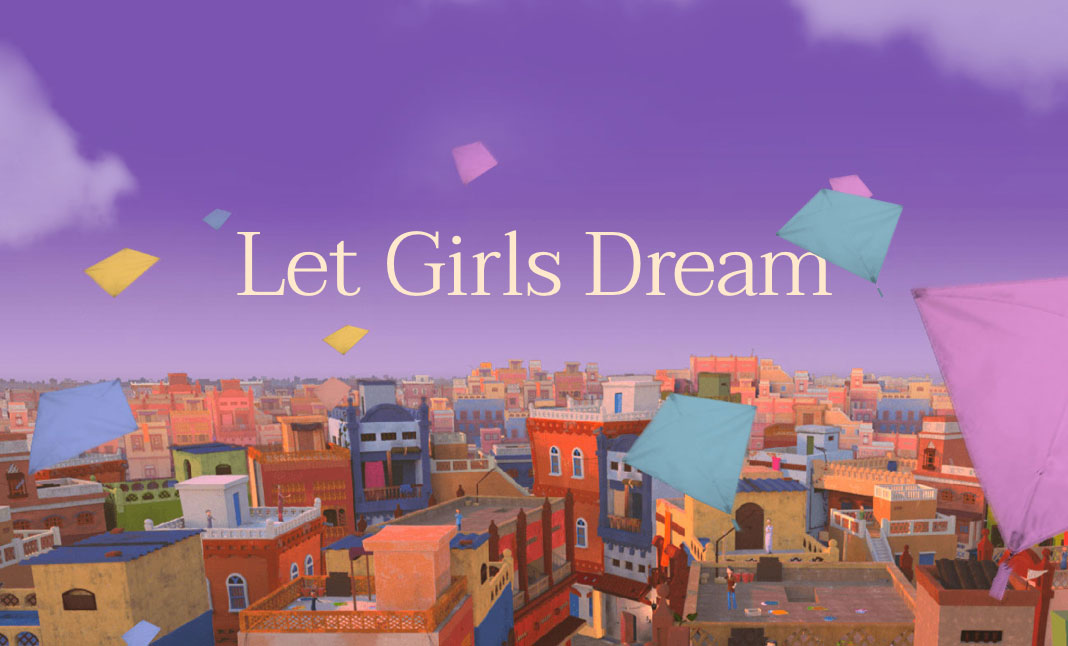 You may add a star if you wish.

Look, I appreciate that. Since #MeToo and all the pooey scandals that have come to light, there's more awareness in the hivemind about the unending bullshit party that is growing up female.

From age 6, we stop believing we're as smart as boys. We've been pushed out of prominent industries we built, our contributions systematically sidelined, making it even harder to dispel or combat that belief. From the moment some well-meaning relative goes "Who's the pretty girl?!" we'll be objectified and sexualized, then tacitly asked to be more childlike, which is both confusing and creepy.

But you know all this already, so I won't dwell on it. "Let Girls Dream" is cute, well-meaning work, like that thing Always did where it had girls beat the crap out of boxes that represent fears.

Those people don't need to feel better. They probably already feel great, because they have money to spend on stuff like this.

Women and girls have been disenfranchised and treated like trophies, sex cows or sweet dollies for generations. It is reinforced in our dominant religions, mythologies, laws and social systems. It is condescending to imagine you're empowering girls by asking them to inscribe dreams into a digital sky, or punch a box with "BULLIES" written on it; it has never remotely approached solving a problem, any problem.

In fact, it makes things worse—by further infantilizing us, signaling that, when our bitching is through and the whining to go to school is over, this is actually all we need: validation and purple.

Ta-Nehisi Coates once implied that hope is not the gift our kids seek—especially when they can already recognize injustice, which happens way earlier than most parents think. "I don't think, even at that age, I was looking for hope from my teachers. I think I was looking for enlightenment from my teachers," he said. "Give me the tools. Arm me. Allow me to be able to understand why. That probably would be more important to me. That's not hope."

In a month, we will forget having added a star to LetGirlsDream.org. But maybe some girl out there won't, and she's going to need more help getting out of her crap situation.

Help her by funding infrastructure in her community. Help her by standing with her, and fighting with her, in wretched situations where she's asked to stand and fight alone. (Chances are, especially if you're a dude, your voice will matter more than hers will.) Help her by questioning—and dismantling—laws and mores that make her hate her body. Help her by being one of the forces that transfers power from the dominant culture to her hands.

There is a wonderful classic of systems design called The Limits to Growth, by Meadows, Meadows and Randers. People troubled by the state of the world (or perhaps especially those who aren't) should read it. The premise is that our systems are designed to facilitate growth, so when growth happens, it happens exponentially. Thus our populations expand exponentially, and with that our consumption and waste, further contributing to the ravaging of the planet, other species and ourselves.

It is a suicide system.

To stop it, it helps to look at what makes local populations grow more slowly. It's commonly thought that more money, well distributed, contributes to fewer overall births, but that isn't true all the time.

"More important predictors than GNI [gross national income] per capita are factors such as education and employment (especially for women), family planning, low infant mortality, and relatively egalitarian distribution of income and opportunity," the authors write.

"The factors believed to be most directly important in lowering birth rates are not so much the size or wealth of the economy, but the extent to which economic improvement actually touches the lives of all families, and especially the lives of women." (Emphasis ours.)

All this to say, stop with the purple. Create, instead, an environment where girls and women can project themselves into the future, able to manage their bodies, money and minds with the breathtaking freedom most often reserved for their Y-chromosome brethren.

Gucci, consider this my star.