Will You Commit to 13% Black Leadership at Your Agency?

Black creative collective Three's a Crowd is challenging the advertising industry to boost Black leadership to 13 percent by 2023.

Currently, Black people comprise 13 percent of the U.S. population, but just 8.1 percent of the agency workforce. And Three's a Crowd estimates less than 2 percent of senior roles are occupied by Black professionals.

That just doesn't add up.

So, in an initiative timed to the 155th anniversary of Juneteenth on Friday, when Americans celebrate the end of slavery on our shores, the group is asking agency heads to sign its "In for 13" pledge—committing to 13 percent Black leadership by 2023. 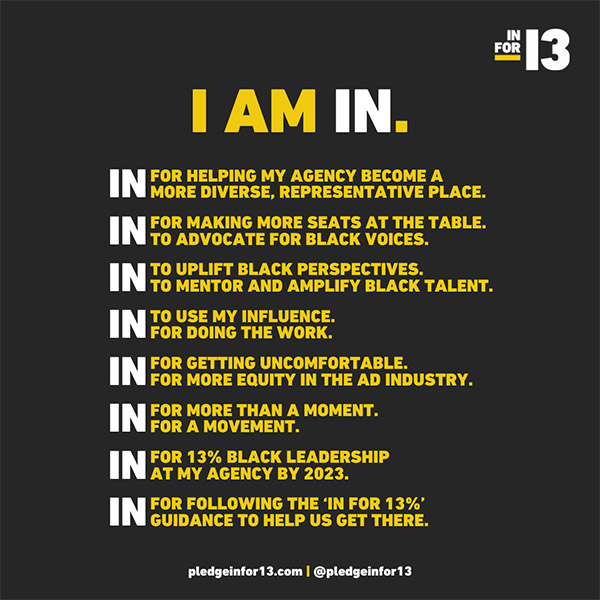 "One of our long-term goals has been changing the faces and voices of industry leadership," Reonna Johnson, co-founder of 150-person Three's a Crowd, tells Muse. "[More recently] we asked ourselves, 'Why isn't this a short-term goal?' The long term has a funny way of disappearing into the horizon."

After signing the pledge, agencies will be asked to provide a breakdown—or at least a photo—of their leadership team. Three's a Crowd will develop toolkits to help these shops tackle bias and track their progress.

The initiative marks another push for equality and meaningful reform amid civil unrest over racial violence and police brutality. Last week, 600 Black members of the ad community signed an open letter to agency leaders demanding an end to "the systemic racism that is afflicting our industry." Separately, creative collective Saturday Morning issued a missive calling on white Americans to dismantle oppressive systems and not just pay lip service to the cause.

UPDATE, JULY 6: So far, 32 agencies and 67 individuals have taken the pledge. Three's a Crowd is posting updates here, and sent pledgers an email, outlining initial steps to take.

"We've even had a few one-on-one conversations with agency senior leaders to explain the steps and what to expect, which has really helped us hear the concerns of senior leaders," Johnson says.

Below, Johnson chats with Muse about "In for 13" and discusses the state of race relations in the industry. 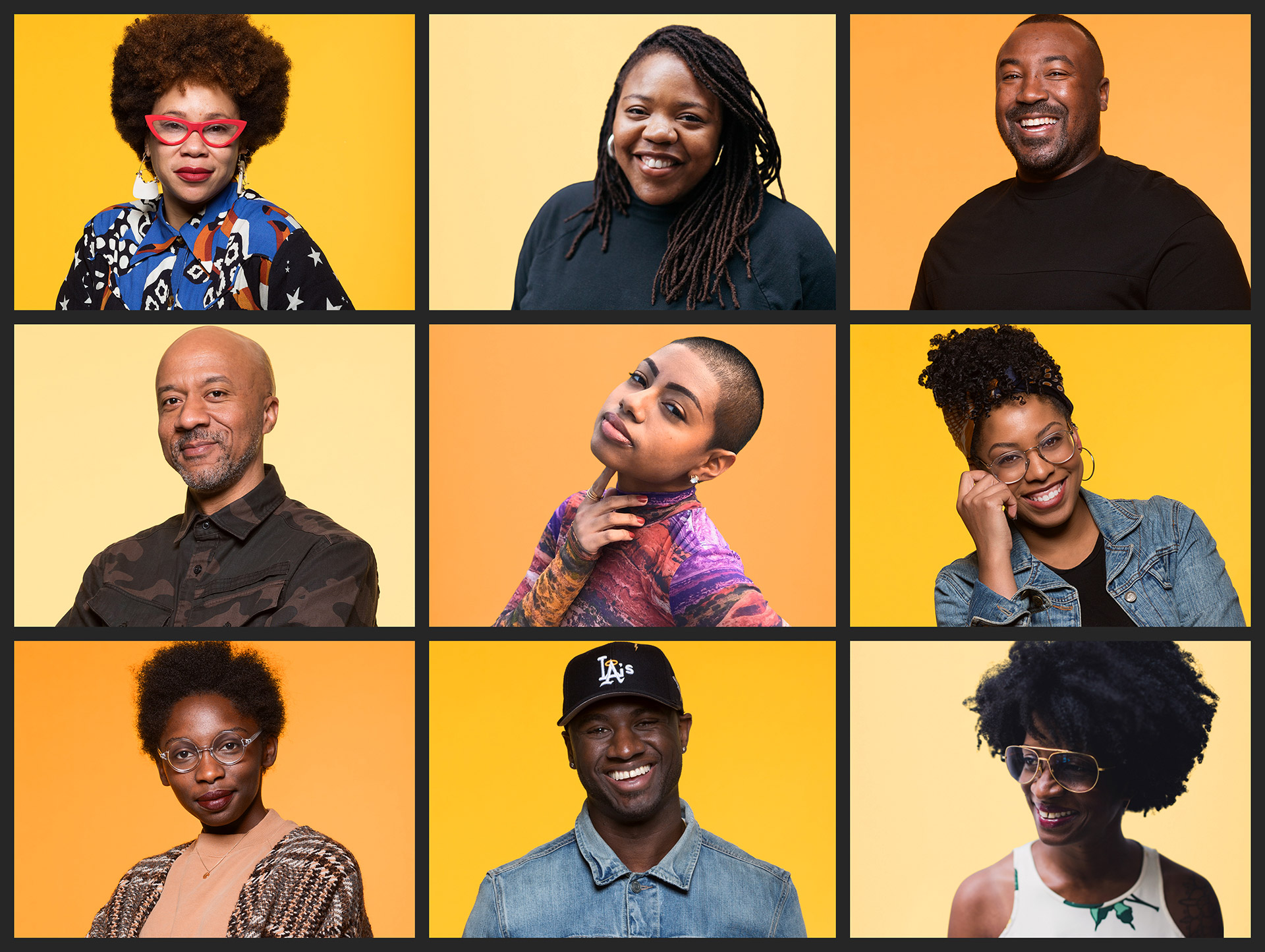 Muse: What was the genesis of the idea?

Reonna Johnson: The Three's a Crowd community meets monthly. The conversation naturally moves from industry subjects to the state of Black America as a whole. The two are interrelated. Of course, we've been following the murders of Black people for years. But this time the energy on the streets was different. We felt it, and responded to it.

It came from a demand that's been years in the making, not just weeks. I think this is the important fact: There's nothing new about what Black Americans are demanding, in society or in advertising. There's no novelty to our demand. Only urgency.

How'd you put the plan together?

I am a new-business director, and accustomed to quickly assembling multi-disciplinary teams in pitches. In the room we had:

• 1 strategist, to own the over-strategy and brief
• 1 researcher, to get us smart on the problem
• 2 art directors, to create a visual vocabulary for all campaign elements
• 2 copywriters, to crystallize the story
• 1 video producer, to bring the video narrative to life
• 1 music producer, to give the movement its proper soundtrack

Overall, the ideation process was handled like a pitch, with a two-week deadline. We brought the skillsets we use to navigate our day-to-day work in advertising to bear on this social crisis. The breakthrough came when we aligned on one insight: Nothing tells the story of racism in advertising as starkly as the numbers themselves. All you need to see is a single percentage to know where the problem lies, and how to solve it. So, we centered the campaign around cold, hard, unforgiving data. Once this focal point was clear, the creative team wrapped it in the perfect rallying cry: "In for 13."

How does that approach work to your advantage?

Our focus was to treat this like a business problem. With any business challenge, you first have to get clear about where you're at, where you want to go, and how you want to get there. Unfortunately, this level of rigor, accountability and hard quantitative goal setting is typically what's missing from diversity/inclusion programs. Racism is an institutional problem, and solving it requires an institutional solution. To make progress, initiatives need process and measurable progress milestones. Sequencing helps people feel accomplished, and clear goals help us stay focused. As each agency dives into the phases, it'll help institutionalize the process moving forward. Agencies will have toolkits to continually use, so there's no excuse to not keep the momentum going.

To put it bluntly, why should white management be interested in making this commitment?

Because the eyes of the world are on those in power, from the halls of government to the C-suites of the private sector. The streets will not be silenced. This movement isn't losing steam or going away. If anything, every day we gain momentum. So industry leaders have a choice: Pledge to do better in real and measurable ways, or answer to the whole world for their failure. Either way, there's no hiding.

How will you share the message and get the word out?

Through ally groups and social channels, both those specific to our industry and more broadly open to the community.

We plan to celebrate them on our site and other social channels. I'm hopeful of 20 or more.

The Ad Council and holding companies preach about diversity all the time. And yet it never takes hold. Why is that?

No accountability, no consequences if it doesn't happen, and no one is truly measuring the progress or lack thereof). Also, the approach is wrong. Most initiatives start from the bottom in hope of grooming younger people into leaders. "In for 13" takes the opposite approach, focusing on the leadership tier first. Black people need to be in leadership roles that have equity, which can shift the direction of recruitment within an agency.

Are there some industry efforts that you really respect? Why have they worked to some extent?

The 3% Conference is an industry effort we truly appreciate. They knew the number of women in creative director roles when they started—3 percent—and now, nine years later, we are at 11 percent. Their message and goals were aggressive but simple: Change the ratio of men and women in leadership. What hasn't worked is, when the focus was on gender, race gets put on hold. Seems like industries can only handle one movement at a time. Seems too difficult to combat systems of oppression in parallel paths.

Are we really on the cusp of meaningful change in combatting systematic racism?

Yes, we are, but ONLY if we remain fearless and seize the urgency of this moment. We've all seen this at agencies: folks moving fast with tons of possible initiatives to tackle "diversity and inclusion," but they can't identify how to get there. And as the press dies down, so will the effort. This time can be different if groups like Three's a Crowd and other efforts keep the pressure on and track the progress. We are somewhat hopeful that things can get better, but only if leadership seeks guidance from Black communities in this space. They can't do it alone. They tried that. Let's get real.