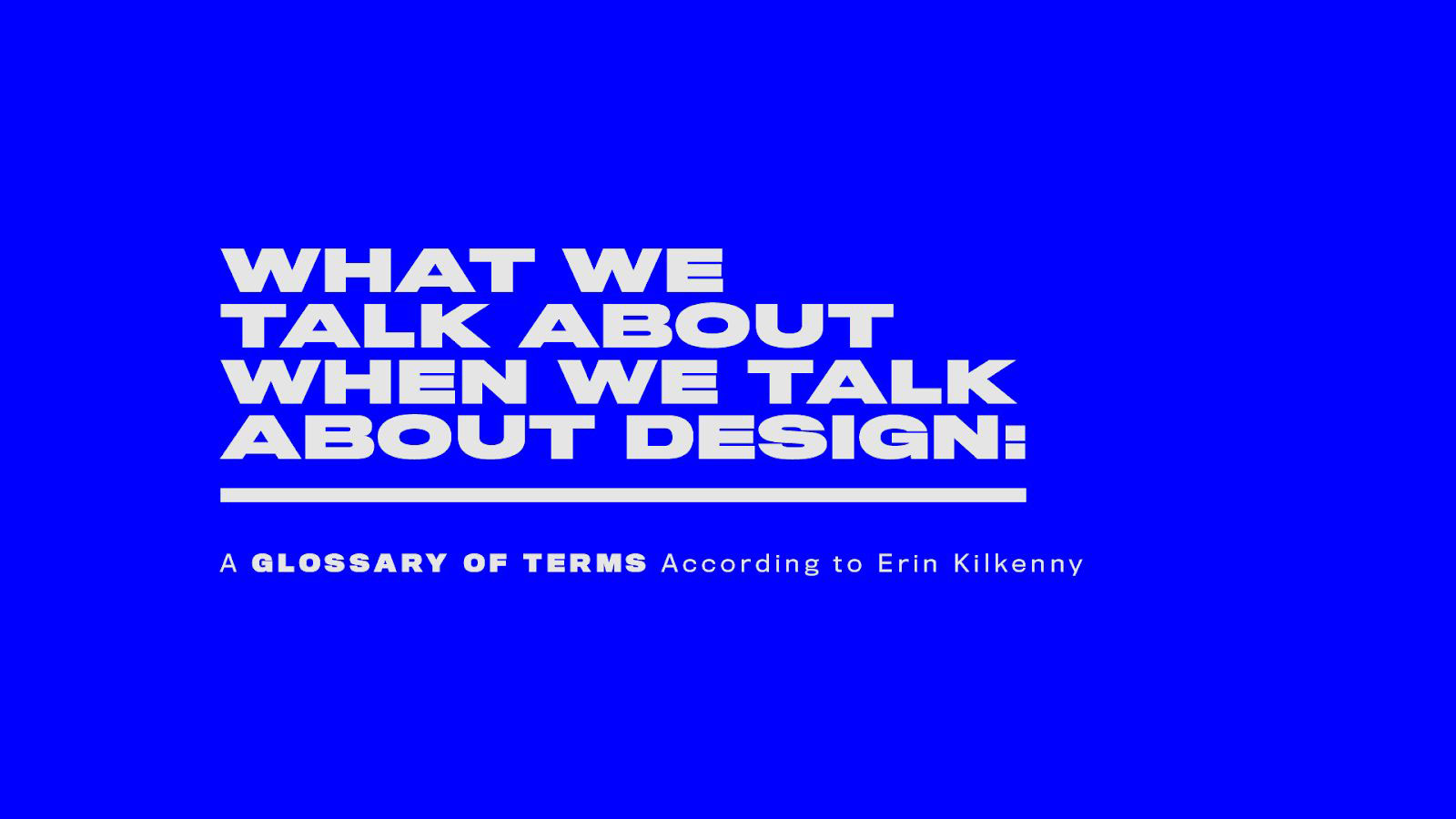 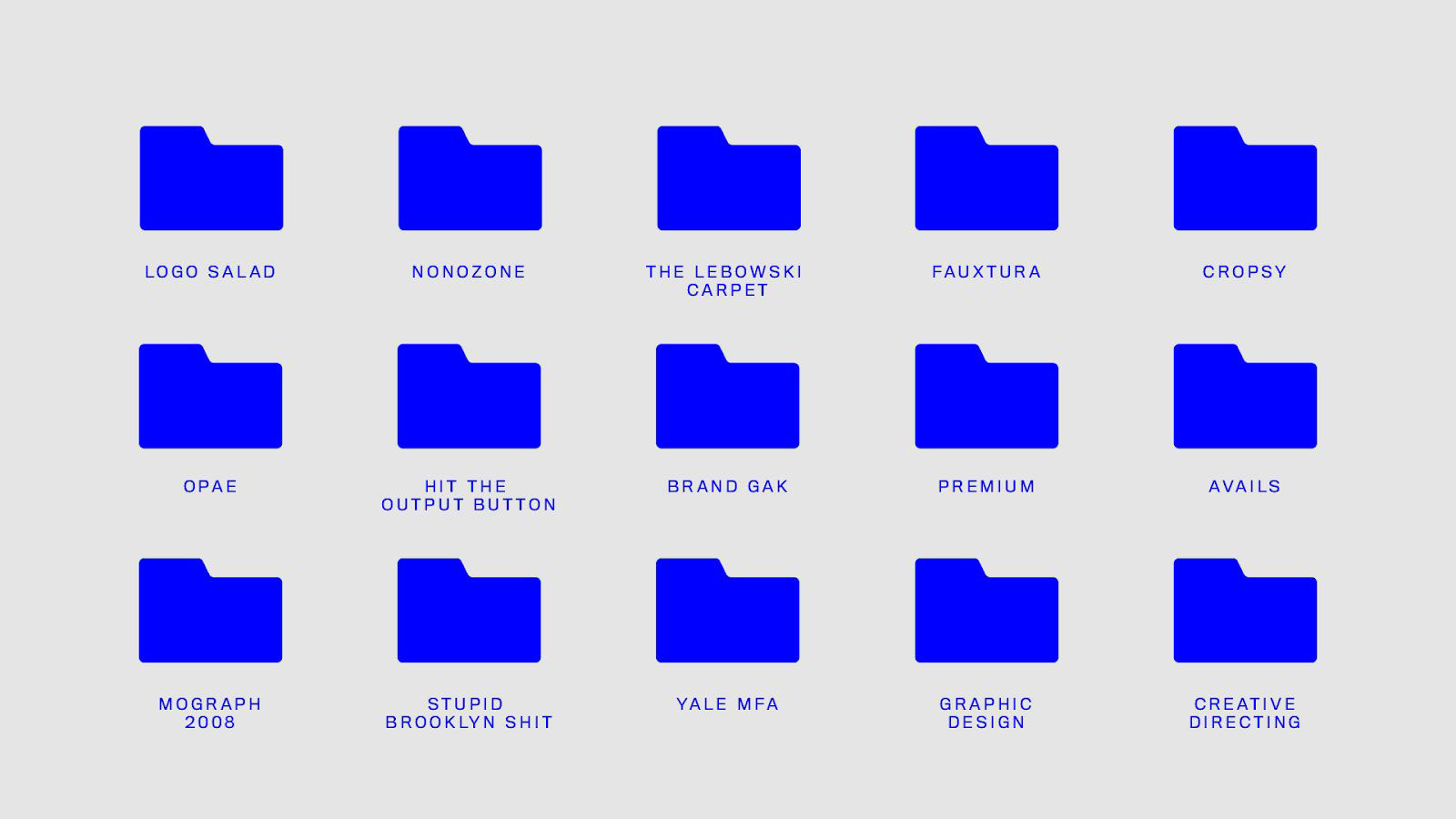 Logotype, composition, hierarchy, serif. As designers, we all have a unique vocabulary to describe the things we do ... some more colorful than others.

In the ongoing spirit of sharing, community and creative collaboration, I wanted to share a few of my favorite terms for giving direction and feedback for the modern creative. Drop them in your Zoom meeting the next time you're at a loss for words. 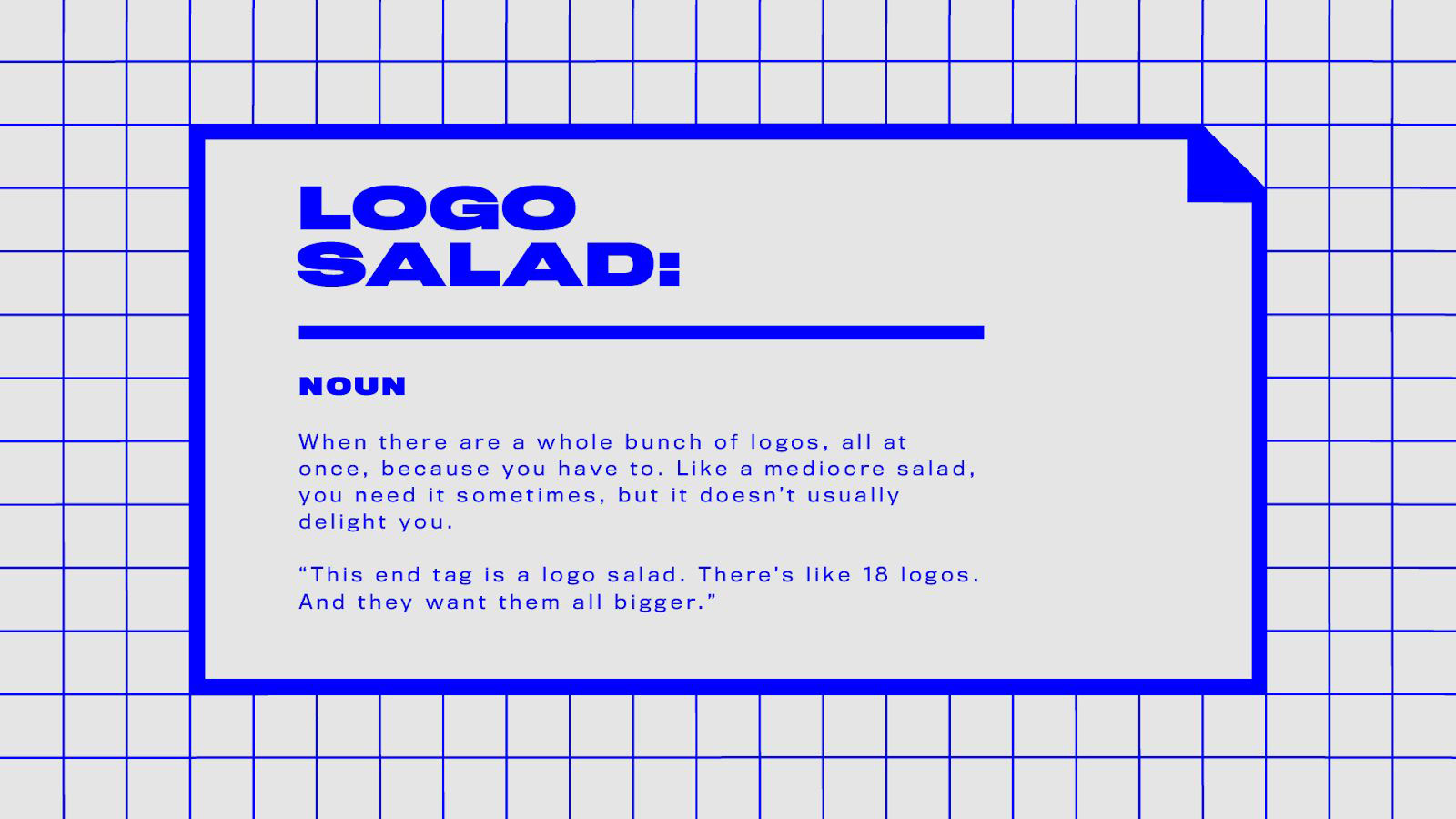 When there are a whole bunch of logos, all at once, because you have to. Like a mediocre salad, you need it sometimes, but it doesn't usually delight you.

"This end tag is a logo salad. There's like 18 logos. And they want them all bigger."

The margin or safe zone, usually around the edge of a frame.

"Oh, can you scoot that text over a little? It's in the NoNoZone."

The thing about a given design that really ties the room together.

"YES! Oh this design looks great! You did it! That pattern thing is the Lebowski Carpet!" 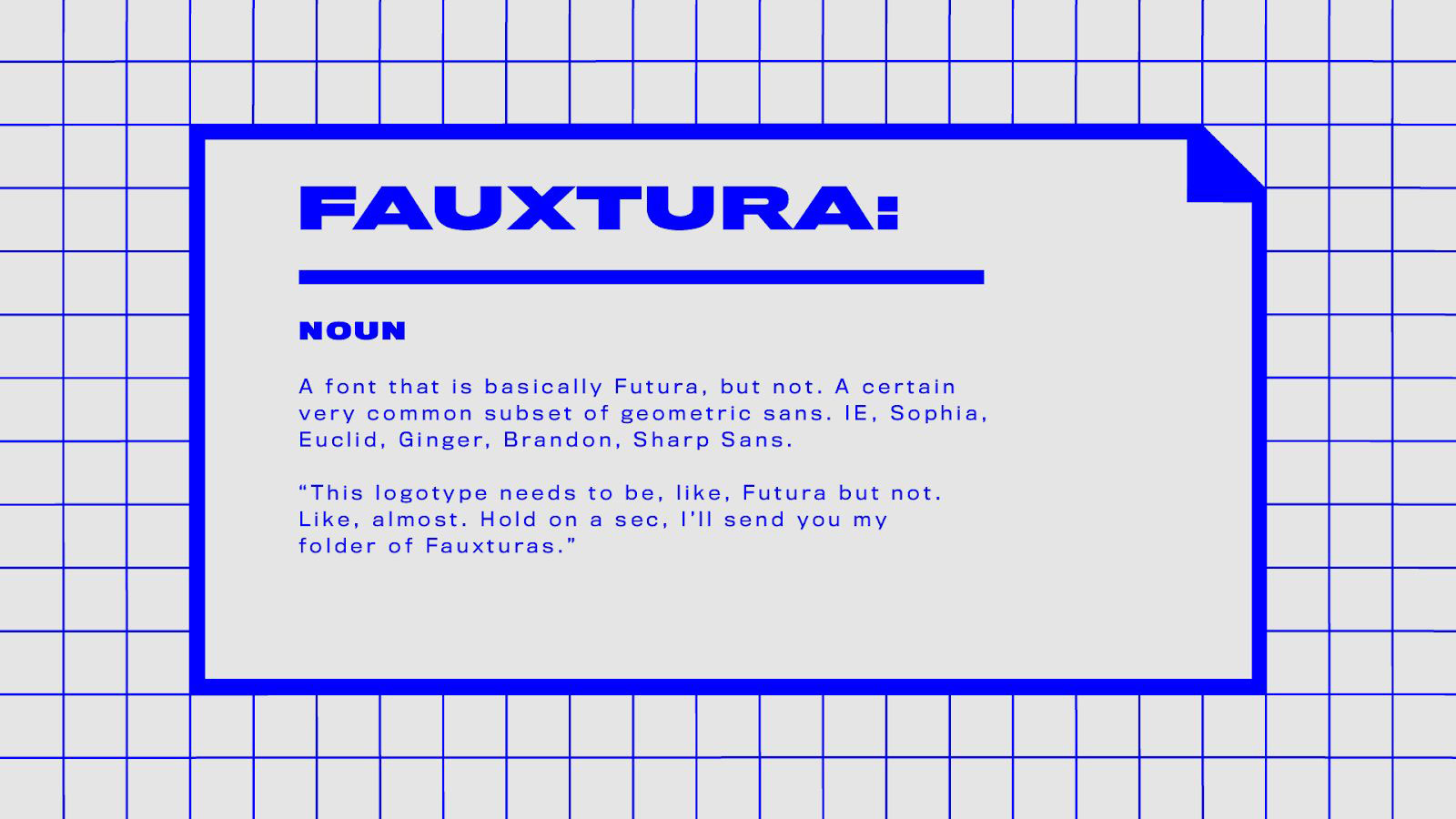 A font that is basically Futura, but not. A certain very common subset of geometric sans. IE, Sophia, Euclid, Ginger, Brandon, Sharp Sans.

"This logotype needs to be, like, Futura but not. Like, almost. Hold on a sec, I'll send you my folder of Fauxturas."

A design or design system where you take something (usually a crop of the logo, or a shape or pattern ostensibly derived from the logo or a conceptual rationale) and crop photography into it.

"I mean, we could try a Cropsy—if the logo is everywhere, everything is branded?"

Other People's After Effects.

"Had to fix a typo in that render this morning, and man, it took 20 minutes to find the layer. It was nested in six different unnamed precomps—OPAE, amirite?!? Sigh."

The highly structured process of sitting down and making a really large pile of stuff until something clicks.

"Idk guys, I think we need to stop talking about moodboards and abstract concepts and go hit the output button for a few hours. We'll figure it out."

When a lot of words are used to say nothing. Like it's namesake, Nickelodeon Gak, it makes a "fart" noise when squeezed into its container. Not to be confused with Lorem Ipsum, but has basically the same impact.

"Version 28 of the script is approved! Woo! Unfortunately it's just brand gak, now that all 18 SVPs have weighed in." 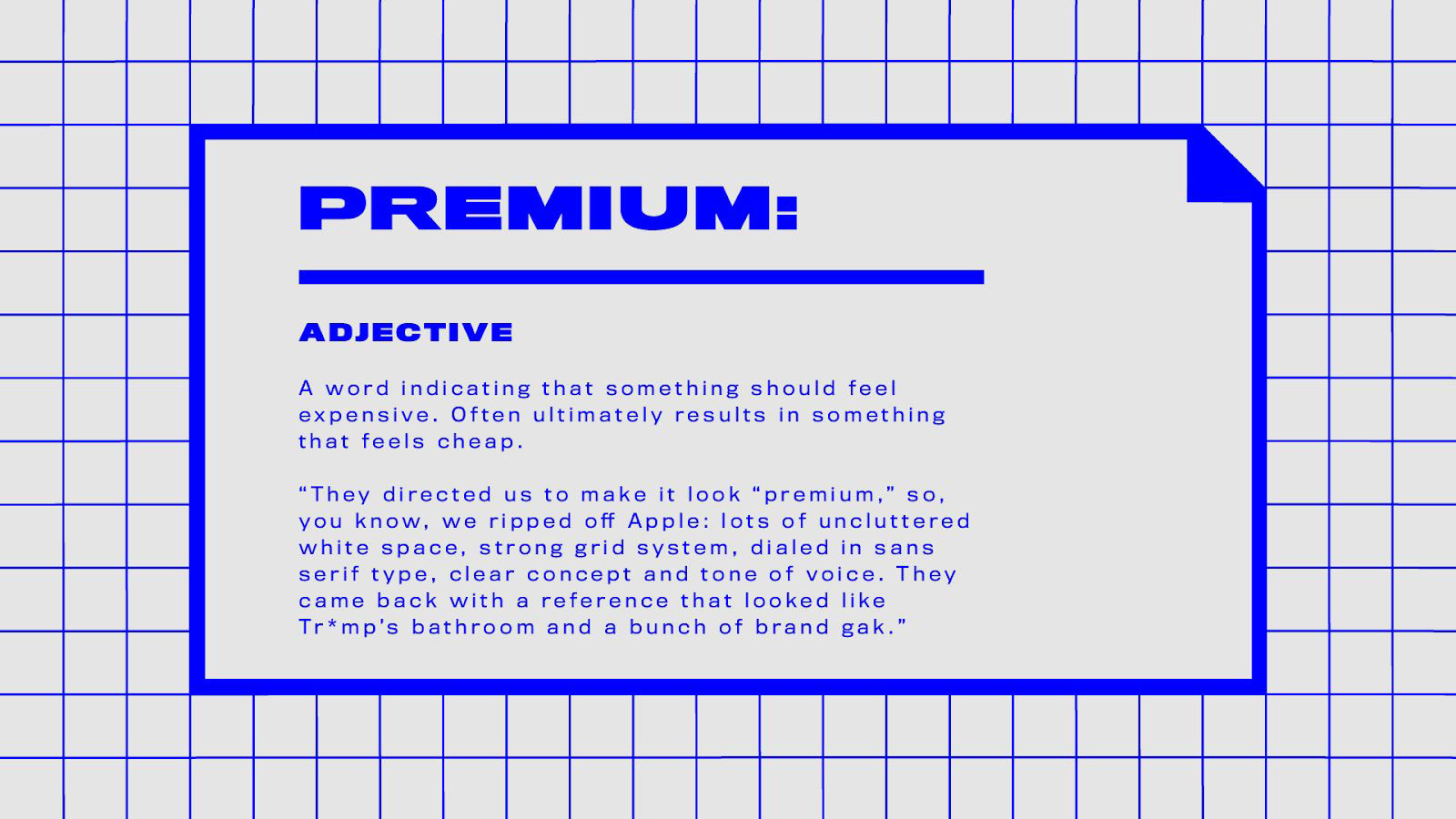 A word indicating that something should feel expensive. Often ultimately results in something that feels cheap.

"They directed us to make it look premium, so, you know, we ripped off Apple: lots of uncluttered white space, strong grid system, dialed in sans serif type, clear concept and tone of voice. They came back with a reference that looked like Tr*mp's bathroom and a bunch of brand gak."

A word that production coordinators use to ask freelancers if they're busy or not. Should be eternally banned from all communication.

"What are your avails for 12/24 through 1/1? We've got a project coming in that's super fast paced and low budget, but it should be really cool and fun!" 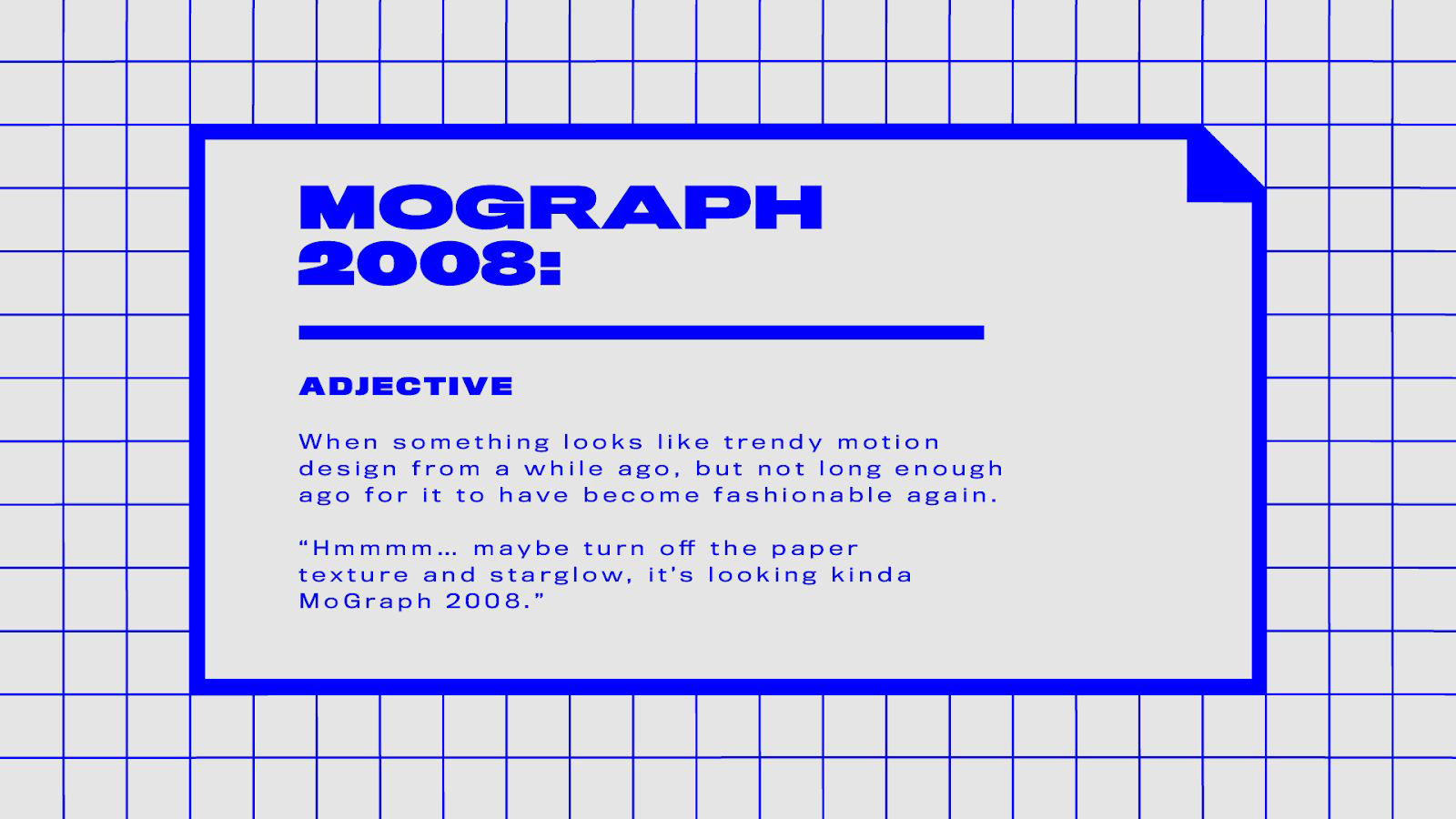 When something looks like trendy motion design from a while ago, but not long enough ago for it to have become fashionable again. See also: Stupid Brooklyn Shit.

"Hmmmm … maybe turn off the paper texture and starglow, it's looking kinda MoGraph 2008."

A logo or design befitting a $238 artisanal axe. Usually has a set of antlers, peeling paint texture, or a wood type revival font. Inspired by a glamping weekend in the Catskills.

"Did a logo for a craft brewery over the weekend. Presented a bunch of concepts but they just wanted Stupid Brooklyn Shit. Easy money, at least." 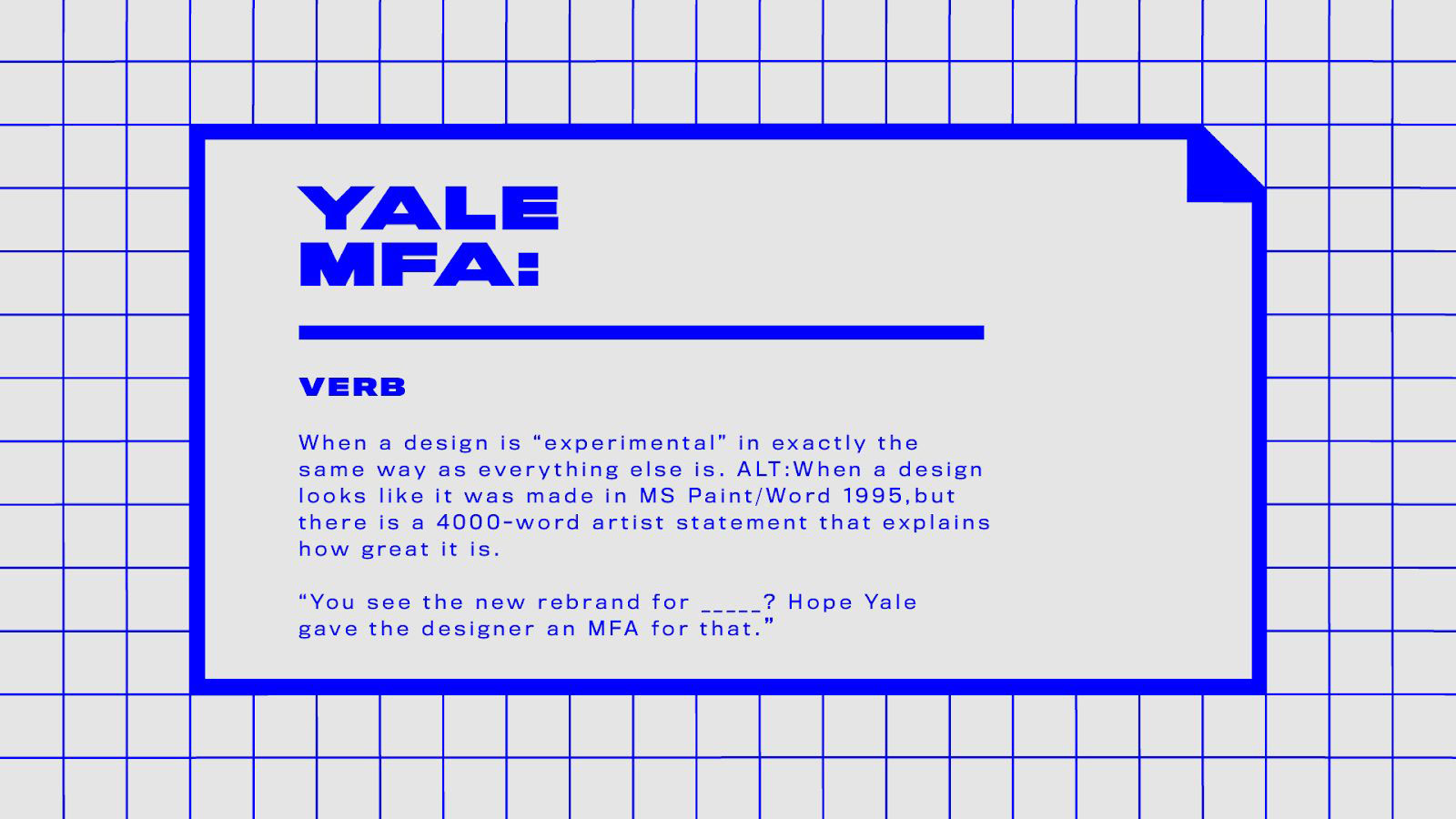 When a design is "experimental" in exactly the same way as everything else is. ALT: When a design looks like it was made in MS Paint / Word 1995, but there is a 4,000-word artist statement that explains how great it is.

"You see the new rebrand for _____? Hope Yale gave the designer an MFA for that."

Usually, the least important thing about a graphic design project.

Pointing at people's screens and saying stuff from this dictionary. ALT: Using corresponding terms from an alternate dictionary on a conference call.

"Sorry, guys, gotta cancel dinner tonight. I was creative directing all day and none of the good freelancers had avails, so now I have to stay late to hit the output button for this pitch. It's cool, though—projects are going well! Dialed down the brand gak in the copy deck and figured out the Lebowski Carpet that saved us from making something that was totally MoGraph 2008—instead of the premium approach they're expecting." 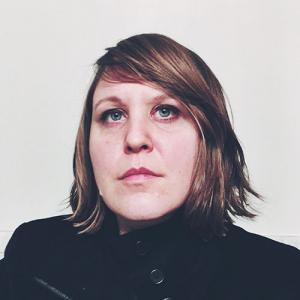